Put simply, we haven’t seen a crisper, cleaner, more textured image on a projector costing less than five figures – never mind one that’s under £5,000. The 4k e-shift 2 system does a truly terrific job of doubling the picture’s pixel density without making the image look artificial or noisy.

In fact, you rather get a much stronger sense that you’re looking through a window rather than watching a non-retina level imaging technology. Or perhaps it would be more accurate to say – given how well it helps capture the sense of grain you get with many films – that e-shift helps the X55’s pictures look remarkably like those you would see on a huge projection screen at your local cinema.

Impressively the e-shift system achieves its pixel density boost without negatively impacting the projector’s motion handling with processing artifacts. The slight stutter and occasional double imaging noted in 3D mode just isn’t a significant issue with 2D material, and there’s hardly any motion blur even during the fastest moving sequences.

JVC has provided an optional Clear Motion Drive circuit on the X55 that’s designed to reduce judder. But you don’t need it – in fact, using it predominantly makes pictures look less natural. It’s nonetheless a pity, though, that the CMD system isn’t usable with 3D sources.

JVC projectors since the HD1 have been class leaders when it comes to contrast, chiefly thanks to the way their innovative optical wire grid polarising system helps them deliver stunningly deep black levels without requiring the image to sacrifice brightness like many rival projectors do.

The fact that the X55 can deliver a claimed contrast ratio of 50,000:1 without using a dynamic iris system to adjust light levels on the fly means that dark scenes look both immaculately stable and full of the sort of shadow detail that tends to get crushed out with other projection technologies.

Also, of course, the fact that the X55’s outstanding black levels are achieved without compromising light output enables bright elements of predominantly dark scenes to remain punchy and rich. 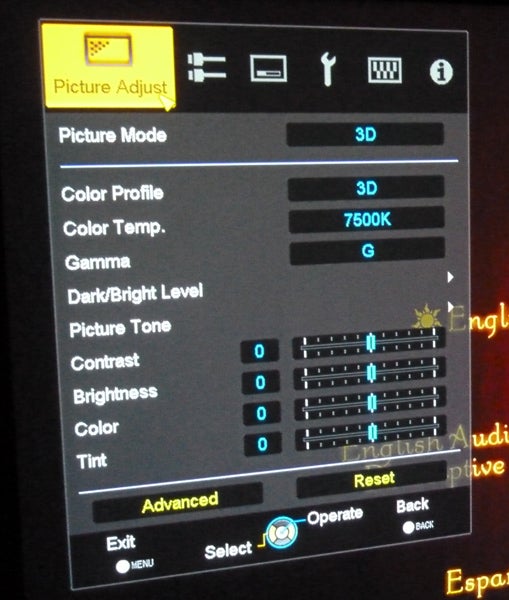 With the X55 also running remarkably quietly when using the ‘Low’ lamp setting that delivers the best colour and black level response, the only flaw we could find with the X55’s 2D pictures was that we didn’t feel entirely happy with any of the presets – even the Film and Cinema ones. They all seemed a touch too aggressive. But this isn’t a big deal when you’ve got as many calibration tools to play with as the X55 provides.

If you’ve read this whole review rather than just skipping straight to the verdict, you’ll already know that we’re just a bit in love with the JVC X55. On the other hand, if you have just skipped straight to the verdict, then let’s swiftly sum things up like this: The X55 is – with its price taken into account – arguably the most all-round desirable projector JVC has ever produced. Which by default makes it one of the most desirable projectors we’ve ever seen, period.