Let’s clear the big debate up about the X500 right away by saying that its pictures do not look like true 4K pictures. Even with e-Shift on, the Enhancement feature set uncomfortably high and using a native 4K source you never get the same sense of immaculate detail, image depth and colour blend precision that we associate with a true end-to-end 4K visual experience.

With this in mind it does suddenly feel a bit irritating again that the X500 talks about itself so heavily in 4K terms. Thankfully it doesn’t really take long, though, for us to see past this and start to evaluate JVC’s projector for what it really is: a seriously high-grade HD projector where e-Shift 3 undoubtedly contributes to its brilliance.

The main advantages of the e-Shift 3 system are that it adds a palpable sense of extra density and solidity to the image, especially if you’re using a really large screen of 100-inches or more, and that it reduces instances of jaggedness around bright contoured edges. Having less space between the pixels on the screen also seems to help JVC get more luminance out of its quoted 1300 Lumens of lamp output.

As noted in the set up section, you do have to limit the power of the e-Shift’s Enhancement element to stop pictures tipping over into noise. But even with this element toned down if you switch between on and off there’s a clear difference in the image’s sharpness with all source resolutions which, once seen, is hard to live without.

It’s worth adding here, too, that the latest e-Shift version is much cleverer than previous versions at upping the pixel density without ‘intelligently’, so that you don’t end up with some parts of the picture sliding into noise as occasionally happened previously. 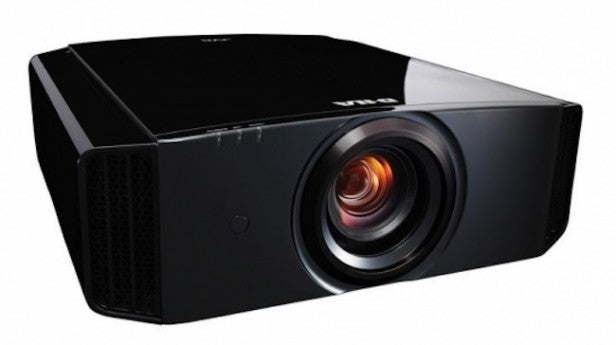 Another huge attraction of the X500 is that its contrast really is stellar. There’s still no other projector tech out there that comes close to D-ILA in this respect, as truly inky blacks are achieved without compromising the bright parts of dark scenes or, just as crucially, crushing out shadow detail. The X500R’s native contrast is so good, moreover, that we suspect many users won’t feel they need to use the new dynamic iris system given that it does marginally impact the image’s luminance stability.

To be fair JVC has done a pretty good job of implementing the dynamic iris, in that it does boost contrast even more and its impact on luminance stability isn’t as brutal as it can be with some projectors. But given how well dark and light picture elements can co-exist in the same frame without the dynamic iris in play, the dynamic iris feels more like something JVC has felt it’s had to add to compete with the fanciful quoted dynamic contrast ratio figures of some rival projectors rather than something the X500 actually needs.

Its gorgeously inky blacks prove a perfect foundation for the X500’s colour palette too, enabling it to deliver a delicious combination of vibrancy and naturalism that’s seriously rare at the happy side of five figures. As noted before, moreover, these natural colours are attainable with less calibration effort than has tended to be the case with JVC projectors before.

The X500R’s detail levels are in truth terrific, too, once you accept you’re not going to get 4K, and motion seems crisper and more natural than before on D-ILA projectors even without any CMD processing in play.

Also good to see as hinted mentioned in passing before is a high level of brightness from the projector, showing that JVC continues to make strides in this department that’s traditionally being a D-ILA stumbling block.

The bottom line is that the X500 produces the most immersive and beautifully cinematic pictures you can get for five grand, and you can’t fairly ask for much more than that.