It’s a cheeky so and so is what it is. For at a time when the AV world’s going crazy for 4K, the JVC DLA-500 projector has the temerity to sort of make you think it’s a 4K projector when it actually isn’t, thanks to its saucy little e-shift 4K technology. Fortunately, the latest take on JVC’s near-legendary D-ILA projection system turns out to be so darned good that we ended up forgiving its water-muddying 4K claims in about 12 seconds. Read on to find out why. 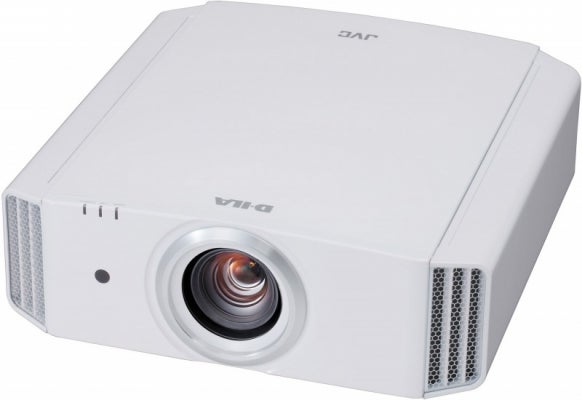 The JVC DLA-X500 looks and feels gorgeously ‘serious’. Its footprint is large by the standards of the £5k and below projector market, with striking grilled ‘wings’ on either side for keeping the lamp inside cool, and loooonnnggg stretch behind the large, centrally mounted lens. It’s also gratifyingly heavy, suggesting the presence of all manner of quality optics and componentry.

Our test sample came in a tasteful matt white, by the way, but you can also get the X500 in black if you prefer.

Connections on the X500’s rear are as we’d expect of a serious home cinema projector. Two HDMIs kick things off, and these are particularly interesting this time out for JVC since as well as handling 3D they’re also capable of taking in native 4K content up to 30 frames per second. Even though, as we’ll see presently, the projector isn’t able to output native 4K content. Kind of… Sigh. Explaining all this really isn’t going to be easy, is it?!

Other connections of note include RS232C and LAN ports for integrating the projector into wider home control systems, a 12V trigger port you could use for, say, automatically firing up a motorised screen, and a little circular jack for slotting in the external 3D transmitter.

For yes, the X500 continues to care about 3D even if apparently most punters do not, with JVC in the UK also managing to throw in a couple of free pairs of active shutter 3D glasses.

Interestingly there’s no component video port, even though this was once an essential part of the ‘HD Ready’ spec. Dropping the components does, of course, make absolute sense given how few people will be using this old analogue HD delivery system these days.

The X500’s specification is based on that of last year’s X55 model – though there are some significant changes. Of these the most eye-catching and even potentially controversial is the addition of intelligent lens aperture technology that ups the X500’s claimed contrast ratio to a humungous 600,000:1 (compared with the X55’s 50,000:1). The native contrast ratio of the X500 if you decide not to use the dynamic iris is 60,000:1, in case you were wondering.

Why is anything that delivers such a healthy-looking specification boost potentially controversial? Because using an adjusting iris to adjust the image’s brightness opens the door to JVC losing the outstanding light stability that has been such a trademark of its previous D-ILA projectors, which have traded very successfully on their native rather than dynamic contrast ratios.

Another new feature of the X500 is the introduction of a new third-gen iteration of e-Shift (or eh?-Shift as we affectionately refer to it) 4K technology, including the ability this year to handle native 4K source inputs. Even 60FPS native 4K is supported, albeit only at 8-bit with 4:2:0 chroma subsampling. The main difference between e-Shift 3 and its predecessor is that it has the processing chops to be able to scan images frame by frame and pixel by pixel compared with only being able to handle blocks of pixels across eight frequency bands with e-Shift 2.

JVC has also added some more picture calibration features – such as more accurate pixel shifting – previously only found in the higher echelons of JVC’s projector ranges, yet at the same time it’s also managed to simplify its menu structure quite effectively.

Of the features that continue from the X55R, the most important one to mention is the Lens Memory function. This lets you store up to five different focus and zoom combinations so that you can adjust the image to suit different aspect ratios of content. Naturally this feature is only possible because the X500 has fully motorised zoom and focus facilities.

There’s also a return for JVC’s Clear Motion Drive motion processing system, but experience suggests you’ll probably not need to use this as while it can sharpen D-ILA’s motion handling, it also tends to leave pictures looking over- processed and prone to digital glitches. 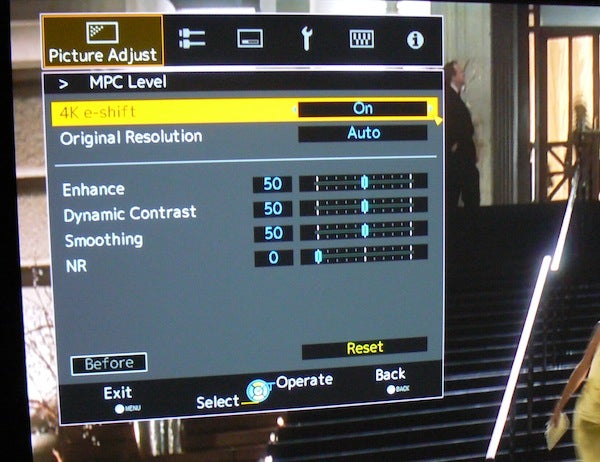 The X500 is, like all JVC’s current projectors, 3D capable. And despite the apparent loss of appetite from the public for 3D JVC claims to have been working very hard over the past 12 months to improve its 3D performance in the face of complaints about the amount of crosstalk ghosting noise visible on last year’s models. It’s worth adding here that as usual JVC UK provides a 3D transmitter dongle and two pairs of active shutter glasses with the projector.

A further highly pertinent ‘feature’ of the X500R is its price. For while its £5,000 asking price is, of course, hardly cheap, it’s substantially – as in, £3,500 – cheaper than the price being asked for the Sony VW500ES native 4K projector. That saving will still represent a mighty chunk of change to your average move fan. It’s cheap enough, in other words, to be excused its lack of native 4K capability.

What’s perhaps a little less easy to excuse, though, is the hay JVC is trying to make out of e-Shift’s 4K elements. The way e-Shift actually works is to position two 1920×1080 (full HD) imaging devices in line but offset diagonally by half a pixel. This means that the final image does indeed enjoy four times as many pixels as a normal full HD image, but crucially we’re only really talking about increased pixel density here rather than four times as many actual, real pixels of native image data.

So with the native 4K sources now supported, these actually have to be downscaled to 1080p before they can pass through the e-Shift 4K system. JVC doesn’t even say that using a native 4K source will yield any substantial picture benefit over using a good HD source, suggesting instead that the 4K input compatibility is really just there as a future proofing measure, for when more 4K sources are available.

In the end, as you look over the confusing 4K situation of the X500 it’s hard not to think that JVC was rather caught on the hop by Sony’s VW500ES, and didn’t expect to have to be talking about 4K in such direct competition with a ‘genuine’ 4K product this year. But as we noted a moment ago, the X500’s substantial price advantage over its Sony rival kind of absolves it of some of the responsibility for potentially confusing the burgeoning 4K market. 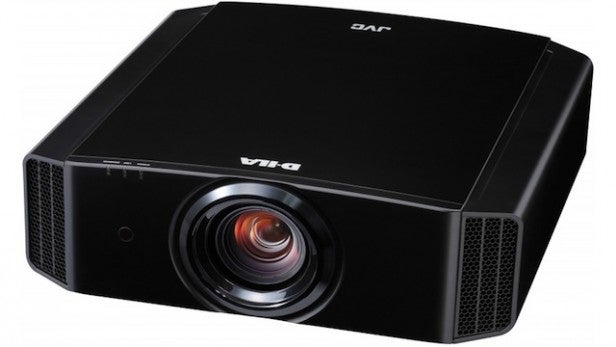 Perennially lazy couch potatoes that we are, we love the motorised lens adjustments on the X500. Zoom, focus and horizontal/vertical image shift are all accessible via remote control – and the amount of zoom and image shift available are both enormous. Add these facts to the impressive precision the motorised zoom offers and you really have got a projector that’s able to adapt to almost any room configuration and a pleasure to install.

The X500 sports an expansive suite of picture adjustments, including full colour profile management, white balance/colour temperature fine tuning, and a gamma menu where you can either select a suitable preset or adjust the gamma curve to suit.

It seemed to us, though, that more of the presets were better judged out of the box than has been the case on previous JVC mid-range models, so while fine-tuning to your room – preferably with the help of an ISF installer – will always yield some improvements (especially in the areas of shadow detail and colour balance), getting great pictures out of the X500 all by yourself really isn’t a scary proposition.

Actually, the only two areas we’d really suggest that you must tinker with are the 4K e-Shift settings (placed in a menu unhelpfully called MPC Level) and the Clear Motion Drive (CMD) settings.

Where e-Shift is concerned, we found that while we mostly preferred to leave e-shift on, at least while watching HD sources, we did feel the urge to turn the Enhance setting down to between its 30 and 40 levels to stop upscaled pictures looking a bit too gritty, while also turning the NR element down to 1 to stop e-Shifted pictures from starting to look over-processed.

As for the CMD, personally we think you’d be better off turning this off pretty much constantly, as even on its lowest settings it causes enough glitches and unnatural artefacts to over-ride the slight boost in motion resolution it delivers.