If you ask me, JVC’s D-ILA projectors deserve some sort of distinguished service medal. After all, from the jaw-dropping (and totally out of the blue) moment they adopted JVC’s innovative new Optical Wire Grid system, D-ILA projectors have been setting new standards that have forced rival technologies (DLP, LCD, D-ILA) into unparalleled levels of R&D as they try to keep up. In other words, I honestly believe that the D-ILA/optical wire grid combination has made the whole projector world a better place – and that’s got to be a good thing.


Actually, given the problems JVC seems to be having with many of its other consumer electronics wings right now, it’s possible the brand’s D-ILA projectors are even keeping the company afloat, at least in the UK. But that’s a discussion for another day. All that matters here, as I place the HD950 gently onto my projector stand, is whether it significantly betters previous JVC models, and whether it remains significantly ahead of the ever-improving chasing pack. 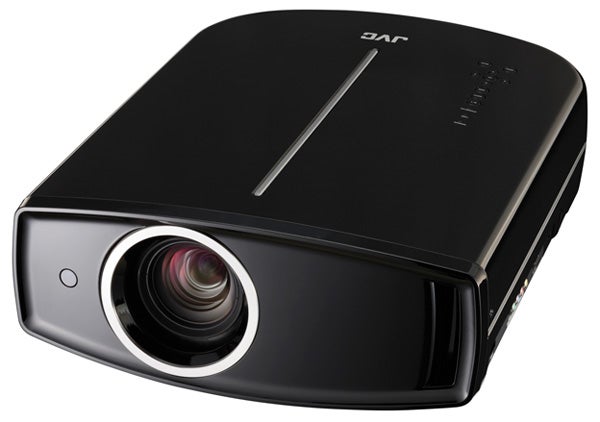 At £5,675, you can probably guess that the HD950 isn’t JVC’s new entry-level D-ILA model; that honour belongs to the HD550, which we’ll hopefully be having a look at soon. The HD950 is actually the ‘middle’ model from a new three-strong range, sitting below the higher-contrast, more heavily featured (and eight grand!) HD990.


So what exactly does the HD950’s middle-man status get you in terms of design and features?


Aesthetically you get a projector that seems identical to the much costlier HD990 – and which closely resembles JVC’s previous generation of projectors. Which is fine by me, for the curved corners, vaguely elliptical shape, silvery highlights and extremely opulent, high-gloss, heavy duty finish all cut a very pleasant dash indeed in your average home cinema room.

The HD950 perhaps loses something aesthetically versus Sony’s SXRD models on account of its lens sitting slightly awkwardly to the left, whereas Sony’s sits in the centre, satisfying our desire for symmetry. But this is a pathetically small niggle, really.


At least the lens barrel is tucked away inside the HD950’s robust chassis, rather than sticking out and therefore being prone to damage as was the case with JVC’s first D-ILA/optical grid models. For further protection, a cover slides over the lens automatically when the projector is off.


The HD950’s resolution is, of course, Full HD native. But of much greater interest is the HD950’s vast 50,000:1 native contrast ratio – which is to say, 50,000:1 without having to use the sort of dynamic iris systems most rival technologies have to use to produce their often outlandish maximum contrast ratio figures. This native contrast performance on the HD950 has the potential to produce the most stable, natural and detailed dark scenes in the projector’s class.

The HD950 does actually have an adjustable aperture. In fact, it sports an impressive 16 different aperture settings. But crucially this manual aperture adjustment is only there to aid with optimising the HD950 for different types of room environment it might find itself in, or the type of screen it’s going to be partnered with. It’s not there to artificially boost the HD950’s contrast measurements.


Not surprisingly given its custom install aspirations, the HD950’s customisability doesn’t end with its aperture setting. Crucially, for instance, the projector also carries a colour management toolbox, via which you can tinker with the brightness, hue and saturation of the key magenta, cyan, yellow, red, green and blue colour elements. Plus there are a set of colour temperature presets, presented in Kelvin values, and including a 6,500K setting which, as expected, proves the best option with the vast majority of film and video sources. 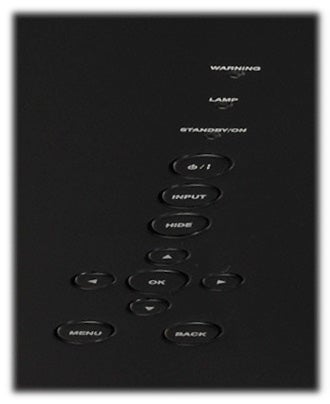 You can also manually set the picture’s gamma level, tell the projector the finish of your screen so it can adjust the image accordingly, and call in a couple of intriguing tricks dubbed inverse telecine mode and Clear Motion Drive processing.


The first of these intriguingly converts normal standard def fare into a 24p signal, which it then doubles to 48fps for playback. Why? Because it makes the likes of the ”Jeremy Kyle Show” and ”EastEnders” look more cinematic! The effect is actually more interesting than it sounds, though I also have to say that it sometimes seems a bit incongruous. After all, it can’t also turn Ian Beale into Tom Cruise, so its ‘Hollywoodisation’ of your average TV programme only goes so far! 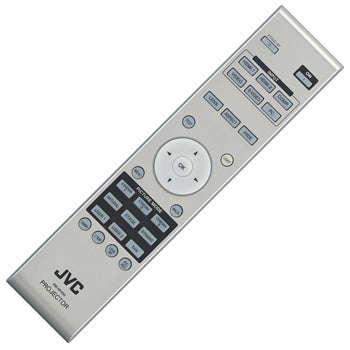 The feature comes more into its own, obviously, with DVD playback – though to be honest, if you can afford the HD950, you’d be stark raving bonkers not to also get some sort of Blu-ray player to feed it films with.


The Clear Motion Drive, meanwhile, interpolates extra frames of image data in a bid to reduce judder. And actually, it’s so potent in the HD950 that it can pretty much remove judder altogether. The only problem – aside from the fact that such ‘liquid’ images can actually look unnatural – is that the Clear Motion Drive processing also generates quite a few noticeable side effects. And for me, these frequently proved more distracting than the judder the system was designed to repress. As a result, I personally left the system turned off for the vast majority of time.


With this in mind, it’s a relief that the HD950’s pictures don’t turn into some sort of juddery mess when the Clear Motion Drive is inactive. In fact, the small amount of judder that remains for the most part simply looks quite natural to my eye.

If you’re thinking at this point that the HD950 sounds way too complicated and sophisticated for you to get your head round, we have a couple of bits of good news for you. First, the HD950 has been endorsed by the THX organisation, to the extent that it actually ships with a THX picture preset that gives you what THX deems to be the best settings for video the projector can achieve. Personally I still found myself marginally tweaking the colour settings from the THX levels, but that’s probably because I’m the sort of person who really ought to get out more…


The HD950 is also endorsed by the Imaging Science Foundation – to the ISF C3 level – meaning that you can get an ISF engineer in to professionally calibrate your projector to take into account the subtle specificities of your room set up (assuming this wasn’t done when you first had the projector installed, of course). This ISF support was conspicuously absent on last year’s HD750.

I’ve been so wrapped up in the HD950’s more sophisticated features that I’ve so far failed to cover some of its more basic – though still key – bits. So: connections include two HDMIs, a 12V trigger output, an RS-232 control port. There’s also a D-Sub PC port – something you won’t find on the cheaper HD550.


Installers will be relieved, too, to find that the HD950 permits shifting off the image optically as much as 80 per cent in the vertical domain, and 34 per cent horizontally, meaning that a perfectly proportioned image should be obtainable in almost any room layout without resorting to the dreaded image-distorting antics of digital keystone correction.


The lens supports an excellent x2 level of optical zoom, moreover, with other general features worth mentioning including a solid though not inspirational brightness output of 900 Lumens, and onboard HQV Reon-VX processing. This latter system consistently delivers some of the finest interlaced-to-progressive processing around without spending megabucks, as well as providing solid scaling and full 10-bit 4:4:4 processing. 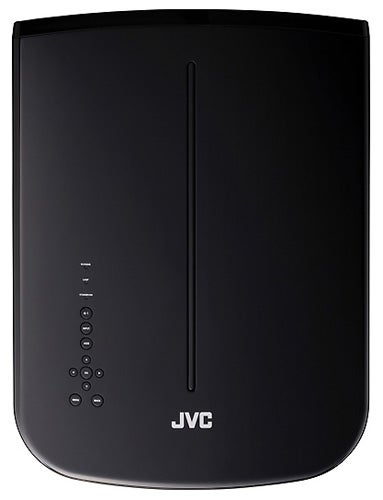 Finally settling down to watch the HD950, I’m quickly immersed in the wonderfully satisfying experience that seems now to be almost inevitable with any D-ILA product.


As usual, leading the charge of good picture points is the HD950’s terrific black level performance, which finds dark scenes enjoying black colours of a naturalism and profundity that’s unprecedented at the HD950’s price point.


What’s more, since the HD950’s ultra-efficient Optical Wire Grid system can achieve these black levels natively, without having to continually adjust the image’s brightness, dark scenes enjoy seemingly complete stability, with none of the brightness jumps or flickering you get with projectors that have to use dynamic irises to achieve good black levels. Where dark scenes contain bright elements, moreover, the HD950 is able to deliver a huge and dynamic contrast range, since it doesn’t need to reduce the brightness of the overall image to keep its black levels intact.

Yet another lovely knock on effect of the HD950’s native black level prowess can be seen in the outstanding levels of shadow detail it can reproduce during dark scenes. There’s no sign of that slightly hollow look you can sometimes see in dark picture areas with projectors that have to use a dynamic iris.


The dynamism induced by the HD950’s terrific native contrast performance goes a very long way, too, towards effectively disguising the projector’s rather run-of-the-mill brightness output – unless, that is, you’re daft enough to be using an HD950 in a room containing quite a bit of ambient light.


The HD950’s images glory in another traditional D-ILA strength, too: pretty much perfect levels of clarity and sharpness. Feed it a good quality Blu-ray or Sky HD image, and the crispness, detail and texture of the image will have you purring with delight. It kind of follows from this that the HD950 is also pretty ruthless when it comes to exposing video noise on those occasions where, say, Sky hasn’t given an HD broadcast enough bandwidth, or hasn’t used a very good HD remaster of a film. But this is hardly JVC’s fault!

While I’m on the subject of the HD950’s clarity, I should remind you that the D-ILA system means the projector doesn’t have any issues like DLP’s rainbow effect and motion noise, or LCD’s ‘chicken wire’ effect.


The HD950’s biggest improvement over the HD750, meanwhile, comes in the area of colour. There’s a fraction more subtlety and expressiveness in the way it handles fine tonal shifts and blends, as well as a generally more natural and evenly balanced tone. Especially if you or preferably a professional installer spend a little time calibrating things to perfection.


With the HD950 also running remarkably quietly (19dB) for such a potent projector, there really isn’t much negative I can say about it beyond the aforementioned avoidable/unfair Clear-Motion-Drive/highlighting-poor-sources issues.


I guess you could possibly argue that the HD950 is only a fairly small evolution of the HD750 rather than a real leap forward. But then the HD750 was so good itself that it’s hard to imagine how a massive improvement could have been delivered without significantly upping the price. Which is precisely why I just can’t wait to get my hands on the HD990!


The HD950 might only be slightly better than its predecessor. But when that predecessor was as superb as the HD750, even the HD950’s gentle evolution is enough to make it the benchmark product in its price range. 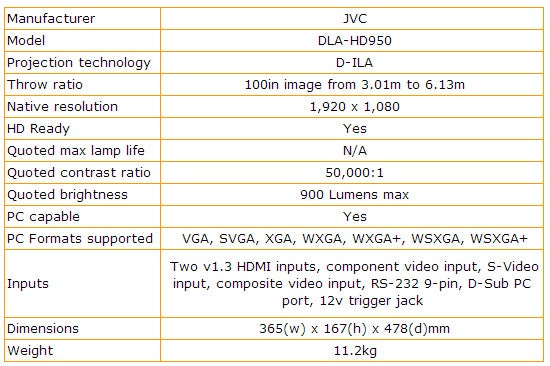