Having name-checked JVC’s DLA-HD100 in our review of the Sony VPL-VW200 projector last week, we thought we might as well strike while the iron’s hot and present our anticipated review of JVC’s star turn right away.


Obviously this means we’ll have covered two premium projectors in a row, but don’t worry; if you’re not interested in a projector and/or you don’t have the small matter of at least five grand burning a hole in your pocket in these credit-crunching times, we promise our next video display review will focus on something considerably more ‘mainstream’!


Anyway, returning to the rarefied ground of the HD100, it’s a product that warrants a bit of background information before we get down to any testing nitty gritty. Essentially it’s a step-up sibling to JVC’s truly ground-breaking DLA-HD1, a projector which used an innovative new ‘wire grid optical engine’ to produce quite probably the finest pictures we’d then seen on any projector in its sub-£4k price bracket. 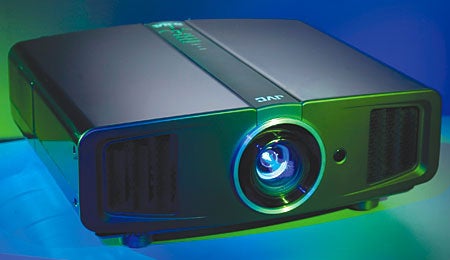 The key points about the Wire Grid Optical Engine are these. First, it makes use of a new smoothing technology at the construction stage that reduces imperfections in the liquid crystal alignment process. Why? Because that should help keep a lid on the amount of contrast-reducing stray light bouncing around inside the optical system.


Next, the Wire Grid Optical engine replaces the normal prism device for splitting light into colour (a notoriously light-inefficient approach) with a flat device featuring an inorganic reflective polarising surface and aluminium strips arrayed along the top. This ‘wire grid’ approach considerably reduces the angle dependency of polarised light, meaning you end up again with far less unwanted light spillage and, as a result, much enhanced brightness and black level response.


For instance, remarkably the HD1 boasted a completely native contrast ratio of 15,000:1 – one of the highest figures around on any projector, never mind one costing the relatively affordable (by quality projection standards) price of £3,500. The ‘completely native’ bit of that last sentence is highly significant too, as it means that this sky-high contrast ratio figure was achieved without resorting to the ‘sneaky’ dynamic iris tactics employed by most rival technologies, including Sony’s VW200, whereby the most extreme contrast is only achieved by dimming the projector’s brightness during dark scenes. In other words, with the Wire Grid system you can theoretically get maximum brightness and maximum black level response at one and the same time – a situation which delivered one of the most dynamic pictures in the projection world, especially while viewing dark scenes.

So how has the HD100 managed to improve on the HD1’s already immaculate efforts? Simply by refining all the key bits of the HD1’s Wire Grid system. But the results could be emphatic, for the HD100 claims a native contrast ratio of – drum roll please – 30000:1.


As you’d expect of a premium projector, the HD100 is full HD in resolution, and can take in and handle fluidly 1080p/24 feeds from Blu-ray players. What’s more, the projector’s HDMI sockets beat those of the HD1 by being built to the V1.3 standard, for Deep Colour compatibility. JVC handily has a new HD camcorder range with Deep Colour output, by the way, in case you were wondering where a Deep Colour source might come from.


The HD100 also scores over its cheaper sibling with its picture options. There are far more tweaks available to you, including a huge set of colour fine tuners, loads of different noise reduction systems, and customisable gamma settings.

The HD100 puts right a niggle of the HD1, too, by including an RS-232C control port so that it can be easily integrated into a home cinema installation. This should make it far more appealing to the custom install market that’s so important at the HD100’s kind of price level. Given the presence of the RS-232C port it’s surprising that the HD100 doesn’t go the whole ‘system hog’ and also add a 12V trigger output. And I also felt the lack of a dedicated D-Sub PC port was disappointing, since this meant that I had to use one of the precious HDMIs for PC connection – hardly an ideal situation on such an otherwise ambitious home cinema machine.


Final features worth running by you include the HD100’s use of the acclaimed third-party Gennum image processing engine, an excellently flexible x2 level of optical zoom, and the ability to shift the image by up to 80 per cent vertically or 34 per cent horizontally. These latter touches should help the HD100 work within almost any room shape or size.


The big question for the HD100 as we settle down to watch it in action is simply whether its clearly substantial refinements to the HD1’s optical engine, together with its extra fine tuning options, can really deliver pictures that justify the HD100’s substantially higher price tag. And the answer is that it can. Just about.

As we’d expected, the star of the HD100’s show is its black level response. In fact, the depth and richness of its reproduction of black during, say, the opening space battle of Star Wars: The Revenge of the Sith on Sky HD, is for my money unmatched from any projector costing less than five figures.


What’s more, this seemingly immaculate black level is being achieved without any need of a dynamic iris system, so that it’s completely stable and unaffected by brightness ‘jumps’. It’s in this black level profundity and stability that the HD100’s main advantage over its closest rival, the Sony VW200, lies. For without its dynamic iris system in play the VW200’s black levels fall short of those of the HD100. Yet with the dynamic iris in play, you’re sometimes distracted by being able to see the VW200’s iris going about its opening and closing business.


The fact that the HD100’s intense black levels are achieved without a dynamic iris system also means that its pictures contain a dynamic range to die for, with pristine, bright whites sitting side by side with emphatically deep, believable blacks. Needless to say this works wonders with our Star Wars space battle. In fact, at times I realised my jaw had unexpectedly dropped open as I watched the scene unfold, so good was the picture quality – and it takes a lot to affect a hardened old reviewer like myself to such an extent. 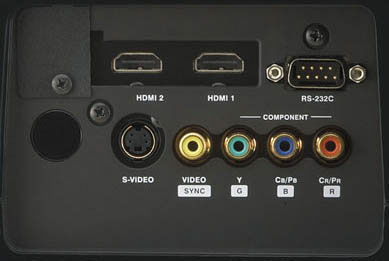 Contributing still further to the magnificence of the HD100’s portrayal of The Revenge of the Sith is its impeccable motion handling. Space ships and debris zoom around the screen at extreme speeds, yet the HD100 shows everything with scarcely a hint of motion blur or the sort of fizzing noise that can afflict motion on rival single-chip DLP technology.


And there’s more. For the HD100 also excels at bringing out every last lovely HD pixel of any high definition source you care to throw at it. In fact, its HD pictures are among the sharpest and most detailed we’ve ever seen – even though they’re also devoid of the grainy flavour that can sometimes accompany high detailing.


Chuck into this already heady picture brew the fact that colours look superbly subtle in blend and natural in tone, and the fact that the Gennum processing enables the HD100 to do a better job than most of upscaling standard definition sources to its full HD resolution, and we’re fast running out of any area where we might level criticism at the HD100.


The only area where the HD100 perhaps loses out a touch to some of its high-spec rivals, including the Sony VW200 we keep mentioning, is with its colours. They’re just not quite as vibrant as they could be.


Our attempt at the end there to find something bad to say about the HD100’s performance really was just grasping at straws, to be honest. For the truth is that this projector is even better than the already outstanding HD1, and as such arguably rates as the best projector money can buy without stepping up to a three-chip DLP model.