Preview: Just Cause 4 feels like a genuinely solid improvement over its predecessor with refined systems, a gorgeous world and plenty of tornadoes.

Rico Rodriguez is about as generic as gaming protagonists come. He’s a gruff, masculine and wise-cracking fella with an endless array of silly weapons at his disposal. But, in Just Cause 4, it simply works.

Avalanche Studios is perfectly aware of the ridiculous world it’s created and the absurd chaos caused within. The fictional island of Solis is a beautiful tropical playground, where natural disasters and explosive mayhem are commonplace, with citizens fearlessly living out their lives like it’s no big deal.

Sadly, I was underwhelmed by Just Cause 3 in every conceivable way. However, now having spent a few hours with the fourth instalment, it’s taking important steps to address fan complaints and create something quite worthwhile. 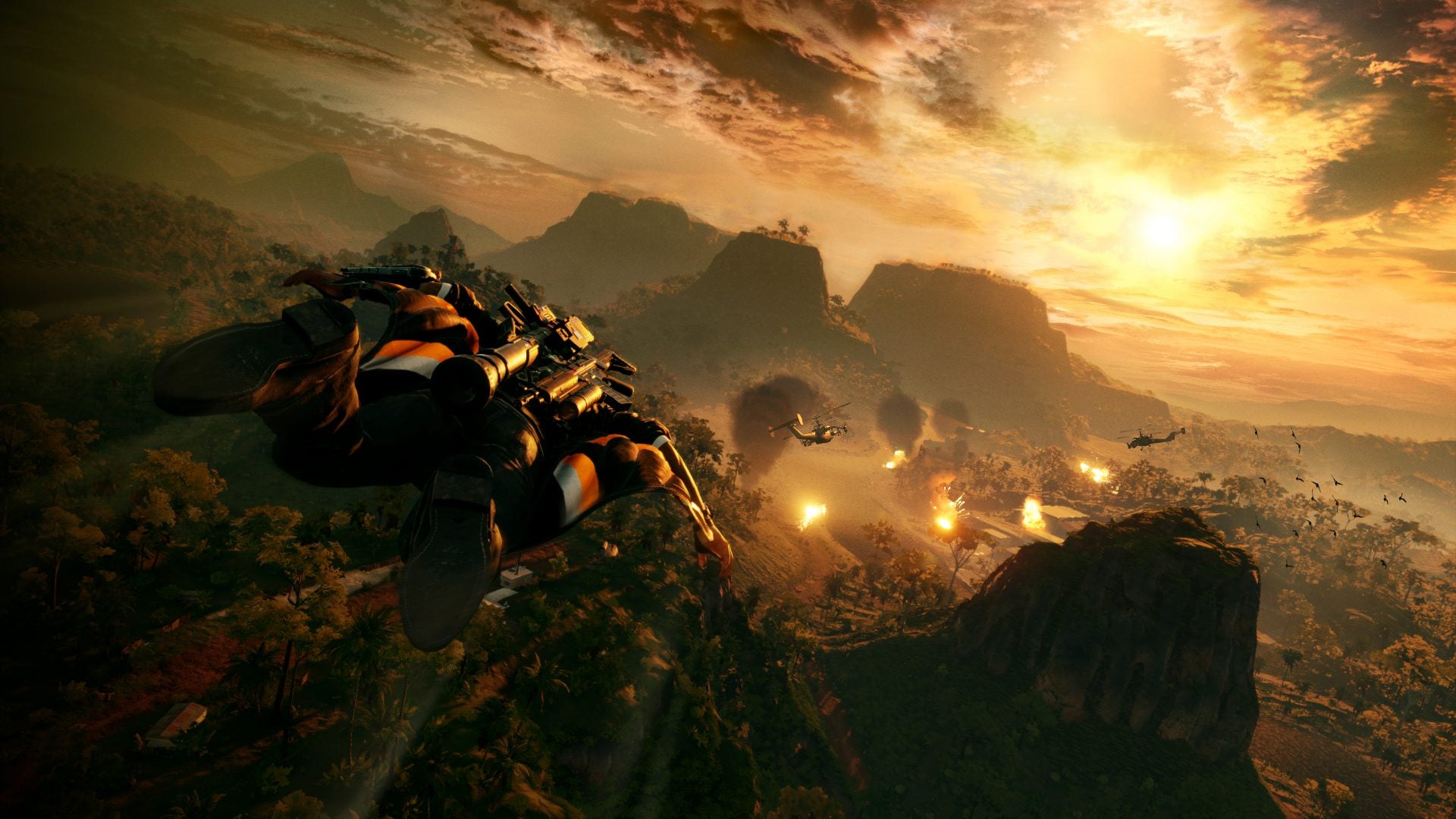 The plot doesn’t matter much in Just Cause 4. It’s present and accounted for, with Rico doing battle with an evil organisation known as The Black Hand across the island of Solis. After liberating his homeland in the last game, our hero is turning his attention to more serious means as he goes up against highly advanced mercenaries and a series of seemingly man-made weather calamities.

During my hands-on session, the developers alluded to mysterious forces working in the shadows, causing the unstoppable tornadoes and lightning storms tearing their way through the wilderness. Rico’s mission is to stop this, helping out fellow citizens and rebel forces the best he can. Of course, this often involves blowing things up, which is totally fine by us.

If you’ve played Just Cause 3 then you’ll feel immediately at home with how the fourth entry feels to play. Using new technology known as “The Apex Engine”, it’s no longer aped by crippling performance issues that ruined things on console last time around.

Instead, it’s buttery smooth, reflected in how responsive Rico feels as you deploy your wingsuit in-between jagged cliffs and claustrophobic sequences of road. It controls brilliantly, creating a true sense of scale as you explore the world.

Solis is a beautiful setting, too. The island is made up of several distinct biomes, each with their own weather anomalies. The capital city is hounded by a sequence of tornadoes, while snowy mountains have to contend with a rapturous blizzard tearing apart military facilities. Upon seeing my first tornado, I immediately spawned a jumbo jet and blasted my way towards it. I wasn’t disappointed. What’s better than one exploding helicopter? How about two!

Avalanche Studios has done a phenomenal job of making them feel like a legitimate force of nature. Once caught up in its winds, the tornado throws Rico around like a ragdoll, sucking him off alongside countless other bits of animals, debris and other parts of the dynamically reactive world. It’s also hilarious, the physics system throwing Rico around with such wondrous abandon that I couldn’t help but chuckle.

You aren’t the only thing influenced by these, either. Island inhabitants will drive into them with comedic determination, while animals and fauna are unfortunate bait for the growing winds. I also drove a tractor into it out of curiosity and couldn’t manage to lift myself off the ground.

It seems to determine things by weight, which teases some interesting elements to the physics system I’m yet to see unfold. Sadly, I only briefly encountered a lightning storm, so can’t speak to how extensive its effects are on Rico and his surroundings.

Outside of its ambitious new weather system, Just Cause 4 is decidedly more pedestrian in its approach to open-world design. This is particularly true in story missions, an area where the series has faltered in the past. The joyous chaos you can cause across Solis is often neutered when you’re forced into scripted sequences filled with uninspiring chase sequences.

I only played through a few missions during my time with Just Cause 4, largely because of how fascinating the systems outside them are to experiment with. The ones I did experience weren’t anything special, only causing to highlight the simply average gunplay and vehicle controls.

You’ll encounter a fun cast of characters, but I’m yet see their backstories unfold – I’m sceptical they’ll actually deliver something truly compelling. Time will tell, and if Avalanche Studios decided to lean into its wackier elements with the narrative campaign, we could be in for a treat. 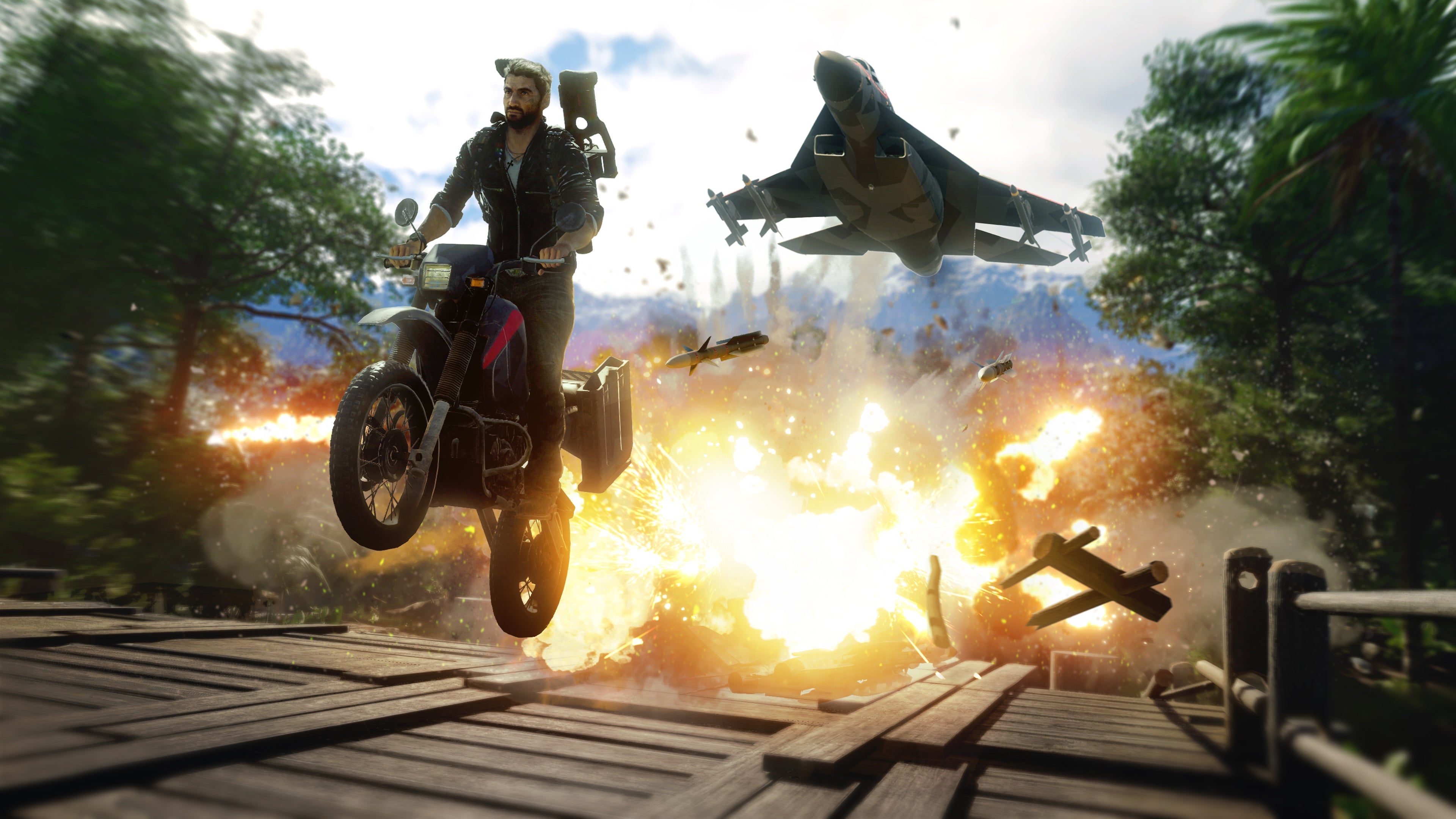 Of course, it wouldn’t be Just Cause without the iconic grappling hook. Continuing to deny the laws of physics, Rico’s trusty hook can propel him across the world in a matter of seconds when used in combination with his unlimited supply of parachutes.

It means you’ll never walk anywhere, always seconds away from a maneouvre that propels you into the air, ready to deploy your wingsuit. Like I said before, it simply feels amazing in practice.

The grappling hook is now fully customisable, capable of Airlifting, Boosting and Retracting all manner of objects. One example saw the developers spawn in a tank, before causing it to float in the air with a series of balloons. Add a couple of powerful boosters and you’ve your own flying death machine. Soaring into an enemy fortress in such a manner was excellent, encompassing everything I’ve come to love about Just Cause 4.

While we were given free reign with completely upgraded tools, the real experience will be somewhat more mediated. You’ll unlock new attachments while progressing through the campaign and causing chaos amidst enemy strongholds, the latter of which is a far better outlet for creative freedom. Here’s hoping the pace of progress is consistent enough to keep you engaged. 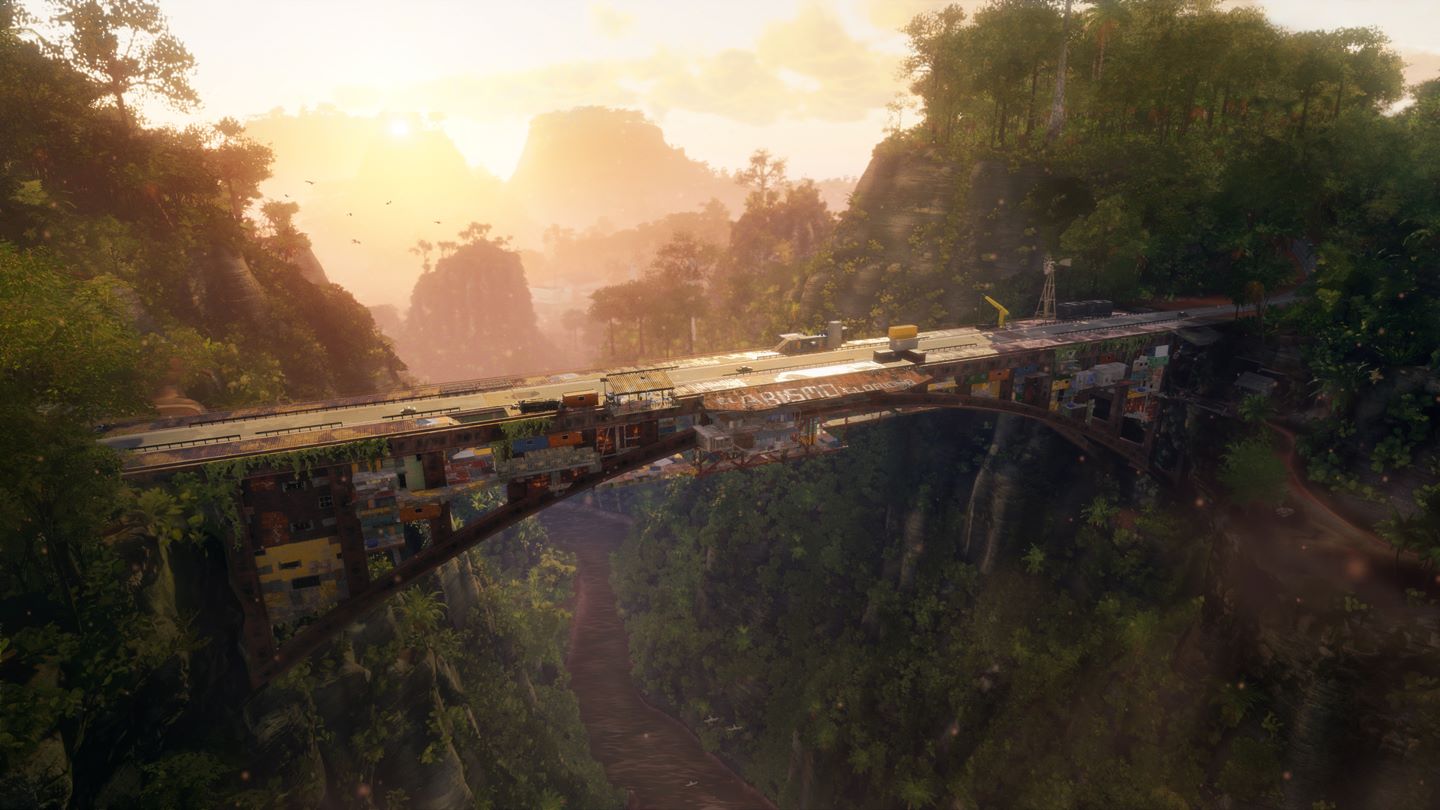 Here’s hoping we can blow this bridge up.

Rico is a leader to the Army of Chaos, a growing group of rebellious soldiers, ready and waiting to fight back against The Black Hand. After completing missions, destroying enemies and their equipment in the open world, you’ll be provided opportunities to expand your territory.

This is depicted through the in-game map as you push forward frontlines and, presumably, overpower the enemy.

I also saw a few brief glimpses of this new mechanic, but it does seem cool. Destruction in previous outings was a flash in the pan, providing quick and easy satisfaction with thunderous explosions. The Army of Chaos system feels more considered, and knows that you want your actions to really mean something to the island of Solis.

Avalanche Studios has clearly come to the realisation that true enjoyment of Just Cause 4 comes from allowing the player to experiment with its systems with their own devices, free to see how this vast, complicated world ticks in response to every minute of action.

Uninspired story missions and gunplay that lacks a real sense of impact remain, but all other components have been refined to a shiny polish that makes them a delight to interact with. For Just Cause 4, this might just be enough to supersede the series’ past failings.