Say what you like about Just Cause, just don’t say that it’s doesn’t have ambition. The game is positively fit to burst with the stuff; look carefully at the screenshots, and you can probably see it seeping out from between the pixels. The environment is huge – a South American island boasting over 1,000km square of beaches and mountains to explore – and you get a huge range of vehicles, from bikes, ATVs and Jeeps to boats and even helicopters, with which to explore it. What’s more, the Avalanche engine really is an amazing technical accomplishment, delivering on the age-old promise of procedural landscape generation with an undulating game-world covered in lush vegetation, unfolding seamlessly before your eyes with zero loading and minimal pop-up. 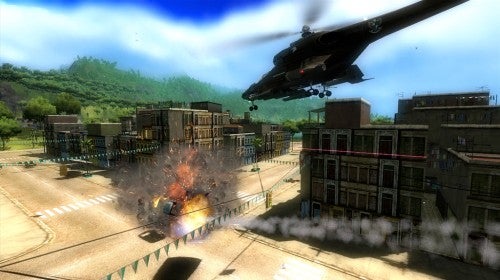 The sad thing is that the game is, to some extent, a victim of this ambition. It’s as if the team at Avalanche was so busy filling this enormous canvas with a bloody great big picture that they failed to add the smaller brush-strokes that would make it feel a living, breathing place. If you want an example of how this mistake can separate the great from the merely very good, you’d struggle to find anything better.


But let’s backtrack. Let’s pull back to the basic premise, as it were. The South American island in question is San Esperito, your standard issue dodgy state held by an oppressive government and on the verge of resolution. You are Rico Rodriguez, a specialist bought in by an equally dodgy and equally standard-issue US intelligence agency to stir things up in the favour of Uncle Sam. To this end, you’re free to wander the island as you please, doing a small task for the insurgents here, a little job for a drug cartel there. However, as the game progresses you’re also given missions by your agency contacts, Kane and Sheldon, in return for support in the form of safe-houses, weapons and vehicles. The latter are particularly useful, as you can arrange particular models to be dropped by helicopter when you’re stuck in the middle of nowhere without a ride. 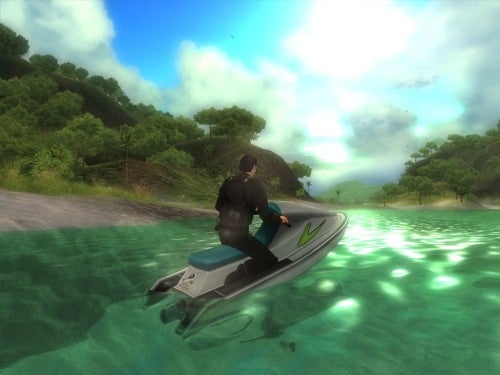 Now, the missions themselves aren’t anything that special: eliminate this guy, rescue that guy, get object X to destination Y, destroy facility Z, and so on. What is special is how these are accomplished. Just Cause announces its intentions very early, as Rico skydives into action then gets caught up in a stonking chase sequence just to kick things off. This is a game where getting from A to B is an adventure in itself, combining daredevil stunts, high-speed driving and a heck of a lot of gunplay in roughly equal measures. The game starts with you racing dirt bikes through the mountain jungles and stealing jeeps and off-roaders, but soon throws in its signature tool: the grappling hook. Using this you can engage your ‘chute and paraglide behind moving vehicles, then grapple a new ride and reel yourself in to steal it, or bust loose and take to the skies. Nor is this Rico’s only avenue for stylish moves. If you ever wanted to throw yourself out of a falling car, leap from vehicle to vehicle, or throw yourself through the window of a 4X4 to toss the present incumbent out (always tempting at school-run time), this is the game for you. And just when you think things can’t get any better, it throws helicopters in into the mix. Remember the opening sequence in Goldeneye? The motorcycle jump into a moving plane? Just Cause has moves to match. 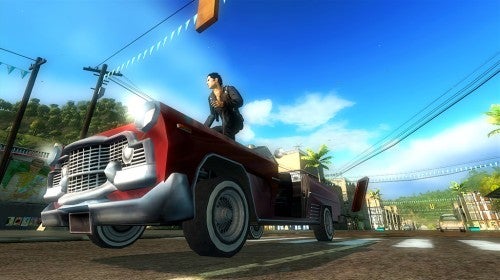 What’s more, using these tools you can work out how to do missions your way. Some reward the simple run-and-gun approach, but others require a little more ingenuity. Chasing down a target in the middle of a car convoy? Well, you could try driving after him and shunting the car off the road, but you could also try grappling the car behind, gliding onto the roof, entering the car and steering it off a cliff, throwing yourself out at the last moment to glide down as the car heads straight for the beach below. Want to get into an enemy HQ? Well, you could march in through the front gate, all guns blazing, but could also dive a motorcycle off a nearby bridge, glide and grapple a passing helicopter, then either capture that and land it or simply cadge a lift to a handy spot over the base.

It’s glorious boys-own stuff, and the main missions are mostly superb. Maybe the combat is simplistic, thanks to a particularly enthusiastic auto-aim, but that doesn’t mean it isn’t fun, and the game throws in moments reminiscent of LucasArts’ under-appreciated Mercanaries, where the missions effectively feel like puzzles, asking you to use the pieces you’ve been given to obtain the desired effect. 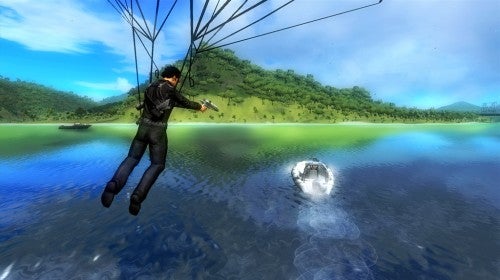 So, we have a game that, at its best, plays like the best Bond game that never was; a high-octane cocktail of super stunts, daring raids, and pulse-pounding runs to safety. It’s probably made me grin like an idiot more than any other game this year. So what spoils the party? Well, it’s basically the world outside the missions. The problem isn’t that – like Mercenaries – it’s unattractive, or that – like so many other free-roaming action games – that there isn’t enough to do. The rebel factions and friendly drug lords give you plenty to keep you busy, with settlements and strongholds to take over, packages to be delivered and enemies to be taken out, and there are even bonus collectibles to seek out if you can find the time and patience.


No, the problem is that these activities just aren’t that entertaining. The first few takeovers are fun, but the drill – blast goons, blow-up barricades, then capture flag or kill commander – soon gets tired. It’s the same with the other missions; no matter whom, what or how you’re delivering or destroying, it all feels a tad generic. And while completing these side missions pays dividends in terms of safe-houses, weapons and vehicles, you can get by pretty well without them, raising the question “why bother?.” 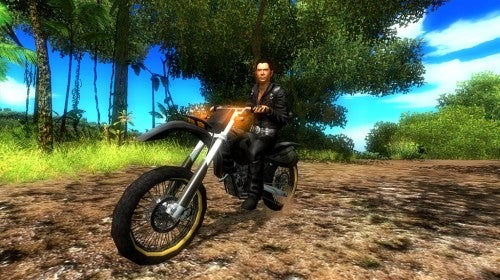 The island, meanwhile, is bustling with activity, yet there’s no real sense of different neighbourhoods or local identity. One tree-festooned mountain or gorgeous sandy beach soon gets much like another, and the villages all feel cut from exactly the same cloth. You can’t help wishing that instead of concentrating on the quantity of the world, Avalanche had done a bit more work on the quality. Just because the landscape is being generated by a bunch of brainiac algorithms, it doesn’t mean the world should lose the human touch.


And this lack of attention to detail does cross over into the visuals. Taken moment by moment, Just Cause looks gorgeous. We’re now getting used to – even bored with – lush foliage and warm lighting on the Xbox 360, but here the sheer scale takes the breath away. Drifting down from a mountain road through a river gorge to the soft sands of a beach while the sun rises behind your parachute is an awesome experience, right up there with anything seen in The Elder Scrolls: Oblivion or Test Drive: Unlimited. However, when you get up close and personal the character models are sometimes slightly rough, and nearly always noticably generic. Saint’s Row and Dead Rising have proved you can put large populations onscreen and still give figures individual details, but Just Cause doesn’t manage the same effect. This may be a result of that old bugbear, cross-platform development, but really, that’s no excuse. And why are the character models used in the in-game cut-scenes so crude, ugly and charmless? Compare the work done here to Dead Rising, Ninety Nine Nights or even Resident Evil 4 on Gamecube and you can’t help but wonder who thought this was good enough? 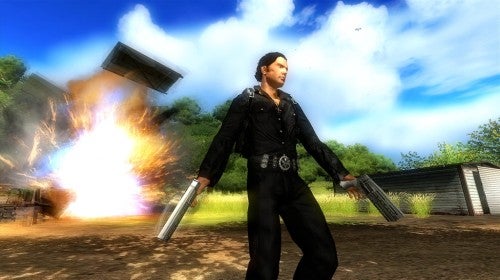 And on a similar theme, the music is great, but there’s just not enough of it to go round. I like the Spanish guitar mood pieces and the funky uptempo numbers, but could we have a few more tracks next time around?


Still, let’s not overplay these few complaints. The simple fact is that Just Cause is a very fine game indeed – the sort of game you want to recommend to friends just so you can share stories of outrageous derring do – but I’m sure you’ll understand my mild frustration when I say that, had the small stuff been handled as well as the big ideas, it could have been superb.


The stunts and the spectacle are matched by the scale of ambition, but in creating a world of fantastic possibility, Avalanche has forgotten to make that world convincing on a smaller level.