The D100 is a sat-nav from previously unknown Chinese company Junsun. You didn’t misread the price, either – it really is scarcely over £30 (at the time of writing). For this minuscule amount of money, you still get a 7-inch screen and maps for 49 European countries, including Russia, which normally would set you back over £100. So long as it actually works, the D100 looks like incredible value.

The D100 is essentially a Pocket PC specialised for navigation. It’s based around an 800MHz Corex-A7 processor with 256MB of RAM and 8GB of ROM. It runs Windows CE 6.0, and you can even get to the desktop of this operating system if you dig around in the menu. However, the system boots straight into a simplified graphical front end, which will then take you to the navigation application – iGO Primo.

The iGO Primo software is a relatively well-regarded navigation app, which can be purchased separately for iOS and Android, and is used for the embedded navigation in quite a number of cars, including Fiats, Ferraris, Hondas, Jaguars and McLarens. So the device might be a cheap Chinese import, but Junsun has chosen its components wisely. 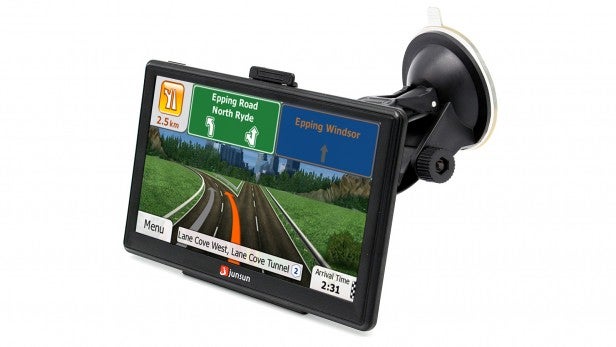 There are actually four map options for the D100, with subtly different prices, all round the £30 mark. Strangely, one of these is Russia on its own, which is also included with the European option. There’s also a North American pack, including Canada and Mexico, as well as a pack comprising the Middle East, Australia and South America. There are a few options missing, such as Japan, China, and South-East Asia, but a lot of the world is available.

One area where the D100 shows its low price a little is in the screen mounting. This is perfectly functional, and includes an articulated arm so the screen can be rotated and tilted to exactly the desired position. But the plastic cradle into which the sat-nav is clipped feels a bit flimsy and the process of attaching it is not as smooth as many sat-navs I’ve tested.

The D100’s main menu is quite easy to use, with large, colourful icons to take you to the various functions. These include video and music playback, as well as some games. There’s even a calculator and unit-converter tool. But the biggest square takes you to the iGO Primo software. 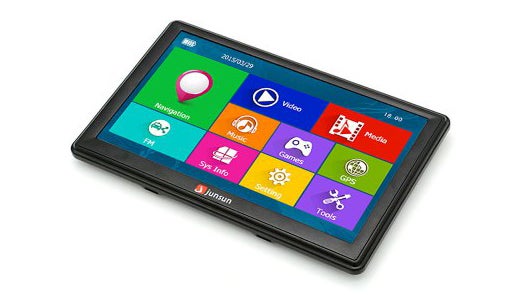 Once you choose this, another icon-driven interface appears. The largest icon takes you to the map, while three further icons provide facilities to search for a destination, plan a multi-waypoint route, and access supplementary facilities. These include yet another music player, picture viewer, unit converter, and (strangely) a clothing-size chart, but also more navigation-oriented features such as a trip monitor and fuel-consumption calculator.

The method for entering a destination does feel a little old-fashioned now that most of the big brands have moved over to universal keyword searches. Entering an address follows the traditional routine of country, town or postcode, street name, then house number. Points of Interest (PoI) are found primarily via categories, although there is a search function here. There is at least a history list and the option to save a series of favourites.

Once a destination has been entered, the navigation screen gives the usual 3D view, with the side roads in white, more major roads in yellow, and your route in a kind of terracotta. Turnings are shown on the map as yellow arrows. The next turning is also shown in the top left, with the one after that illustrated by a smaller icon next to it if it’s coming straight afterwards.

Roundabouts are clearly depicted in the next turning icon, with the various exits realistically shown, including their relative positions and the one you’re meant to be taking numbered, so you can count exits off as you go round.

Road names are shown as pop-up labels, with the name of the road you’ll be turning into at the top, and the one you’re currently on at the bottom. The distance to the destination can be found at the bottom right, and you can expand this out to include the estimated arrival time and the amount of time left on the journey. 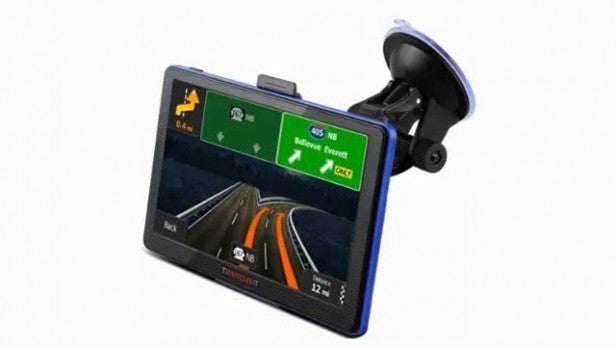 At major multi-lane highway interchanges, there’s a full-screen graphic to ensure you get in the right carriageway, with an approximation of the signposting along the top, which is always useful. A rather surprising inclusion at this price is 3D landmarks for some cities. This isn’t a feature I’ve found particularly useful, but it’s still pretty amazing to find it in a sat-nav costing £30.

The routes chosen aren’t the most efficient I’ve seen compared to Garmin and TomTom devices. Although historical traffic is allegedly taken into account, the routes chosen appear to be more based on road speed limits rather than how fast travel has actually been measured on that route, which is how TomTom and Garmin now calculate the fastest routes. So the chosen route might not be the most efficient possible. But in my testing the D100 still managed to find respectable ways from A to B.

Although the speed limit is displayed, your current speed isn’t shown unless you delve into the settings and change this from the default. Another downside is that there aren’t any safety camera locations included, nor average speed zones. But for the price, the D100 manages a very respectable navigational experience.

The Junsun D100 may lack polish in some areas, but it does manage to do the navigational job intended without any major problems. This makes the £30 or so price absolutely phenomenal, considering that some smartphone software costs more than this, and you get a whole standalone device with the D100. If you need more mature navigation and features, stick with Garmin or TomTom. But as an occasional navigator, or if you’re on a really tight budget, the Junsun D100 is unbelievably good value.

The Junsun D100 is available to buy from GearBest.

A £30 sat-nav should be rubbish, but this one is actually decent. The Junsun D100 offers incredible value.