The problem of course, and AV enthusiasts the world over will be nodding sagely right now, is that no TV you buy will ever have enough connections to cater for all this expensive gear. And who wants to spend their days crawling behind the TV to switch things around? I don’t, for one.


Enough questions though, let’s have some answers. Back in August, Riyad reviewed the AV Tool AV-5831 Component Video AV Switcher, and found it to be a superb solution for your component connection problems.

That, however, had only three inputs and there’s a good chance you’ll need more than that with all the new high definition equipment competing for your component connections. Enter Joytech and the Control Center 540C for Xbox 360, which sports an impressive array of connections and Xbox 360-esque styling.


That’s a lot of connectivity right there and, when you consider how much you’re likely to spend on equipment to connect to the 540C, £70-90 is a minor dent to your credit balance.


Of all the features, the Xbox 360 styling had me most concerned. Don’t get me wrong, I don’t hate the Xbox 360 look, but it’s no great beauty either, with its concave curvature making it look rather like the console equivalent of a steroid fuelled body builder. 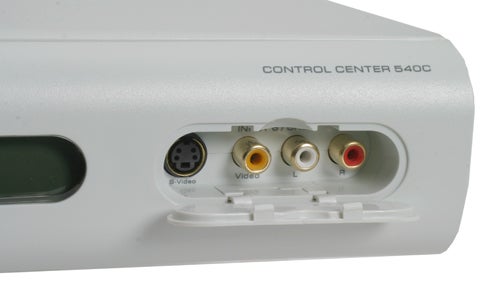 Thankfully, the 540C isn’t quite a faithful recreation and takes a few liberties to make it seem rather less bulky. Though the 540C has the same depth and height when in its vertical position, it’s not as wide as the Xbox 360 and the curvature is rather less pronounced. This gives the unit a rather less domineering look, and this is certainly favourable over a perfect replica of the Xbox 360 chassis.


On the front of the unit you’ll find an infrared sensor – for the included remote – power and channel switch buttons and an LCD display. In a nice touch the 540C has a motion sensor that detects the position of your unit, rotating the LCD display to suit.


Finally, hidden behind a flap on the front, are the front mounted composite and S-Video inputs. The flap is rather awkward to open at first and feels a little cheap, but you’ll soon find a knack to getting it open.


Happily, this is the only overt piece of cheapness to be found and though the plastics are by no means top of the range they are at least put together in a secure manner.

Just like the Xbox 360, the 540C has a removable faceplate and removing it reveals a set of controls that allow you to change how the LCD displays; changing the names of channels, the backlight and the output settings of the Xbox 360 input. It would have been nice to have this functionality on the remote, but the faceplate is easily removed and you shouldn’t have to do it too often.


The remote itself is a fairly functional item; Joytech supplies a pair of batteries and the remote allows you to switch between each channel quickly. Again, it would have been nice to see some extra functionality for the remote but what it does it does without fault. 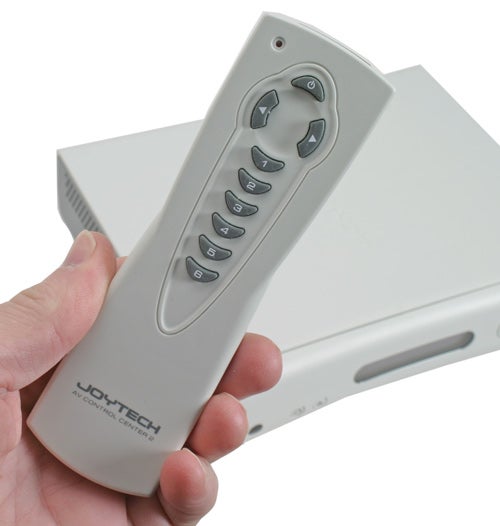 Naturally all the major action is on the back of the unit with all the various connections – and there are a lot of them – all situated there. Thanks to the moderately large form factor all the inputs are well spaced out, making it none too difficult to get at any individual connection.


Everything is well labelled too, whilst the Ethernet hub is totally self contained just below the output connections for easy and quick access.


The addition of an Ethernet hub is also a minor stroke of genius, especially when you consider that not only consoles but also next-generation DVD players and HD television receivers utilise Internet functionality.


Were you, for example, to combine the 540C with Powerline adapters – such as the Netgear HDXB101s that Ed recently reviewed – then you could get your Internet connection to all your equipment without resorting to a potentially unreliable wireless connection.

Joytech also includes an Ethernet cable for good measure, along with a fairly cheap set of component video, composite and stereo audio cables and the Xbox 360 AV Interconnect Cable. It goes without saying that if you really care about image quality then it’s worth investing in a decent set of component cables – no manner of expensive gear will deliver top notch picture quality if you’re using poor quality cables.


All of which leads us nicely on to the all important topic of image quality. The Control Center is capable of outputting in 480p, 720p and 1080i using component cables and will of course output at standard PAL resolutions too.


Our main source of testing was naturally the Xbox 360; comparing the output from the 540C using the proprietary interconnects cable and using standard component cables to connect to the unit.

When compared it’s clear that both provide decent picture quality, with very minor shadowing on text the only identifiable problem. However, the propriety cable outputted a slightly darker and more saturated image compared to the brighter component output.


This, though, can be accounted for by adjusting the brightness and colour levels on your TV or Monitor and otherwise the picture quality is very decent with no discernable signal loss or artefacts.


What’s useful about having the propriety interconnect cable, as opposed to simply using the standard component cables, is that this leaves you with four open component inputs to use as you please. Therefore, it’s pleasing to know that the quality of the output stands firm and you won’t be resorting to using component cables instead. 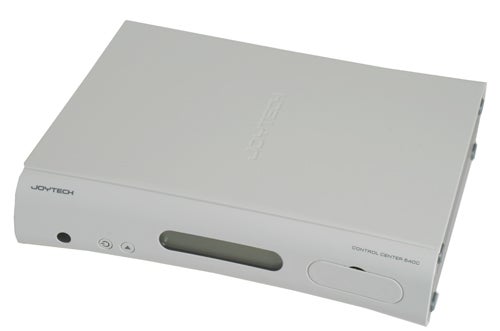 Though the Xbox 360 output is fine, everything isn’t quite perfect when using Nintendo’s Wii. As many will no doubt be aware Wii outputs at a maximum of 480p, and most of the time the Control Center handles things perfectly. However, there are some odd occurrences on some screens, such as the remote strap safety screen, where the display goes blank momentarily.


It must be stressed, however, that these problems appear to be fairly limited and I’ve yet to have any problems during actual gameplay. Moreover, reports suggest that this may well be caused by something Nintendo have done with the Wii signal output and therefore not a fault with the Control Center. Either way, it’s not something worth worrying about too much and general gameplay experience is entirely without fault.


So, is the Control Center 540C your final solution? Unfortunately not, though it does get awfully close to such an accolade. For all the connection options it does give you – and there are many – it does lack HDMI and this is surely going to become and issue in the future. A good TV will often come with at least two HDMI inputs, but this isn’t the case with all TVs and there’s bound to be an increase in the number of units utilising HDMI.


You’ll certainly need one for an HD-DVD player, as will the PS3 along with any standalone Blu-ray player. Then you have media hubs such as the Apple TV and other variants all eagerly demanding attention. 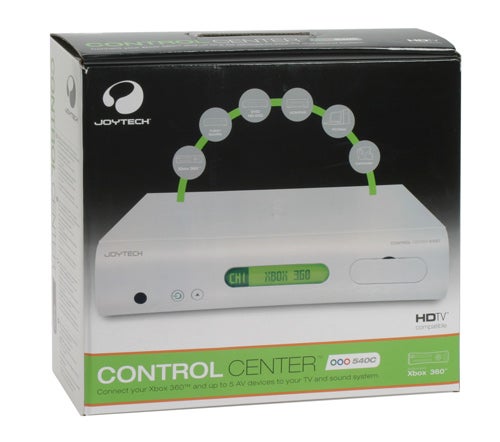 Of course, all of this presumes you’ll need or can afford everything and frankly this scenario will only apply to a very small proportion of people. Moreover, even accepting this premise, it is by no means to the condemnation of the 540C because for the price you really couldn’t ask for a great deal more. If you’re looking an HDMI switcher there are many available, and meanwhile the 540C delivers plenty of bang for your buck and all the component connectivity you’re ever likely to need.


As a component input switcher Joytech’s Control Center 540C is an excellent solution. Decent image quality, a very handy Ethernet hub and an excellent price combine to make it an excellent candidate for your cash.


”’Update 31/01/2007:”’ Joytech has been in contact informing us that they’re working on a discrete adapter to solve the Nintendo Wii output issues, as mentioned in the review. These will be given out free to anyone who needs one, and the changes will be incorporated into future manufacturing runs of the Control Center 540C.