Journey to the Savage Planet offers an atypical open-world feedback loop with some small bits of clever detail but there’s not much else going for it. The writing is tired while the combat is uninspired, with pea shooter guns and a variety of frustrating enemies. Despite this, there’s still no sense of difficulty or tantalising mystery to distance it from its peers or keep you exploring beyond the short narrative – and the addition of co-op feels pointless.

Journey to the Savage Planet understands the joy of scanning things. It’s made me wonder why every game doesn’t have some sort of similar system – discovering the habits of unpredictable creatures in a brave new world is always exciting.

This first revealed itself in the starting area, where I’m introduced to a species of puffy owls. I thought they were cute but a complete pushover – my leading thought process until I slapped an alpha and it combusted right in front of me, stripping me from my meat sack and scattering my collected resources to the wind. There were plenty of accidental discoveries like that during my seven hour playthrough.

The animation team deserve a lot of credit for bringing the world to life. The tiny owlish dino-beasties that roam between food piles titter and roost in packs – I swear I wouldn’t have killed any of them if I hadn’t realised the haptic joy of the power slap, the first means by which Savage Planet allows you to interact with the world.

Eventually you do get a gun, but it’s completely weightless and lacks any crunch – the simple, unabated power of Journey to the Savage Planet’s happy slap reigned supreme throughout the adventure as one of its finest features, letting me send blubbery aliens flying and turning their gooey remains into masses of helpful resources. 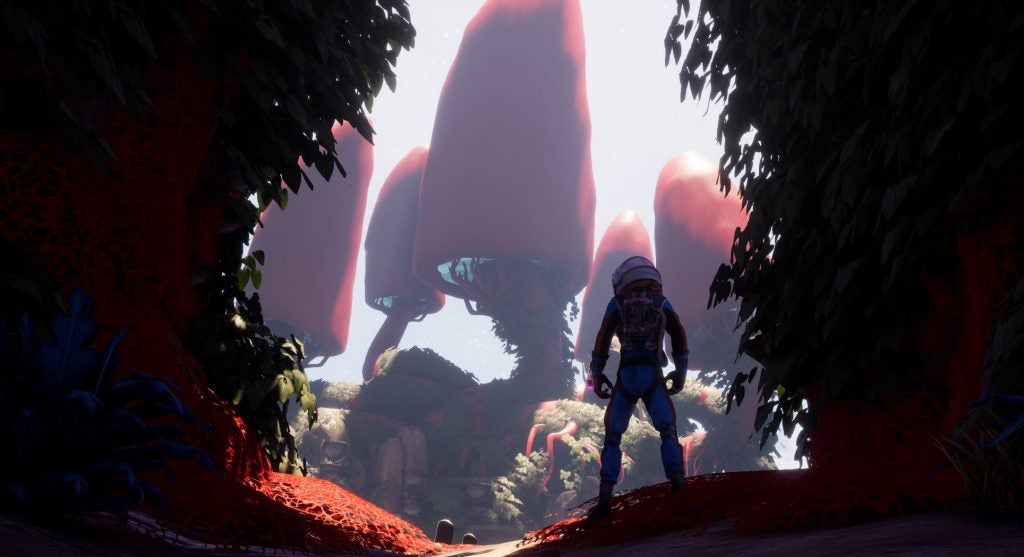 On the way back from my delightful dance with death I encountered one of the game’s finer details. You can scan your own corpse and bury it, turning it into a numbered monolith that reminds you of every time you made a grave mistake – it’s a brilliant turn. Similarly, the notice board in your busted spaceship fills up with postcards depending on where you’ve been, as you frantically search for a way back home from this unknown, hostile environment.

To give you the skinny, it’s an open-world adventure game with some metroidvania elements. The maps are relatively small but hide secrets that you’ll need to figure out later once you’ve earned and learned upgrades. You source these from side quests and materials that you’ll acquire by discombobulating the alien oddities hiding in caves, swamps and on sky mushrooms scattered throughout the world.

Levelling up is achieved by finding and ingesting ‘Orange Goos’, one hundred of which are dotted around the game’s map. It’s not essential that you find them all to complete the game, you just need certain arbitrary upgrades to breach into new areas – one of the exploratory compromises made to push you through its hub worlds.

Each area has its own silly name and peculiar beasts to encounter as you doss around, upgrading equipment and cataloguing the flora and fauna. The creature and plant designs are often interesting – one of my favourites were the Bombodoros, looming plants that drop hulking tomatoes on your head if you don’t dash past. 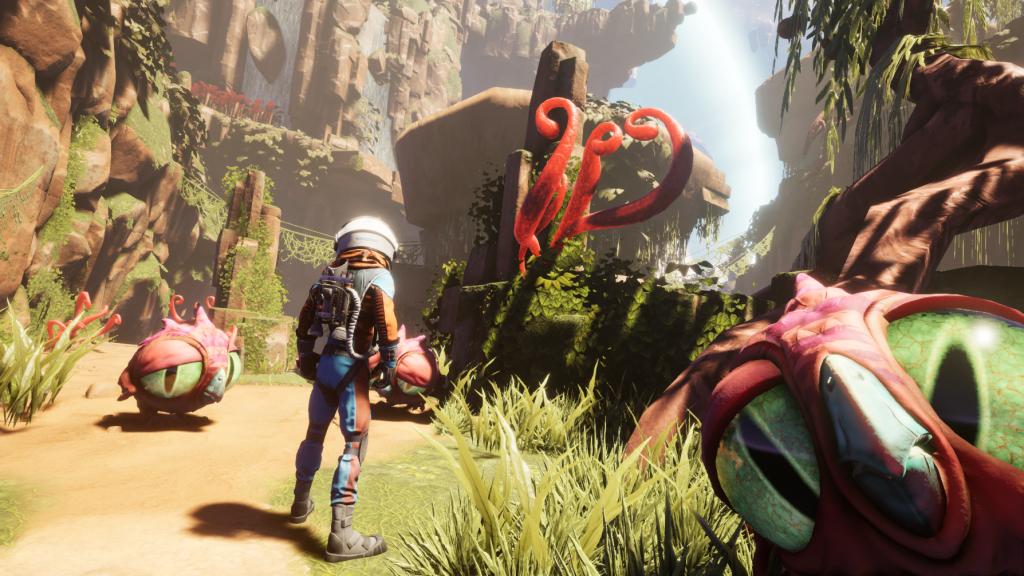 Lots of the same beasts are reused in different areas, but there can be different types of creatures depending on where you find them, like zombified or armoured versions of the puffy owls which ask you to throw acidic plants at them to make them vulnerable, amongst other things. This is tied to one of your main objectives – you’ll be tasked with stabilising some of the native fruits you find to turn them into pieces of equipment in order to proceed.

It toys with the clever idea of letting you tinker with the limits of the world by giving you a throwable bouncy platform, but I don’t think Journey to the Savage Planet accounts for the fact that this all but breaks the game – with a bit of careful momentum there were many ways to get around some of the later puzzles, but when enemies stopped responding and I couldn’t advance quests, I realised the game couldn’t account for what I’d done – which was a shame.

A more holistic approach to the sandbox open world would have pushed this game to be less linear, more ambitious and worthy of your time. I’m sure the speedrunners will have fun getting this one done in under ten minutes, though.

Journey To the Savage Planet offers a feedback loop that we’ve seen many times before, but it certainly isn’t broken and does not need fixing. Darting around the map, unlocking new movement tech and scoffing goo to upgrade equipment is quite fun, even if the unimportance of the exploration I had committed to throughout the first half eventually ground me down and made me want to mainline the story.

Speaking of story, the humour in Journey to the Savage Planet is predicated on irreverence and boasts the same overbearing (often ironic) anti-corporate schtick pioneered and peddled by Borderlands – it pongs of some of the bum notes in The Outer Worlds’ late-capitalist joke glossary. It’s the kind of approach that was clever in Oddworld games in the late 90s but now provides the same feeling as sipping orange juice after you’ve just brushed your teeth. “Because Capitalism” is a genuine punchline, believe it or not. There are a few good laughs – the script can work when its not scraping laughs out of how arbitrary a lot of the game’s puzzles are, which just feels like a colossal self-own. 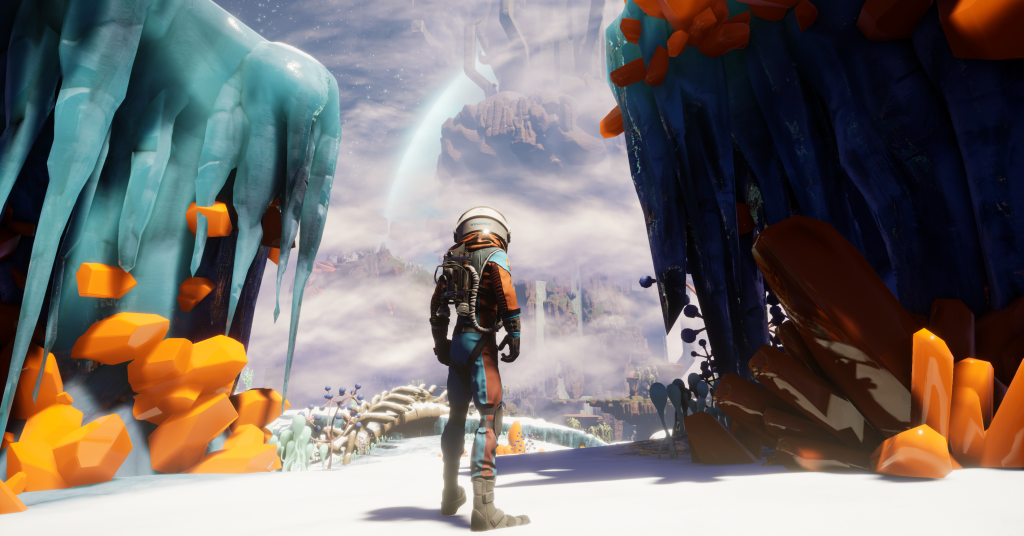 Given that this is an open-world game and a co-op one at that, it makes the right decision by not laying it on thick with the story (looking at you, Anthem) but it certainly could have used a few moments of conversation. There’s no NPCs to talk to, so you’re left at the mercy of your hit or miss gag machine AI companion and the advertisements and transmissions from your ship’s computer – if you can bear to watch them.

Once you make your way through Savage Planet’s three hub worlds, the game flips the story switch back on for the last half hour and delivers a yawn-worthy ‘indictment’ of space colonisation and capitalism via a physical manifestation of greed – I don’t know why I’m refraining from spoiling it, but given what you’re asked to do throughout the game, it’s about as flat as a week-old glass of Coke.

The spawning system is a bit odd – enemies return as long as you don’t look at them, and there’s an abundance of replenishable items to ensure the difficulty never spikes too high, which it probably should at some point.

Guns are pathetic, with no feedback or vibration and nimble enemies to shoot, it’s truly laborious to try and kill creatures like the floating jellyfish and the Pikamander, which has a tiny hit box on its exposed tail. I’m sure it might be easier with a mouse and keyboard but even with auto-aim on and a console controller in hand, you’ll wonder why somebody didn’t point out how dull the weapons feel. 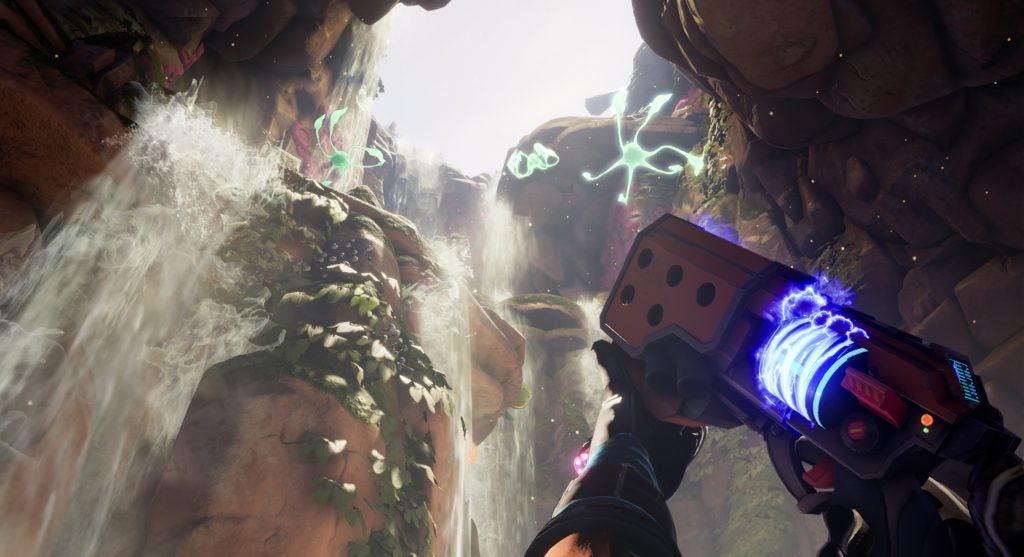 A lot of the platforming is satisfying but the upgrade-necessary puzzles can mostly be gamed if you know where to place the bouncy gel. After a few sections,  missions also become something of a blur – every unnecessarily large new area feels arduous to explore, a bullet sponge gauntlet to reach a new monolith with a crystal, where you’ll brandish either a syringe or a drill so you can sup the arbitrary upgrade juice. I explored a lot and completed plenty of the side quests, but even so, I had to fight against the instinct to just dash past all the enemies to get to the objectives as the game wore on.

Without any semblance of difficulty, what’s the point of engaging? Fortunately, the boss fights split up each section of the game nicely, and ask you to consider what you’ve learned to defeat them, so there is a small chance of death. These were considered moments of production value in a mostly wishy-washy game.

Given that it has a Dark Souls style retrieval system (that is often haywire and can spawn your kit out of bounds) I’m puzzled by why they didn’t go all the way and make the combat somewhat challenging. Perhaps it was so they could reach as wide an audience as possible without frustration, but I struggle to think of the unique selling point of a game so derisive and easy. 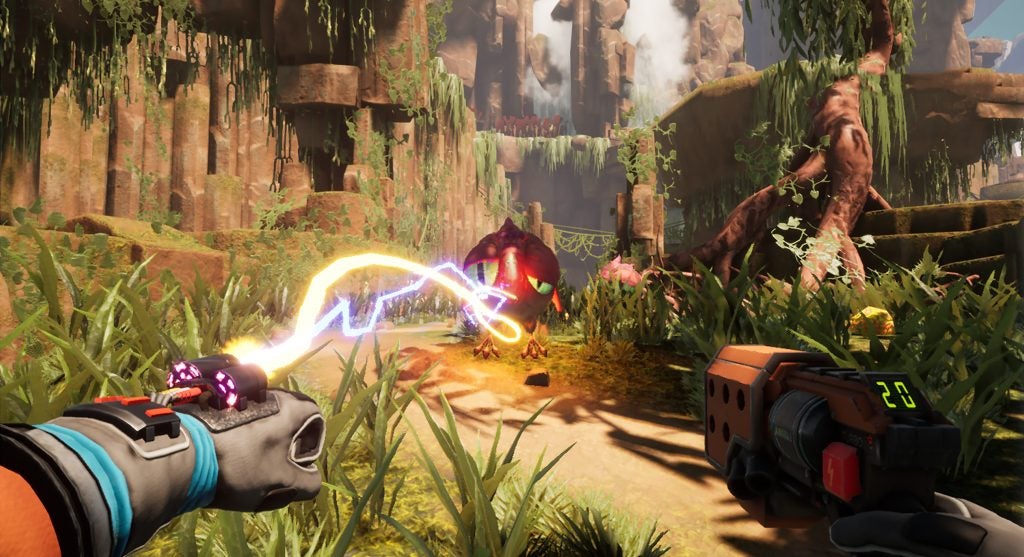 I don’t know what makes Journey to the Savage Planet stand out in a market saturated by open-world games. The setting isn’t anything new and feels like its been worn out over the course of the past year. The co-op itself is fairly easy to set up but is full of odd decisions. Your progression doesn’t track between games, even down to the side quests, but you can complete quests and craft equipment for your partner if you want to. It’s a strange setup that destroys potential replay value.

It would’ve been nice to jump into my friends game with a few more upgrades to help them with a boss or new area, but then again, when the difficulty is non-existent, my existence in their world feels pointless. The platforming is quite fun and the feedback loop works, so at the approachable price point, if you want something absent-minded to play as background noise for a catch-up conversation, then sure, but beyond that… it’s probably not worth the seven to ten hours of effort to complete it.