So this is ultimately the biggest talking point of the Jolla tablet. What exactly is Sailfish OS 2 and how does it compare to the competition? It’s the latest version of the open source Linux-based QT platform that’s been built from the ground up with privacy as a core principle for the OS. Jolla says it will not share your data, or let third parties monitor tablet activity.

The Jolla community plays an important role in shaping the operating system and helps decide what changes will be implemented in the future. If there’s something that a user believes Sailfish is lacking, the Jolla team will try to address it, whether that’s doing it themselves or with help from its community of developers. It’s a refreshing approach, but the question mark still remains whether this can really be a mainstream alternative to iOS, Android and Windows 10.

Sailfish’s big play is on gestures. Most tablets rely on a similar form of interaction, but in the case of the Jolla tablet, there’s no physical buttons or keys at all as an alternative to touchscreen navigation. Getting to grips with Sailfish does take time, especially remembering what swipes do what. For example, there are little glowing orbs that appear in the corner of menus that let you know when you can skip back a page. Like a sub category in the Jolla Store. You can also drag your finger down from the centre of the screen to reveal actionable features within whatever app your running, like saving an image for example. There’s a lot to take in, but it does work and you won’t miss those physical buttons. 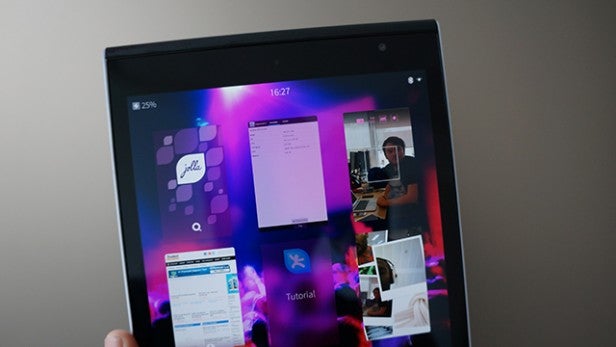 Thankfully there’s a handy tutorial to take you through step-by-step on how to get around the interface. From the lock screen you can swipe inwards to unlock. There’s no Android-style camera shortcuts or notification panels here. It’s about keeping things simple and giving you access to the features you really need.

If you swipe left, you’ll see what is essentially a notification home screen. It’s here where you can see updates on apps and downloads. It’s also where you can switch on Airplane, Wi-Fi and Bluetooth modes. There’s also handy shortcuts to quickly search the web using Jolla’s custom browser, find out your location, make a note or take a selfie.

The main homesceen is where running apps live. It’s looks alot like the Android or iOS multitasking mode where you can tap to resume an app or press down on it to close. You’ll also spot the battery status and both Wi-Fi and Bluetooth notifications at the top of the UI.

Swipe up, to bring up the app drawer and it looks like a familiar place. Icons all have their own unique designs giving the OS a more playful feel than iOS, Android and Windows. Here you’ll find the typical native apps for the things like the browser, email, maps, gallery and document apps. There’s nothing really out of the ordinary here and there’s nothing in the way of bloatware. 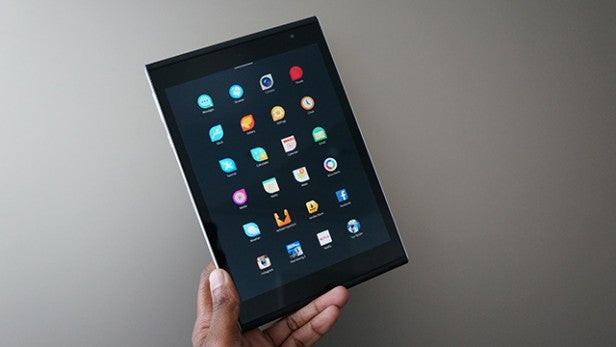 The app drawer is where you can locate the settings. It’s here that you can set up accounts, view apps and access system settings. The latter lets you personalise the home screens with ‘Ambiences’. These are basically pretty, stylish themes that are a notch above most Android wallpapers.

One of the most interesting aspects of Sailfish is the Android support. It’s an additional option and can be switched on giving you access to Android app store fronts like Aptoide, Appstor and Yandex.Store. You’ll notice that I haven’t mentioned the Google Play Store and that’s because it’s not supported.

If you opt out of the Android app support, then it’s down to the Jolla Store to cover all of your app needs. This is the Linux-based app store where you’re going to struggle to find the likes of Facebook and Twitter in favour of lesser known games and content. There’s some nice touches to the look and feel of the Store, like the activity feed where you’ll find a stream of comments from users alongside app reviews.

But if you care about those familiar apps, the Android app support is a must. The Jolla Store will no doubt continue to improve, but if you’re used to the luxury of iOS and Android, it’s a disappointing place to browse right now.

It’s difficult not be drawn in by the sleek yet simplistic look of Sailfish. The gesture-centric navigation is great to use once you’ve remembered them. It’s the app support unfortunately that remains a major gripe, even with the addition of Android support. 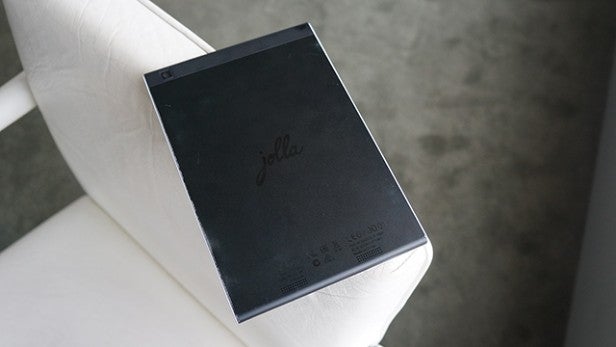 It’s unfortunate that with such impressive software, the Jolla tablet is let down by the components powering it. There’s a 64-bit quad-core Intel Atom Z3735F processor clocked at 1.8Ghz accompanied by 2GB RAM. That’s a similar specs outlay that you’ll see on 7-inch Windows 10 tablets. On paper, the clean, bloatware-free slate looks well equipped but in reality, that’s not how things work out.

There’s no problems swiping through UI, but the sluggishness creeps in when you’re launching apps. It’s just not as snappy as what Google, Microsoft and Apple have to offer. Things do seem to have improved with the latest Sailfish OS update, but some of the performance issues still persist.

It’s a bigger deal when it comes to gaming. The Jolla tablet simply doesn’t appear to be built to handle powerful games. I downloaded Real Racing 3 from one of the Android app store fronts. This is the game I always turn to get a good indication of how well phones and tablets can deal with graphically demanding content. From the start, it had a struggle on its hands. Moving through game menus is laggy and once you get on the track, gameplay is choppy and there’s a noticeable drop in frame rates.

This could explain why the Linux-based Jolla Store is deprived of some bigger apps. I suspect they’re not on there because the tablet’s unique operating system is not optimised to handle them. I had similar issues running Instagram and Facebook.

Benchmarking something like the Jolla tablet is a more difficult to do compared to an Android or Windows tablet. But I was able to get hold of a few from the Aptoid Appstore to see if some of those worrying performance issues are backed up by the numbers. Running the Geekbench 3 multi-core test, it scores a 2,040 which is higher than the Intel-based Tesco Hudl 2 (1,914) but actually lower than the now ageing Snapdragon-powered Nexus 7 (2,672). The iPad Mini 3, which runs on a dual-core processor manages 2,424 to give you an idea of how it compares to more expensive tablets.