What is the Jolla Tablet?

The Jolla tablet is a 7.9-inch (ish) tablet that’s very different to any Android, Windows 10 tablet or iPad you’ve seen. It’s packed with a gesture-based operating system called Sailfish. If you haven’t heard of Sailfish, it’s a Linux-based platform that’s been developed by former Nokia and Intel employees, evolving from the MeeGo OS that Nokia abandoned many years ago.

This is the Finnish company’s first ever tablet and was built after the firm raised a monumental $2.5m through crowdfunding website Indiegogo. Priced at an affordable £188, the Jolla tablet certainly makes a better impression than the Jolla Sailfish OS smartphone did. But has Jolla done enough this time to give Apple, Google and Microsoft something to worry about? 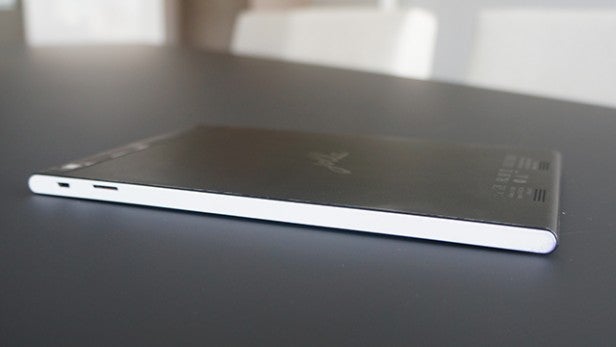 If you want a good idea of how the Jolla tablet measures up to the competition, it’s very similar in size to the iPad Mini 3. Unlike Apple’s tablet, it lacks the same, stylish exterior and spotless build quality. There’s no metal here, it’s an all-plastic affair. It’s not cheap and tacky, but it’s has a more mid-range Android tablet feel than something as polished as an iPad, or one of Samsung’s flagship tablets.

Jolla does at least try to make the most of that plastic body. Around the back there’s a matte black finish with the Jolla logo centre stage and the 5-megapixel camera tucked up into the corner. At the bottom you’ll find dual stereo speakers. Up front, you’ve got a black bezel that’s thicker above and below the screen with the front-facing camera sensor the only redeeming feature breaking up an otherwise plain, clean look. There are no physical buttons but that’s not surprising for a software approach that negates the need for them.

Jolla mixes the colours up adding a flat white plastic on the tablet’s trim and that’s where you’ll find the standby button and volume rocker tucked up on the left hand side. The micro USB charging port and micro SD card slot are over on the right. That expandable storage will give you add an extra 128GB to the tablet’s in-built 32GB or 64GB of space. That should be plenty of room for storing content for most. The headphone jack is easy to miss, but that’s nicely tucked away inside one of the curved corners. 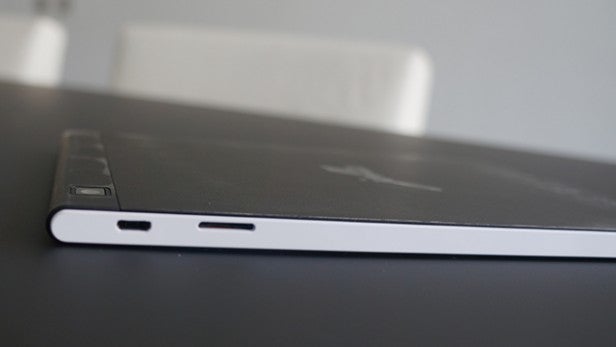 At 8.3mm thick and weighing in at 384g, it’s not the slimmest or the lightest tablet, but it’s comfortable to hold in one hand. It’s pretty wide though, which makes it a stretch to hold in the palm of your hand. The most worrying aspect about the Jolla tablet is the creaking build quality, which is most noticeable near the top end of the tablet. I’ve not had any issues, but I’d be concerned how it would react to more generous pressure.

Jolla has officially unveiled a host of additional accessories for its tablet and it definitely could do with a case based on my experience. My review sample already has signs of wear with the black plastic chipping away on the back. The top and bottom ends of the tablet can quickly get grubby – as I found when I accidentally leaked a pen over it in my bag, which stained the corners of the body.

Overall, it’s a nice-looking but pretty uninspiring tablet. Samsung and Apple certainly won’t be quaking in their boots that’s for sure. 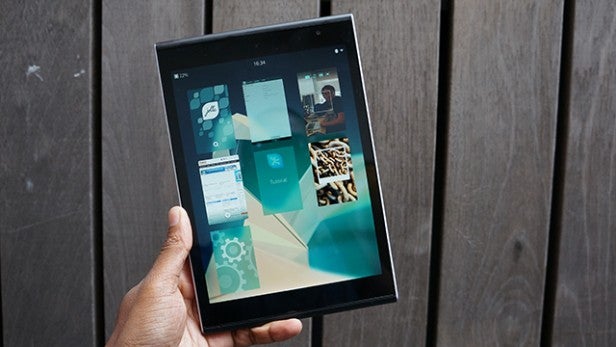 With the Jolla tablet’s display, the comparisons continue with the iPad Mini 3. At least with the specs sheet. There’s an 7.85-inch IPS LCD screen making it marginally smaller than the Apple tablet’s. But it does pack the same screen technology with a 2048×1536 resolution and 330 ppi pixel density – the same as the Mini. The screen offers a solid viewing experience overall especially married with Jolla’s heavily stylised OS. It’s sharp, with no signs of pixellation. But there’s still room for improvement.

Side by side with an iPad Mini 3, whites are not exceptionally accurate. Images and web pages simply don’t pop in the same satisfying way as an AMOLED screen. I’d have much preferred it if the maximum brightness had been cranked up a notch as things have a tendency to feel a little dingy. That’s not helped by the fact that the Sailfish UI predominantly favours darker, richer tones and colours.

For watching video, black levels and contrast make a good impression. Colours are not over saturated as can be the case on AMOLED-packing tablets. Making my way through a big session of Parks and Recreation on Netflix, it’s a more than capable tablet for a box set binge. Viewing angles are strong as well with no noticeable drop in image quality when you’re watching from more acute angles.

Jolla’s display largely covers the bases well, just don’t expect anything groundbreaking. That’s hardly surprising though when you keep in mind that this is a sub-£200 tablet.