The JLFFW1818 is a new entry-level model from John Lewis’s wide range of own-brand fridge freezers. It boasts an A+ energy rating and plenty of useable space relative to its size, while on the outside the prominent handles and subtle John Lewis logo look very classy. The height of each door is the same, but you actually get a 60/40 capacity split in favour of the refrigeration.

The fridge has multi-air-flow cooling to ensure even distribution of cold air and, claims John Lewis, keeps food fresher for longer by stopping it drying out. There’s a single LED lamp at the top of the fridge, which also integrates a single push button fridge temperature control with LED indicators. The only control for the freezer is a Fast Freeze button.

John Lewis is offering a lot of style and cooling capacity for a very reasonable £500, but is this the bargain it appears to be? 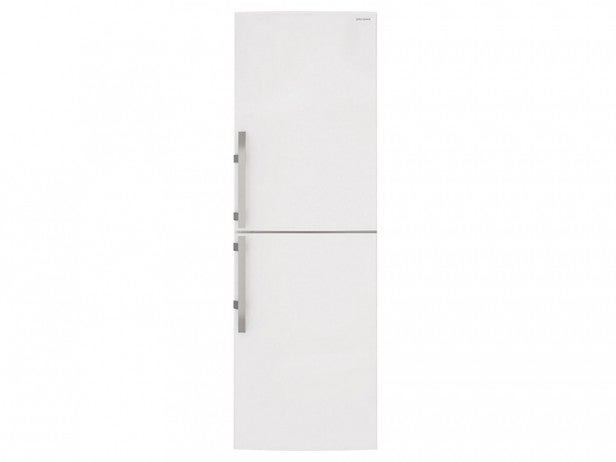 The smooth, clean white panels of the JLFFW1818 are set off with a chunky pair of protruding handles finished in contrasting dark grey steel colour. It’s quite a sophisticated look and the sense of quality is enhanced by the very solid-feeling handles. The interior of the fridge compartment is more mundane and traditional. The clear plastic door pockets and twin salad drawers are a reasonable size, the glass shelves are easy to clean and the chrome wire bottle rack comfortably holds four large bottles.

The lighting comes from a bright white LED that turns on gently when you open the door. However, its position at the top and to the side means its light will almost certainly get obstructed if you load up the top shelf with, say, bottles and jars. The yellow LED temperature indicators are basic but functional, although we would have liked some control over freezer temperature. This was particularly true when we realised our frozen food sample was held at -20 degrees – some 2 degrees lower than we’d expect a freezer to run at. The freezer offers three deep drawers with transparent fronts and large integrated handles. 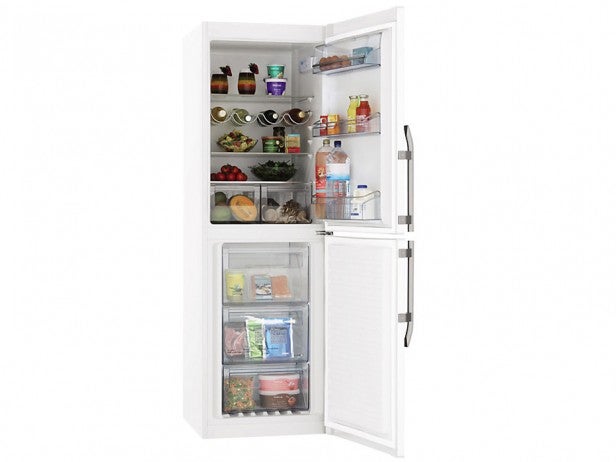 Without too many fancy gadgets or specialist compartments taking up valuable chiller volume, you can use a great deal of the JLFFW1818’s available 198 litres of fridge space. The two drawers pull out easily, but the right-hand one does require the door to be opened past 90 degrees. The doors are reversible if you have a wall or other obstruction on one side, though.

In addition to the glass shelf on top of the salad drawers, the two other glass shelves and bottle rack have several shelf positions with the top shelf ideal for taller items. Arguably, a third moveable shelf might have been more useful than the bottle rack given the very large lower door pocket that is excellent for bottles.

The freezer’s 108-litre capacity is good for a fridge-freezer under 2 metres tall, and the three drawers offer a lot of deep storage space. Sticking with being a traditional freezer, the JLFFW1818 doesn’t offer fancy features such as floating ice-cube trays or freezer door pockets for smaller items. 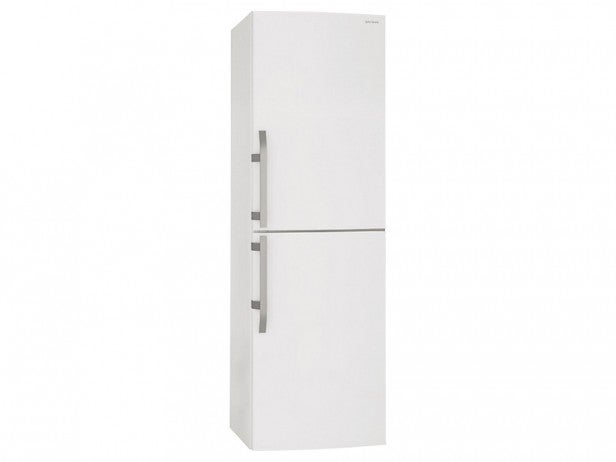 A bright yellow leaflet included with the instructions graphically explains that the user should expect the JLFFW1818 to make some odd noises – creaks, pops and groans – and it certainly does. It produced a wide repertoire of pops and gurgling noises for the first hour or so, most likely indicating that the engineering technology of this John Lewis model is more traditional and proven than cutting edge.

It was difficult to accurately average the noise level of what sounded like chronic fridge indigestion, so we waited until it had stabilised. When the compressor is running, the JLFFW1818 measured around 43dB, some 3dB higher than John Lewis’s own quoted figures. While not as silent as some, it remains pretty quiet and only just above the normal ambient noise of the average home. Excluding the odd burp.

With the JLFFW1818 loaded at 0.5kg of food per 10 litres of cooling space and 1kg of food per 10 litres of freezer space, we measured the temperature at the top, middle and bottom of the fridge and freezer compartments over a two-day period. We set the fridge at 4 degrees C, with the freezer running at its non-adjustable temperature. We used 2 litres of tap water with a temperature probe in the middle to test how well the freezer chilled fresh food and how well the same food would survive a three-hour power failure.

In the fridge compartment there was quite a range of temperatures on offer, despite the air circulation cooling function. The top shelf averaged 6 degrees C, with the bottle rack, salad drawer and bottom shelf averaging 4, 3 and 2 degrees respectively. With the compressor running cycles of just under two hours, the top and bottom shelves fluctuated by +/-2 degrees. This meant that the air around food on the top shelf would reach a rather warm 8 degrees C at several points during the day.

The wine rack area and salad drawers proved most consistent, with just +/-1 degree fluctuation. The wide range of temperatures – from zero to 8 degrees – again hints at the technology in this John Lewis model being somewhat behind the curve. 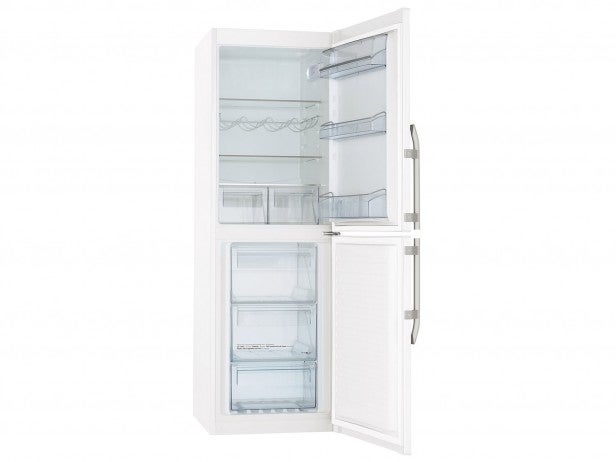 It’s very much the same story in the freezer compartment, too. The entire compartment and the core of our frozen food averaged -20 degrees C throughout the test, but the top drawer varied wildly during the compressor cycle. It dropped to -27 degrees and slowly rose back up to -13 degrees every two hours before the compressor would kick back in.

The freezer insulation proved itself to be only fair by modern standards, as the three-hour power fail test saw the average air temperature rise 12 degrees to -8 degrees, although our frozen food gained only 4 degrees during this time. Based on the fact that the power might go off when the top drawer was already as high as -13 degrees, we wouldn’t want to give the JLLFW1818 a food safety limit of much more than 4-6 hours. 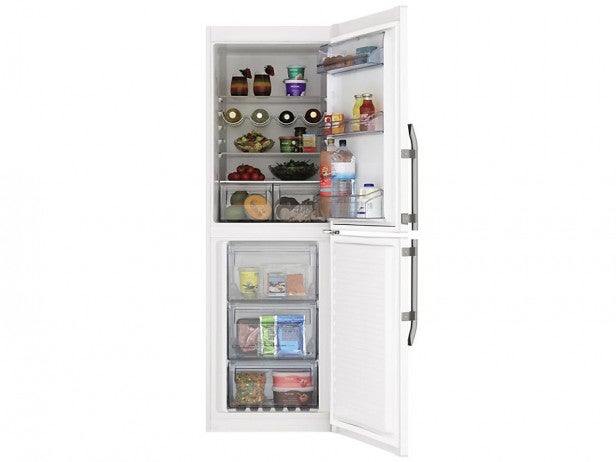 The A+ energy label quotes electricity consumption for the JLFFW1818 at 313kWh per annum. Our own tests bore out this claim and we calculate it would draw around 317kWh, costing about £47.55 each year (at 15p/kWh). These figures are based on a two-day test at an ambient room temperature of 18 degrees C and six door openings per day. As always, if you often have a hot kitchen and a big family using the fridge freezer regularly, these costs will increase.

Should I buy the John Lewis JLFFW1818?

Behind the smooth lines and designer handles the JLFFW1818 is a fairly basic fridge freezer running old-school refrigeration technologies. That means it falls a little behind more modern designs in terms of energy efficiency, cooling stability and various noises, and the features count is fairly low. Yet what it does offer is an awful lot of cooling capacity, great exterior style, a John Lewis badge and a three-year guarantee for less than £500.

A functional but unexceptional fridge-freezer – it’s worth considering if you’re on a budget, but you could probably do better.