If you're after a pair of noise-cancellers, but your budget won't stretch to the Sony 1000XM3, Bose NC 700 or B&W PX7, then the JBL Tune 750BTNC are a great choice, offering decent sound and good value for money. Noise cancellation isn't great, and units such as the AKG Y50BT and Urbanista Seattle offer better mid-range performance. Nevertheless, these are enjoyable and energetic-sounding headphones

The JBL Tune 750BTNC are full-size headphones that look like, and offer similar features to, some of the most popular cans available.

They don’t feel or sound as good as the Sony WH-1000XM3, and neither is their noise cancellation in the same league. However, at less than half the price the JBL Tune 750BTNC are a fine choice for those on a more sensible budget.

The JBL 750BTNC style mimics that of some of our top-rated units. These are full-size headphones, with the cup padding sitting around your ears rather than on them.

Every visible part of the JBL Tune 750BTNC is made from plastic. The cups, the leather-like padding, the headband; you find even a flash of aluminium on these headphones.

There’s likely some steel inside the headband, but it isn’t visible. The JBL Tune 750BTNC are available in white, blue, black, and the orangey-red colour of the headphones on review – and all are colour-matched throughout. 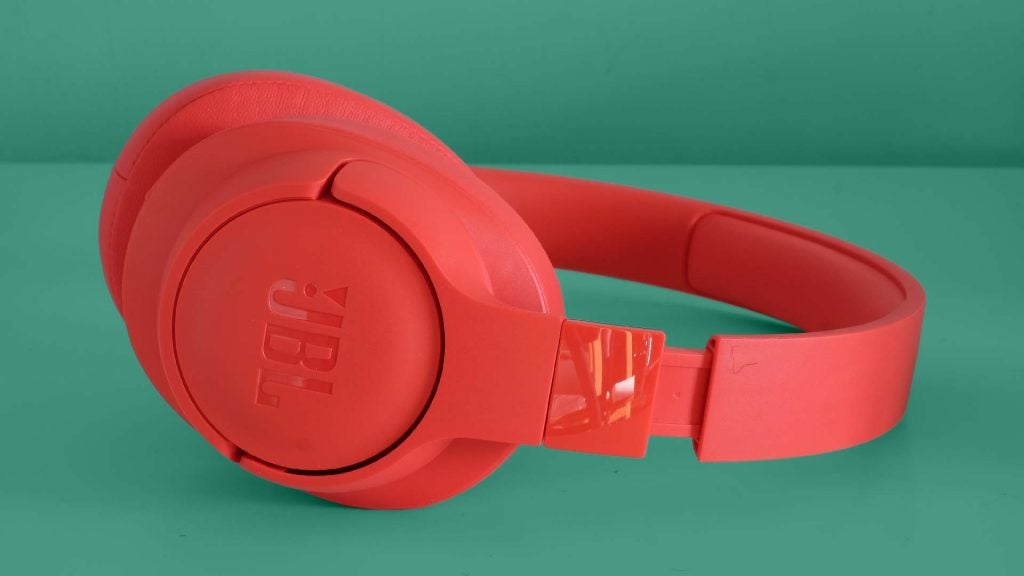 From a distance, these headphones appear to look like any other for which “style” is the priority. Up-close, the buttons on the right cup look no more than functional. The embossed JBL logo on the cups is large enough to function as a portable ad for the brand, something you don’t get with the Sony WH-1000XM3.

The JBL Tune 750BTNC aren’t the height of class, then – but they do look the part. And they’re almost creak-free, too; plus they’re a great option to wear whilst running since they’re lightweight yet sit firmly on your head. 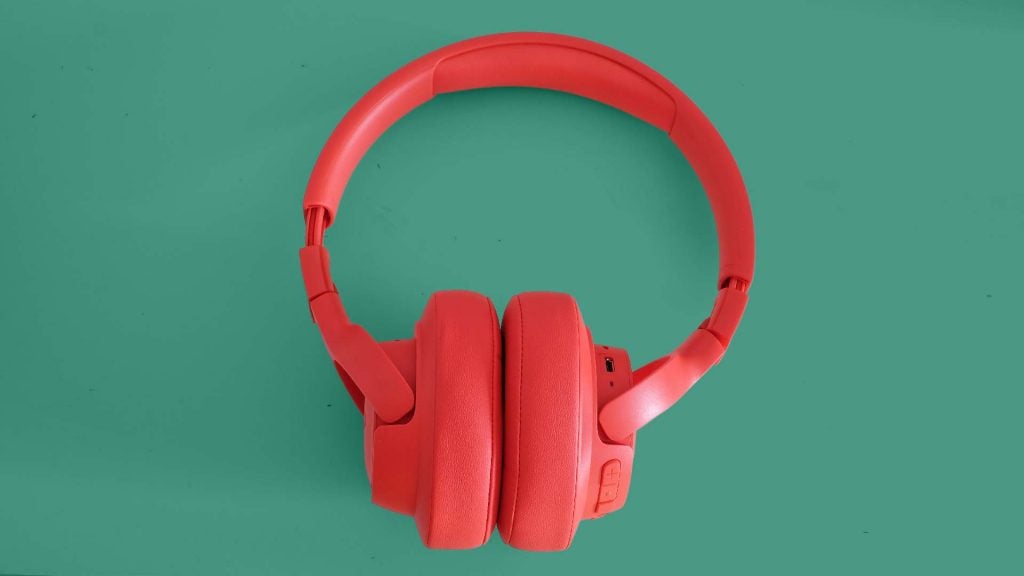 Not everyone will appreciate the fit, however – you can feel their clamping force; we’re far from the light touch of the Bose QC35 II here. Relatively small holes in the pads provide little room for bigger ears, too.

However, our experience was that the JBL Tune 750BTNC become more comfortable over time. The thick padding to the headband ensures there are no niggling pressure points, and the cup pads, too, are dense. After four hours in position, my ears weren’t complaining.

Note, too, that the JBL Tune 750BTNC fold up for easier bag-stashing. There’s no case in the box, however. 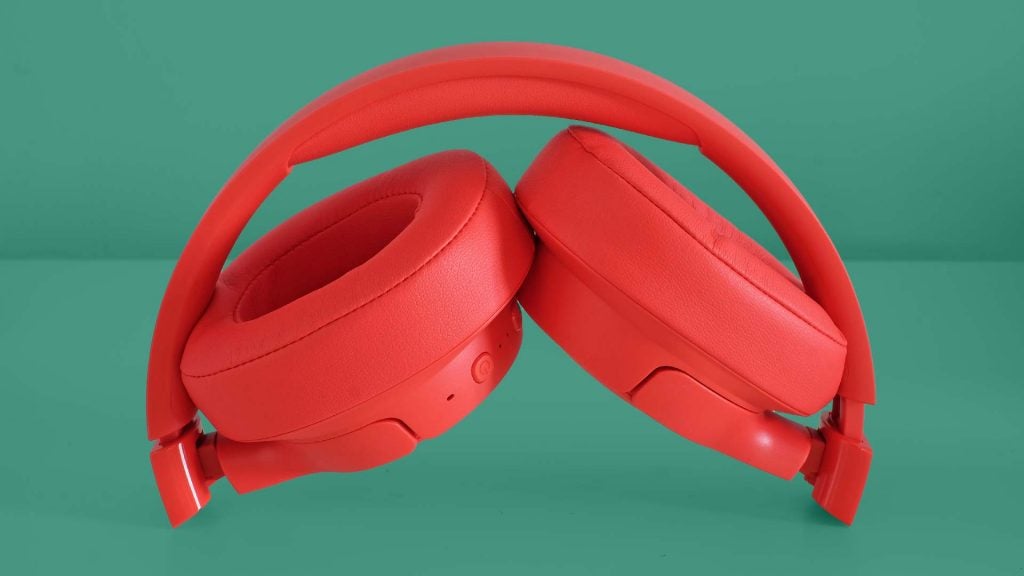 The inclusion of active noise cancellation gives the impression that the JBL Tune 750BTNC offer more than some headphones at the price. The majority have only the basics, such as wireless.

It’s disappointing to learn then that the ANC here isn’t hugely effective. It removes a fair amount of low-frequency engine noise – which is the primary job of any noise-cancelling set of headphones. Also eliminated is the hum of air conditioning units. However, the JBL Tune 750BTNC barely touch any higher-frequency sound, instead adding a light bed of hiss, which will noticeable in a quieter room.

I used the JBL Tune 750BTNC’s cancellation on public transport, but would turn it off in an office where nearby conversations are the bigger issue – something these headphones weren’t able to tackle. The mids on these headphones are slightly more coherent with cancellation disabled – more on that later.

The JBL Tune 750BTNC deliver a very basic take on active noise cancellation, then, with no Ambient Aware function to let you hear outside noise with the press of a button.

The headphones have a dedicated button for switching ANC off. Just press it for two seconds to toggle. 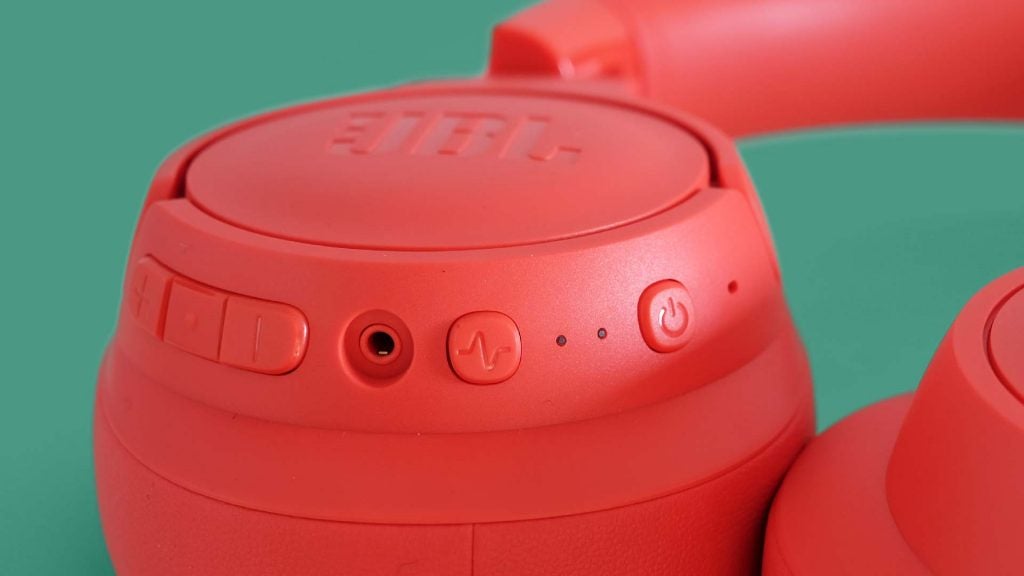 Earlier I said the buttons look a little cheap; however, they work very well. You get the same trio of buttons that feature on an in-line remote, and they have contouring for easy use. I tended to use these controls only to skip tracks – and the JBL Tune 750BTNC give the usual “double tap” over to waking up your phone’s digital assistant. But you can still move between tracks using a long-press of the volume up/down buttons.

Battery life here is a generation or two behind the best around, but will still easily be good enough for most of us. You’ll get around 15 hours from a single charge if you use wireless, or up to 30 hours with the cable plugged in and active noise cancellation turned on. These headphones have a little 2.5mm socket on the right cup – bear that in mind if you want to buy a long cable for late-night TV viewing. 3.5mm is the standard headphone jack, not 2.5mm. 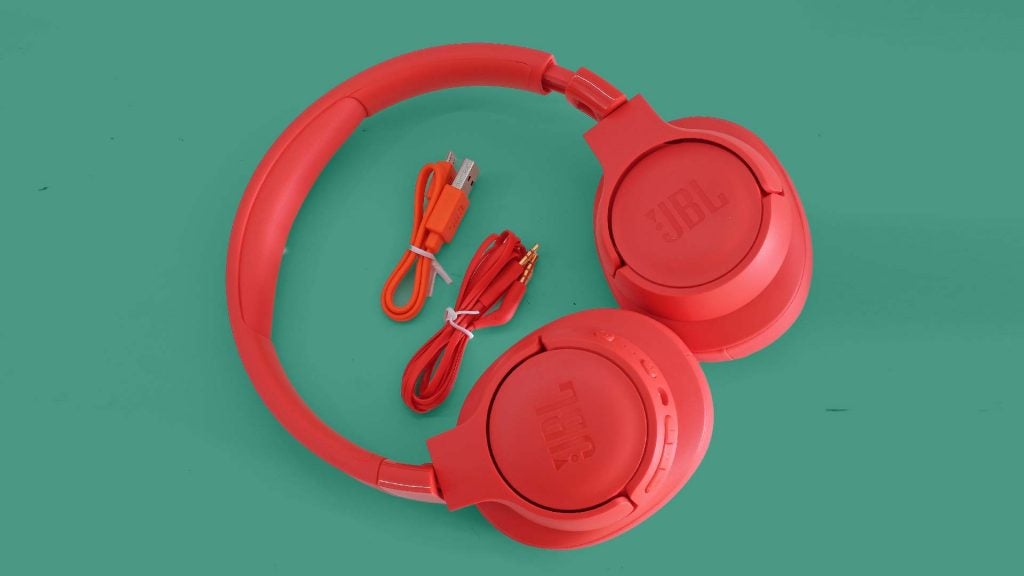 The JBL Tune 750BTNC’s use Bluetooth 4.2 and support only the basic SBC codec, not aptX. However, I tried streaming a YouTube video with the headphones and lag is minimal enough to make it a non-issue. Plus, there was no glaring sound quality deficit (the bit-rate of SBC depends on its application by the Bluetooth chipset).

The JBL Tune 750BTNC feature standard 40mm dynamic drivers and “JBL Pure Bass” sound. This causes concern, suggesting the type of bass you hear in headphones such as the Sony MDR-XB650BT. However, there’s nothing to worry about here.

The bass here is boosted, but the extra power is in the low bass and sub-bass zone. It is subwoofer stuff that can be emphasised without affecting the rest. 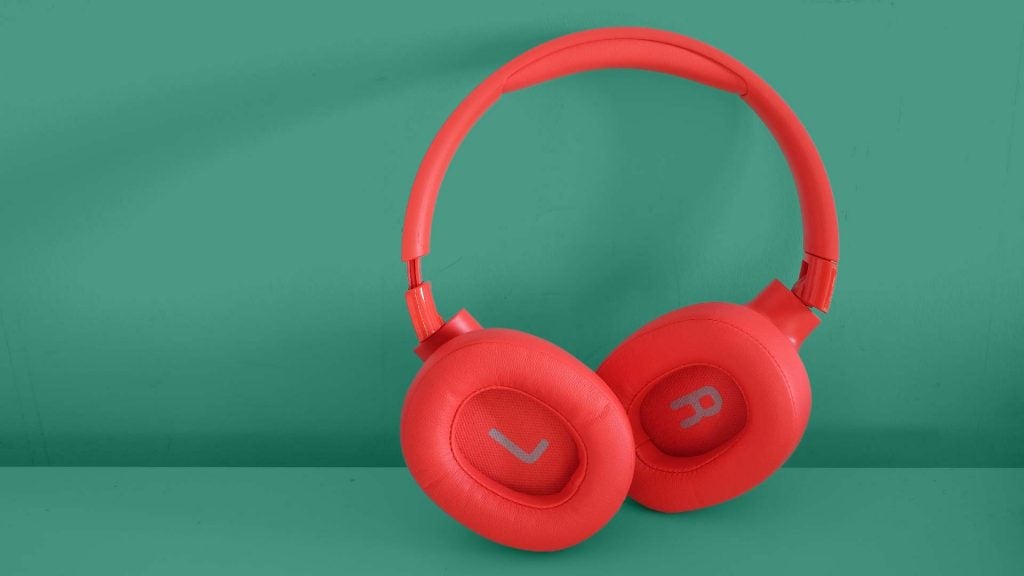 The JBL Tune 750BTNC’s bass isn’t perfectly stage-managed, but this only becomes evident when listening to less well produced albums. Plus, it adds wholly beneficial energy to pop and electronic music.

Using such a specific bass boost means JBL didn’t really need to offset it with another boost higher up the frequency range – but it does so here. The upper-mids are also promoted, a classic balancing act also used in the JBL Tune 650BTNC.

This becomes a little more pronounced when active noise cancellation is switched on, which means acoustic piano lines can sound more natural with ANC turned off.

The Audio-Technica ATH-M50xBT perform this “extra lows, extra highs” act better than most other sub-£200 pairs, so how do they compare? 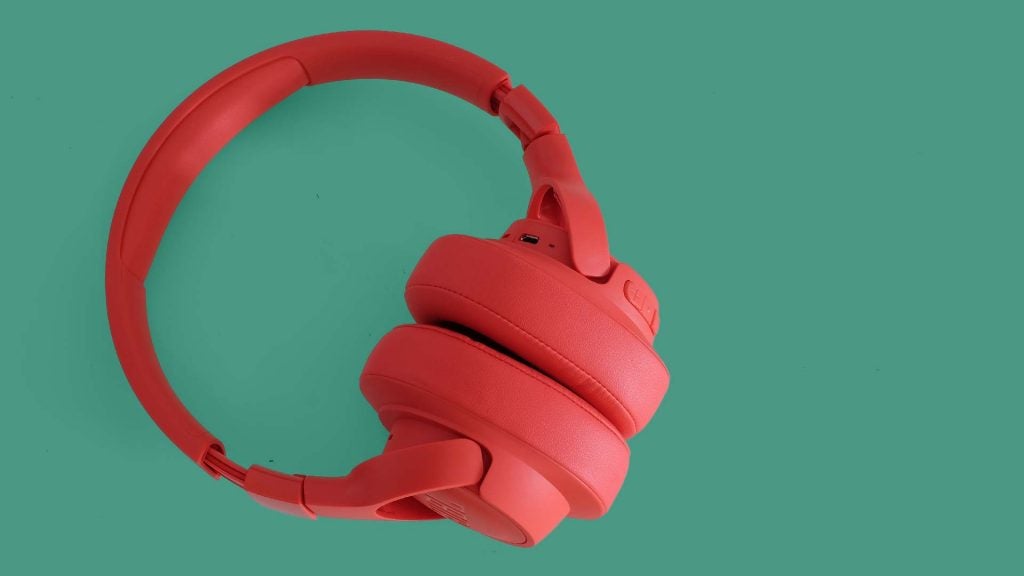 The Audio-Technica headphones display a significantly wider, more expansive sound. However, the JBL Tune 750BTNC offer solid stereo separation within their narrower sound field. They also have less mid-bass bulk than the Audio-Technica, suggesting the bass boost is actually more targeted – or at least localised – here.

Mid-range texture and tone is the main weak point in the JBL headphones. There’s a slight vacuum in the mid-content, below the JBL Tune 750BTNC’s promoted upper-mids.

This gives vocals a slightly colder character. Voices produced to sound natural and raw seem underserved. For example, Jarvis Cocker ends up sounding soggy in his Chilly Gonzales collaboration Belle Boy, compared to the same track through the Urbanista Seattle Wireless or the AKG Y50BT.

Those non-ANC headphones are cheaper than the JBL Tune 750BTNC. But, in fairness to JBL, they’re category outliers in their ability to deliver engaging sound on a budget without significantly neglecting any part of the mid-range. 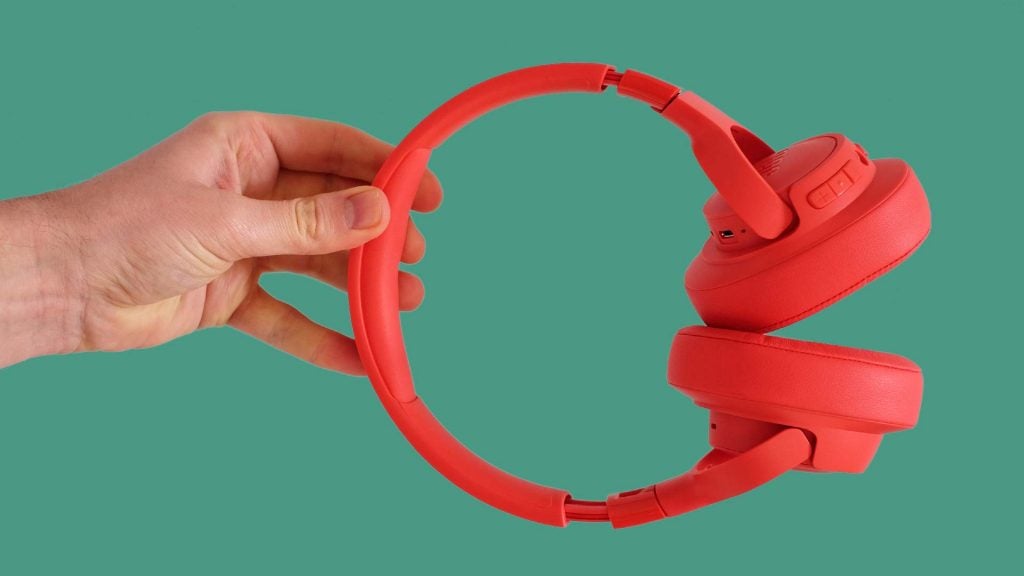 Should you buy the JBL Tune 750BTNC?

They sound good, wear surprisingly well over long sessions – even if they initially seem a little tight. Noise cancellation isn’t great, but it’s handy for public transport and planes.

Long-standing affordable wireless favourites such as the AKG Y50BT and Urbanista Seattle handle the mid-range better for fuller sound, but the JBL Tune 750 BTNC are enjoyable and energetic-sounding headphones nonetheless.