Soundbars are one of the home cinema market’s biggest success stories, and it’s not hard to see why. They’re convenient, clutter free and more often than not they deliver sound quality almost as good as a proper home cinema system. JBL has muscled in on this lucrative market with a range of three
soundbars, including the SB200 we have here. The SB200 is the middle model of
the trio, sitting above the entry-level SB100 and below the SB400, which
unlike the SB200 comes with a separate subwoofer.

The SB200 is primarily designed to boost sound quality from your TV, however you can also connect another sound source such as a Blu-ray or MP3 player. There’s no built-in disc player or multichannel processing though – it’s a straight-up stereo soundbar that delivers 120W of audio power and decodes Dolby Digital. However, the most eye-catching feature is built-in Bluetooth, which makes it easy to enjoy music from mobile devices.

The SB200 is a good looking unit, but in an understated, discreet way that won’t draw attention away from your TV. It’s curvy in all the right places and finished entirely in black, with a cloth mesh covering the front and a glossy trim surrounding it. The only real detail you can see from the sofa is a small silver JBL logo. 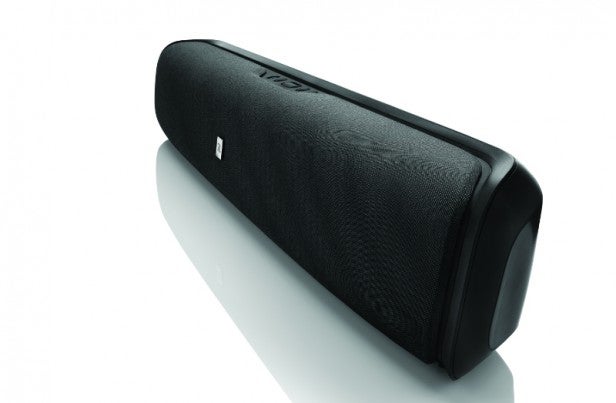 Build quality is solid, although the gloss black trim is plasticky – a far cry from the opulence of B&W’s Panorama 2. Size-wise it measures 901mm wide, making it suitable for 32-inch TVs and larger, but the 103mm also makes it fairly chunky. The unit can be placed on a tabletop with rubber feet underneath to quell vibration, or mounted on a wall using the supplied bracket.

On top of the unit is a small row of buttons that control power, source input, Bluetooth, surround mode and volume.

The modest socket selection on the back acts as confirmation that the SB200 isn’t really intended as an audio hub like some soundbars – it’s basically just an extension of your TV’s speakers. For example, there are no HDMI inputs or even stereo RCA inputs – all you get are a 3.5mm minijack and optical digital input. That allows you to connect your TV’s analogue stereo outputs to the 3.5mm input (using the supplied adapter cable), while another device like a Blu-ray/DVD player or digital TV receiver can be hooked up to the optical in. Some might be put off by these limited connections, but others will appreciate its singularity of purpose.

Built-in Bluetooth is the SB200’s killer feature, allowing you to stream music wirelessly to the unit from phones or other music devices. It’s easy and convenient, unlike network-based streaming systems that make you faff around with routers, Wi-Fi passwords and so on.

The SB200 also features Dolby Digital decoding and Harman’s Display Surround technology, which creates a virtual surround soundfield from its stereo speakers. There’s also a Bass Boost mode to enhance low frequencies and a choice of EQ modes for tabletop and wall mounting, selected using a switch on the back of the unit.

The SB200 features two 89mm woofers and two 25mm tweeters. Those woofers, along with a precision bass port, are supposed to generate enough deep bass to give sound depth and punch without the need for a separate subwoofer.