A portable rave machine? Or maybe a 21st-century lava lamp? JBL’s latest version of its party speaker certainly attracts the eye with its fancy LED display. It also produces an improved, room-filling 360 degree sound that belies its pint-glass size. Nevertheless, all that flash adds to the cost of a device that lacks the basic smart features of similar-sized speakers at this price, while it also jettisons a couple of handy features that its predecessor boasted

What is the JBL Pulse 4?

With their brash, often maxed-out bass output, and garish light features, party speakers are quite literally a booming sector of the audio market and JBL are leading the charge. It makes several lines that fall into the bracket, with its Pulse range of portable devices one of its most popular.

The company has been making Pulse speakers since 2014. Smaller, and a fair bit less obnoxious than your average party speaker, the range’s unique selling point comes in the form of their eye-catching LED lighting effects which are built into the chassis.

The design has been refined over the years. It began with an almost grid-like array of lights in the original model, to 2017’s Pulse 3, which featured a more lamp-like light show that ran just over halfway down the body of the tubular device, with a speaker grille and its controls wrapped around the bottom half.

A slightly shorter unit, standing at 8.2in tall and available in black or white housing, the Pulse 4 goes all in on the light show feature this time. Its LED array runs the entire length of the speaker, making for a far more sophisticated look. 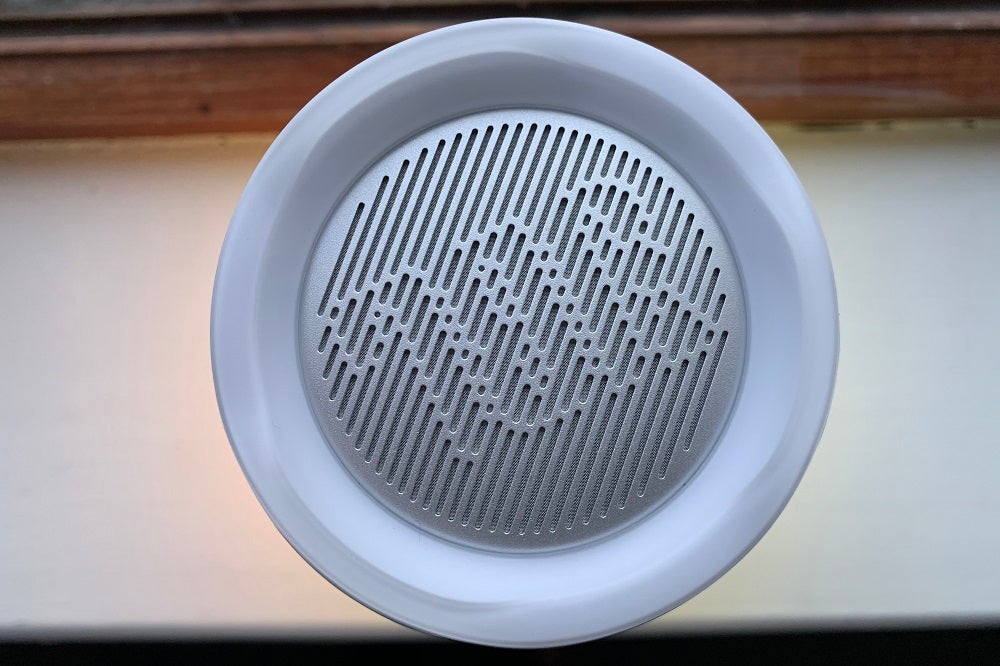 While the wrap-around speaker cloth grille has gone, the excellent, room-filling 360 sound of its predecessor is maintained. The device delivers an impressively loud and surprisingly well-balanced output that isn’t overtly dominated by bass – so often the case with devices of this type.

There’s a payoff for that full-length light show, however: the 3.5mm auxiliary-in input and built-in microphone have both been sacrificed. This means you can no longer take calls with the device, nor use the speaker with a non-Bluetooth-capable sound source.

Weighing in at 1.2kg, it’s a fairly hefty device for a speaker of this form factor. The glass-like casing, while prone to fingerprint smudges, has a major advantage over many of its rivals: it has a fairly comprehensive IPX7 waterproof rating. 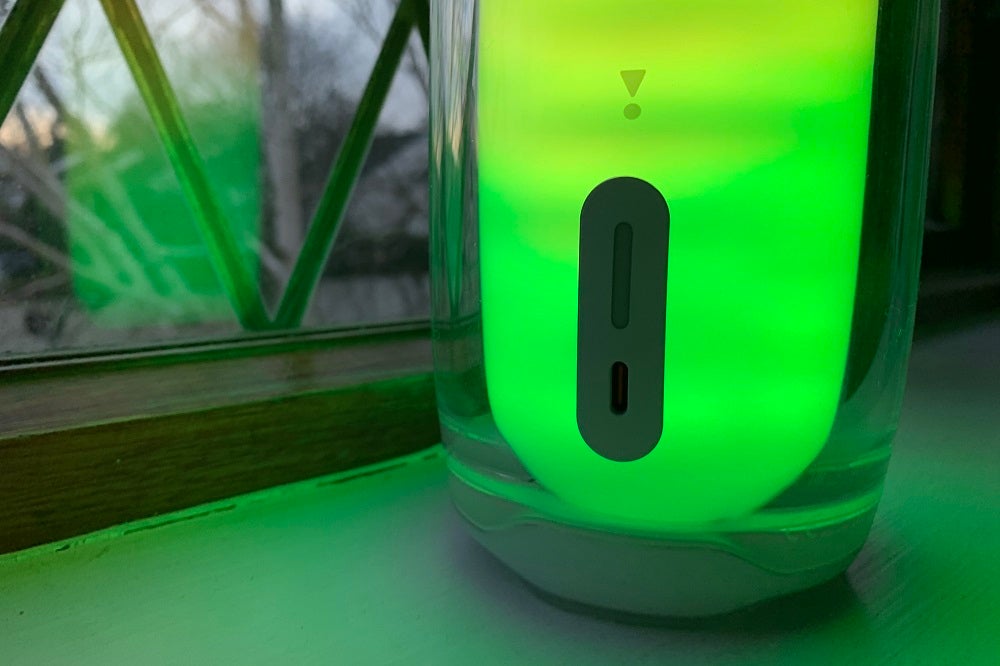 USB input on the Pulse 4

This means the unit can be submerged in up to 1m of water for up to half an hour without causing damage. It’s also dust- and sand-proof, making it perfect for pool or beach parties, or bathroom sing-along sessions.

Those claimed waterproof credentials certainly held up in our testing. However, it’s worth mentioning that playback was something of a garbled mess for a good 20 or so minutes following its dunking – despite the device having been wiped dry of surface moisture – as water worked its way out of the speaker grille.

While some devices of this type have plastic flap covers on inputs, the single USB 3 socket on the Pulse 4 – used solely for charging – is completely exposed. While the socket itself has been given some waterproof treatment, we’d advise adopting some caution following an unexpected dip, ensuring that the port is fully dry before plugging the device into the mains.

Along the brim of the speaker you’ll find an array of physical controls for controlling volume, playback, lighting, pairing, and syncing with other wireless JBL speakers via the brand’s bespoke “Party Boost” feature. This allows you to create a stereo pair, or a quasi multi-room multiple speaker array with up to 100 compatible speakers bunched together at once – something we weren’t unfortunately able to test in this review. 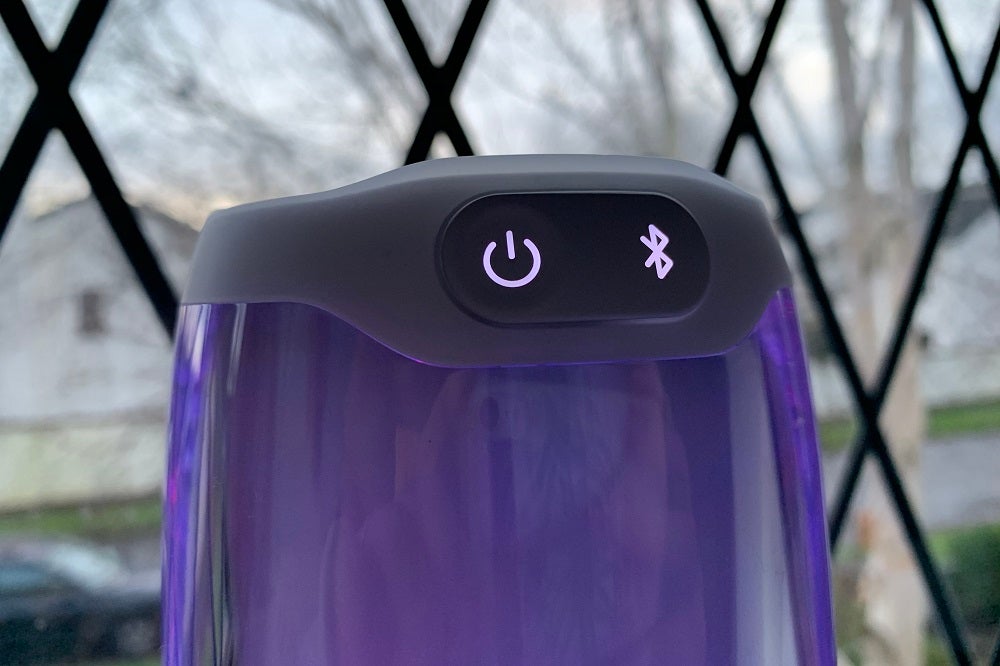 Connectivity is via Bluetooth 4.2, and while we’d have liked support for the more efficient 5.0 variant and the ability to connect to one device at a time, the device does at least boast an impressive wireless range of 80ft.

The light show modes can be accessed via the aforementioned button on the top of the speaker, but there’s far more control over the effect via JBL’s well-designed iOS and Android companion apps. 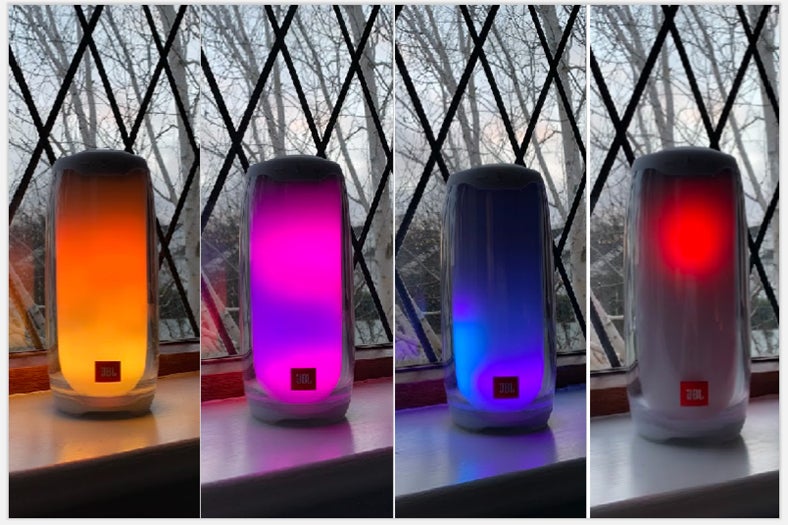 While previous Pulse models had 10 different available modes, the light show profiles have been refined down to four on this latest edition. However, those on offer are now far more effective animations and are much more complementary to what sounds are playing.

Alongside a mellow, slow pulsing “Spiritual” setting that seems geared toward yoga and meditation sessions, there’s also an aquatic-themed “Wave” mode, a campfire preset that mimics flames, plus an “Equaliser” setting that apes the graphic audio-analyser displays found on old hi-fi systems.

As well as providing a visual cue for volume and battery levels, the light show can also be personalised through the app, with colour schemes available from a wide pallet. Even more handy is an impressively accurate colour-match feature. This makes use of your phone’s camera, enabling you to choose a colour from a picture, so you can potentially match the light to your room decor. 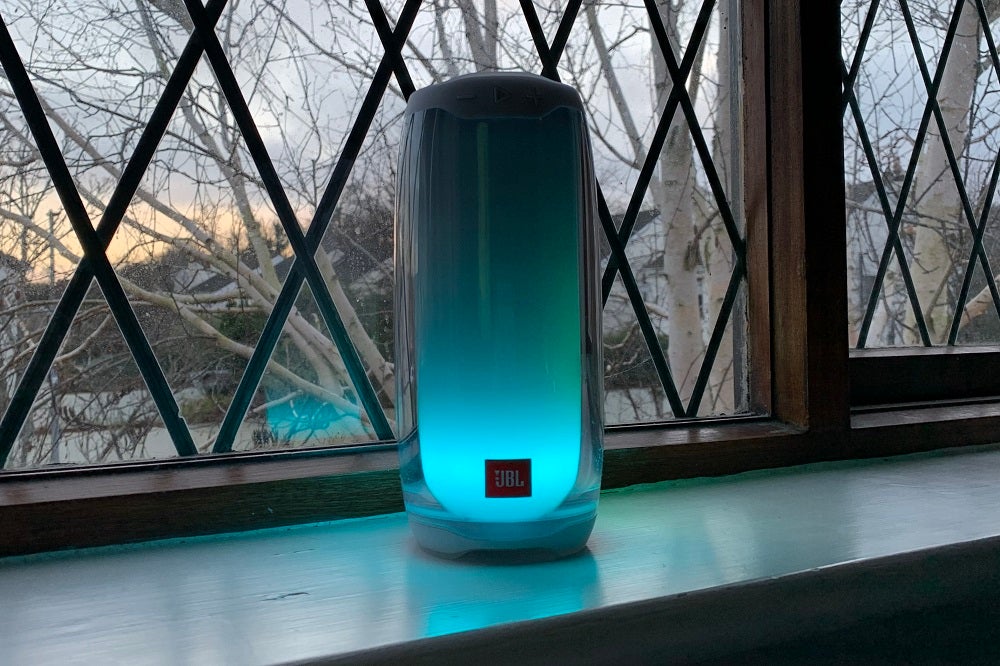 While it would be easy to dismiss the Pulse’s light feature as a gimmick, in practice it provided a far more pleasant effect than we were expecting.

Similar to the way Philips’ Ambilight system subtly augments TV pictures, when in Wave and Spiritual mode, the Pulse 4’s lights genuinely add a soothing ambience to a room when softer tracks were played. The bouncy Equaliser animations complemented lively songs well, too. The Pulse 4 is clearly aimed at a youthful demographic, but the feature could easily find the device an audience beyond the one intended.

While the app allows plenty of customisation of the device’s visual features, we’d like to see a future update that allows for some tweaking of its audio output – there’s are no EQ controls accessible at this point.

That’s not to say that the Pulse 4 isn’t well tuned – it is. The combination of its passive bass radiator on the bottom with the driver mounted at the top propels a warm, mid-focused sound in all directions. Its bass output belies its proportions, but never feels overpowering.

Only when the volume is cranked beyond the 90% mark does any sort of harshness come into play. Nevertheless, it’s minimal, showing impressive restraint for a speaker of this size. At 20W of output it’s capable of doing a job even in larger rooms, but what’s perhaps most pleasing is the real sense of separation that it delivers. 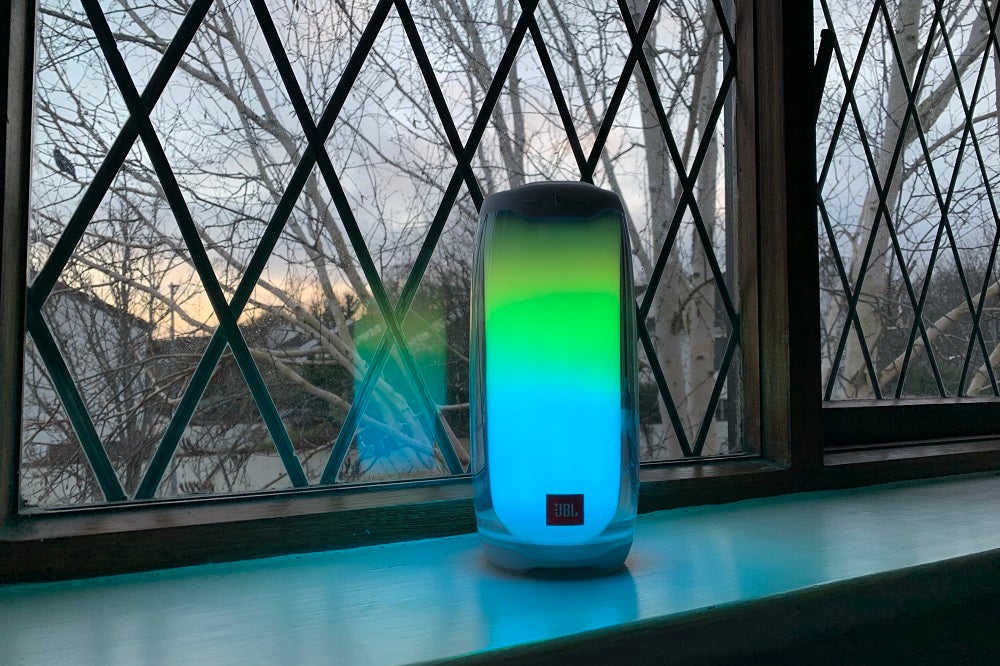 Putting the device through its paces with MGMT’s often hard-panning In The Afternoon really showcases the evenly distributed 360 sound, with each element of the track easily distinguished.

JBL claims 12 hours of battery from a full charge, with the lights running off a full 3.5-hour charge. While this figure somewhat undersells its capacity (in our testing, we were able to get almost a further two hours with the volume up around the 75% mark), it remains a relatively low overall battery life for a speaker of this size and output.

Should you buy the JBL Pulse 4?

While JBL will likely claim that a youth-orientated speaker such as this doesn’t call for voice-assistant compatibility, it nevertheless seems a pity that you can’t at least piggyback to services such as Alexa due to the omission of a built-in microphone. This is the biggest disappointment of the Pulse 4, particularly at this price. With its better than expected sound quality, it would have rounded off an otherwise excellent device.

The Pulse 4’s light show needs to be seen to be fully appreciated – and while it adds to the price and won’t be for everyone, it’s a unique feature that provides more than just a talking point for a speaker that punches well above its weight.

By Kevin Lynch
Kevin Lynch is a London-born, Dublin-based writer and journalist. The author of Steve Jobs: A Biographic Portrait, Kevin is a regular feature writer for a number of tech sites and the former Technolog…