Some people misunderstand what the “Apple revolution” of product design is all about. Some accuse it of being all about style over substance, of convenience over performance. But really, it’s a marriage of convenience and performance, within carefully-countrolled boundaries. To be at one with any Apple device, an accessory like the JBL OnBeat dock needs to reach this same point of balance between ease of use and capability. Let’s find out if this dock does.

The JBL OnBeat is a small dock, but it can accommodate iPads as well as iPods and iPhones. With Apple’s tablet attached, the footprint of the dock isn’t that much wider than the iPad itself, but at £150 it needs to perform against some very serious competition. At this price you can nab the Klipsch iGroove or the Philips Fidelio DS7550 instead. 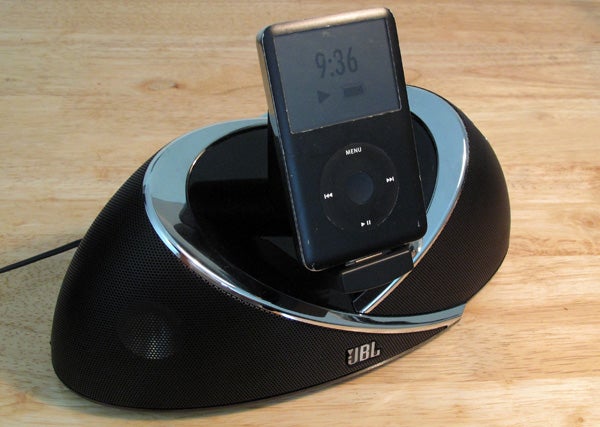 Its closest rival, design-wise, though is the Altec Lansing Octiv 450, one of the first iPad-compatible docks to arrive on the scene back in 2010. The JBL OnBeat is more stylish though, with two silver plastic swooshes cutting through the middle of the dock to give it a very definite sense of design. Although using metal instead of plastic here would have added some class here, build quality is very solid throughout.

The coated metal speaker grille extends seamlessly all the way around the back of the dock, further increasing the cohesion of this little dock’s look. The only slightly unattractive bit of the device is the iOS device holder, which sticks out of the centre unceremoniously. It offers a neat feature or two though. It swivels around, letting you use your iPhone or iPod Touch in landscape mode – useful for some alarm clock-style apps. JBL offers its own dedicated OnBeat iOS app too, which offers a music player and alarm clock.  It’s a free download. To attach an iPad, you’ll need to attach an extra stabilising dock arm, included in the package. This holds onto the bottom edges of the tablet, to make sure it doesn’t end up in a head of broken glass on the floor should you give it a knock.

Although this is a fairly simple dock – it doesn’t offer a DAB radio, Airplay or any other kind of wireless connectivity – it does have a few features around the back missing from some rivals. There’s a USB slot to let you sync up your iOS device, when plugged into a computer, a composite video output and a 3.5mm auxiliary jack input to connect another source. 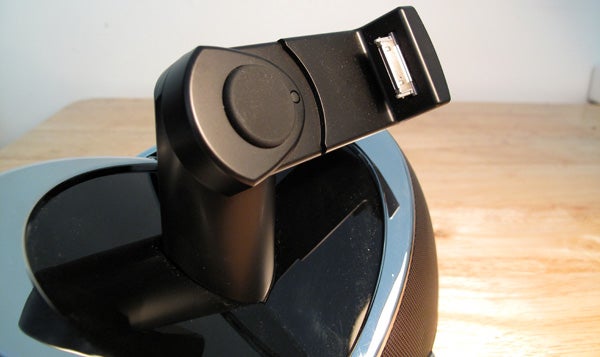 There are just two controls on the OnBeat dock itself, two volume buttons that sit on the right edge. The rest of playback and navigational commands are delivered using the tiny bundled remote, which also lets you sift through your iPod’s library.

The JBL OnBeat dock’s output is created by two little transducers, each powered by 7.5W of power. These are full range drivers, so unlike larger docks there’s no separation between the speakers that supply bass and high-end detail. The two little silver cones hanging out behind the front grille have to do all the work. 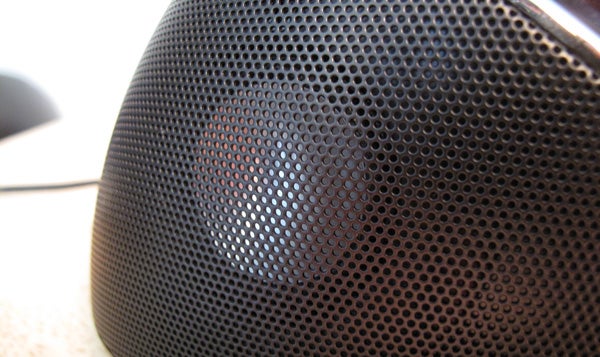 As long as you keep the volume at a fairly low level, they perform extremely well, supplying plenty of detail and an unusually punchy, exciting sound. However, once you push the dock up to the levels needed to fill large rooms, the limitations of a small device like this become apparent. It can’t produce enough bass at higher volumes to match rest of the sound, giving the OnBeat an incomplete, slightly strained sound.

This is symptomatic of the dock’s design as well as the teensy drivers. Separates speakers and larger docks tend to factor-in a significant internal cavity and bass outlet for their woofers, but there’s no outlet here – and precious little room for much space inside at any rate. 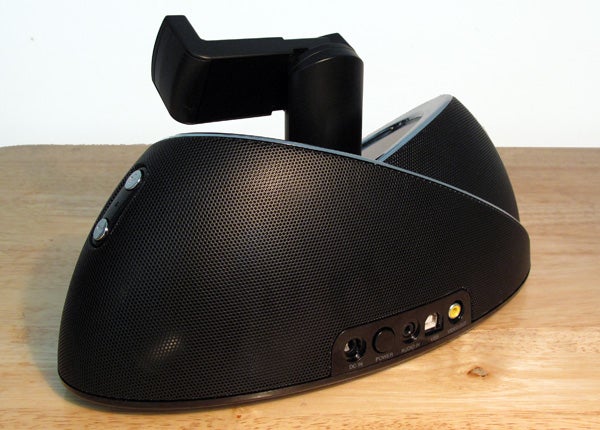 If you want to use the JBL OnBeat as a kitchen or bedroom unit, for relaxed listening, it produces the refined sound we’d expect from a weighty speaker name like JBL. If you want a dock to fill the floor at parties though, you’d be much better off spending your £150 on something more substantial, like the Philips DS8500 or the Roth Charlie wireless system, which is now available for peanuts from some retailers.

Even at lower volumes, if you like your music filled with powerful beats – whether they come from a rock drummer’s footpedal or a prod at a TR-808 drum machine – you may be better off with one of Klipsch’s iGroove models. They use larger drivers and therefore tend to struggle less with lower frequencies. 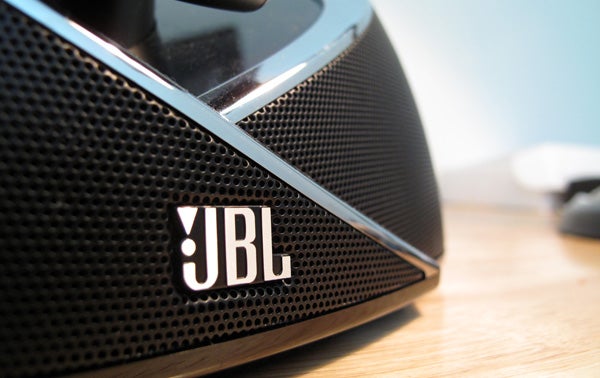 There’s still a lot to admire about the JBL OnBeat though. Its design is bold and well-executed, it’s small and the sound offers good clarity and balance at lower volumes.

Small and well-built, the JBL OnBeat offers quality at a price competitive with its rivals. However, its diddy drivers struggle to dole out enough low end at high volumes, meaning they’re only suitable for relaxed listening, not for powering a party or rocking out in front of a mirror to, hairbrush in hand.