Micro systems and traditional hi-fis started, and continue, with one main design trend. They’re rectangular black boxes. Some are big, some small – some even buck the trend with a white or silver finish – but overwhelmingly they’re box-like. Not so with iPod docks. That most lifestyle-y of MP3 players has injected the audio market with a bit of design aspiration. And so we end up with the JBL On Air Airplay, which looks like a concept model for a Star Trek alien spaceship.

Gleaming with glossy black plastic and edged with a silver speaker grille that covers its sides and top in one clear sweep, this is a bold dock that’s going to turn off some buyers. Turned off already? We understand. 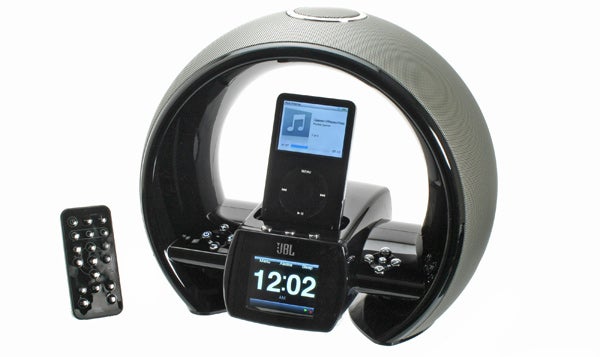 Yes, it looks weird, but a big clicky button on the top brings it back down to earth, like a UFO that’s suddenly run out of power. On top is a snooze button. For all its brash curves and shiny finish, JBL’s latest dock wants nothing more than to sit by your bedside and wake you up in the morning, perhaps to Radio 4 using the built-in FM radio, or a nice, civilized string quartet piece from your iPhone.

If your bedroom is fully Feng Shui’d, with light walls and a breezy bedspread to make the most of the ambient light, this dock will look entirely out of place. It’s striking, perhaps too striking for its own good, but in the right room it’ll look really rather good from afar. 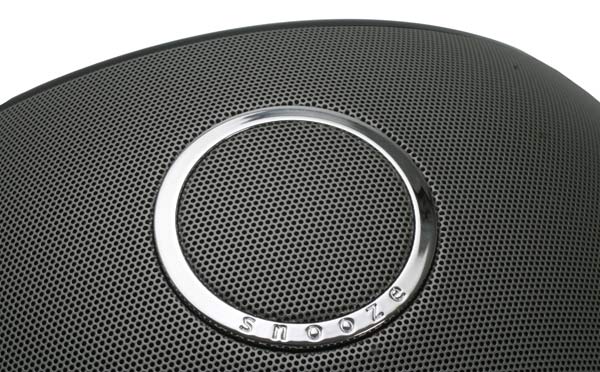 The “lifestyle” aspirations inherent in a device like this start to falter when you get closer up though. If it wants to appear sophisticated – which to us it seems to, desperately –  why arrange the nav buttons just like a game pad’s, and why finish them in bright silver? To pull of the design it sports, the On Air dock really needs to try and make these buttons seem almost invisible when they’re not needed, to lend the dock’s main curve the grace it needs. 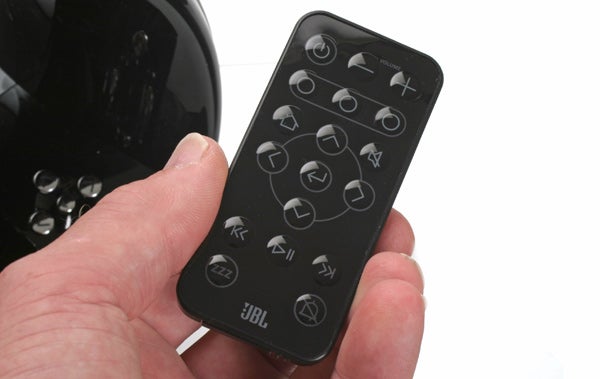 Robbed of the simplicity that could have made the On Air dock look like a high-end system, it’s all-too easy to imagine it propping up a wall in a teenager’s room. That’s not something we should really be saying about an iPod dock that costs £329. That’s the same price as the wonderful Philips DS9000, and more expensive than the B&W Zeppelin Mini. Both look and feel classier than the JBL On Air dock.

We’ll hand it to JBL though, this dock does pack-in lots more features.

Aside from being a standard iPod and iPhone dock, the JBL On Air also has an FM radio, an alarm clock function and a full colour display that shows the details, and any artwork, of tracks playing. Oh, and Airplay – the dock’s main feature of note. At first the display seems a bit pointless – it’s around the same size as the iPod Classic’s screen, and significantly smaller than the iPhone’s. However, the font size used is pretty large, making it easy to read from across a room.

We found that it didn’t always keep up with what was playing when dishing out ditties from a docked iPod though, needing to be disconnected and re-docked. It also uses the thumbnail artwork rather than any high-res assets, looking blurry close-up. 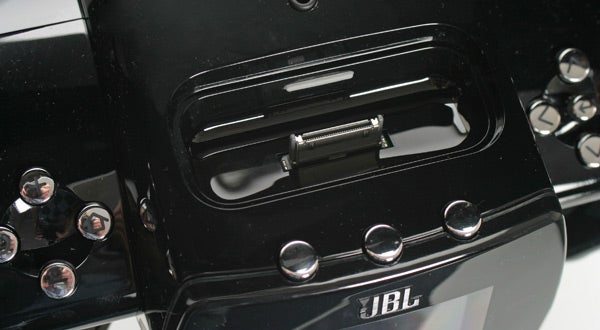 Very odd for a dock like this, there’s also no way to browse through a docked iPod’s library using the on-dock controls or the bundled remote. The nav buttons only take you through the dock’s own menu system. We get that this is a device made with Airplay in mind, which makes on-device library searching dead easy, but there’s still a very conspicuous dock socket at its centre – it’s nowhere near as wireless-centric as something like the Philips DS9800.

Airplay is Apple’s wireless streaming feature, and it predictably works flawlessly – this being Apple and all. You have to setup your Wi-Fi network on the JBL On Air beforehand, but that’s as simple as inputting your security key, if you use one. And if you don’t, you should. When using your iPhone as a virtual remote for the JBL On Air, the lack of nav options and the screen niggles fade away, but then so does the need for an additional screen (when playing music at least). 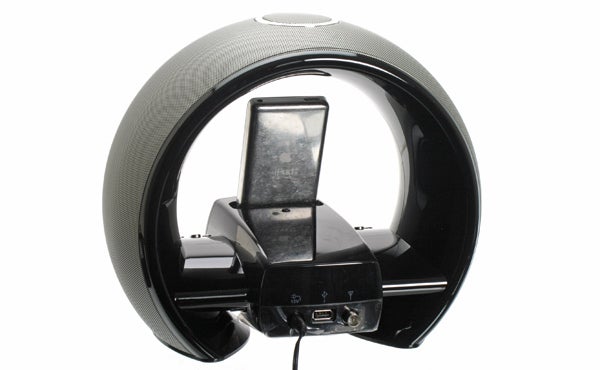 There’s an auxiliary 3.5mm jack input just behind the iPod socket, letting you plug-in another source easily. This wealth of features demands a more involved menu system than you’d find in rivals like the Philips DS9000 or Zeppelin Mini, and it’s mostly traversed through using the three buttons directly above the mini display. The context-sensitive function of each is displayed at the top of the display. Like the snooze function, it helps this dock function well as an alarm clock – what’s the use of an alarm clock if it doesn’t have a clock display after all? So, for all the album art-displaying shenanigans, this is the display’s true primary function.

The JBL On Air has stumbled into a problem. It’s a £329 alarm clock. Yes, it’s a lot more besides, but the relatively bedside-friendly form factor is always going to impact on the sound.

There are three drivers in total – two full range speakers, and one tweeter unit to supply the finest of high-end detail. With the volume kept fairly low, the sound is very good. With a bright sound signature, clarity is excellent and there’s a strong sense of high-end detail being well-relayed. It’s not overly sharp either – just crisp. 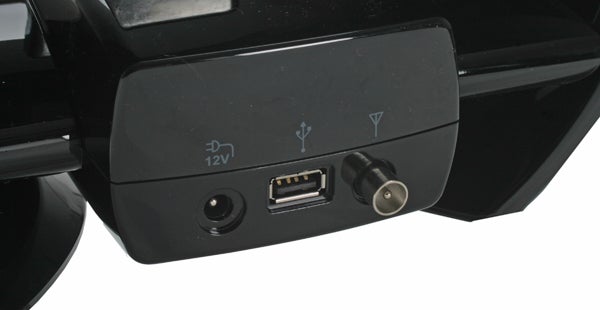 At low and mid-level volumes, the bass keeps up well too. It belies the design – the speakers essentially only have the outer ring of the On Air to work with. Unfortunately, when pushed it doesn’t match what we expect to hear from a £300 dock.

The On Air fails to reproduce the very bottom end of the bass register entirely. This is only hugely noticeable in electronic music, where these ultra-low frequencies are sometimes singled-out – rather than being the bottom bit of a bass guitar rumble – but it’s disappointing when similarly priced rivals don’t fall down in this respect. This is presumably a limitation of the small full range drivers.

We also noticed distortion in the low end when the volume’s pumped up beyond 60 or 70 percent. This isn’t an incredibly loud dock either, so you could get away with reaching this level without risking eviction. Even at 100 percent volume, the JBL On Air can’t blast out the deafening din a full-size dock can at a lesser setting.

The speaker positioning is also questionable. They are placed on the sizes of the dock, facing outwards. This is an increasingly common technique, lending smaller speaker units more of a room-filling sound, but it also means that the sound is never directed at you – only around you. Again, with a cheaper dock this wouldn’t have been such a problem, but we’re entering the territory of “audiophile” docks at this price, and the extreme positioning here makes the On Air dock only suitable for a fairly passive listening. 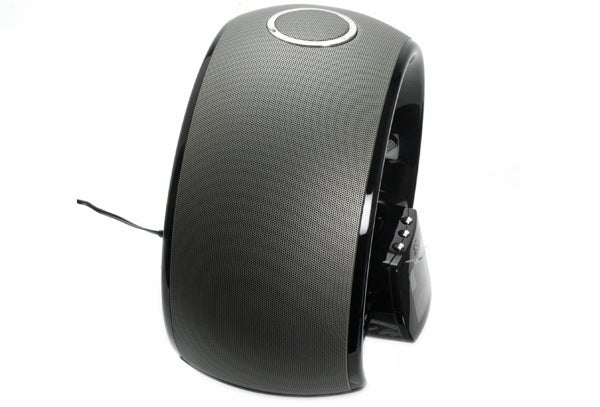 Sit down to actually listen to something intently and the experience is significantly less satisfying than a properly positioned 2-speaker set, or even a more conservatively-arranged dock like the Philips DS9000. Part of the On Air’s price tag naturally goes towards its Airplay functionality, but we can’t face swallowing the sound quality compromise that’s involved – when this device is compared to less technologically-advanced price rivals.

The JBL On Air is a strange mix of conflicting ideas. It wants to be a stylish, lifestyle unit but trips up its own design intentions with some overly-brash controls and a great big snooze button on top. It’s priced like a high-end iPod dock, but dilutes this message with a quasi-alarm clock form that ends up compromising sound quality. When was the last time you thought about spending £329 on an alarm clock?

If the JBL On Air dock was £80-100 less, it’d make a lot of sense. It sounds good at low volumes and packs-in plenty of features, including Airplay, an FM radio and full alarm clock functionality. However, at £329 it directly challenges some of the best iPod docks out there and both its design and sound don’t stand up too well in comparison.