The JBL Flip 4 is a small Bluetooth speaker with excellent water resistance and a frame willing to put up with plenty of abuse. It’s a compelling alternative to the UE Wonderboom.

Its official price is £119, but at the time of writing you can find it for £99 online, and that £20 makes a big difference in the crowded world of wireless speakers. You get better, deeper bass than the Wonderboom here, but a lack of smoothness and refinement in the mids means it’s a good rather than truly great little speaker. 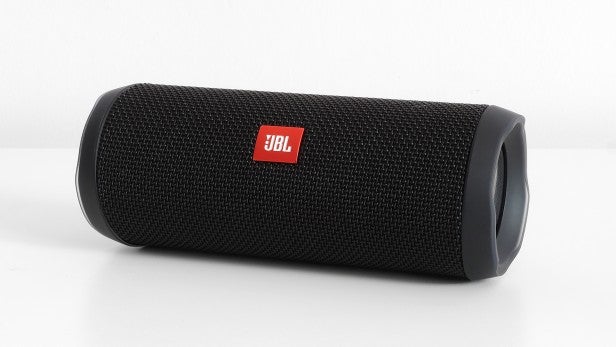 The JBL Flip 4 is a very similar shape to the UE Boom 2, just slightly smaller. It’s like a tiny thermos flask. However, where the Boom is primarily designed to be used standing up, the Flip 4 is meant to sit on its side. A rubber control panel on the back stops the little guy from rolling over, and pitches the front drivers slightly upwards to get better sound dispersal.

Sticking the JBL Flip 4 upright is always an option, though. On each end there’s a passive radiator, which is the tiny Bluetooth speaker equivalent of a subwoofer. JBL lets the air these drivers pump out escape using subtle cut-outs in the rubbery end-pieces. 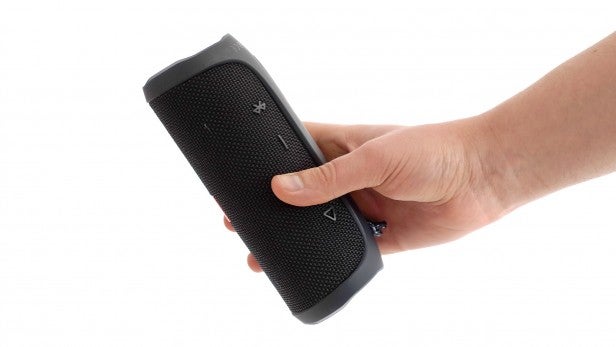 This is a great design for a portable speaker. It’s small and contoured enough to carry around in one hand, a much more rugged take on the kind of speaker you get with the Jam Heavy Metal or Bose SoundLink Mini II. There’s no metal on show, but rubber armour that sticks out from the speaker grille will take a beating much more happily than aluminium.

It wouldn’t mean much without the JBL Flip 4’s water resistance, though. The fabric weave that covers all the active drivers and the heavy-duty rubber bung over the Micro USB charge socket and 3.5mm aux input provide IPX7 water-repelling. This means you can submerge the speaker in water to a depth of 1m. 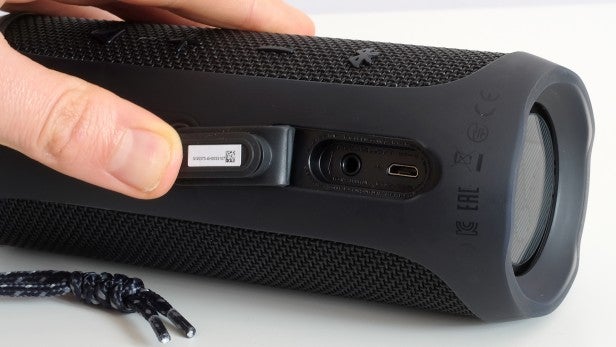 It’ll handle being used in the bathroom, and one of JBL’s own photos shows it submerged in a swimming pool. I’d suggest keeping it poolside if you take the Flip 4 on holiday, but it’s ready for use just about anywhere.

I’ve been carrying it around using the ‘shoe lace’ that’s attached to one end of the Flip 4. It’s perfect for hanging the speaker up, and you can take it off if it starts getting in the way. 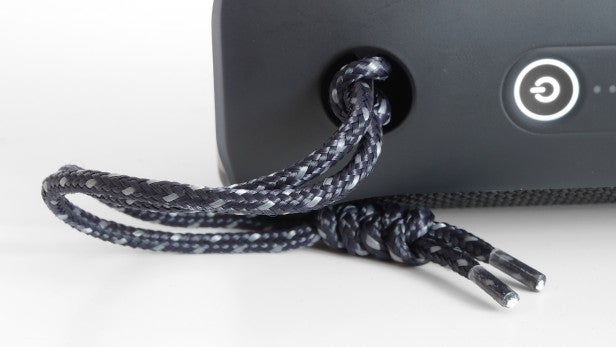 Unlike the UE Boom 2, though, the Flip 4 isn’t really a 360-degree speaker. Its treble output comes from either side of the little JBL logo on the front, not from both sides of the column. The look is much closer to the UE style than how it works.

The main controls are little rubber buttons popped on top of the fabric grille. There’s a Bluetooth button, volume pads and a play/pause button. Using the JBL Connect app you can make the play button summon the Google assistant instead, when used with an Android phone. A mic in integrated so you can talk directly to the Flip 4, and take calls with it. 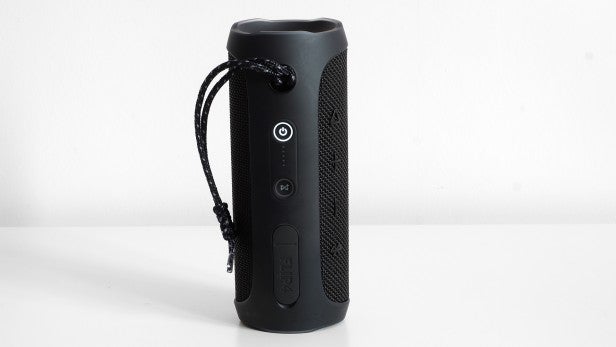 Further around the column there’s also a power button with a very useful little LED battery indicator and a JBL Connect button. I imagine this will be the least-used of the lot, but it lets you connect up multiple JBL speakers, either as a stereo pair or in ‘party mode’, which just makes as many speakers as you like play the same tune.

The battery lasts for up to 12 hours, which beats the Bose SoundLink Mini II and Jam Heavy Metal.

There are real strengths and weaknesses to the JBL Flip 4 sound. It has plenty of power, but lacks subtlety and refinement.

For a fairly small speaker, bass is great. It roughly matches the Jam Heavy Metal in terms of bass depth and power, outdoing the UE Wonderboom by a significant margin. This isn’t about a bassier tonal balance, but having the bass grunt to make kick drums sound chunky and fat rather than like someone tapping on a drum skin. 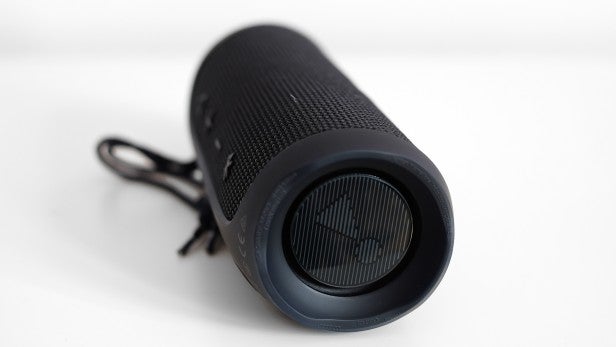 The JBL Flip 4 is a better party speaker than the Wonderboom, unless your idea of a party is listening to some Nick Drake as your guests nibble cheese and crackers. It’s a fun speaker with plenty of volume available.

I’m also relieved to see the two radiators are linked despite being on either end of the speaker. Push one and the other moves out. This means one keeps the other in check, avoiding the parping distortion that can occur when a passive radiator is worked too hard.

However, the Flip 4 is not as refined as the best, particularly among speakers £100-150. The upper mids are a little harder and cruder than some, sounding less smooth than those of the Jam Heavy Metal or UE Wonderboom.

It leaves vocals sounding at times a little abrasive at times, and gives them a more basic ‘non hifi’ tone than a speaker with better mids.

There is a potential benefit to these untamed mids, though, when you take the JBL Flip 4 outdoors. Speakers with very nicely smoothed-out and thoughtful mids, like the Riva S, can start to sound a little lost in the great outdoors. The Flip 4 will cut through better than most. This is a very useful speaker, but not a particularly musical one: a trend I’ve seen in several JBL speakers. 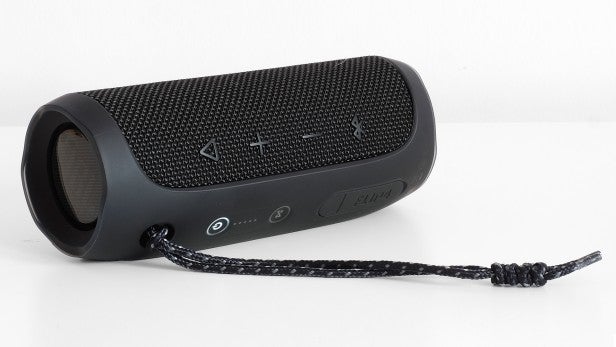 Should I buy the JBL Flip 4?

If hardcore water resistance and a tough exterior are just nice bonuses you won’t use a lot of the time, don’t buy the JBL Flip 4. The Jam Heavy Metal is cheaper and sounds better, with the mid-range refinement the Flip lacks.

If practicality is as important as sound quality, the JBL Flip 4 becomes much more compelling. Its water resistance is great, the thick rubber is hardy, battery life is good and a built-in strap is handy.

If you’re wondering why you wouldn’t just buy a UE Boom 2 or UE Wonderboom instead, the key difference is bass. While UE’s speakers are more refined, the Flip 4 has greater bass depth for more of that “portable party” vibe.

The JBL Flip 4 isn’t the most refined speaker, but it is punchy and super-versatile