JBL's Club One are well-built, look great and sound very good too, and offer a number of ways to customise your experience. They just fall short of top status due to tough competition, and a noise-cancelling performance that's on the lighter side.

The Club One is JBL’s answer to Bose, Sennheiser and Sony over-ears, packing wireless ANC performance at a premium price.

The JBL CLUB ONE (all capitals), is the audio brand’s attempt to gatecrash the premium noise-cancelling party that’s currently being enjoyed by the likes of Bose and Sony.

It’s a task that’s no easy feat, but JBL appears confident it has what it takes to make a splash. The overall performance of the Club One headphones indicates its confidence is not misplaced, either.

JBL CLUB ONE price and availability

JBL CLUB ONE design — Big, comfortable to wear and features some nice touches

Quite like their all-caps model name, the JBL Club One are big for a pair of wireless over-ears. But they wear their heft well and the design has a slight retro feel to it.

At 378g they’re not as light as the Bose NC 700 Headphones (250g), and they’re 70g heavier than even the PX7. I’ve not had many issues in terms of comfort – the amount of padding on both the earpads and the plush leather headband makes sure of that – but if you wear glasses along with a face-mask, I’ve found the pressure can become distracting over long periods. 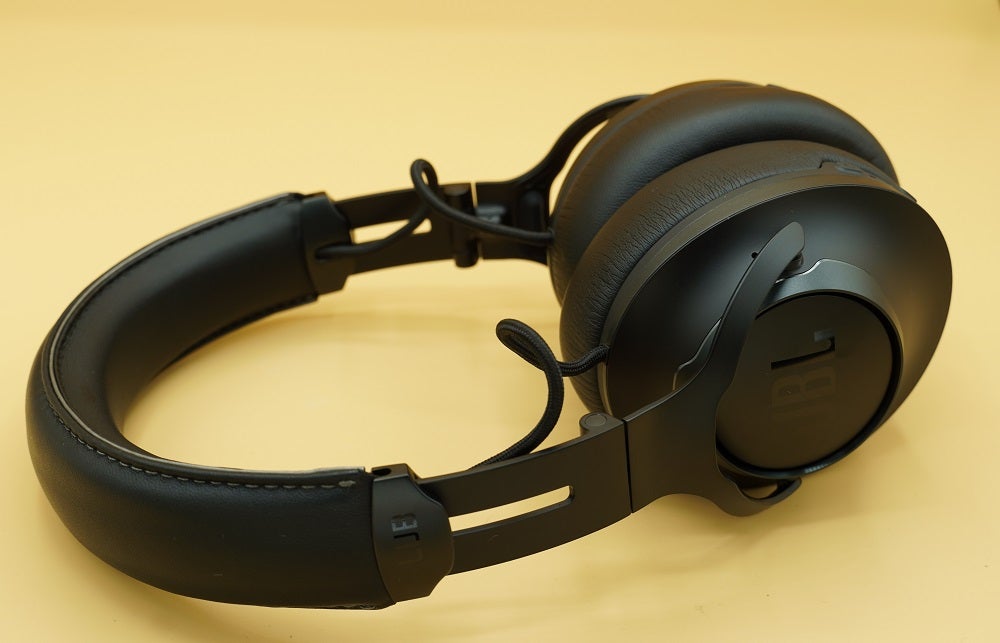 Clamping force is tight, though not to the point where the headphones become unbearable. You’ll certainly notice them, and if you prefer a lighter touch then perhaps these aren’t for you.

Nevertheless, the build is of such quality that they don’t feel as if they will ever break. They do come in a very compact carry case, and I defy anyone to put the headphones back as they originally were and zip it up without encountering a bit of difficulty.

The Club One is gifted with an elegant design, the black finish along with the gentle curves grants them a sleek look despite the size. The silver accents on the ear cups are a nice touch, with the metal hinges emphasising the premium feel while suggesting a level of durability. 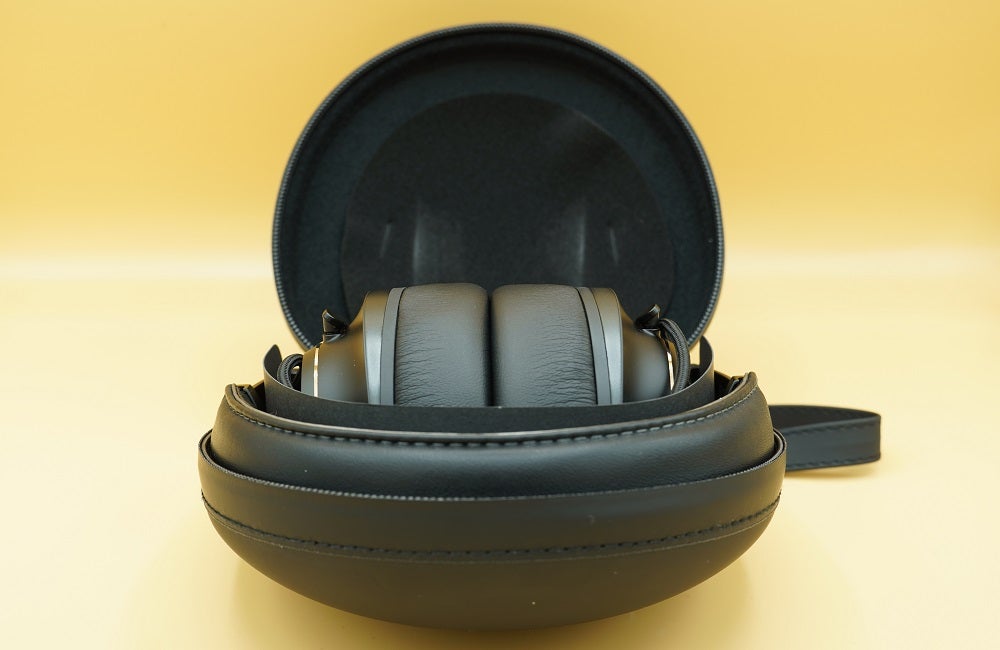 Quite what the wires that connect the headband and ear cups are doing there evades me as the headband already does this. But it looks nice anyway.

Those who aren’t in favour of touch controls will relish the feedback of physical buttons which are divided across the two earcups. On the left are the power, Bluetooth pairing and the Ambient Aware buttons, while on the right there are the playback/volume controls, along with a USB-C connection. 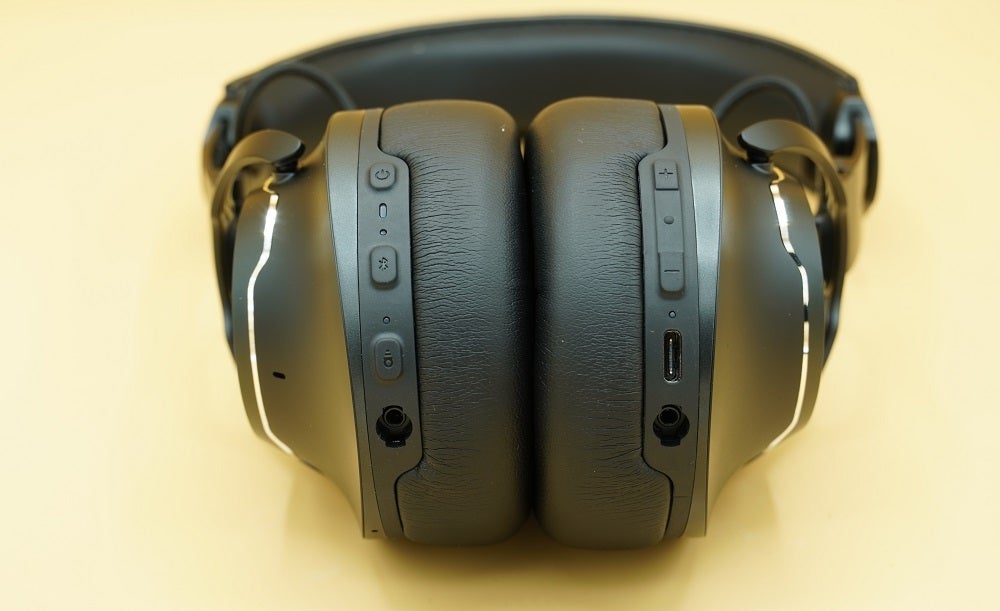 It’s a layout that risks being busy, but the buttons are well spaced out, responsive and where playback is concerned, you can tell which-is-which thanks to raised buttons. There’s also enough space for a dual aux input so you can plug a cable in on either side.

Another rather neat design touch is that the driver housing inside the earpad is covered by a clear piece of plastic, so you can see the custom 40mm orange graphene drivers. Is it needed? No, but does it add to their appeal? I’d say very much so.

If the JBLs are going to take on the best, they need the necessary specs to put themselves in contention. In this case the Club One hits all the respective marks for a pair of headphones a penny under £300.

Voice assistance is a choice of Google Assistant or Amazon Alexa and is activated in a rather neat way. Instead of fumbling for a button, simply nudge the JBL logo on the left earcup and it’ll depress, bringing up the voice assistant of your choice. It’s refreshingly simple as well as a bit off-kilter in terms of interfacing with the headphones. 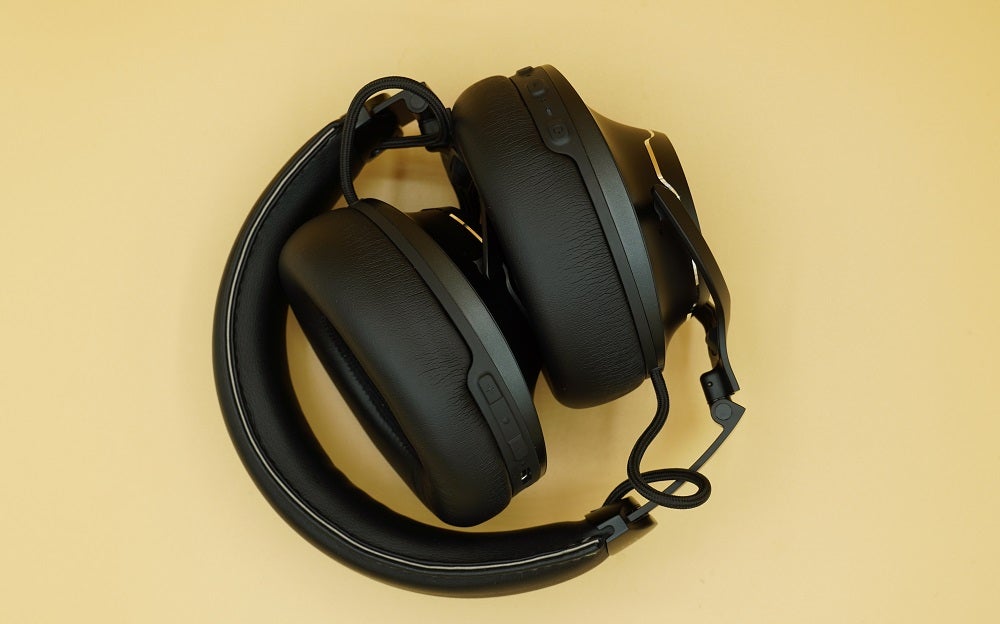 23 hours of battery life is fine (Sony and B&W push it to 30 hours), but it’s enough for commuting and activities on the weekend. Switch ANC off and battery life stretches to 45 hours. Mix passive use (a cable) with ANC, and you’ll get 25 hours of playback. Filling up the tank to full takes less than two hours.

One knock against the Club One is that the noise-cancelling performance isn’t the strongest. JBL says it is adaptive, constantly adjusting to its environment and can take into account whether glasses are being worn, hair and whether a person’s head is moving. I must admit I’ve not noticed a difference.

The JBLs are good at reducing environmental sounds, but not at the type of heavy-duty noise-cancelling that its rivals can offer. Cars and buses are reduced to whooshing sounds, but it’s not the isolating cocoon the Sony or Technics can conjure up. Turning ANC on doesn’t seem to affect the sound, which can’t always be taken for granted.

There’s an app – My JBL Headphones (iOS, Android) – which offers a degree of customisation. It’s simple, visually orientated and easy to use. Jump into the settings and you can assign which voice assistant you want or whether to enable auto-off. Back on the main page are the Smart Ambient and Noise Cancelling options, plus a battery life indicator. 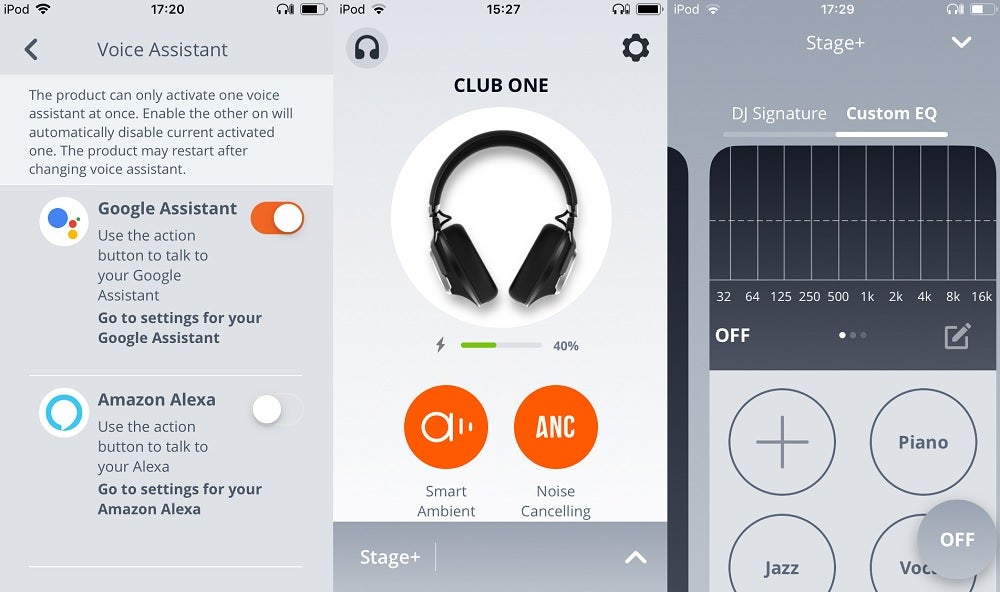 Press the Smart Ambient button and you have two options available: Ambient Aware mode or TalkThru. The former filters more noise through so the listener can take in more of the surroundings. It’s effective enough, but I feel it could be clearer. The latter, TalkThru, reduces the volume of whatever is playing, so the wearer can have a conversation with the headphones on.

At the bottom of the app is a greyed out section called STAGE+, which opens the EQ options. There are five signature sounds of famous DJs from around the world (don’t bother), and there’s the option of customising the lows, mids and highs. The number of presets are few and not wide-ranging (Piano, Jazz, Vocal), but you can make your own EQ mix and if you’re not happy, you can drag it, bin it and start over.

JBL Club One performance — A clean, detailed and precise presentation

What separates middling, good and great headphones is sound quality. The Club One falls into the very-good to almost excellent category.

JBL has made much about its Legendary Pro Sound that’s been inspired by professional musicians, and there’s definitely a quality to the sound that’s revealing, balanced and natural in its approach. 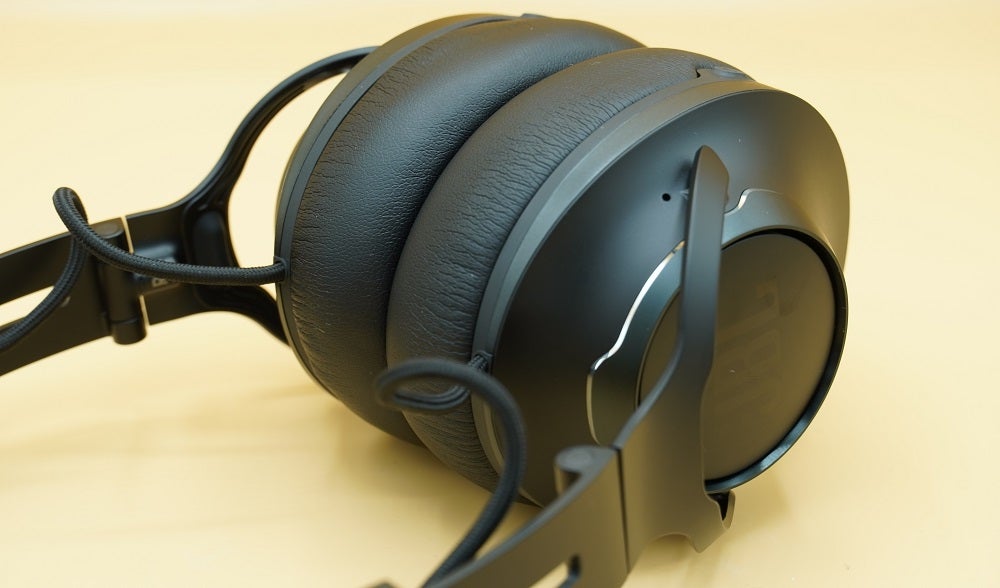 Treble is clear and detailed – perhaps not the sharpest but it stands out and, I feel, is more articulate than the Sony WH-1000XM3. What stands out about the Club One is the clarity. There’s no harshness or shrill tone to their character, nor is there a cramped feel to its sound: it’s a wide and spacious soundstage.

A Tidal Master stream of Alexandre Desplat’s The Shape of Water, and each instrument feels as if it exists in its own pocket of space, tied together with an enjoyable sense of timing.

There’s power behind it – not as much as the Sony – and there’s a clarity to vocals as the Club One presents them further forward so you can hear every word whether it’s shouty lyrics in Korn’s Blind or Justin Timberlake’s tones in Filthy. 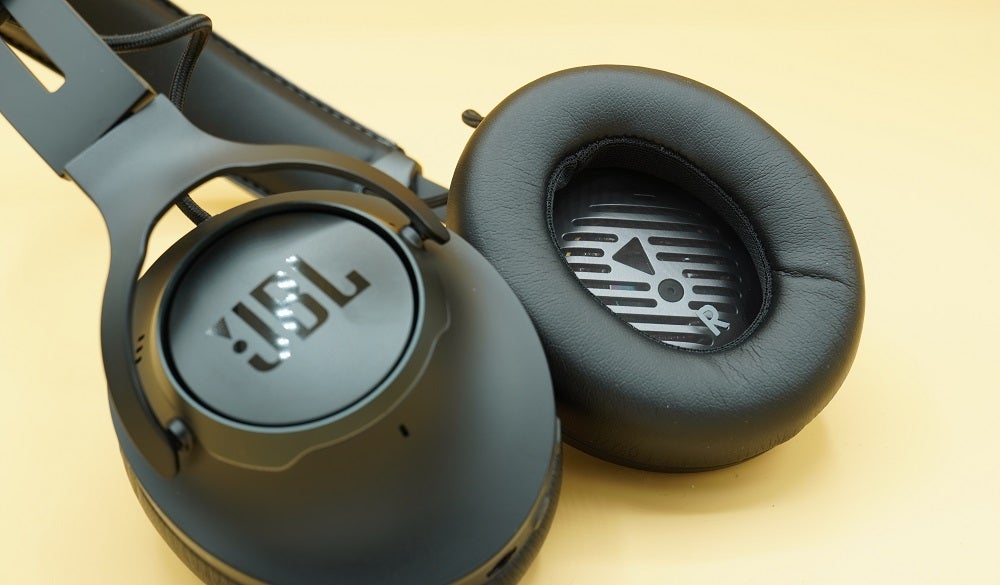 To continue the comparison to the Sony, there’s the impression that they’re more precise and sharper, and although the bass isn’t as explosive, there’s a sense of control in how it’s presented.

But overall the Sony’s sense of energy; it’s smooth textured sound and aggressive bass makes for a much more entertaining listen. The WH-1000XM3’s full-bodied sound, its sense of scale and dynamism (the Club One are a bit too polite in this regard), is greater than the JBL is capable of, especially as the Club One sound thinner than our top-rated ANC wireless headphones.

The JBL Club One sounds very good, verging on excellent, but just falls short of the top tier in what is an extremely tough field. Nevertheless, if a nuanced, detailed audio listen is what you’re after then the performance here is easy on the ears.

You should buy the JBL CLUB ONE if…

This is an extremely competitive field that’s made up of the best brands in the audio market. JBL ought to be considered as one of those contenders with it’s fine, well-detailed and balanced performance.

Though they come in black, they’re a little different from the norm in terms of design. People will certainly notice them.

You shouldn’t buy the JBL CLUB ONE if…

If you want high-quality sound and noise-cancelling, there’s the Sony WH-1000XM4 and Shure AONIC 215 to consider. Though both are more expensive than the JBLs.

The JBLs aren’t exactly what you’d call petite and at 380g you can feel the weight.

The JBL are rather polite when it comes to showcasing dynamics, so it’s not the most invigorating of listens.