What is the JBL Charge 3?

JBL’s Charge 3 is a USB phone charger with a Bluetooth speaker built in. Or perhaps it’s the other way round. Either way it comes with heavy-duty waterproofing, a whopper of a battery that’ll let you siphon off juice if your phone dies, and you can daisy chain similarly branded speakers together to boost the volume.

Those are features you don’t find on every Bluetooth speaker and it’s available at a decent price, so there must be a catch, right? 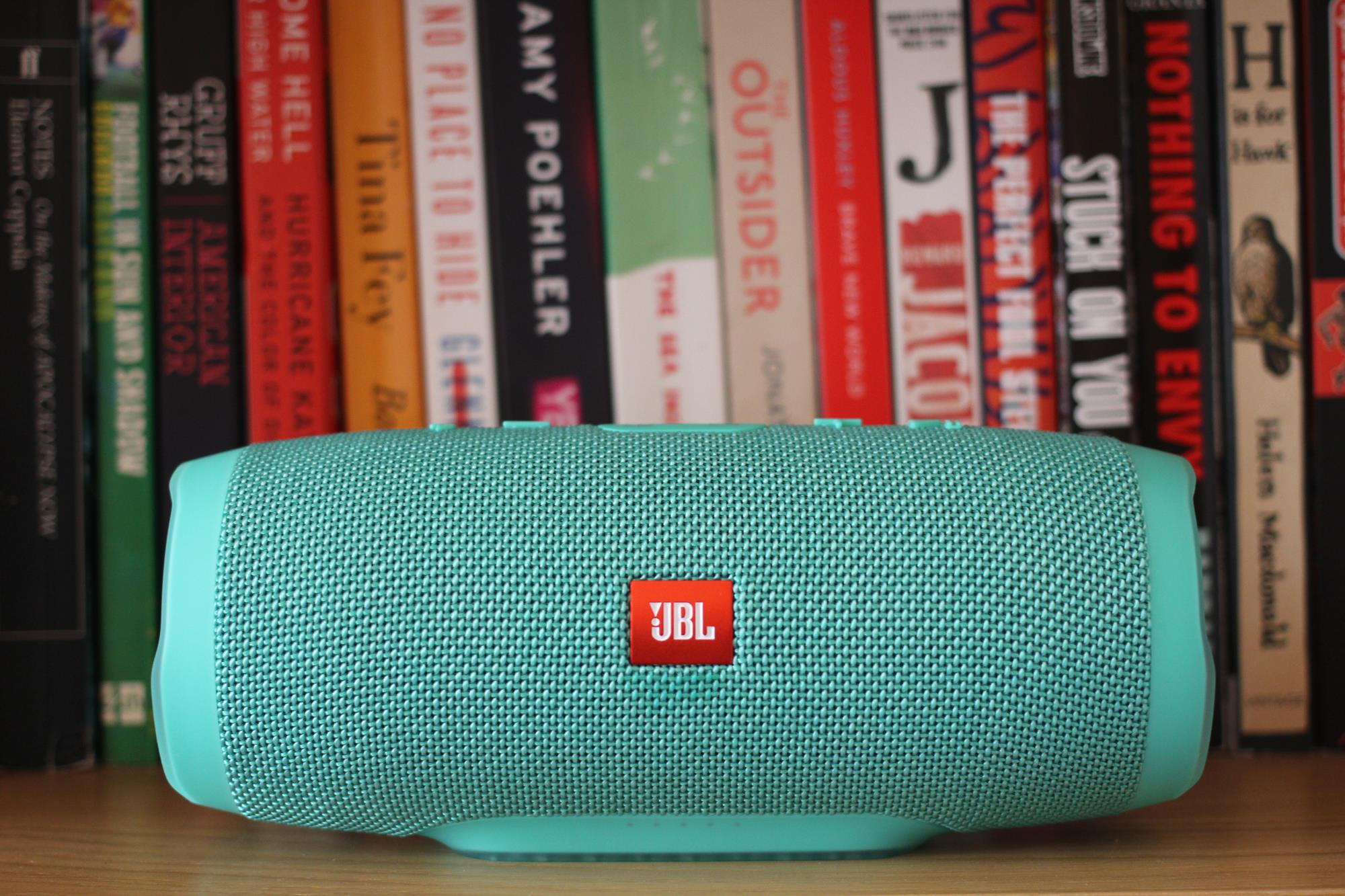 About the size of a Thermos flask and covered in a tightly woven fabric, the Charge 3 is essentially cylindrical but for a flattened platform on the bottom that ensures it sits still. A row of buttons on top offer the usual array of controls: Bluetooth pairing, volume adjustment, and play/pause, which you can press twice in quick succession to skip a track, or hold to summon Siri or Android’s Google Assistant from your phone.

In the middle, next to the power button, you’ll find one that looks like a cross between an hourglass and an infinity symbol. This is used to activate the JBL Connect feature, which allows you to connect other JBL-made products to form a symphony of speakers all playing the same tune from the same phone. 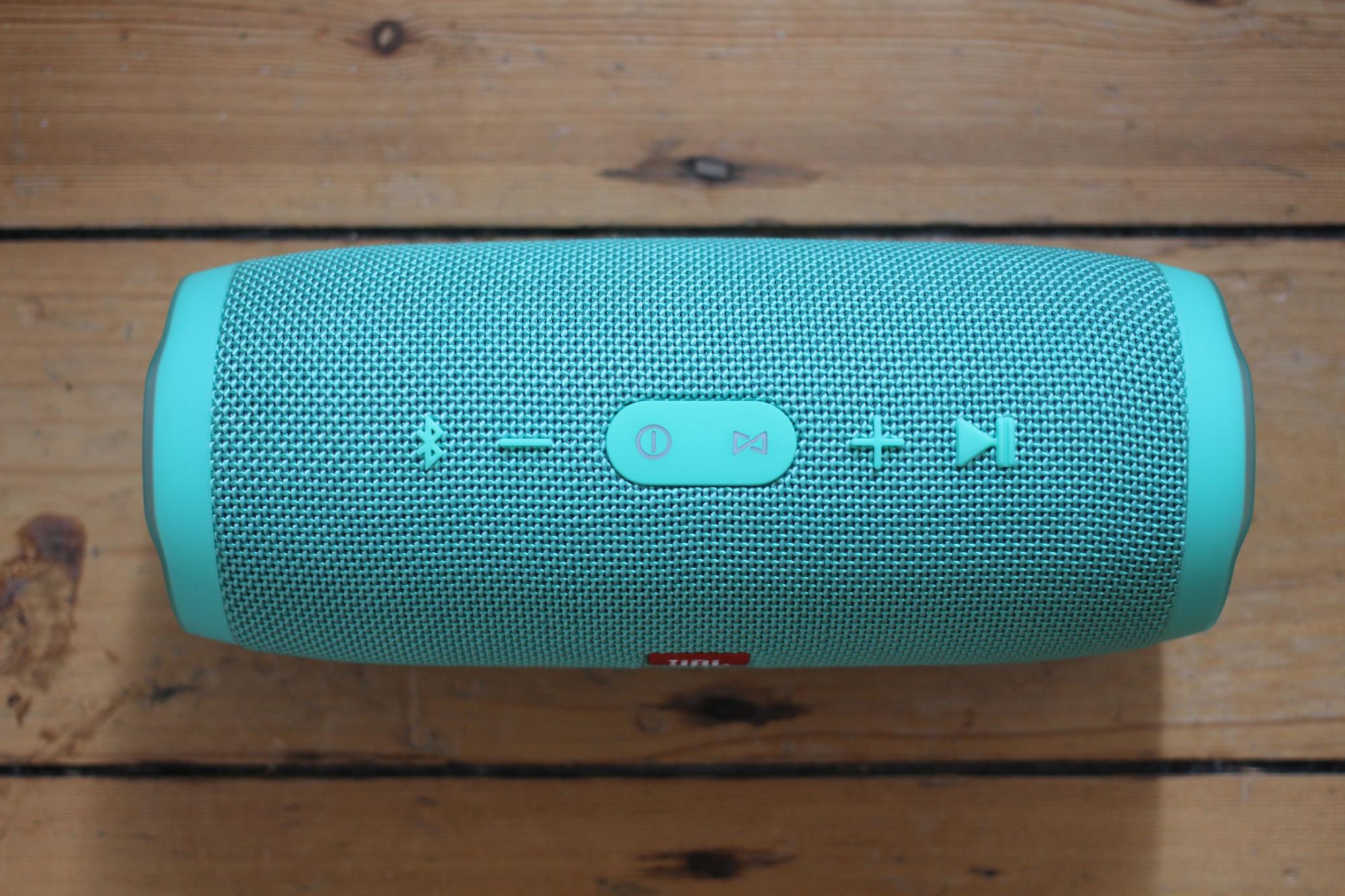 I only had the one, so wasn’t able to test it, but in theory it’s only limited by funds and logistics, so if you can get 500 supported speakers in the same place, you can really test the patience of your neighbours.

Round the back there’s a flap that covers the usual micro USB for charging, a 3.5mm input for anyone still clinging to their old iPod Classic, and one other socket you don’t usually see on portable Bluetooth speakers: a full-size USB port.

The Charge 3’s whopper of a battery (6000mAh, twice the size of the one in the Samsung Galaxy S8) can be used to juice your phone. It’s not exactly a substitute for a pocket-sized charger but it’s certainly handy to have the option. Of course, that’ll eat into its battery life, but with about 20 hours at your disposal you can probably afford to lose a bit. Having rewatched Inception recently, I used it to charge another Bluetooth speaker. A five-light indicator on the plinth shows how much is left, and, when you’ve got it plugged into the mains, how long to go until it’s fully charged. 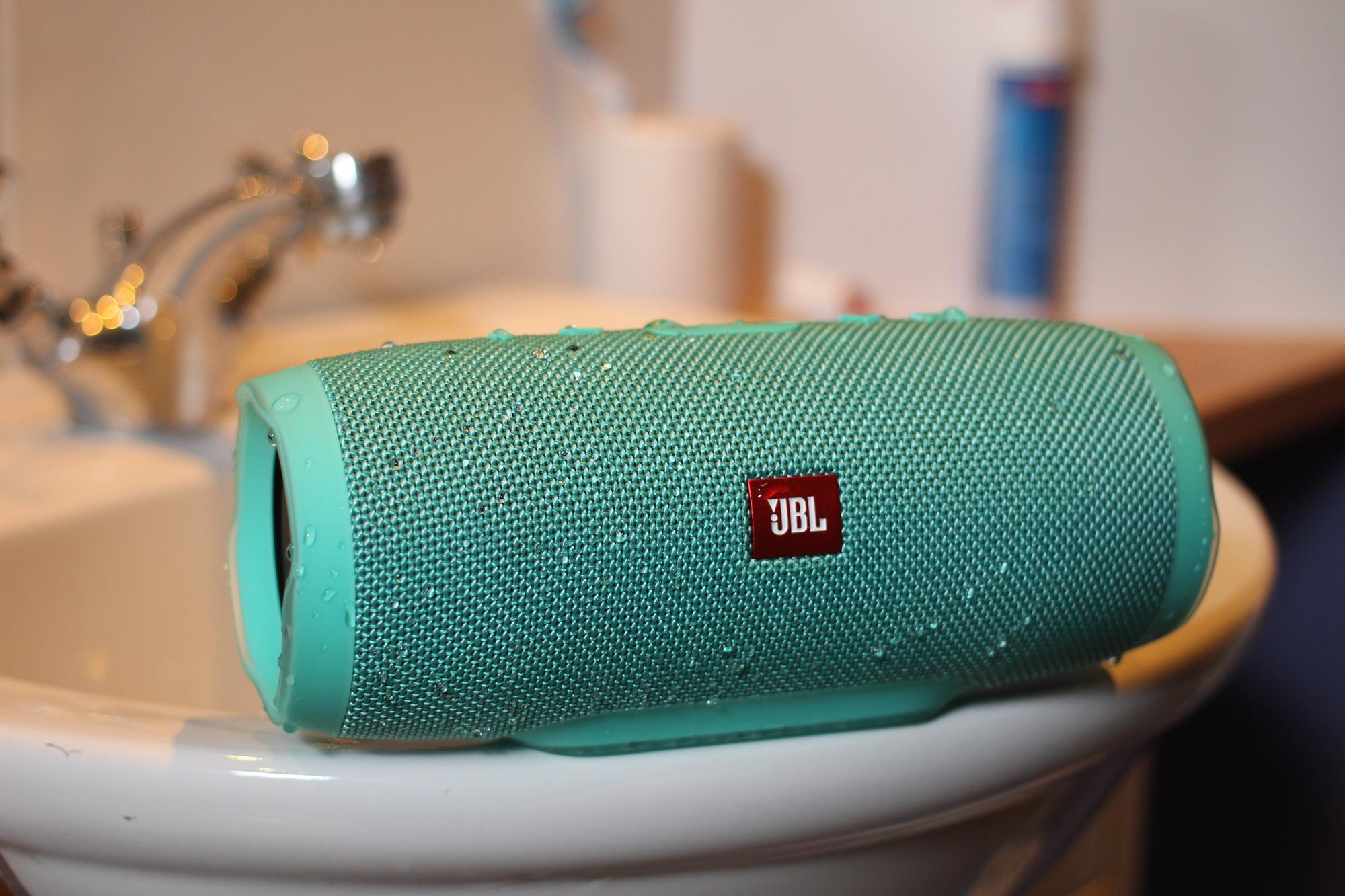 Exposed bass ports at either end will make you doubt its waterproofing, but I took it into the shower alongside my bottle of Wash ‘n’ Go and the water bounced off it like a duck in a kagoule. If you’re more a hot-tub kind of person it can put up with 1m of water for up to 30 minutes. Just make sure that flap round the back is closed properly

My review sample came in a fetching mint green colour, reminiscent of mint choc chip ice cream but nowhere near as tasty. Any of the black, blue or red versions are nicer and the grey one’s only worth considering if you like boring things.

Despite being almost entirely cylindrical, the sound that comes from the Charge 3 is quite one-directional. That doesn’t mean it sounds like Harry Styles and co, but rather that you won’t get the full effect of its 20W of power unless you’re right in front of it.

It’s an impressive performer. It’s physically a little more bulbous than something like the UE Boom 2, but that’s what allows it to sound so solid and no-nonsense. The sound is well rounded with good balance, if sometimes a little lacking in excitement, so you have to turn it up to get the best out of it. 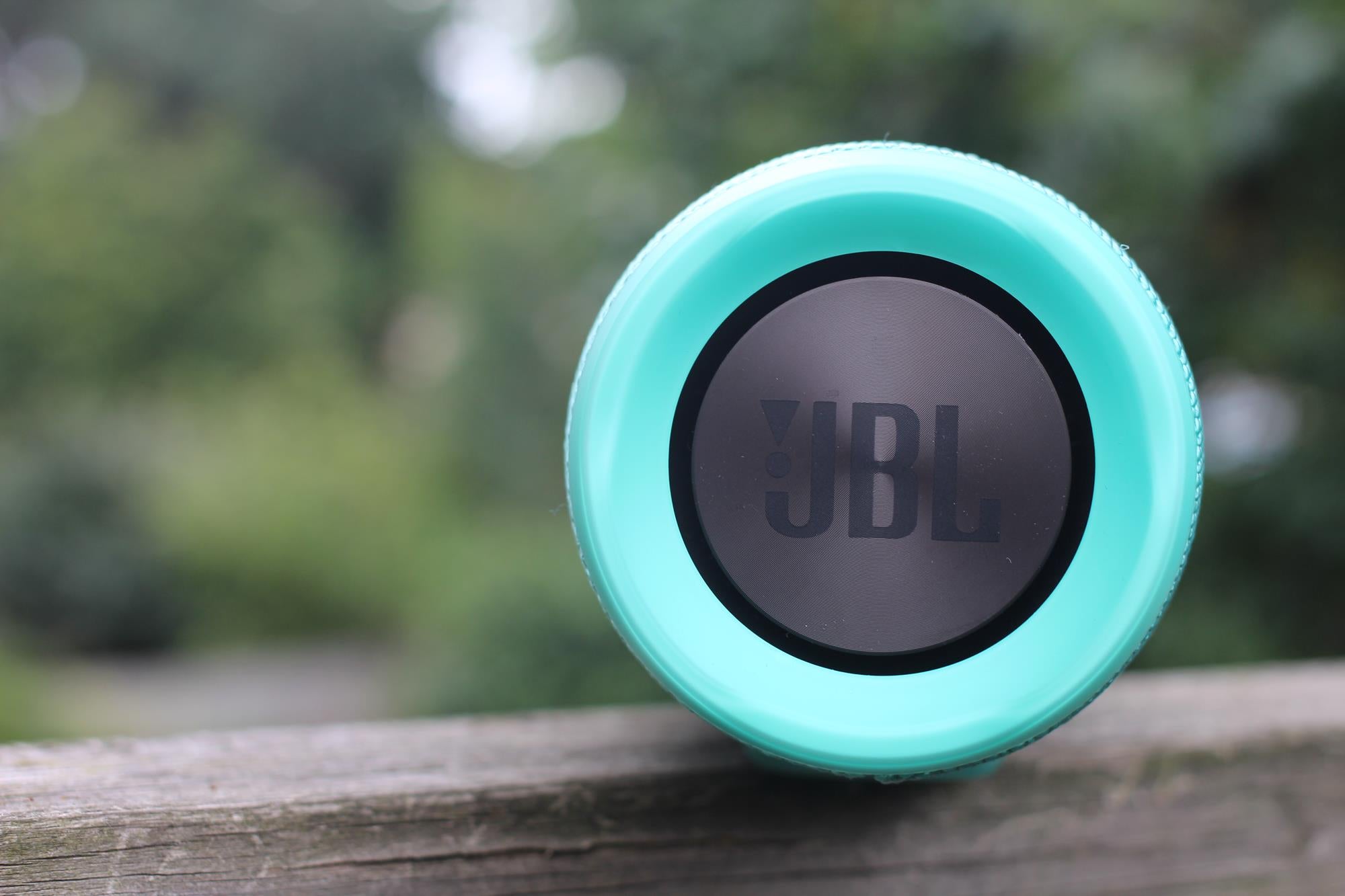 It goes nice and loud too, with propulsive, well-controlled bass that doesn’t get too boomy. If you pump the Charge 3 you can really see those woofers at each end doing their thing – it can be quite mesmerising to literally see your music playing.

That said, the mid-range can be a little lacking sometimes, with vocals occasionally coming across a little thin and busier tracks getting a bit muddled, but it’s the exception rather than the rule and the top-end is always crisp and taut.

Sometimes I found there to be a bit of a mismatch between the volume of the music and notification sounds that are sent from your phone when you get a text, and the on/off noises are a bit Jar Jar Binks, but they do the job without sending you scurrying to the instructions.

There’s an accompanying app that you use to pair up other speakers and change the default function of the play/pause button, but if you never downloaded it you wouldn’t be missing out. 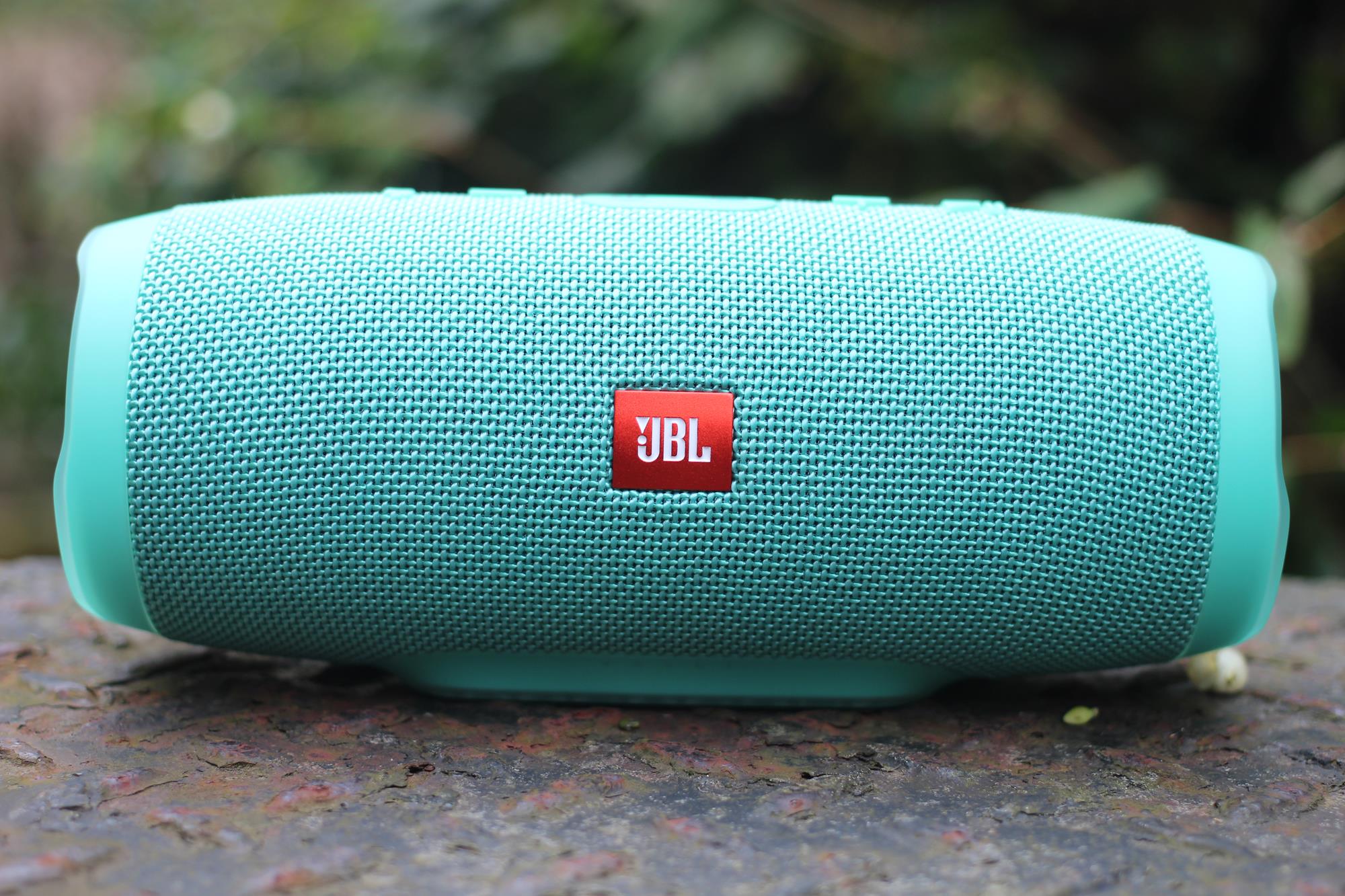 Should I buy the JBL Charge 3?

There’s very little to criticise the Charge 3 for. Its robust design means it doesn’t really give off the impression of being a premium product but on the whole its audio performance would beg to differ.

It sounds better than UE’s Wonderboom but it’s more expensive and isn’t as compact, while it’s cheaper than the UE Boom 2 but probably doesn’t sound quite as good and definitely isn’t as neat, which leaves you with a complicated three way.

Price will probably be the deciding factor for many, and if you decide to spend £135 on the Charge 3, you won’t have any regrets at all.