Superficially very exciting to listen to, but the JBL is a lot of sound and fury without enough substance

Everyone loves the effect Dolby Atmos object-based sound can have on a film soundtrack, but out in the real world very few of us have the space or the inclination to deploy speakers in front, behind and above us in our front rooms. So if we want a little taste of the true Atmos experience we’ve had in the cinema, a soundbar with some thoughtful driver placement and digital sound processing would seem to be the way to go.

Sennheiser has achieved something pretty impressive with its Ambeo soundbar, but it costs more than the majority of TVs and is imposingly big at the same time. More recently Sonos got in on the act with its Arc soundbar – it’s less of a bloater than the Sennheiser, it’s more affordable, and to an extent it gets the Atmos job done.

JBL thinks it’s squared the ‘Atmos sound without the Atmos rigmarole’ circle. JBL reckons authentic Atmos performance can be delivered without the need for miles of wiring or, indeed, carving into the ceiling of your room. JBL thinks Bar 9.1 is the way forward. Is it?

JBL Bar 9.1 design — A detachable surround system with speakers that can be placed anywhere in a room

‘Thoughtful’ is a pretty good way to describe the design of the Bar 9.1. ‘Impressive’ might do just as well. It’s hard to imagine a more straightforward way of achieving true surround-sound.

The soundbar itself is a modular, three-piece design. The central portion is roughly 88cm long, and at either end there’s a detachable module of 17cm or so – they attach to the big central section by way of quite fierce magnets. 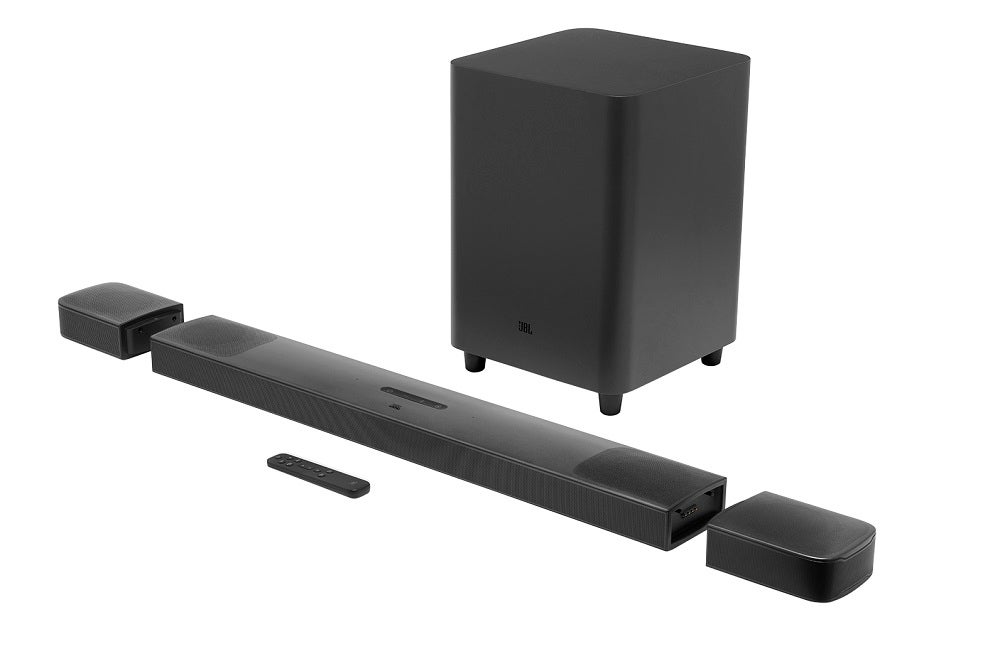 With the modules clipped to the ends of the bar, the JBL mimics the ‘front/left/right’ channels in a surround-sound set-up, with the four upward-firing drivers reflecting from the ceiling to serve up the impression of height to the sound. Detach the modules, though, and they can be positioned anywhere you like – ideally behind your seated position, of course, but alongside is fine too. Anywhere convenient, really – and then you’ve two proper rear channels, as well as height-channel information reflecting from a different area of the ceiling.

The modules are battery-powered (they charge when clipped to the main portion of the soundbar), and they come with little magnetic cradles to stand in – so there’s no need for wiring, speaker stands or any of that other unattractive and inconvenient home cinema gubbins.

Forming the ‘.1’ part of the ‘5.1.4’ Dolby Atmos configuration the Bar 9.1 wants to emulate is a fairly substantial subwoofer. A 25cm driver powered by 300 watts looks promising on paper – and the sub’s wireless connectivity is welcome too, because at 44 x 31 x 31cm it’s no shrinking violet.

The subwoofer itself feels just slightly prosaic in its materials, although there’s absolutely nothing wrong with the way it’s put together. And the rest of the Bar 9.1 is genuinely quite pleasant to the touch, smoothly finished and flawlessly constructed. And at just a touch over 6cm tall, the soundbar element ought to sit nicely beneath more-or-less any TV – just as long as you don’t obstruct the upward-facing drivers, of course.

Options for getting audio information into the Bar 9.1 in the first place are fairly numerous.

Hard-wired options extend as far as an Ethernet socket, eARC HDMI, and HDMI input with 4K passthrough (including Dolby Vision). And there’s a digital optical socket, too. Wi-Fi is on board too, naturally enough, and compatibility with Bluetooth 4.2, AirPlay and Chromecast offer extra flexibility. 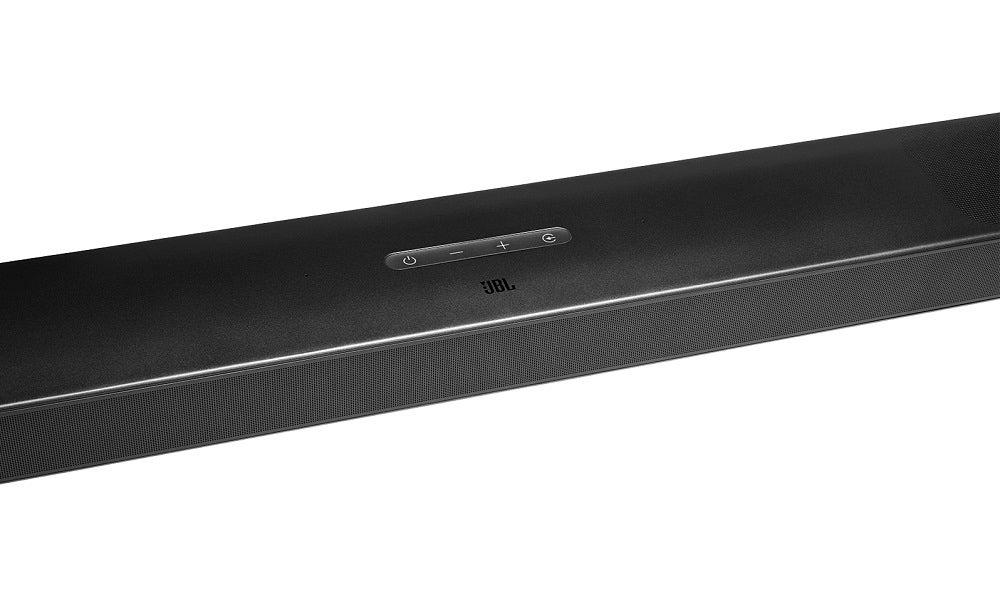 Set-up and control is strictly via the slim little remote control. The Bar 9.1 can calibrate itself to its environment quite quickly, simply by firing off a rapid series of test-tones – after that, the subwoofer level, rear effects intensity and height-channel level can all be individually adjusted in increments from ‘1’ to ‘5’. For watching non-surround content the rear and height channels can be defeated altogether, and it’s also possible to trim audio delay using the remote control too – which are all welcome features.

JBL Bar 9.1 sound quality — Plenty of shock and awe, not so much in way of nuance

If you’re after maximum shock and awe from your new Dolby Atmos soundbar, the JBL needs to be very near the top of your shortlist. In terms of sheer scale, presence and out-and-out volume, nothing at this sort of money comes anywhere close to filling a room with sound as effectively as the Bar 9.1.

With the modules deployed as rear speakers and the auto-calibration process run, the positioning of effects is much more reminiscent of a true Dolby Atmos system than any other soundbar, at any price, can manage. The impression of height is persuasive, the placement of rear surround effects is unarguable and, thanks to that wireless subwoofer, low-frequency presence is prodigious. With the Dolby Atmos soundtrack to Spike Lee’s Da 5 Bloods streaming in via Netflix, the JBL serves up a sound of significant magnitude.

JBL is claiming a frequency response for the Bar 9.1 system of 34Hz – 20kHz, and on this evidence it seems realistic. The subwoofer delves deep, while at the opposite end of the frequency range there’s a nicely judged degree of brilliance and attack from that total of five tweeters. In between, midrange clarity and detail is sufficient for dialogue to project forwards and remain easy to follow. 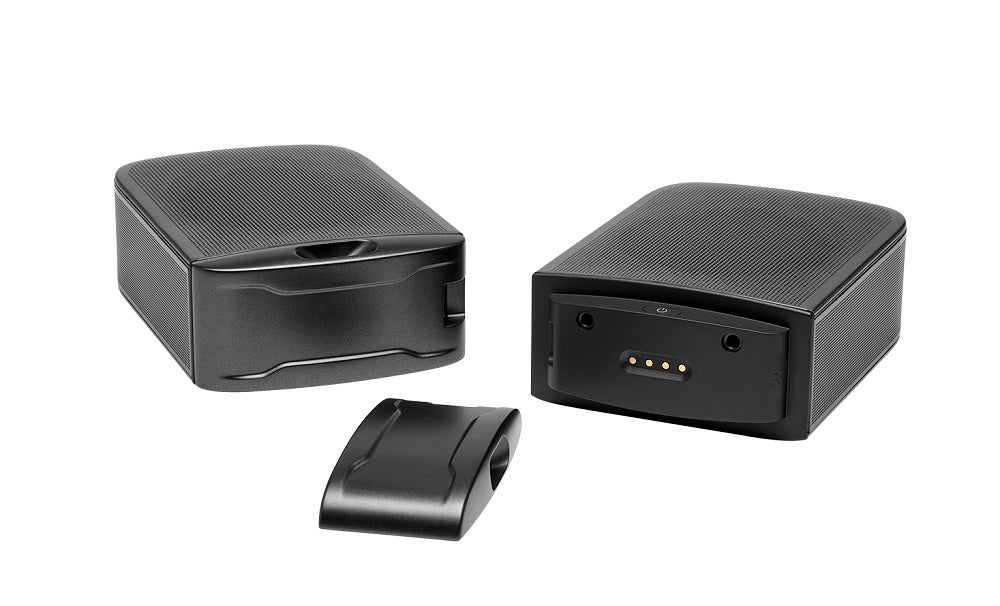 But when you get beyond the straight-ahead size of the sound the JBL is capable of serving up, limitations quite quickly manifest themselves.

Bass, for instance, is lacking in variation – that subwoofer is most certainly capable of deep reinforcement, but it’s quite monotonal in its approach. There’s not a huge amount of nuance or texture in the low frequencies it delivers, and as a consequence it rumbles away with scant variation. There’s not much positivity where the start and stop of individual bass sounds is concerned, either, and subsequently not much genuine punch.

And when the effects are coming thick and fast, the opposite end of the frequency range is similarly indistinct. If the effects are moving rapidly, the JBL struggles to keep up – and so what should be individual treble events turn into an unbroken wash of sound.

It’s not the most dynamic system you ever heard, either. Oh, it’ll go plenty loud enough – if you want the neighbours to know you’ve just dropped a grand on a new audio system, they’ll be in no doubt. But there’s not much distance between quieter, more contemplative moments and all-out full-on action overload. And there’s not a huge amount of tonal variation to what the JBL does, either, which makes the midrange (and its all-important dialogue) much less characterful and informative than it might be.

Taken as a whole, then, the Bar 9.1 is a little over-confident. Where sheer power and attack is concerned, you’ll never find it wanting – but if it’s a Dolby Atmos-style impression of three-dimensionality you were hoping for, you may feel a little let down.

No other soundbar, or soundbar/subwoofer combo, for that matter, is better than the JBL Bar 9.1 when it comes to delivering authentic height to a soundtrack, nor at placing surround-sound effects truly behind your seated position.

As the JBL is a modular design, its detachable speakers can be placed anywhere, handy for those who don’t want to confirm to the tradition of a surround set-up.

The Sonos Arc, for instance, doesn’t have the scope of the JBL nor the scale, it has precision, dynamism and is a more characterful listen – for movies and music.