The Jays t-JAYS series is quite unlike the headphone maker’s other pairs in one respect. They look rather odd, like a thumbnail that’s been embossed into a matt black lozenge. However, we’re not ones to judge books by covers or earphones by their shape. At around £79.99, they bridge the gap between the budget a-JAYS and the rather special dual-driver q-JAYS.

This is the top-end model in the t-JAYS line-up, benefiting from the three-button handsfree kit and remote control seen in the other “Four” Jays earphones. What you’ll notice before this, though, is their odd design. Jays is known for making relatively petite earphones, having packed two armature drivers into the tiny Jays q-JAYS, but the T-JAYS are relatively oversized – in spite of using single dynamic drivers.

This extra bulk hasn’t resulted in extra weight, though, with the t-JAYS Four weighing just 10g. They don’t stick out conspicuously from your ear either, curving around the entrance to your ear canal and behind the lip of cartilage above your earlobe to help them stay in place.

In-situ, they fit in much more happily with the rest of the attractive Jays family, decked-out in the brand’s characteristic soft touch black plastic finish. The only deviation from this is the sliver of silver plastic along the back edge of each bud – it doesn’t have a function as such but is a nice reprieve from the moody black.

There are, however, a few disappointments to the design. It’s a little trickier than normal to get a good fit with the supplied rubber tips, in part down to the non-bullet shape, and after some fiddling the noise isolation was still average for an IEM. This may be in part down to the little vents bored into the inner side of each earpiece.

Unless you’ll spend every day aboard the London Tube or walking past building sites, it’s a minor concern. We were less able to forget the weight issue. The buds are extremely light, but the 3.5mm jack junction half-way down the cable isn’t. As an alternative to using a proper removable cable, the Jays T-Jays split the cable in two, so that if the jack at the end starts to fail you can simply replace an expensive stretch of wire. But the chunky housing of this junction pulls down on the earpieces annoyingly, becoming an issue when they don’t create a vacuum-like grip in your ear canal. 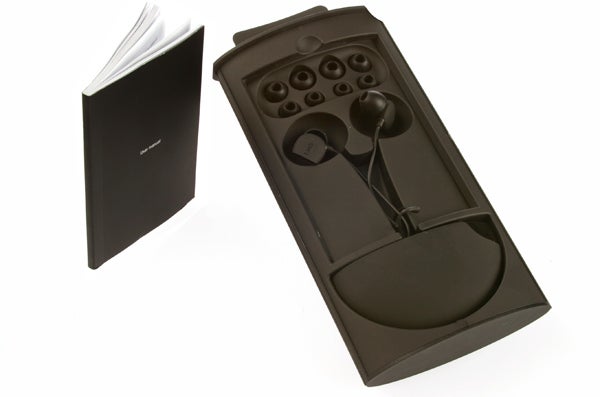 This seems an unfortunate oversight when, as we noted when reviewing the a-JAYS Four, the Jays handsfree housing it as light as a feather. It’s a three-button jobbie designed for use with iOS devices. A pinhole mic sits on the back to let you take calls, and the buttons offer full playback control over your music. The side buttons alter volume while the central button takes on multiple music duties – one tap for play/pause, two to skip to the next track and three to head back a track.

Without the niggling irritation of the cable junction, the t-JAYS Four would have been a great success in design terms – comfortable, light and surprisingly good-looking in action. It’s not a massive complaint, but in the high-competition world of in-ear headphones, small mis-steps can be costly.

In the past, we’ve been great supporters of the Jays sound. Easy-going and lush in several of Jays’s ranges, it’s very easy to get on with. The t-JAYS Four sound is no different.

These earphones are detailed and clear, while offering a generous bottom end that, while slightly more voluminous than is accurate, never booms or bloats out. It’s a sound we find very easy to live with, for hour-after-hour of fatigue-free listening.

There is a lack of mid-range texture and presence, though, that gives the t-JAYS Four some trouble in making more raucous music sound suitably aggressive and in-your-face. It also ensures that these earphones need a decent volume level to produce best results unless you’re in a quiet environment – with a full and warm, but slightly delicate sound they don’t have the mid-range grit (or sound isolation) to contend with a great deal of ambient noise.

There’s a slight softness here too, and the t-JAYS Four simply struggle to render vocals as realistically or with as much punch as the sub-£100 range’s top performers – the Nocs NS400 and Phonak PFE012. Without being able to fully render the inflections in singers’ voices, impact can be spoilt. For example, Prince doesn’t sound like he wants to get off with everything in the room in his 1979 self-titled album, when piped through the t-JAYS Four. And that’s a cardinal audio sin. 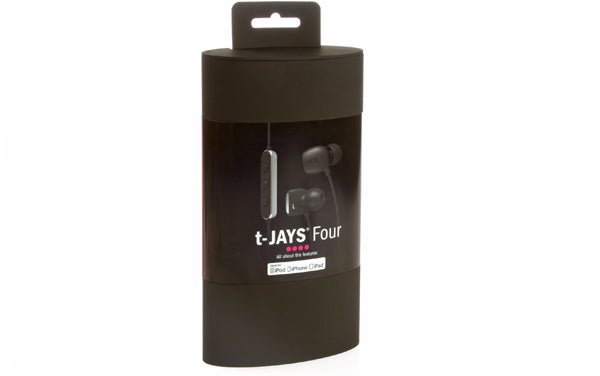 Other than not quite having the tight-bunned tautness to make some music sound quite as aggressive or as sexually suggestive as we’d like, the t-JAYS Four are extremely enjoyable earphones. Their laid-back, open sound has a light touch that can make more relaxed tunes sound all-the-more… relaxing. In this respect, they continue the standard set by the model one step down, the a-JAYS Four.

However, we can’t forget that there are better earphones out there that offer the same iPhone remote functionality. Yes, we’re talking about the Nocs NS400. Close relative of 2011 TrustedReviews Awards Phonak nominee, Phonak PFE 022 are also – as ever – worth serious consideration, offering a single-button handsfree housing. The Jays t-JAYS Four – they’re good but don’t lead the pack among similarly-priced alternatives.

Light of weight, open of sound and interesting in design, the t-JAYS Four seem a great addition to Jays’s earphone line-up. There are, however, some problems. The cable design leaves an annoying junction box dangling down from your ears and there’s a slight softness to the sound that ensures they can’t beat the very best at this highly-competitive sub-£100 price.