£40 will often buy you surprisingly little. If you live in London, it’s a couple of cinema tickets, some popcorn and accompanying drinks, or a pair of tickets to London Zoo. Alternatively, it’s hundreds of hours of musical bliss, with something like a pair of the Jays a-JAYS One earphones.

Although Jays is not the biggest name in headphones, we’re no strangers to the company’s line-up – which spans from entry-level sets like this to the high-end Jays q-JAYS. We’ve also reviewed the precursor to these earphones, the a-JAYS One. This new pair is very similar, but now includes an on-cable handsfree kit to let you take phone calls while plugged in.

Our appreciation of the Jays a-JAYS One+ look hasn’t diminished since August. They’re matt black, chunky and pleasantly simple in design. There are no loud touches of colour and no superfluous bits, apart from the name of the product written down the cable in white, which leaves the buds themselves completely devoid of any text.

This cable writing is possible because the wire is flat rather than round. Flat cables are meant to help avoid tangles more effectively than the traditional round type. Although by no means immune to tangling, in part down to the rubbery finish of the cable, it’s a strategy that works in part at least. And it’s just as important in giving the a-JAYS One a look that differentiates them from big rivals like the Sennheiser CX300 and MM70. 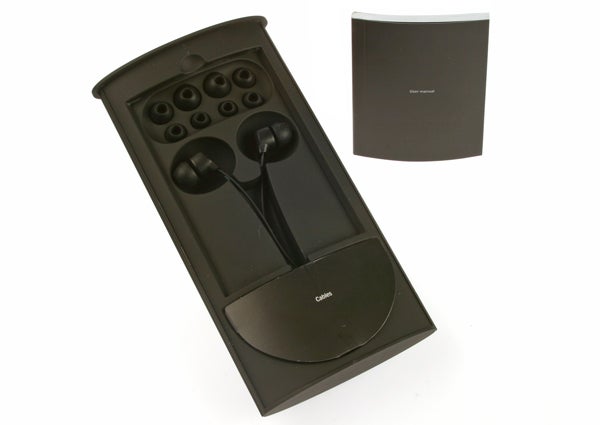 Features of the cable also help to differentiate this “plus” model from the mic-free a-JAYS One. Where that cheaper model uses a straight jack, the One+ use a right-angle jack, as seen in the pricier a-Jays Four. We much prefer this type of jack, as it helps to prevent damage when your phone or MP3 player is bobbing about in your pocket. Plus, in this case, it just looks that little bit classier.

The a-JAYS One really don’t help to make the a-Jays range easier to get your head around, though. After all, the a-JAYS Four have a handsfree kit, and can often be bought for around the same price as the One . So what’s the difference?

Where the Four earphones use a three-buttoned remote, the One has just a single button. The Four’s unit is designed primarily to work with iOS devices, where this handsfree housing is intended to work with many more phones, including iPhones, iPods, Android Phones, BlackBerrys and Windows Phones. The high-end impression that the “Four” tag brings the series sibling is unhelpful, because the two are much closer than you might imagine – which makes sense when the price disparity isn’t great, at around ten pounds. 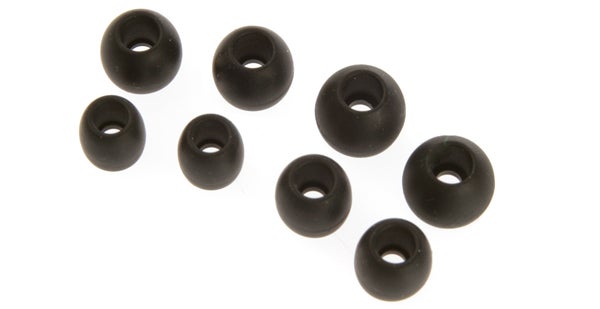 The remote housing works perfectly, letting you take calls and control music with iOS devices. One click to play/pause, two to skip ahead a track and three in a row to skip back. Android devices can eke more functionality out of the button with the help of a free app, called Jays Headset Control. It lets you specify exactly what each sequence of taps and prolonged presses does – a up to five different commands when playing music, all from a single button.

The control housing itself is very tasteful, carrying on the lovably chunky aesthetic used in the earphones themselves. It adds no discernable weight, is discreet and feels well-made. Even if you’re not into chatting away to empty air, the additional music functionality may make it worth the upgrade from the “non+” model for some. However, when the original One model can be snapped-up for around £17, we’d have to put some thought into it.

The Jays a-JAYS One use the same size speaker as the rest of the a-JAYS series. It’s an 8.6mm dynamic driver, the type used in virtually all sub-£80 earphones, and known for its ability to bring plenty of bass to the table.

Predictably, the One has a sound signature very similar to the rest of the a-JAYS series. In a head-to-head test, we found this new model has slightly better treble performance than the original One set, offering better high-end resolution and a tone that’s a shade brighter. 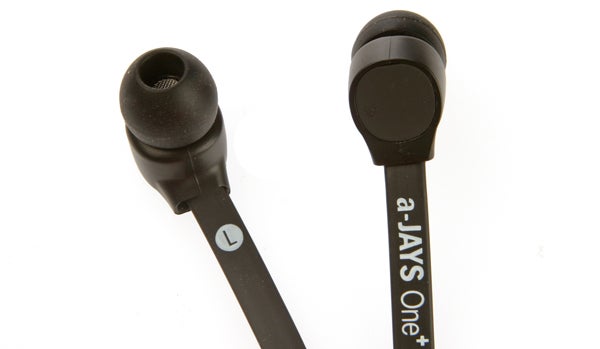 Other than that, the sonic personality remains exactly the same. They’re bassy, smooth and thoroughly easy-going. Completely free of harshness, they’re earphones you can plug in and while the hours away with, with no fear of wearing out your ears with an over-zealous treble. It’s the sumptuous smoothness that makes us keep coming back to the a-JAYS One, and makes them a good alternative to Sennheiser’s excellent CX400/500. Sennheiser offers a big more oomph and power, but both offer sonic personalities worth getting to know a lot better.

As with the previous a-JAYS models, our one lingering criticism is that the bass is expanded beyond what’s truly accurate. This is in part what helps to bring warmth in, further taming tracks that might sound harsh through other buds, but it also ensures that they miss out on producing high-end sound. It becomes most apparent in music with a prominent kick drum, where the low-end thuds sound like they need a few more cracks of the whip before being fully tamed.

But should we really expect more at this price? The a-JAYS One ‘s biggest problem in our eyes is that if you’re willing to forego the mic housing, you can cut a significant chunk out of the price – and while we did note some difference in sound, it’s a step or three rather than a giant leap. However, the slightly different tone does suggest that the One benefit from some of the sound improvements applied to the a-JAYS Three and Four models. Jays’s website does not reflect this.

Whether you can stomach the extra £20 or not, the Jays a-JAYS One cement our opinion that, alongside other smaller industry players like SoundMagic, Jays should be taken more seriously by a lot more people. Their products can certainly compete with the big names, at a price that makes a lot of sense too.

Jays’s latest addition to the a-JAYS range is another winner, bringing the warm sound we admired in the series’s previous sets. New to this model is a versatile one-button handsfree kit-come-remote, the right-angle jack of the “high-end” a-JAYS pairs and sound quality that edges out the basic One set with increased clarity. Smooth and easy-going, they provide an enjoyable all-day listen.