What are the Jaybird Run?

True wireless earbuds are hot in the headphones market right now and there really is no better use for them than for exercise. When you look around at the various ‘neckband’ designs that bounce on your neck or get in the way, to be liberated of cables in any form make even more sense.

The Jaybird Run constitute the fitness audio specialist’s first foray into this area, and it achieves this by applying the know-how it’s acquired over years of making sweat-resistant, secure-fitting headphones for fitness fanatics.

The Jaybird Run are available in either black or white finishes, both with silver accents. The Bluetooth antennas are integrated into those silver parts, providing a clever way to help keep down the size of the earbuds. They’re a fraction smaller than the Jabra Elite Sport, for example – but in fairness, those wireless earbuds do also pack in a lot more tech, including a heart rate monitor. Still, the Jaybird Run sit relatively flush in your ear, with a flatter design that doesn’t protrude like many of the more bullet-shaped options out there. 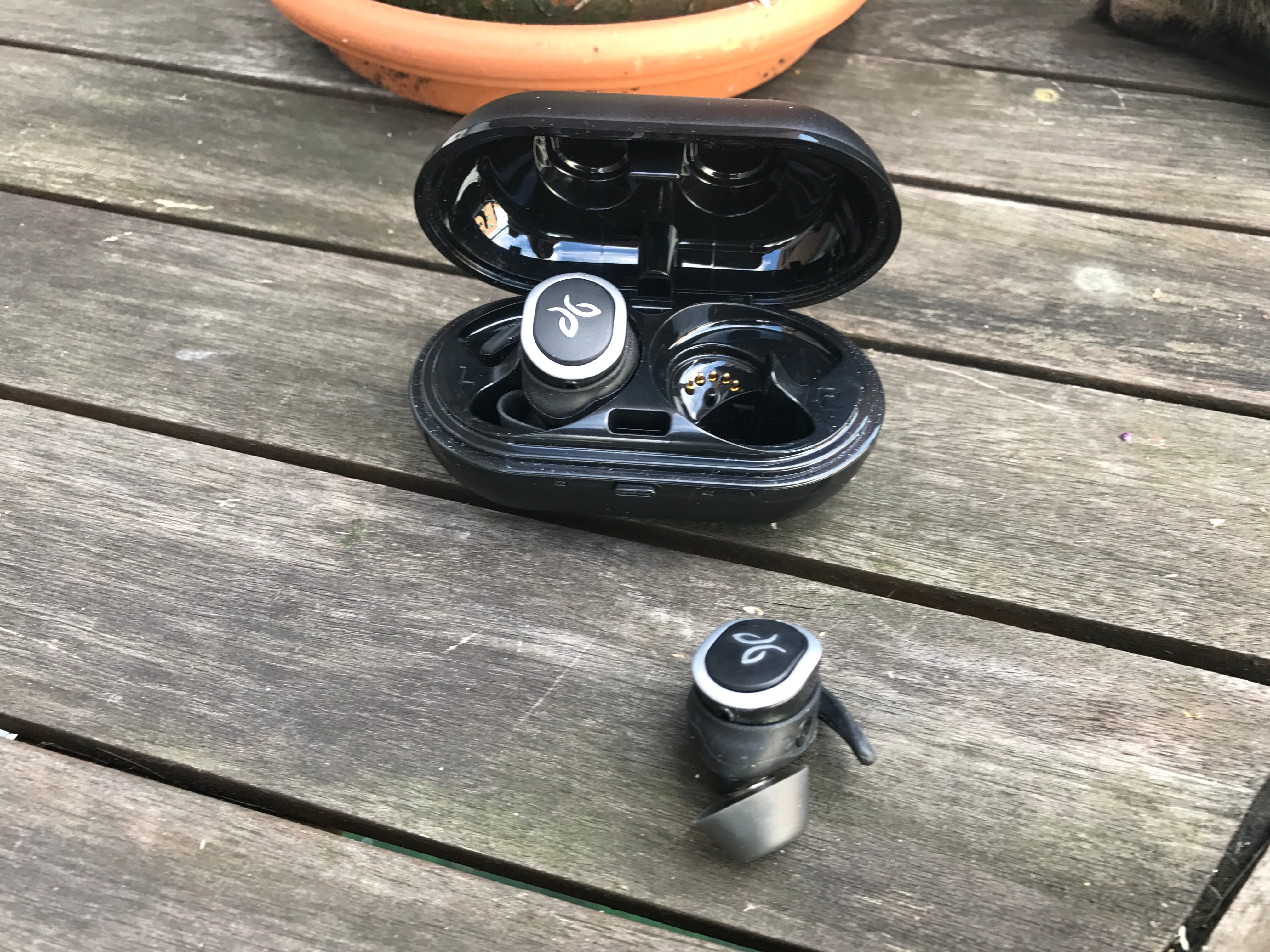 The outside of each earbud casing is home to the Jaybird logo, and behind this you’ll find a discreet single button. This rather limits the level of control you have for each earbud over the four-way button of the Jabra Elite Sport. These can be configured to either act as Play/Pause and Answer/Reject for calls on the right earbud, and Siri/Google Assistant available on the left. Double-pressing each earbud skips forwards or backwards.

Or, alternatively, you can configure the buttons as volume up and Answer/Reject on the right and volume down on the left earbud. In this mode, double-pressing each earbud skips a track forwards or backwards. I prefer having volume adjustment over access to a digital assistant, but then I rue the lack of being able to pause my music.

It’s all about the fit when it comes to true wireless buds, even more so if they’re designed for high-intensity exercise. As is standard with Jaybird, you get a range of fit options in the box. These include two different-sized round silicone tips, as well as two pairs of oval-shaped tips. The latter create a better seal for passive isolation. With that said, I’d have liked to have seen a Comply foam tip-like option such as that supplied with the Jaybird X3, because even the oval-shaped option didn’t quite block out the distracting sound of the gym where I spent some duration of my test period.

Also in the box you’ll discover four different-sized wingtips, designed to catch your outer ear and lock the earbuds in place. With such a range of sizes available, all but the most awkwardly shaped ears should be well catered for. 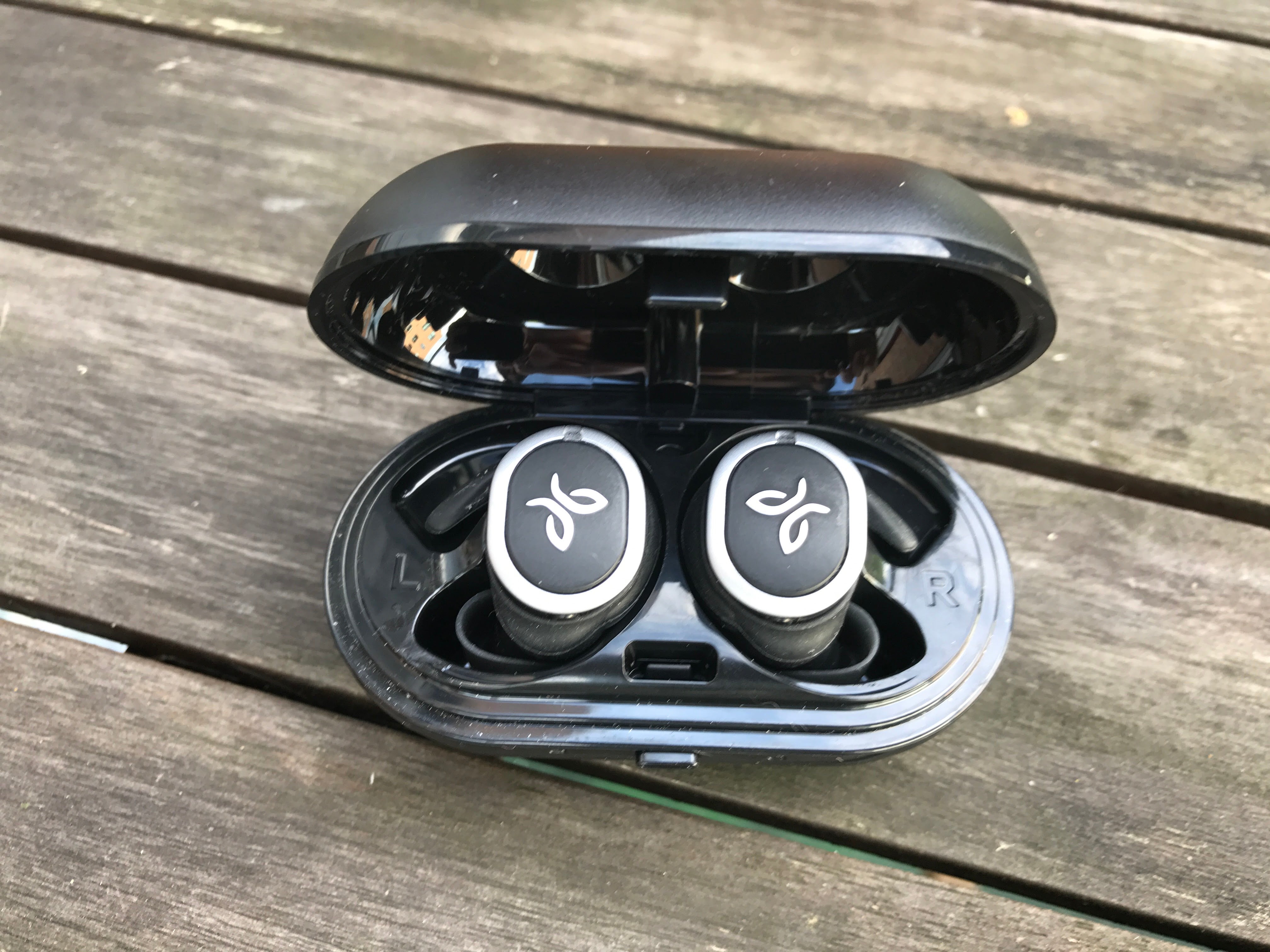 I experienced no issue with the overall fit, although I did find the tips became a little looser with sweat build-up during a longer run. It meant that one bud felt a little less secure than the other, which proved more a distraction than an actual problem. At no point did the earbuds actually come loose – aside from when I was too lazy to take them out of my ears when removing a compression top at the end of a workout. This was a good test of their resilience at least, and they survived several drops from ear height without any issue and also while being covered in sweat.

The Jaybird Run work alongside Jaybird’s MySound app on iOS and Android. As is the case with the Jaybird X3, this allows you to customise the EQ of the Run, tweaking the profile to your liking. These include a Flat EQ and Jaybird’s Signature, which gives you an S-shaped profile, providing a little more bass warmth, with a touch less in the mid-range.

I found this was my preference, but the great news is that you can also completely customise the EQ using an easy-to-use EQ curve, dragging the bass, mid and treble to your own taste. The customisation is saved directly to the earbuds, so you don’t have to keep the app installed. Nevertheless, it’s worth keeping it installed if you like having a specific EQ for your heart-pounding playlist and another for listening to podcasts. As for the sound quality, it’s a similar experience to the Jaybird X3, with both models sharing a 6mm driver. I was fond of the Jaybird X3’s sound performance for exercise, provided I was able to achieve an adequate seal. When lifting weights or pounding the pavement there’s enough energy and presence to the sound to help you focus and get in the zone. Bass is generally tight and emphatic, but there are instances where it can sound a tad boomy.

There’s a microphone built into the right earbud, which I found worked without issue for calls. You only get call audio from the right earbud, even if you have the left one turned on and in your ears. The left also has a microphone that lets in a little bit of the ambient noise, so you don’t end up shouting. There’s no ‘hear through’ mode, however, which lets you hear the outside world with the earbuds inserted in your ears. Jaybird said this was because it couldn’t get an acceptable level of performance, although I don’t recall experiencing any issues with the Jabra Elite Sport’s implementation.

Bluetooth range is excellent, helped by the antenna placement. I had no problems leaving my phone one side of the gym floor and still maintaining a connection more than 10 metres away. However, I did encounter the odd stutter in the connection between the two buds themselves. If you’ve ever worn true wireless earbuds and then walked through a security tag gate in a store, you’ll probably have experienced a brief cut out of signal due to the interference. I’d occasionally experience something similar in instances where I was was nowhere near such a security tag gate. It wasn’t often, mind. 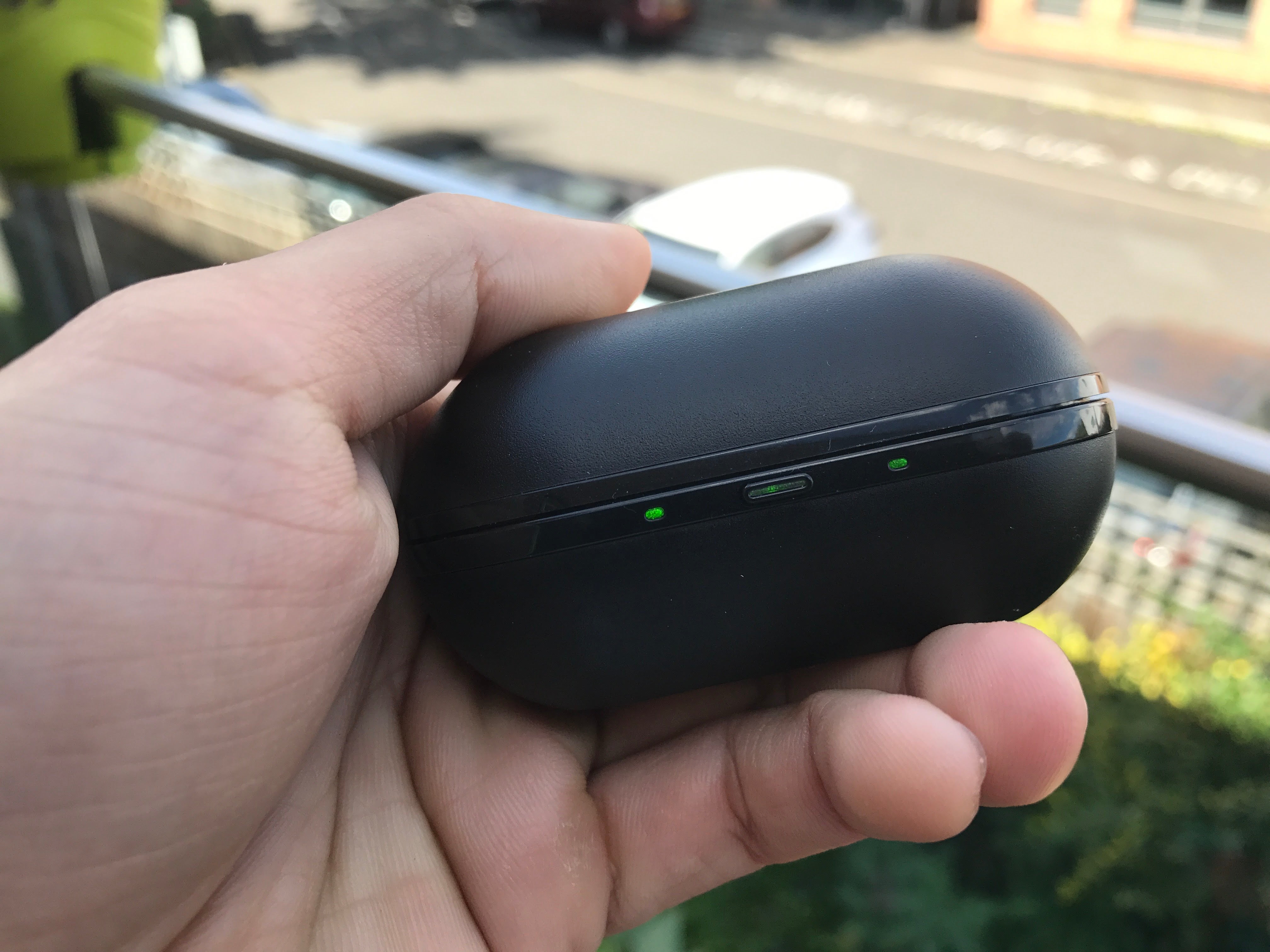 The earbuds come stowed in a hard charging case as is the norm for true wireless earphones. The capsule-shaped unit is a little bulky, but will fit in a pocket well enough. It also provides a good amount of protection.

Importantly, the case will provide eight hours of charge, topping up the four hours of battery life in each earbud. That gives you 12 hours in total, which is respectable. The real game-changer is the quick charging, however. With just five minutes in the case, you’ll get another hour of listening time, which is impressive.

Battery life measurements were all on the money throughout testing, too. I could take a pair of headphones from 20% warning to 40% after only a short time of them being in the case; the four hours of continuous use was also spot on. You can easily identify the charge level of the headphones and case thanks to small LEDs on the front and battery level read outs through audio prompts in the earbuds when turned on.

Should I buy the Jaybird Run? 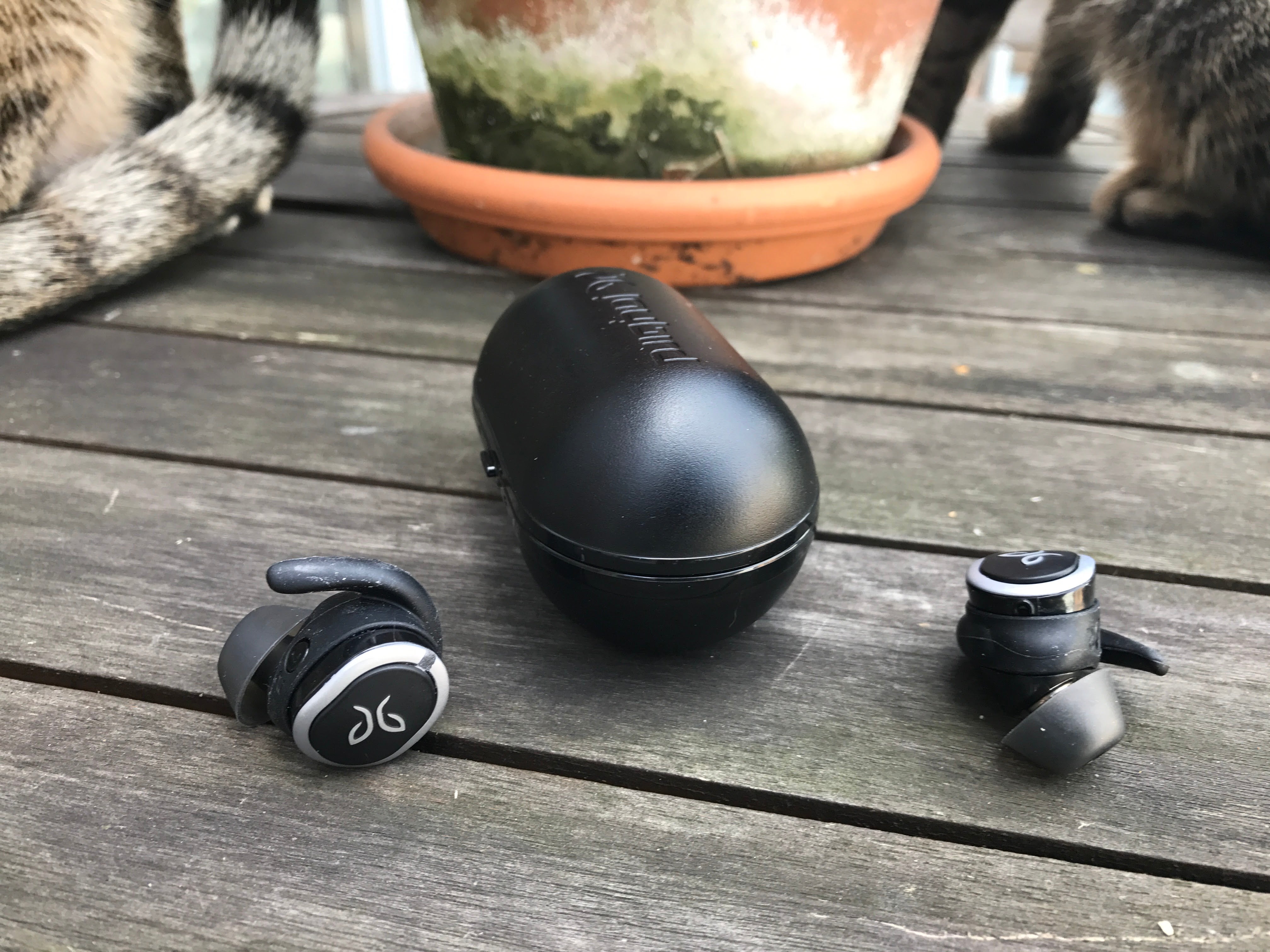 There’s a great deal to like about the Jaybird Run in terms of sound quality and especially for battery performance. That quick five-minute battery top-up really is phenomenal for those forgetting to charge. Both fit and comfort were also what I’d expect from Jaybird.

There are just a few niggling issues that stop them being the ultimate true wireless earbuds for exercise. I found the one-button controls limiting, even though Jaybird told me this was by choice to make using the earphones easier while exercising. I’d have also liked some Comply foam tips included for a greater seal. With all that said, the pros outweigh the cons.

Not quite perfect, but these true wireless earbuds charge incredibly quickly, sound great and won’t fall out of your ears.