What is the Jaybird Reign?

The Jaybird Reign is one of the most interesting fitness bands on the market. Unlike competing wearables from Fitbit, Misfit and Moov, the Reign doesn’t only track your performance: it also monitors the strain of workouts on your body by reading its users’ heart-rate variability (HRV).

In theory this means the Reign should offer a fuller view of your workout progress, allowing it to recommend rest times – a key feature missing on many trackers.

When it works, the Reign delivers on this promise. However, issues with its activity tracking and pairing process mean that you’ll often find your heart rate rising through frustration, rather than a satisfying work out. 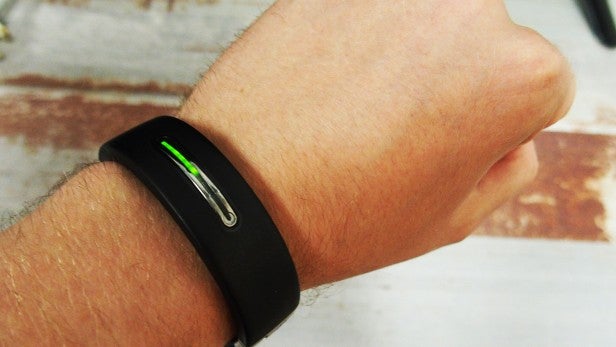 As wearables go, the Reign is nicely unassuming. In the box you’ll find the central Reign Pod, which handles all the unit’s tracking features, a variety of “premium” wrist, sport and ankle straps, cleaning tools and a proprietary charger dock.

The Pod doesn’t have any form of screen and the only design feature is a small LED strip that’s surrounded by silver trim. The LEDs are only used to tell the time and alert you when the pod is about to run out of charge – which usually happens after five-to-six days of constant use.

The bands come in various sizes and feature a similarly barebones look. While some people may prefer a flashier-looking wearable, I was a big fan of the black unit I reviewed. Its subtle design meant I was comfortable wearing it all day, not just when I was working out – which isn’t something I can say about the majority of trackers on the market.

The fact it’s waterproof is another selling point that made it easy for me to wear the band 24/7, allowing it to continue collecting health data uninterrupted. 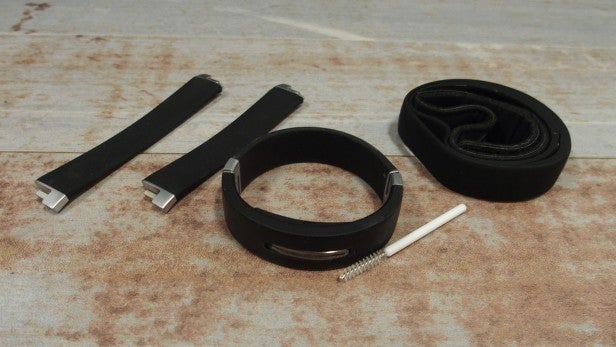 While it may be comfortable to wear, the Reign setup process is painful. In theory, it should be pretty simple; Jaybird claims it’s simply a matter of installing the Reign app on your iOS or Android smartphone, powering up Bluetooth and clicking the “pair new Reign” option. Following this you should just have to hold the Pod between your thumb and index finger and wait for the two units to find each other.

If only it were that simple. I tested the Reign with three different phones – a Nexus 5X, Honor 5X and Moto G. Each time I tried to pair the two devices, the pod didn’t connect on the first attempt, or the second, or the 16th! To cut a long story short, it took me more than half an hour, at least, on all three handsets.

The Reign aims to pull the same trick as the Basis Peak, and can automatically detect and track a variety of exercises.

Specifically, it should be able to determine when you’re walking, running, swimming, playing sports or sleeping. The only activity you have to take any action to track is cycling, where you have to move the Pod into the ankle strap to get accurate data. 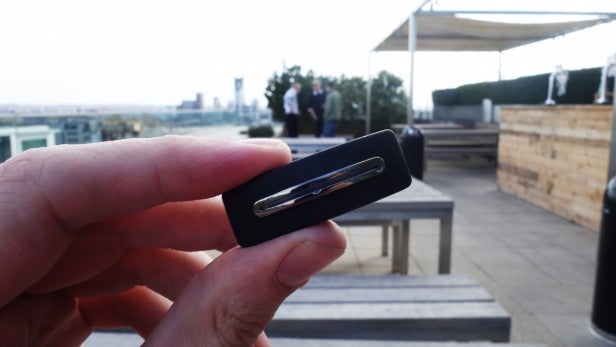 I’m a big fan of the Basis Peak and had high hopes for the Reign’s auto-tracking features as a result. Sadly, the Reign doesn’t entirely deliver on its promise.

The Reign managed to figure out what type of workout I was doing and when I was sleeping most of the time, but occasionally it threw up bizarre anomalies and completely missed the mark.

On one occasion when I was sleeping, the Reign reported I’d inexplicably gotten up and taken a midnight stroll. Thankfully, I’m also currently reviewing a D-Link smart home-monitoring kit, and after reviewing the footage recorded from its camera, I can confirm that I haven’t started sleepwalking.

On occasion, the run tracking was also wide of the mark. Testing it against the Microsoft Band 2 and Basis Peak on a track I know is roughly 5km long, the Reign’s distance was often a lower than it should be. Where the Band 2 and Basis Peak would record around 5km each time, the Reign would occasionally shave off half a kilometer.

This is a shame, sense when it works the Reign is great, and it’s mobile app is one of the best I’ve used.

The app is split into Activity, Sleep and Go Zone sections. The Activity section does what is says on the tin, presenting a timeline of your activities through the day and a percentage figure that displays how close you are to completing your daily “Activity Score”.

The timeline is a useful breakdown of everything you’ve done in a given day. You can get more specific breakdowns of your workouts by clicking on conveniently placed activity icons above the main timeline. Information on offer includes the amount of time you spend working out, how many calories you’ve burned and the distance you’ve travelled.

The Sleep section is similarly self-explanatory, providing you with a nightly summary of how long you’ve slept. It includes the usual breakdowns of when you were in a state of deep sleep, restlessness and awake during the night. It also features a recommended amount of sleep for the following evening.

The Go Zone is the most interesting feature of the Reign: it takes advantage of the Reign’s ability to record its users’ heart-rate variability (HRV). For non-fitness fanatics, HRV measures pauses and variations in the time between heart beats. The measurement is a medical indicator of whether your body is stressed and needs to rest. Of course, there are many other variables that affect your ability to work out, and using HRV alone shouldn’t be a replacement for listening to your body. 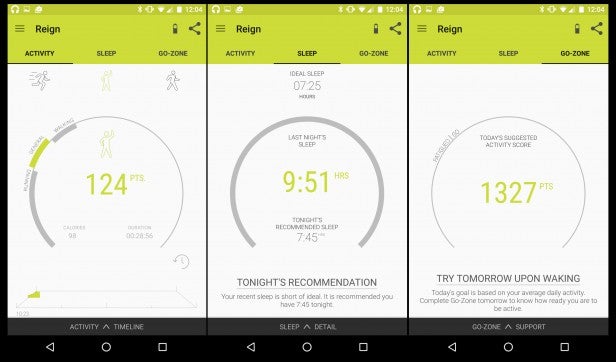 To get the HRV measurement, head to the Go Zone section of the app when you first wake up, tap the onscreen measurement icon and place your index finger on the top of the Reign pod while wearing it on your wrist. The Go Zone then uses the data to work out how fatigued your body is and tailors your activity goal for the day to this measurment.

This feature, while not hugely useful for optimising the content of my workouts, was handy for offering guidance on when I shouldn’t be working out. For example, following three consecutive days of running the Reign advised me not to run a fourth day, which was both helpful and a great excuse to sit back and spend my evening playing Dark Souls 3 instead.

However, there are still a few bugs with the system. The pairing issues I talked about earlier returned with a vengeance whenever I tried to pair the Reign pod with my smartphone. On too many occasions the pod would fail to pair and leave me unable to access my workout data.

The connectivity issues made it difficult to track my overall progress, as I’d regularly lose patience and not bother syncing the Pod if it acted up for more than 10 minutes – leaving multiple empty days in my history on the app.

I’m also slightly concerned that the app doesn’t allow you to check your heart rate during workouts, which is a key bit of info that most fitness fanatics will want to be aware of when tracking performance and progress. 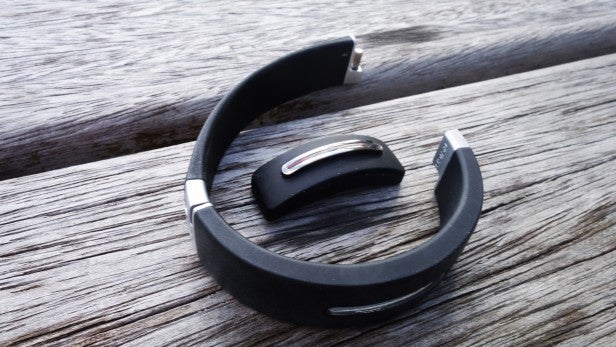 Should I buy the Jaybird Reign?

The Jaybird Reign is a genuinely interesting fitness tracker that, on paper, should be one of the best around. Being able to read its user’s HRV should enable the device to offer more specific, tailored advice how much you should workout each day and thereby avoiding unnecessary strains. And when it works properly, it does just that.

However, its overall appeal and usefulness is hampered by serious connectivity issues that make harvesting the all-important data a painful and frustrating experience. Most people will be better off investing in a more reliable wearable, such as the Moov Now or Basis Peak.