Aliph is a company with great ambition. After years of making arguably the best Bluetooth headsets on the market it has expanded radically in the last 18 months with the Up lifestyle monitor and hugely successful Jambox portable speaker. For a company clearly thinking big creating a larger Jambox appears a logical next step. 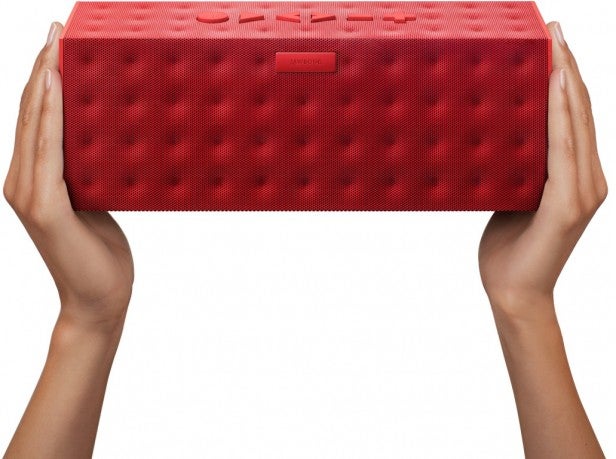 Design and Features
The wonderfully-named Big Jambox is the result and it is exactly what the name suggests: a larger version of the Jambox. This means a significant jump from 151 x 57 x 40mm and 327g to 256 x 93 x 80 mm and 1.23kg though the styling is identical. On paper this makes sense. The Jawbox may look like a large Lego brick, but it is beautifully made with a vibration absorbing rubber top and bottom, and smart metal grille around its circumference.

There are a few subtle tweaks – there are now eight rubberised feet on the bottom, play/pause and forward and back buttons added to the top and a dedicated Bluetooth pairing button on the right side. Aside from this the Big Jambox looks and feels exactly like a blown up Jambox. In terms of connectivity again it is a match: it connects to devices via Bluetooth or a 3.5mm auxiliary input, has an inbuilt microphone for conference calls and is compatible with the company’s MyTalk upgrade platform which offers firmware updates and apps. These include adding the ability to read out texts/emails, hear calendar alerts and more. 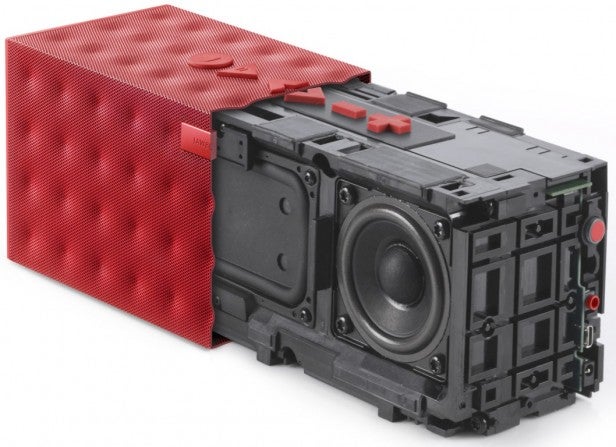 Naturally enough, however, the primary reason Aliph saw the need for a Big Jambox at all is just one reason: better sound. Like the Jambox the Big Jambox retains a 2.0 speaker arrangement, but each driver is enlarged (though unspecified) and there are now two opposing passive bass radiators instead of one for stronger, deeper bass response. In addition the Big Jambox has multiband compression to reduce distortion as appropriate and a loudness compensation algorithm which automatically adjusts the highs and lows to balance sound at different volume levels.

On top of this Aliph has equipped the Big Jambox with LiveAudio, a virtual 3D spatial sound technology, which aims to trick the ear into hearing wider stereo separation. The original Jambox had this feature added via a firmware update and like the Jambox, the Big Jambox can enable/disable it by simultaneously holding down the volume plus and minus buttons.

Performance
Does it all work for the Jawbone Big Jambox? Not really. What is beyond doubt it that the Big Jambox has far superior audio performance to the original Jambox. This really shouldn’t be in question of course, but in a reasonably large space the Big Jambox delivers room filling audio with a reasonably clean sound signature without overly boosted lows or shrill highs. The trouble is this pleasant experience occurs in a narrow volume band. Listen quietly and the bass is overpowering drowning out the midrange, listen at high volumes and the bass cannot keep up – particularly with bass heavy tracks where it cuts out in an act of self preservation.

As for LiveAudio, it is a mixed bag. Enabled its algorithms do indeed give a greater sense of stereo separation with a wide, almost swirling feel to various instruments in each track’s make-up. This is particularly welcome as without it the Big Jambox can’t escape a mono feeling, something almost unavoidable in portable speakers and even some larger docks. The trouble is LiveAudio’s attempts come at the expense of reduced volume and dynamic range which make it sound like it has been smothered by a pillow. Given the Big Jambox isn’t particularly loud for its increased size (Aliph doesn’t reveal specifications) this only compounds problems.

Before we get too harsh though it is worth pointing out not all of this is the speaker’s fault, it is Aliph’s. The company has bizarrely decided to leave out aptX, the hugely impressive Bluetooth protocol is a near compulsory addition to speakers and docks these days and greatly improves streaming audio quality over standard A2DP Bluetooth.

Consequently, connect a device to the Big Jambox with a 3.5mm cable and playback immediately improves. It isn’t a seismic change, but it is just enough to suggest the Big Jambox could’ve been better with a little more thought.

Conference Calls
It isn’t all bad in the audio department though, Aliph has called on its headset nous to equip the Big Jambox with a 360-degree omnidirectional microphone with excellent echo-cancellation and it results in extremely impressive conferencing calls. Calls via phone, Skype, Google Talk or any number of other VoIP services are clear and voices are distinct. It also works very well in loud environments successfully cancelling out unwanted background noise.

Battery Life
In addition Aliph has done a good job with the battery life. The company quotes up to 15 hours of continuous playback and while this drops substantially at high volumes we’d suggest the Jambox isn’t at its best in this zone in any case. You can take the Big Jambox away for the weekend and not worry about bringing a charger. Note the Big Jambox charges in just 2.5 hours over microUSB from a wall socket, but takes several times longer if charged via a laptop or desktop PC.

Value
All of which brings us to the wider question of portability. At 1.23Kg the Jawbone Big Jambox isn’t just a bit bigger than the Jambox, it is nearly 4x bigger and heavier. This places it in the same position as the 1.3Kg Bose SoundLink Wireless Speaker in that it is a little too large to pack on anything but a long trip but not that substantial for home listening.

Furthermore, the Big Jambox’s much touted angular Yves Behar design is also a problem on the move because its sharp corners and rough, almost cheese grater edges catch and scuff everything they come into contact with. Aliph doesn’t provide a carry case and here the Bose’s more rounded lines and inbuilt protective leather cover is far more practical. The SoundLink may lack conferencing capabilities, but it has better audio quality too. 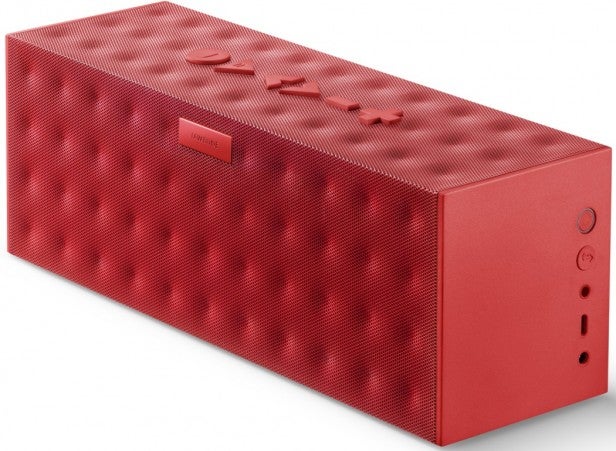 So what about pricing? The £160 price tag attached to the original Jambox forced us to label it a guilty pleasure, but the £260 RRP subsequently placed on the Big Jambox is simply too much to bear. At this price the equally bulky Bose is the more sensible buy (something we never thought would pass our lips), but more to the point there are myriad cheaper, smaller alternatives that offer far greater value and practicality for your money.

Alternatives
The most obvious is the superb Altec Lansing InMotion Air Wireless Speaker System which costs just £150, weighs a mere 450g, comes with a remote, built in handle, PC dongle and has better audio quality (yes, it employs aptX).

In addition, the £120 Soundfreaq Sound Step Recharge is a sonic match for the Big Jambox and incorporates a dock while the remarkable Pasce Minirig at just £85 is little bigger than a fist, beautifully made, lasts up to 60 hours on a charge and also stands toe-to-toe in the audio department, though it lacks Bluetooth.

Ultimately then what would make the Big Jambox a smart purchase? We’d argue a different set of priorities. The Big Jambox is primarily a design statement, however impractical at this size, and has audio performance that is perfectly fine in isolation along with excellent conferencing capabilities. For those with a healthy bank balance looking for a stylish, competent addition to their homes the Big Jambox will be ideal, but we’d urge you to look beyond the superficial.

Verdict
The Jawbone Big Jambox is an intriguing concept. It enlarges the successful Jambox approximately 4x throwing in larger speakers while retaining the Bluetooth connectivity and inbuilt mic for conference calls. As a style statement it works, but the angular design and 1.23Kg weight are impractical when travelling while the sound quality is unremarkable and bettered by several much cheaper portable speakers. Bigger isn’t always better.