Introduction
The Jamo D 600 is a THX Ultra 2 speaker system with a difference. Instead of the usual wardrobe-sized floorstanders you’d expect from a THX-badged system, Jamo has fashioned a set of five smaller wall-mountable speakers. They’ll still eat up a sizeable chunk of your space, but they’re a much more manageable size than, say, the floorstanders of the Crystal Acoustics T2-5.2-UL so should suit those looking for a top-of-the-line cinema room where space is a little more limited. 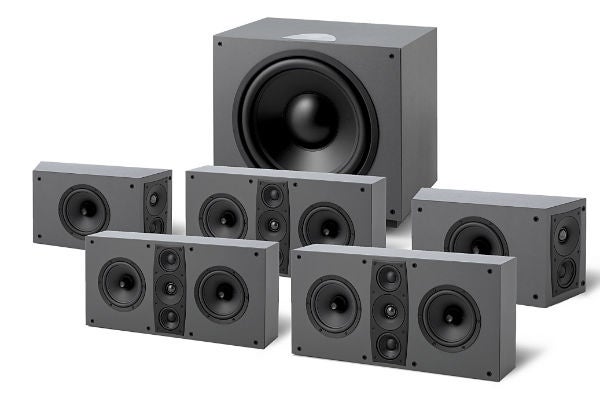 Design
But this reduction in size doesn’t bring about a compromise in quality. Even with these smaller boxes, the D 600 still has to satisfy THX’s exacting criteria. So even though the satellites’ smaller size means that their bass capabilities are restricted, the system makes up for it by turning over low-frequency duties to two enormous subwoofers.

In this 5.2 setup are three D 600 LCRs for the front and centre channels, a pair of D 600 SUR on rear channel duties and two D 600 SUB powered subwoofers. Build quality is incredible across the board, with cabinets that feel like they’re hewn from granite. 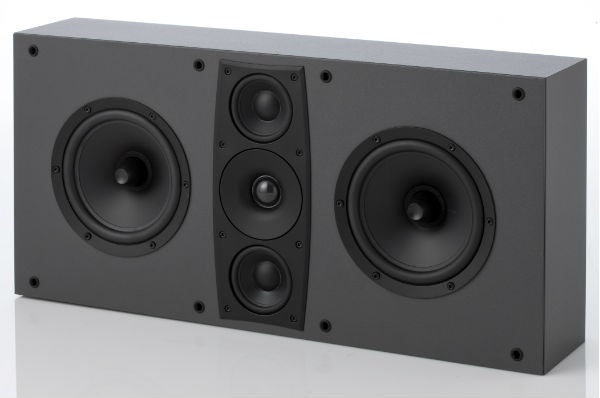 However, elegant isn’t a word we’d use to describe them. The hard-edged boxes and charcoal grey colour scheme could be deemed too industrial for some tastes, although it’s a nice break from gloss black – these really do look and feel like they could’ve been swiped from a professional cinema.

The D 600 LCRs are 170mm deep cuboids that each contain five front facing drivers. Meanwhile the rear speakers look similar to the D 600 LCR, with the same brutal combination of grey and black. But they’re a completely different type of speaker. As per the teachings of THX, the D 600 SURs are dipoles, which are designed to mask the direction in which effects are coming from, in turn offering a more immersive experience than direct radiating rears. To achieve this, they use a front-firing woofer with the mid-range and high-range drivers facing out at an angle from the two sides of the box. 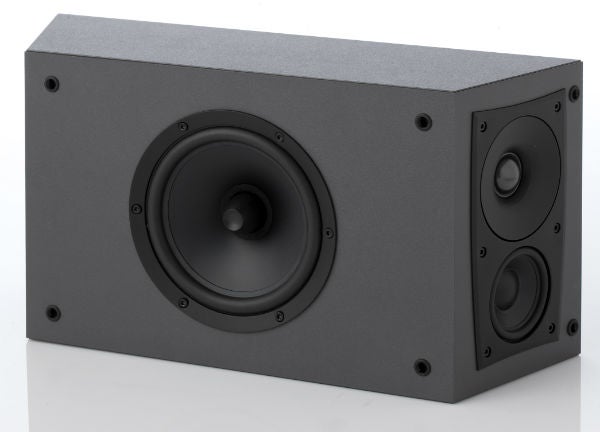 At around 58cm high and 50cm deep, the subwoofers are enormous. Fitting just one of these in your room could be quite a task, let alone two, but if you want a thunderously powerful home cinema experience in the way THX intended then you’d better start rearranging the furniture.

Their closed enclosures are styled to match the satellites in their charcoal grey finish. The 15in driver is hidden behind a removable black grille, and on top is a panel of touch-sensitive controls that allow you to activate the DSP settings and tweak volume, crossover and phase controls using the
/- keys. 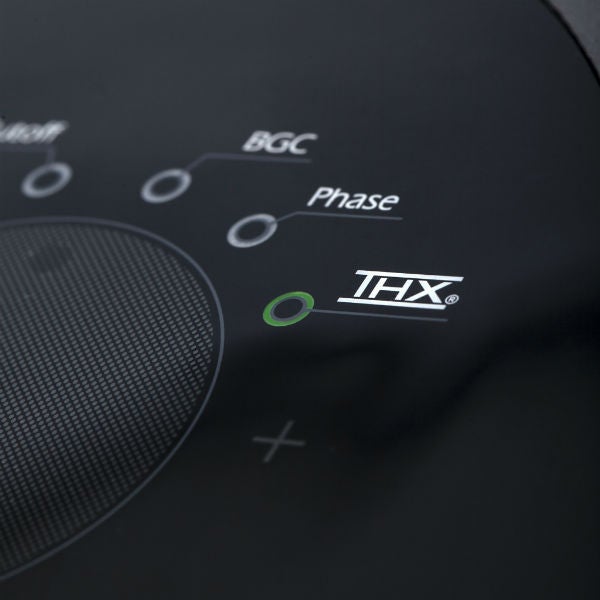 This control panel sounds funky, but feels oddly old-fashioned with its green lights and cumbersome operation. In fact the subs as a whole are a little underwhelming – they’re big, ugly and at 32kg a piece, very heavy. Lucky they’re meant to be hidden in corners then.

Features
The front and centre Jamo D 600 LCRs use a three-way closed design with two 165mm woofers, in between which are a 25mm tweeter and two 76mm woofers, making for a total frequency response range of 80Hz – 20kHz. The rear D 600 SURs use the same drivers but arranged as mentioned previous, with the higher frequency drivers facing out to the sides. 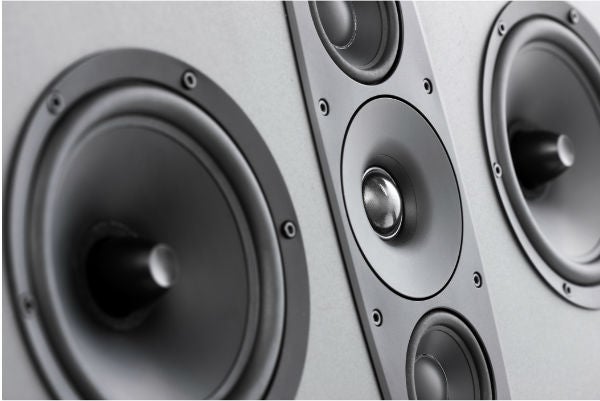 The system’s THX Ultra 2 certification means that the system can fill a room of up to 3,000 cubic feet and comfortably reach the THX Reference Level (85dB with 20dB of headroom) with no clipping or distortion. Additionally the subs offer THX Boundary Gain Compensation, which equalises bass output between 55 and 20Hz to tame exaggerated low frequencies that can sometimes be heard when sitting too close to the wall. 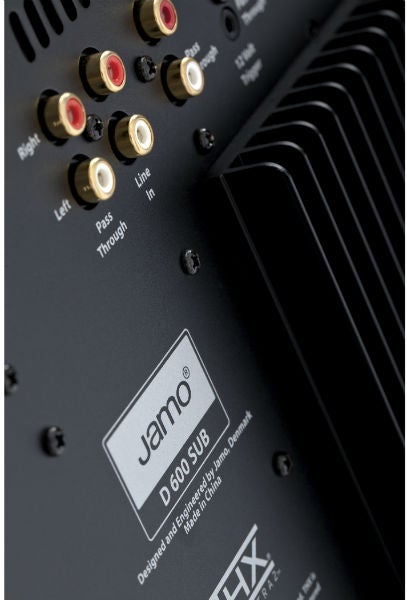 The control panels on the subwoofers allows you to switch between the Default and THX presets, with a third Personal setting allowing you to set your own parameters. On their rear panels are stereo line input, LFE input a 12V trigger input, all with accompanying passthrough outputs. Each sub packs a 600W amplifier and a 15in driver, and their frequency response is quoted as 20Hz-20kHz.

Performance
But no amount of gazing at the specs can prepare you for the  Jamo D 600’s monumental performance. The levels of raw power and dynamism it musters is staggering, bringing you as close to the experience of a real cinema as possible, but it’s coupled with exquisite detail reproduction and a level of clarity that keeps you hooked. 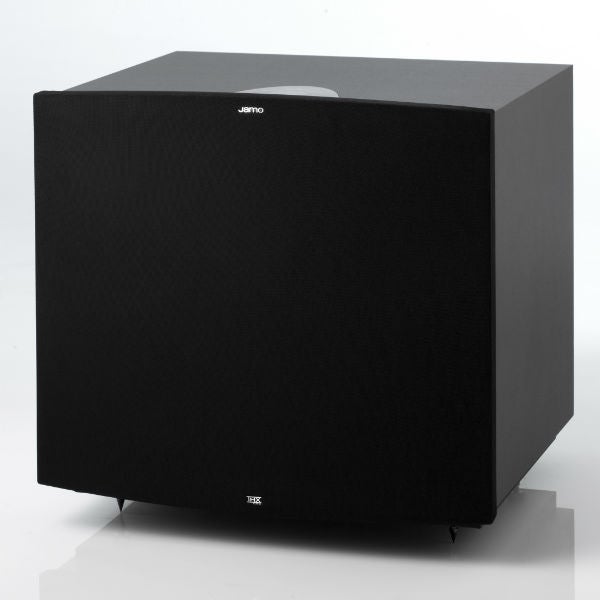 Play a fast and furious movie scene like the train crash in Super 8, or the Yodenheim battle from Thor, and the D 600 is in its element. As the train carriages smash into each other in the former scene, rock solid bass floods into every corner of the room as the sound of colliding metal slams through your chest, while the latter’s mixture of stomping Frost Giants, shattering rocks and giant monsters is an awe-inspiring assault on the senses.

The 5.1 soundstage is wide and tall, wrapping you up in a seamless cocoon of sound. The tonal consistency between every speaker, coupled with the smoothly diffused sound from those dipole rears, results in a beautifully immersive experience, but key effects are still placed accurately within the stage. 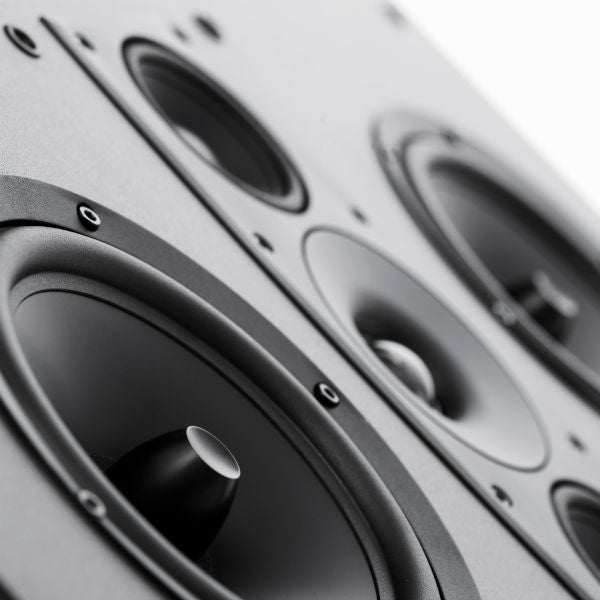 What really pushes the D 600 to the next level – and perhaps the most obvious reason why it trumps Crystal Acoustics’ cheaper THX Ultra 2 system – is how lucid everything sounds. The finest high frequency details are crystal clear, lending openness and texture to the overall sound. That pays dividends when watching an eerie, atmospheric scene, as the Jamo easily teases out those little noises that send shivers up the spine – but when the pay-off comes it slams back to action in the blink of an eye.

More evidence of the Jamo’s superb detail handling comes in the aftermath of Super 8’s crash, as the crackling fires and gently crunching footsteps punctuate the silence. And when it comes to dialogue, the centre speaker articulates vocal nuances brilliantly, projecting words with focus and immediacy. 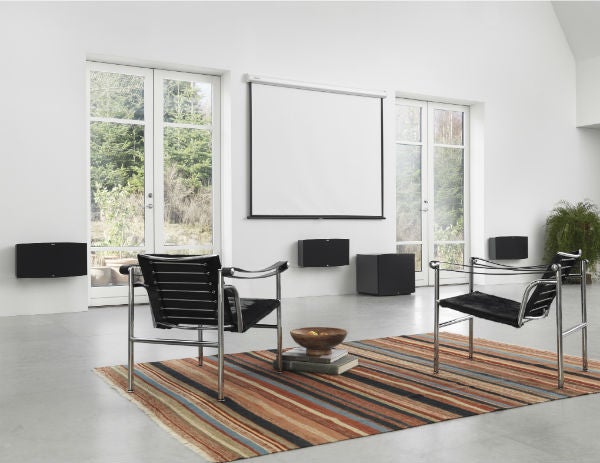 We’d suggest you might want to invest in a bigger projector screen than this to make the most of the Jamo D 600.

Given the D 600’s movie-focused spec, it’s perhaps inevitable that it’s not quite as assured or focused with music. The D 600 LCR’s naturally open and detailed character does result in an enjoyably refined sound, yet the subs’ involvement feels a bit heavy handed and if you turn them off the satellites don’t have the same low-end authority as similarly priced hi-fi speakers.

Verdict
If you’re looking for a speaker system that’ll blow the roof off your cinema room, look no further than the Jamo D 600. It’s an astounding performer with movie soundtracks, offering brutal strength, lucid detail and an enveloping 360-degree soundstage.

The inclusion of two subwoofers brings outstanding punch and slam in the low frequencies, but what sets it apart from cheaper THX systems is its ability to mix this immense power with supreme detail clarity and immaculate imaging.

Most surprising though is that this system won’t take up as much room as you think. Jamo’s compact cuboids can be wall mounted thanks to their relatively shallow depth, made possible by having two subs on bass duties. The industrial grey styling might not appeal to all tastes but that aside this is a truly staggering system that die hard movie lovers will consider a sound investment.