With the A 101 HCS 5, Jamo is out to prove that installing a decent cinema system in your living room needn’t be expensive or intrusive. For just £300, you get a 5.1 system with five incredibly small satellites that can be dotted around the room almost invisibly, while a larger but wall-mountable subwoofer provides the low-end oomph. We know Jamo is capable of great sound quality – its superb D500 system told us that much – but we’re eager to find out how the Danish company has adapted its sonic skills to suit the inevitable limitations of super-compact speakers like these.

First though let’s marvel at the design of the A 101 satellites, which measure just 91(w) x 145(h) x 51(d)mm. They’re all identically styled in a gloss black lacquer finish (also available in white), while the curved front and back sections exude an elegance and individuality rare among speakers of this size. Their compact dimensions make them suitable for wall mounting around a flatpanel TV, as their 51mm depth means they won’t stick out any further than your set. 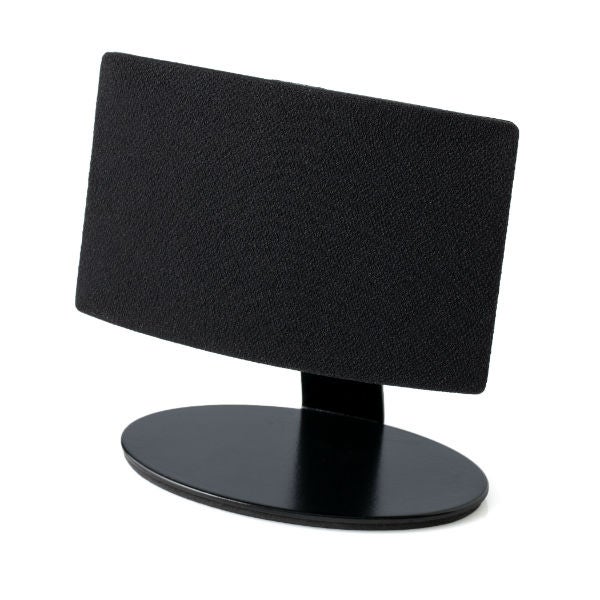 At first glance you could be forgiven for thinking they look like the sort of speakers you get with a cheap one-box Blu-ray system, but that’s shattered when you pick one up – their weighty, solid construction is much better than the price tag suggests, although some may take issue with the springclip speaker terminals on the back. 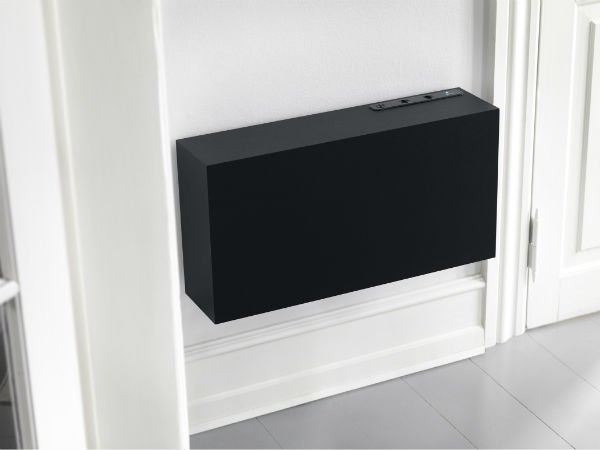 The subwoofer (A 101 SUB) is unlike any we’ve seen before, using an innovative design that allows for wall or floor installation. This rectangular black box measures just 160mm deep, which means it could quite feasibly be slid under the sofa on its back, but you can also lay it upright on its bottom edge depending on the space you have available. This clever design offers a level of flexibility missing from most subs.

There isn’t a great deal of technical detail to go into here – these are small, simple speakers that use a newly-developed 76mm full-range driver to deliver those mids and highs, with a frequency range of 170Hz – 20kHz. Their power handling capability is quoted as 70W with a sensitivity of 85dB. 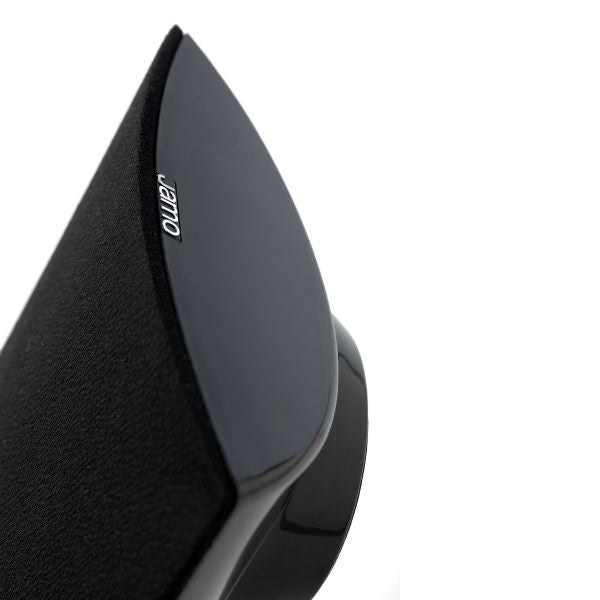 The subwoofer features twin 203mm drivers – one active, one passive – and a 200W amplifier, which on paper seems far more powerful than you’d expect at this price. It handles frequencies from 40Hz up to 200Hz, providing an ideal crossover with the satellites. The bass cut-off point can be adjusted using a dial on the top of the subwoofer. Also on the sub’s control panel are dials that control volume and phase. 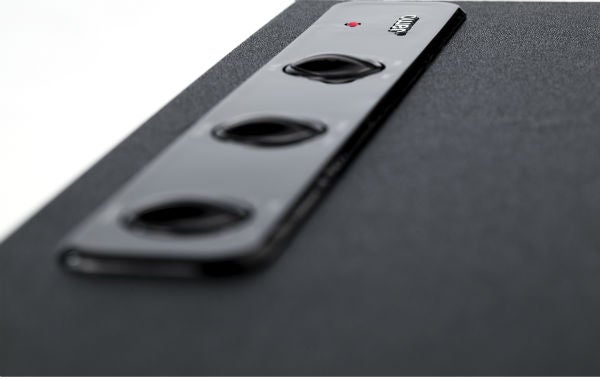 The satellites are designed for wall or table-top mounting and either way installation is simple, which is a real godsend if your patience is less than saintly. On the back of each speaker is a cross-shaped recess that lets you hang it on a screw fixed into the wall, or slot it easily onto the supplied metal stand. In both cases you can position them horizontally or vertically. 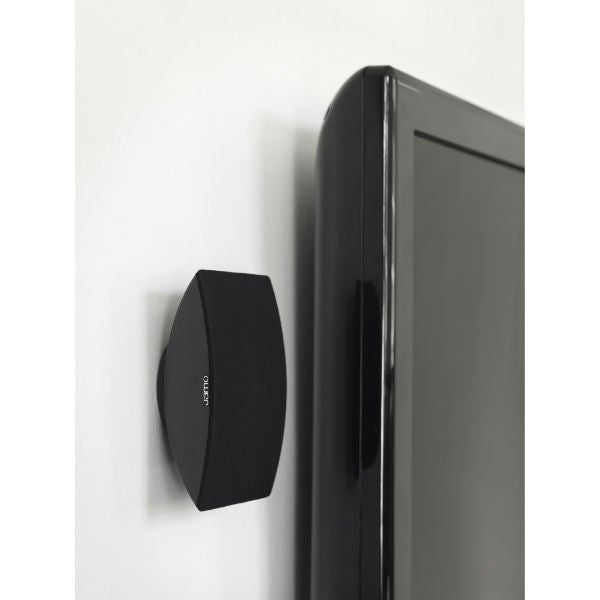 As for the sub, you don’t have to be Handy Andy (or a more contemporary TV DIY expert) to install it on the wall – if you know how to drill a hole, push in a Rawlplug and screw in a screw, then you’re pretty much set. There are four ‘hooks’ on the back that allow you to hang the sub on the screws. Also on the back of the sub are stereo phono inputs for hooking it up to your receiver.

In action the A 101 HCS 5 is an absolute revelation. We approached the system with a certain level of trepidation given the bargain basement price and the size of the satellites, but the Jamo confounds all expectations with a thrilling, detailed and surprisingly smooth performance. We started with our trusty Avatar Blu-ray disc, and after hearing the assurance and maturity with which it handles the epic action scenes we couldn’t quite believe that this is only a £300 system. 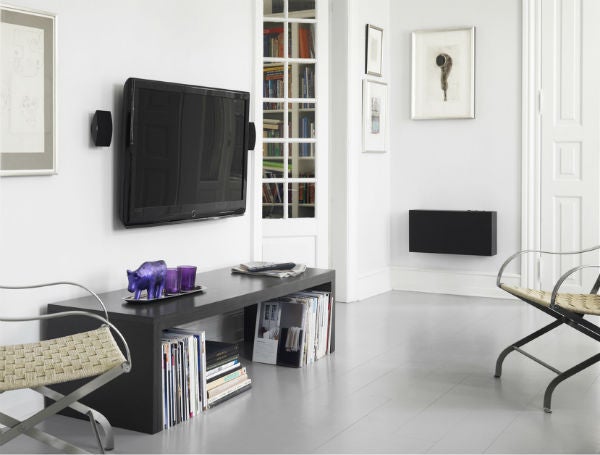 Take the ‘Battle for Pandora’ sequence for instance. Despite its diminutive size, this system has an acute understanding of how to convey drama and scale, with thumping helicopter blades, flapping banshee wings and roaring engines sounding absolutely huge. James Horner’s score also boasts urgency and drive, plus the breathtaking flurry of machine guns, zooming missiles and crunching trees are crisp and forceful without giving you cause to reach for the volume dial.

The ‘Banshee Rookery’ scene is equally spellbinding. The soaring strings and choral voices as the Na’vi take flight sound rich and mellifluous, while the creatures’ screeching is suitably prominent yet easy on the ear – some speakers at this price make them sound harsh and abrasive. 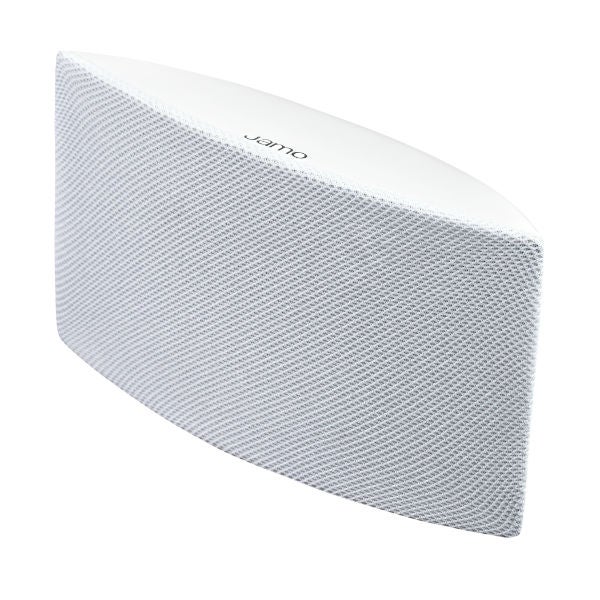 Flipping to some of the movie’s less adrenalin-fuelled scenes, we find the Jamo is able to handle subtle detail with admirable eloquence. As Jake and Neytiri escape into the forest to, er, consummate their partnership, the gentle chirping and fluttering of the surrounding insects, running water and whispering voices of the ancestors are clearly audible and drift around the soundstage beautifully. It’s not the last word in detail reproduction, but certainly digs deeper than a £300 system has any right to.

Dialogue is also smooth and forthright, making it easy to hear no matter how frenzied the action. It’s all topped off by a superb performance from the A 101 SUB, which delivers tight, agile bass that doesn’t overpower the satellites. In fact the sats and sub are a match made in heaven, boasting fluid integration and a seamless crossover. It moves some serious air, pounding out bass effects with gusto. 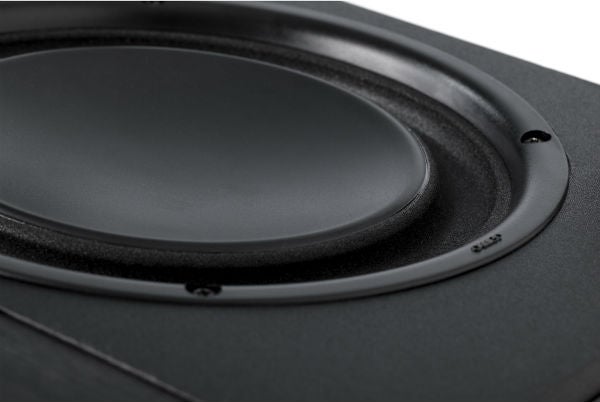 Next we tried out some music and were greatly impressed. A clip of Dave Matthews and Tim Reynolds: Live at Radio City Music Hall in Dolby True HD is a treat, with crisp and sparky guitars and smooth voices. A little more detail, depth and transparency would have taken it to the next level, but that would be straying into floorstander territory – as compact systems go, it’s an absolute belter.


If you thought that being on a sub-£500 budget for your speakers meant you had to greatly compromise on sound quality then think again. The Jamo A 101 HCS 5 is proof that you can get exciting, dynamic and detailed sound without having to clutter up your room with massive floorstanders and van-sized subs – the only compact system we’ve heard in this price class that comes close is the Tannoy HTS-101. Not only has it impressed us with its price and performance, but it also comes with an innovative, space-saving sub, plus those dinky, wall-mountable satellites are sure to go down well with those who like their speakers to be heard but not seen. Impressive.