What are the Jabra Elite Sport?

Jabra has now entered the truly wireless earbud market market with its Elite Sport earphones. However, not content with ditching wires altogether (each bud is an independent unit with no cables connecting them), Jabra has also added a heart rate monitor (HRM), a feature borrowed from its Sport Pulse headphones and a first for truly wireless earbuds.

The likes of Bragi, Samsung and Motorola have all released their own attempts recently, so Jabra has some tough competition. These are first and foremost workout earphones, so don’t expect to wear them all day, every day.

The buds are reasonably large but they don’t stick out of your ears too much. There’s a primary earbud that houses the HRM and multi-function controls to answer or reject calls/play or pause music, and a shortcut to the Jabra Sport Life app that can also be pressed during a workout for status updates. The secondary earbud houses controls for adjusting the volume and skipping tracks.

You’re able to use the primary earbud by itself for times when you want to be able to hear out of your other ear or just want a simple hands-free earpiece. Music plays back in mono in this instance so you don’t have to worry about missing out on half the experience. 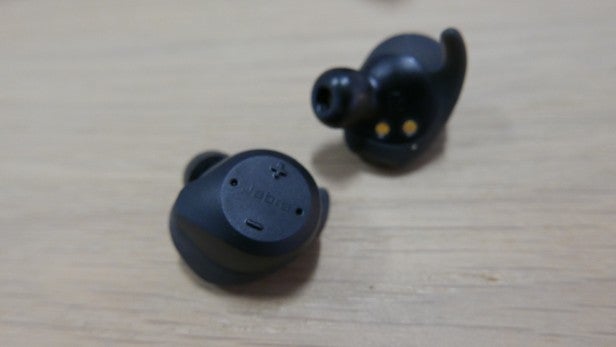 The two earbuds communicate with one another through near field magnetic induction, and the secondary earbud turns on automatically when within range of the primary earbud. The primary earbud connects to your smartphone through Bluetooth.

Comfort is always critical when it comes to any headphones geared towards fitness, wireless or not, and the Jabra Elite Sport checks all the right boxes. They come with an array of silicone and foam tips and wingtips for a secure fit.

The silicone tips don’t provide as much isolation, so might be a better choice for when road-running for better situational awareness. On the other hand, the foam tips block out far more external noise, which is great if you’re training in a noisy gym environment. 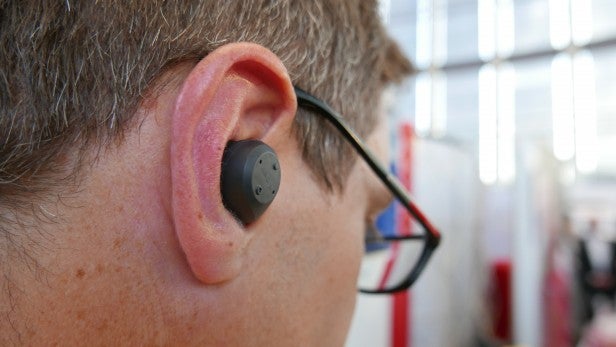 There’s also a useful ‘HearThrough’ mode which uses the microphone array to allow ambient noise in. You can either configure this to pause your music and only let external noise in, or allow external noise in over your music. This is also a convenient means to have a conversation without having to remove the earbuds, although the social implications of this are down to you to deal with.

There are three different size wing tips. For me, the medium size worked best. With the earbuds inserted, I was never concerned that they would come loose. I wore these for both running and gym training and they survived the rhythmic bouncing of running as well as more explosive Olympic lifting. 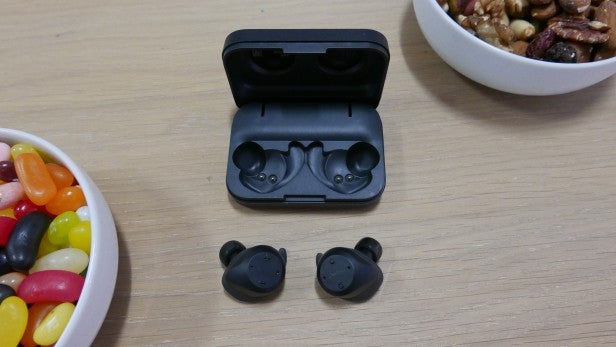 As you would expect the headphones are water-resistant to IP67 rating so they’ll handle sweat without fuss. They can even take a dip in 1m of water up to 30 minutes. However, you should note that this rating is more to show how far they’ve been tested rather than a recommended use scenario.

Jabra has a great track record with its Jabra Sport Life app, which has been used across all of its previous sports headphones. But when used with the Elite Sport, you open up some new features that haven’t been seen before.

For runners, you can automatically track your VO2 max like with the Sport Pulse by taking 15-minute tests where you run in a specific heart rate zone. At the end you’re given a VO2 max score (indicating how much oxygen you’re able to use during intense exercise). These are a great way to monitor your progress over time. 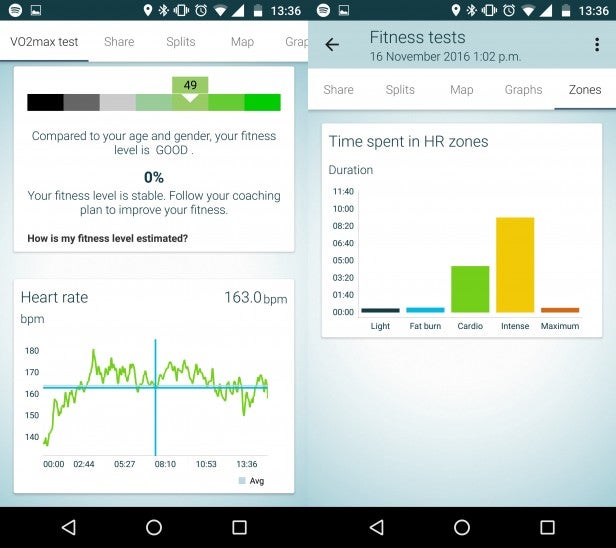 Where previously the Fitbit Charge 2 had told me I was in the ‘Excellent’ category, with a score of 60, I only managed ‘Good’ according to the Elite Sport, with a score of 49. Whether or not the scores recorded on different devices match up isn’t super-important provided readings taken on the same device are consistent. I took three separate VO2 max tests and they gave the same score each time.

My training focus has been more on strength training since I tested the Charge 2, so I’m not that surprised my cardio fitness has dropped off due to some mild neglect. All the more motivation to sort myself out.

There are other tests that take advantage of the heart rate sensor, such as resting heart rate tests and the Cooper test, that sees you run as far as you can in 12 minutes. This then gives you a score based on your body’s endurance levels. 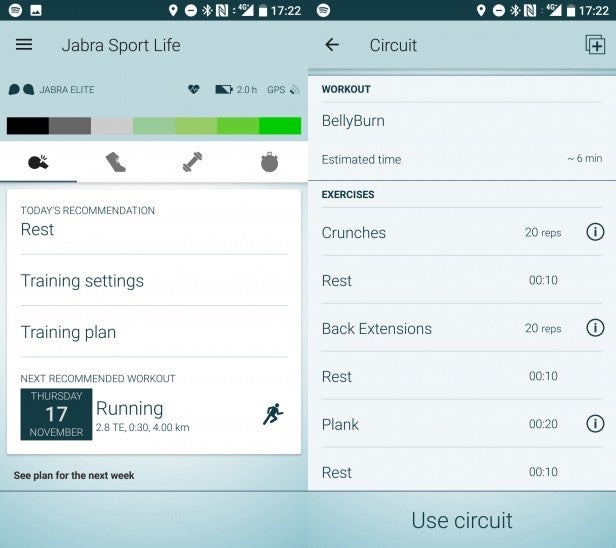 Of course, if you simply want to run you can do that as well, with the Sport Life app mapping your run using your phone’s GPS. You can also conduct interval-based runs, or target specific heart rate zones or pace. You can also choose from other activities such as cycling, walking, hiking and even skiing and skating.

Special to the Elite Sport are pace estimations. Using your personalised fitness level you can get an estimated pace for standard race distances such as 10K, half marathon and marathons. You also get recovery recommendations, too, as part of a training plan.

Beyond the more standard sports tracking, you’re able to jump into custom cross-training workouts that comprise both bodyweight and equipment-based workouts. You can choose from circuits with names like CardiCore, BellyBurn, UpperBodyPump and YouVsBarbell. These are great fun to do and a welcome respite from pounding the pavement. It’s just a shame there’s no automatic rep-counting like seen in the Jabra Sport Coach Special Edition. 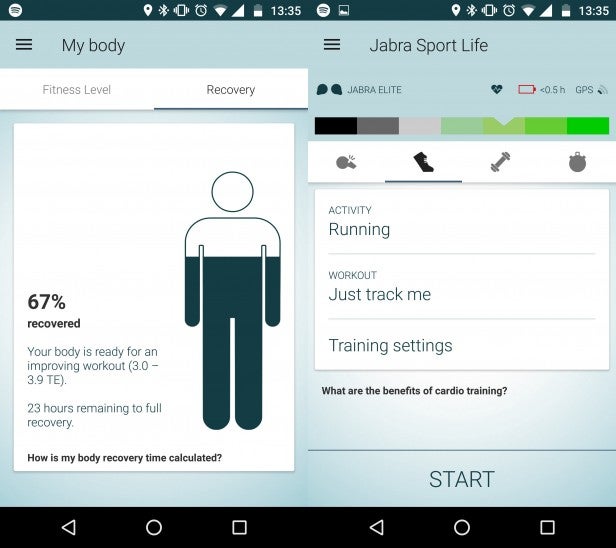 As far as fitness apps go, the Sport Life app compares favourably against dedicated running apps. You don’t have to use the Sport Life to track your workouts, though. The Elite Sport’s heart rate monitor will integrate happily with other apps, such as Strava, if you prefer those and simply want the heart rate data delivered from the headphones. Having the choice is great.

As for the accuracy of the heart rate monitor in the Elite Sport, it proved as accurate as the Wahoo Fitness Tickr X chest-based monitor I wore at the same time. Resting heart rate was almost right on the money, save for a few deviations of one or two BPM. Steady-state running kept pace, as well. It only began to struggle to keep up during more sprint-based training, where the faster sampling of the Tickr X left it behind.

I was genuinely pleasantly surprised by the sound quality of the Elite Sport. There’s surprising warmth and richness to it, with tightly controlled bass. A lot of sports headphones I’ve worn over the years either go all out on the bass, neglecting everything else, or tune towards bright treble.

There’s a nice balance here. It means hip hop has the energy in the low end it deserves, especially when you’re trying to get energised and hyped up in the gym. Whereas some tranquil, meditative classical music has some respectful delicacy when you’re running and just wanting to zone out. 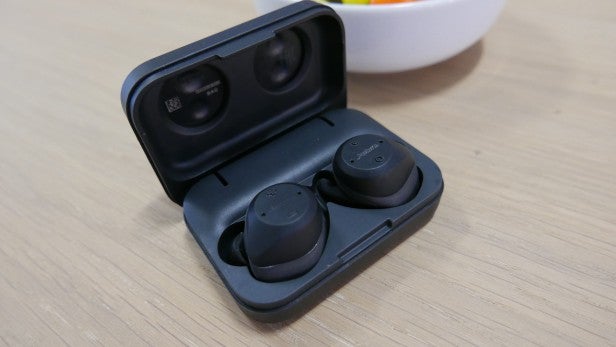 There are some little oddities worth mentioning, more in regards to truly wireless earbud tech, than sound quality. There’s the occasional delay where you’ll first hear music from the primary bud, with the secondary bud only triggering a split second after once it wakes up. This is usually the case when you’ve not had any sound coming out of the earbuds and they both need to wake up.

Perhaps unsurprising, considering Jabra’s Bluetooth headset heritage, but hands-free calling was exceptional. Even though the earbuds are so diminutive, they were able to pick up my voice with surprising clarity, whether I was using just one or both of them. Inside each earbud are two microphones, one for your voice and one to capture ambient noise for noise cancellation during calls. The earbuds will dynamically swap to whichever set of microphones will provide the best call quality, too.

Battery life is always a sticking point with properly wireless headphones and it’s not great again here. Battery life is rated at just 3 hours. Fortunately, a charging case is included and this will provide another six hours of playback through two more charges.

The case charges through Micro USB and you just need to drop the headphones in and they’ll get topped up through inductive charging. The headphones automatically turn on and off as they’re taken out and returned to the case, which is a neat touch.

There’s rapid charging, too. Just 15 minutes of charge will net you another hour of use. 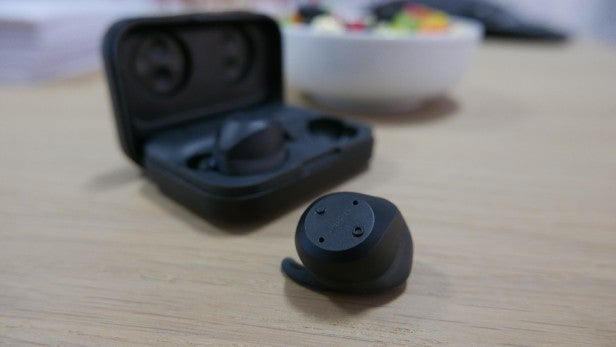 The charging case itself is well made and ensure your earbuds are protected and not prone to being misplaced. It’s not overly big, either. Having said that, I would have happily taken a larger charging case if that meant it could charge the headphones more than twice. Perhaps not as big as the Sol Republic Amps Air, which can charge a staggering 15 times, but a fraction bigger would not have gone amiss.

Should I buy the Jabra Elite Sport? 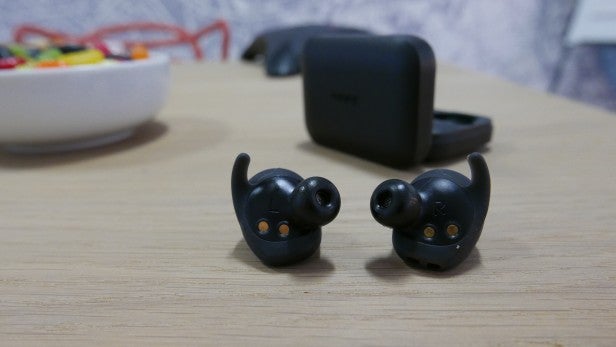 In living up to their name, the Elite Sport are the most advanced sports headphones Jabra has ever released. The Elite Sport take some of the best parts of Jabra’s previous headphones and put them in a liberating, truly wireless form factor.

There are some sticking points, such as so-so battery life, but the case does go some way to alleviating this, if only with a couple of extra charges. If you’re only after a pair of headphones for exercising, 3 hours is going to cover most scenarios.

The Jabra Sport Life app is a great addition, and the VO2 calculations, pace predictor and training plans are all really useful insights that can help improve your training.

At £230, the Elite Sport is undoubtedly a big investment, coming in more expensive than many other admittedly less feature-packed truly wireless rivals. So unless you absolutely need some of the new additions, and of course that super convenient form factor, you might be better looking at Jabra’s Sport Pulse, which can now be found for around a £100.