During our fitness technology product tests we see many other runners holding their phones in a hand or strapped to an arm while they listen to music. There are many sport headphones on the market, but wireless Bluetooth sets have been aimed largely at business users and those willing to spend a fair bit.

Jabra has taken its background in headset technology and produced a hardwearing, comfortable pair of Bluetooth earphones that allow you to listen to your music wirelessly take calls should anyone interrupt your workout. 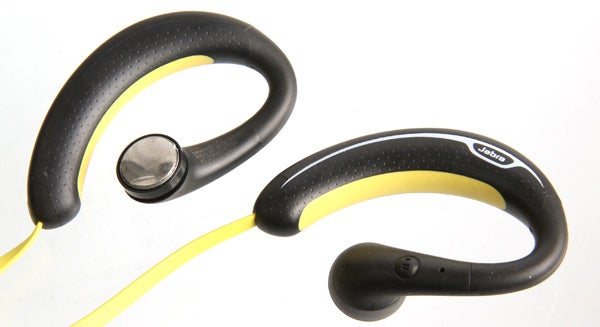 The Jabra Sport stereo headset, finished in black with reflective detailing, sits snugly over the top of each ear, the buds resting by the ear canal opening. We like this approach, as noise isolating in-ear headphones that block out the sound of traffic can lead to terrifying results. Running in front of an articulated lorry – never a good idea. In addition, while in-ear monitors produce a secure fit, they amplify footfalls and can lead to your ear canals filling with sweat, producing a nasty sloshing noise for the listener.

The Jabra Sport avoids these ill-effects, yet fit comfortably. They earpieces are relatively discreet too, with playback controls and the microphone on the back of an earpiece. The right one features volume controls that double up as forward and back track buttons when held for longer than a second. There is also an FM button that switches the headset into radio mode, transforming the track buttons into search controls to jump between stations. There is a pause button too, which when held turns the headset off and on.

The buttons on the earpiece are both weatherproof and well positioned on the back, and are different shapes, letting the runner identify them without resorting to trial and error prods. Buttons are covered in the same silicon layer that coats the earpiece, which means you can rinse them off without worrying about water getting under the switches and into the electronics. Finally, there is a micro USB socket under a flap, through which you can charge the headset. The Jabra Sport headet provides three hours of music playback.

Size, weight and durability are prime factors in all sport headphones
and the Jabra Sport headset weighs a mere 25g, and the earpieces are unobtrusive yet secure on the ears. The also put up
with the rigours of sweat, rain and wind without bouncing around.

The two earpieces are joined by a flat tangle-resistant cable. We would have preferred a fabric cord, but the rubberised wire has enough rigidity to keep the cord off the wearer’s neck, and is the perfect length to avoid flapping around and getting caught on a collar while allowing one ear to be taken off without garrotting the wearer.

Sound-wise, how do they fare? In truth, they are good but not outstanding. At higher volumes, there is some buzz in the upper registers, with high hats sounding slightly fizzy. Middle tones like guitar and vocals are clear and bass is faithful if not punchy. This can be improved by ensuring a more snug fit by switching one of the three included earbud accessories, but the buds sit on the ear, not in them, so there’s likely to be some compromises not tolerated by IEM fans. 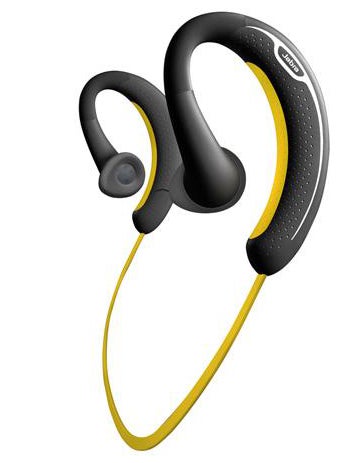 As well working as a standard Bluetooth headset for taking phone calls,
the headset can also be used for listening to coaching instructions
and progress reports delivered by a favourite fitness app.

The call quality is not up to the standard of other headsets such as the Jabra Supreme due to the positioning of the microphone behind the ear, and radio reception was fairly poor during our test. Admittedly we were surrounded by buildings, but we would expect to find a decent signal in London.

Let’s lay our cards on the table. The Jabra Sport will not appeal to audiophiles, who can enjoy the rich tones offered by the likes of the Bowers and Wilkins and Sennheiser. And for £250 that’s their privilege.

But for a fraction of the price, runners who are used to cables will appreciate a newfound freedom with this headset while they listen to a perfectly decent rendition of their high-energy playlist without, thankfully, blocking out the world.

The Jabra Sport headset frees runners from the shackles of wires while making a few compromises in the attempt. It’s an impressive product as a standalone item that falls short when compared to dedicated sport headphones or standalone bluetooth headsets. As a combination handsfree sport headset, however, it does a great job.