While built-in Bluetooth is becoming increasingly common on posh motors, it’s sadly still far from becoming standard on all new cars. With the ban on mobile use while driving in force in the UK, there are only two real options for those who need to make and receive calls while driving: either go for a Bluetooth headset, or instead opt for a Bluetooth speaker hands-free device.


If you choose the latter route then Jabra’s SP700 Speakerphone might be of interest because it’s got lots of tempting features, not least of which is the built-in FM transmitter that enables you to route calls through your car stereo. 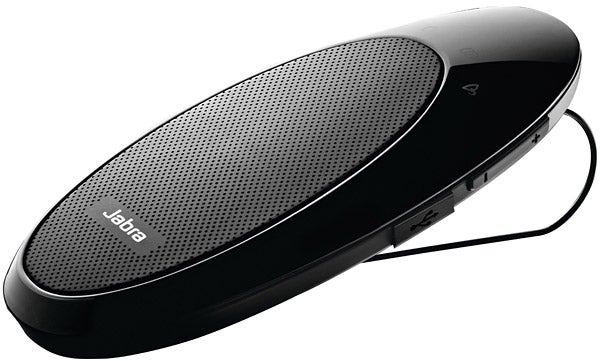 The SP700 is small and light and designed to clip on to the driver side sun visor in your car via a sturdy metallic clip on the rear. Because the unit is very slim at a mere 17mm, it’s pretty inconspicuous once it’s in place and the clip does hold the unit firmly in place so it doesn’t move or rattle around while you drive. This clip handily also doubles as a stand when you want to use the SP700 at home or in the office.


Jabra has kept the controls to a minimum, which is sensible for something that’s designed to be used while driving. The top of the device actually acts as one big push button. To turn on the SP700 you press and hold it for two seconds; to answer a call or hang up you tap it once, and to turn it off you press and hold the button down for four seconds. It’s all pretty straightforward stuff. 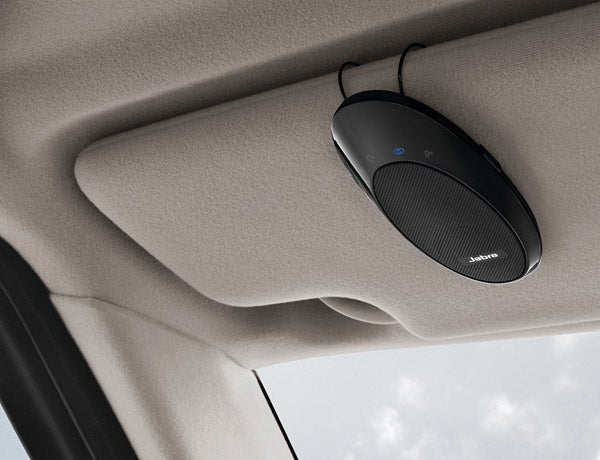 As well as the main button, there’s also a volume rocker switch on the right and a button to activate the FM transmitter on the left, but more on that later.


Pairing the device with your phone is very easy to do. To activate pairing mode you just press and hold the main button for five seconds, do a search for it on your phone and then enter the standard ‘0000′ Bluetooth PIN code. The speakerphone can store pairing information for up to eight different devices at any one time so you don’t have to pair and re-pair handsets if the unit is going to be used by different people – in a family car, for example.


Four lights on the front give you an indication of the SP700’s status at any particular time. For example, there’s one to show you when it’s connected to a handset, one to indicate when a call is active and another lights up when the battery needs recharging. These lights can also be dimmed down by using the Night Mode so they don’t distract you when you’re driving at night, although to find out how to do this we had to download the full manual from the websites as it’s not covered in the quick start guide that’s include in the box.

The use of the SP700 is made all the easier by the fact that it gives vocal feedback. So when a link has been established with a handset the nice lady hiding inside says ‘connected’ and when you receive an incoming call she says ‘call from’ and then speaks the digits of the caller’s number. However, the SP700 doesn’t have a text-to-speech engine like the Parrot Minikit Slim so it can’t actually speak the name of the caller, which would have been a more elegant solution. 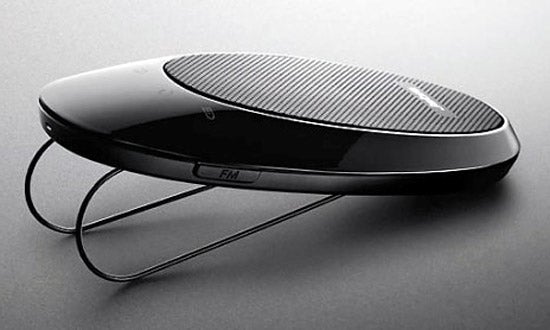 However, the SP700 does trump Parrot’s model with its best feature – the built-in FM transmitter. Not only does this enable you to route calls through your car stereo, but if your phone supports A2DP you can also route music from the phone through the SP700 and on to your car stereo. Both of these functions work extremely well, but it’s especially good for taking calls as even though the SP700’s built-in speaker is impressively loud – and much louder and clearer than the flat NXT speakers used on rivals like the Parrot Minikit – audio from your car’s speakers is always going to be louder and crisper sounding.


To activate the FM tuner all you have to do is hit the button on the right of the speakerphone. The speakerphone then announces the frequency that it is transmitting on so you know which frequency to tune to with your car radio. If that frequency is being used by a radio station you can have the SP700 do an automatic scan for a free frequency and then adjust the setting in steps of 0.1MHz to fine-tune it.

The full-duplex sound quality during calls was very good. Callers sound very crisp and clear through both the internal speaker and when the unit is feeding sound to your car’s radio via the FM transmitter. Those people who we called said that although it was obvious we were using a hands-free device, as the echo cancellation would clip the quality of sentences every now and again, the voice quality was still very intelligible because there was practically no background engine noise audible on the call.


Obviously, an internal rechargeable battery powers the SP700. Charging is carried out via a microUSB port on the left-hand side of the device and Jabra includes a car charger in the pack. Battery life was good and similar to what you’d expect from a standard Bluetooth headset. In fact, Jabra quotes a talk-time of 14 hours when using the FM transmitter, but we got around 12, which isn’t far off.


We really liked the SP700. It has decent sound quality, good battery life and the built-in FM transmitter is a really clever and useful addition. The only thing it’s missing is a text-to-speech feature for dictating the actual names of callers. Other than that, this really is a top-class device.