Talking on your mobile while driving is not just dangerous, it has also been against the law in the UK since 2003. If you need to keep in contact while zooming around in your motor there are two main options: get a headset and look like a member of the Borg, or opt for a portable speakerphone. The second is probably the less fiddly option as they are generally designed solely to be used in a car and so feature larger buttons and controls. 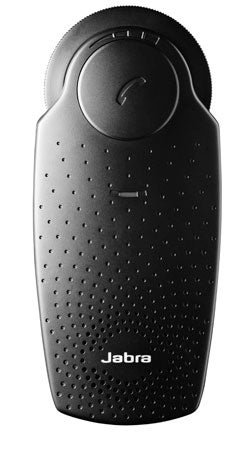 We reviewed Jabra’s excellent SP700 speakerphone back in February and loved not only its call quality and slick design, but also its built-in FM transmitter that let you listen to callers via your car stereo’s speakers or stream music from your mobile. However, that device was relatively expensive and not everyone needs all those extra features. This is one of the reasons why Jabra has decided to release a cut down version called the SP200 – a sort of speakerphone kit for the credit crunch generation.


The overall design of the SP200 is similar to that of the SP700 in many ways, but it also differs in a number of significant areas. Both sport curvaceous styling and both are designed to clip on to your car’s sun visor. However, the plastic finish on this new model is a duller and cheaper looking matte black, rather than the glossy finish of the more expensive SP700. Also, instead of the whole front of the device acting as the call answer button, the SP200 has a large push button mounted towards the front. The volume control has also been moved, but much improved in our opinion. Rather than being a tricky to get at rocker switch it’s now a very large wheel mounted horizontally on the front of the device. The sheer size of the thing makes it very easy to spin left or right to adjust the volume of the speaker while on a call.

The only other button on the SP200 is an on/off switch nestled on the right hand side of the speaker phone that can be used to completely power it down, although it’s worth bearing in mind that the speakerphone will automatically turn itself off if it’s left idle for 15 minutes (a quick tap of the call answer buttons starts it up again). Measuring 12.4 x 5.6 x 2.4cm the device is slightly longer and thicker than its predecessor, but not by much.


Pairing the speakerphone with your handset is very straight forward as it automatically enters pairing mode the first time it is switched on. This means that to get both devices talking to each other it’s simply a case of starting a pairing search on your mobile and entering the standard ‘0000′ Bluetooth passcode. If you need to pair the speakerphone with another mobile at a later date you can force it into pairing mode again by simply holding down the call/answer button for around five seconds until the LED at the top of the device starts to flash blue. 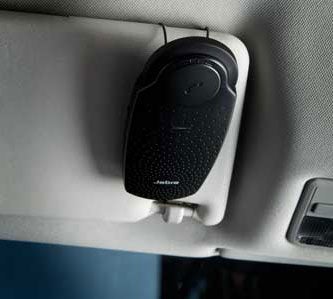 
The speakerphone has built-in echo cancelation which you would expect, but it also has onboard noise reduction. This works rather well with callers reporting that it cut out a lot of background engine and road noise. They said that although it still sounded like we were using a speakerphone, apart from the odd bit of clipped speech from over eager noise reduction, the voice quality was very clear and distinct.

On the other end of the line we found that the built-in speaker was impressively loud with enough volume to be comfortably heard above engine noise and road noise. That said, when the speaker is working at it’s loudest volume setting it does become a little screechy as a bit of distortion and clipping creeps in. Nevertheless, on all but this highest setting voices via the speaker sound nicely distinct so on the whole it is easy to understand what callers are saying. 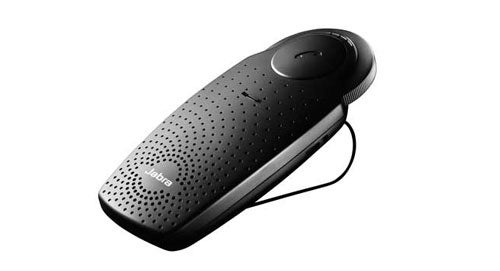 In the box Jabra supplies a USB car adaptor and lead for charging the speakerphone via its microUSB port. Unfortunately there’s no wall charger included, so if you want to be able to charge it outside of your car you’ll have to hook it up to one of the USB ports on your PC or laptop. This is not exactly an unlikely scenario as the device works great as an office based speaker phone for you mobile when you’re out of your motor. During charging a small LED on the top turns red and once it’s fully charge this switches to green to let you know it’s ready for use. Once it’s fully charged Jabra says that the battery is good for 10 hours of talk time or around 23 days on standby. In our tests it didn’t perform far off of those figures. We got around eight and a half to nine hours of use out of it before it needed to be topped up with juice.


It may look a little bit plasticy, but the SP200 is easy to use thanks to its large volume dial and simple control set up. Add clean and crisp call quality into the equation and you’ve got an impressive budget speakerphone option. Its older brother, the SP700 is still the more impressive device, but if you can’t quite stretch to its higher asking price then the SP200 is still a good second choice.