What is the Jabra Solemate Mini?

The Jabra Solemate Mini is the smaller Bluetooth speaker sibling of the Jabra Solemate dropping down to the size of a Coke can. The £80 Mini is £70 cheaper than the Jawbone Jambox Mini and is a powerful little performer. But ultimately, like so many ‘ultra-portable’ speakers, loud doesn’t always mean good and it’s a shame because this is almost a great Bluetooth speaker. 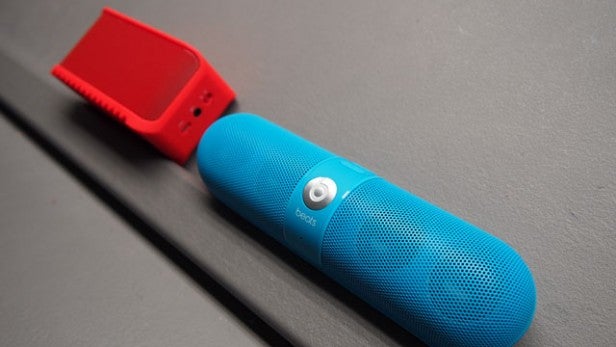 The Jawbone Jambox is responsible for the current flood of portable Bluetooth speakers and the Jabra Solemate Mini mimics the stylish, colourful design of the Jambox in so many ways.

If you’ve seen the original Jabra Solemate, the same design principles apply here. It still has the trainer-inspired look with grooved sole to prevent bass vibration from distorting sound. The 3.5mm audio cable is neatly packed away underneath and two grilled front-facing speakers with soft touch rubber give it that durable, robust feel. It’s water and dust-resistant so you can take it out and about and be safe in the knowledge a little splash of water won’t put it out of action.

You still have the three chunky buttons on top that are now moulded into the body and can control volume and activate the speakerphone. On one side of the speaker there’s the on/off switch, 3.5mm aux port and micro USB charging port. The little material carry handle is gone, replaced with a new NFC spot where you can tap compatible smartphones and tablets as an alternative way to wirelessly stream music.

The first Solemate is portable, and now the Solemate Mini makes things even smaller. It weighs 295g, significantly lighter than the original Solemate (610g) and only slightly heavier than the Jambox Mini (255g). It’s shorter and thinner than the bigger Solemate and is about half the size of the Beats Pill. The Solemate Mini is too bulky to slip away into a pocket, so you’ll still need to make room in a bag to carry it around.

The Solemate Mini connects wirelessly over Bluetooth 3.0 and now adds NFC. It’s a little disappointing not to see Bluetooth 4.0 supported like it is with the Jambox Mini. Bluetooth 4.0 is more energy efficient and can improve battery life, especially for a speaker where streaming music can put considerable strain on its staying power.

Jabra claims you should expect to get around 8 hours of music streaming or speakerphone action, which is actually two hours less than the bigger Solemate and the Jambox Mini. It’s more than capable of making it to eight hours before the voice prompts let you know that the Solemate needs charging. 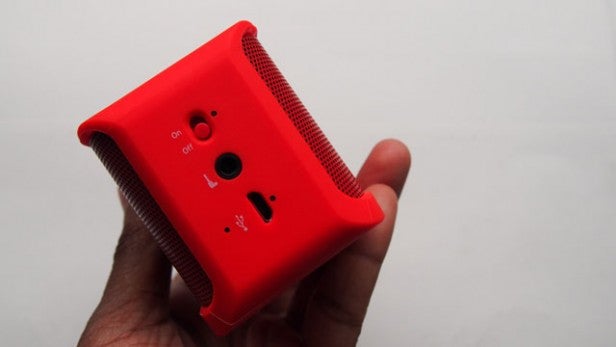 The voice prompts can be a little on the loud side so if you want to turn them off you can hold down the volume up button when you first turn on the speaker and wait until you hear ‘voice guidance off’.

Getting connected over Bluetooth and NFC poses no problems whatsoever. The way in which you sync Bluetooth has changed slightly and now requires holding down the answer/end button on top of the speaker to sync the speaker with a compatible device, but it’s easy all the same.

The Jabra Solemate Mini fits two full-range speakers instead of the three in the original with a single bass radiator. The bass radiator is a big deal for portable speakers like the Mini to ensure the power in the speakers combine to create a warmer, more rounded sound.

Undeniably it’s all about bass here and the Mini delivers on its promise to pump out big, loud sound to fill a decent sized room. It’s when you get up to top volume or even medium volume that the overemphasis on power impacts on the clarity.

For watching movies, TV programmes and using the speakerphone, dialogue is clear and detailed and the speaker is more than suitable. The moment the bass radiator is in greater demand it can rattle like an oversized speaker system inside a 16-year old racer boy’s Vauxhall Nova. Listening at lower volumes is a more enjoyable experience on the ears, but it doesn’t take long for things to quickly go downhill.

Jabra also adds support for a Dolby Digital Plus app for Android and iOS devices that requires an unlock code available in the box to activate it. The aim is to create a richer sound with a standard graphic equalizer to customize elements like the treble and bass. It has its noticeable benefits if you are streaming from a phone, but not so much if you are streaming from something else. 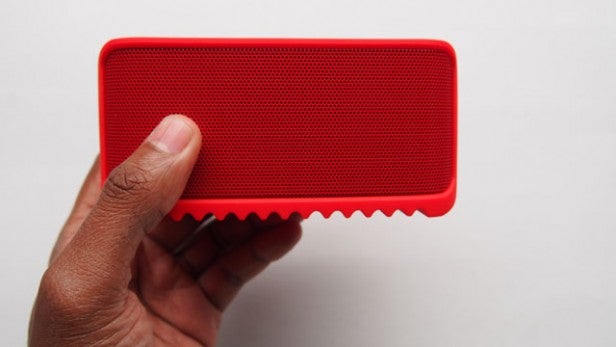 Should I buy the Jabra Solemate Mini?

For £80, the Jabra Solemate Mini gets a lot of things right. The colourful, robust design is easy on the eye, it’s the perfect size to throw into your bag and it’s loud for a speaker so small. NFC connectivity is a nice new addition as well, but it’s not necessarily a deal clincher.

Where it’s really let down is the performance in the sound department. There’s far too much distortion at top volume and the bass rattle is too noticeable when you are listening to music. Battery life is okay although if you are willing to spend more you can get a Bluetooth speaker that can go on for longer.

The Cambridge Audio Minx Go (£99) is a significantly bigger speaker but if size is not an issue you can get more refined sound and bigger battery life. If size does matter and you need a speaker to accompany movie-watching, the Solemate Mini is an affordable option.

The Jabra Solemate is a dinky little Bluetooth and NFC compatible speaker with a big sound that overpowers everything else.