What are the Jabra Elite 65t?

The Jabra Elite 65t are true wireless earphones. All the hardware and batteries are housed in the earpieces, leaving no cables to get in the way.

These earphones are a close relative of the Jabra Elite Sport we looked at last year, but without the heart rate-tracking tech. In return you get a smaller, easier-to-fit earpiece. Plus, there’s a digital assistant built-in from day one.

However, the Elite 65t also have a less grand, engaging sound than Jabra’s older model. As such, they struggle to compete with the Sony WF-1000X, too. 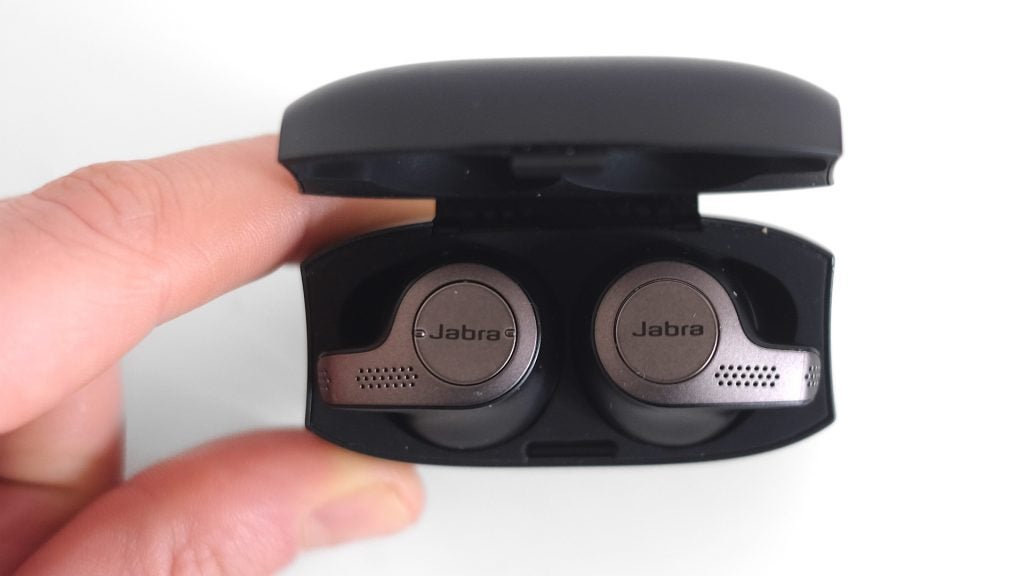 Jabra is one of the biggest names in headsets for call centres and offices. This is hardly glamorous, but it’s a good starting point for a headphone-maker.

Like most true wireless earphones, the Jabra Elite 65t’s earpieces are chunkier than average, with a little stalk poking out of the end. This aims the mic towards your mouth. Additional mics on the side are used to cancel out the noise of wind, to make your voice sound clearer. 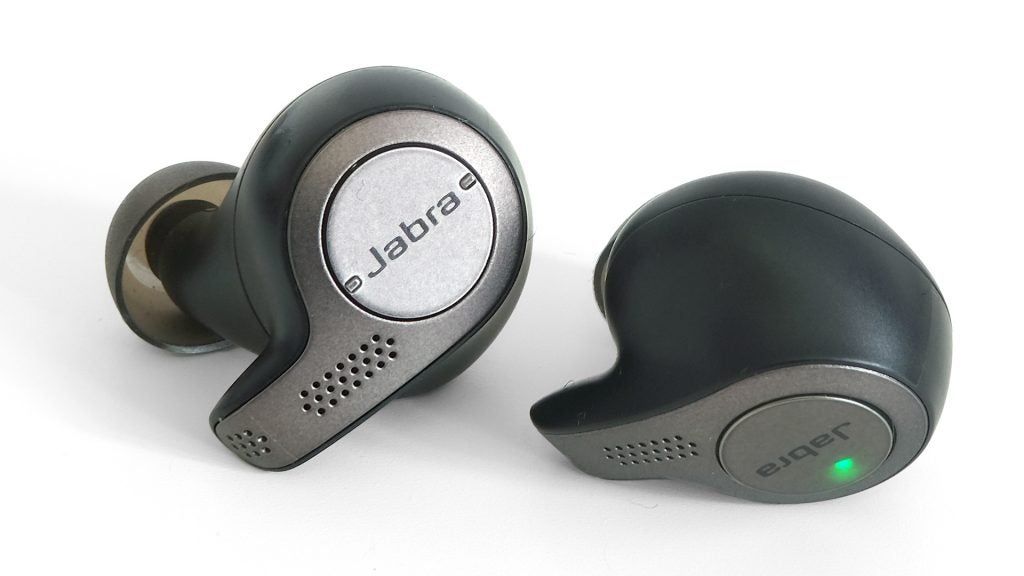 The Jabra Elite 65t still feel far smaller in your ear than the Elite Sport. Fitting the older set into your ears is similar to jamming in a custom moulded pair. You have to push your ear cartilage around to get them in place, because the heart rate sensor demands a tight, secure fit.

The Jabra Elite 65t pop into your ears with much less fuss, as they lack the extra rubbery part that sits behind your antitragus – the lip of cartilage at the bottom of your outer ear.

In theory, this should result in a less secure fit, but I’ve worn the Jabra Elite 65t while running without the slightest suggestion that they might fall out. 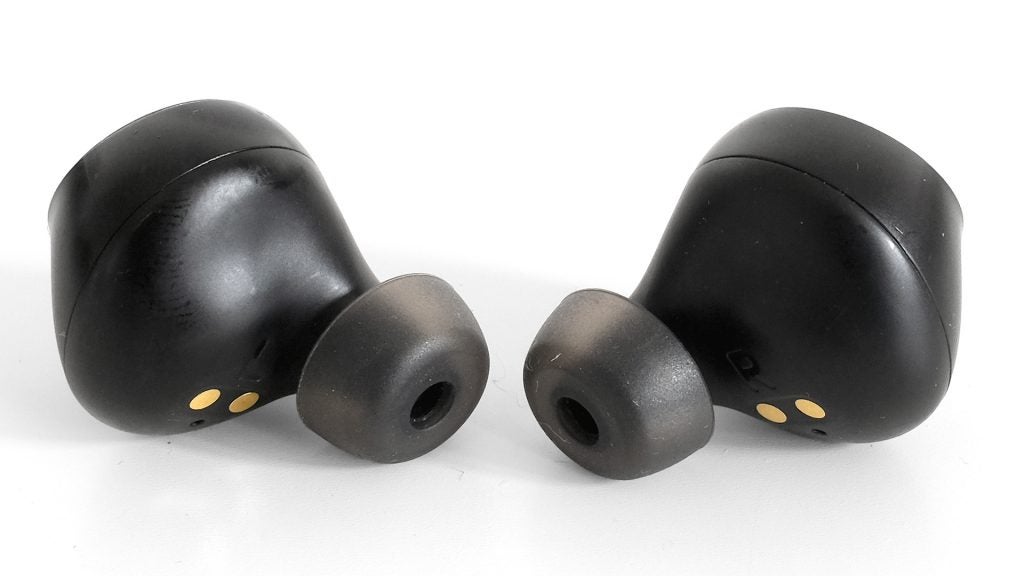 That said, if your running takes place out in fields or on the street, I’d suggest the Elite Sport instead since they’re marginally more difficult to knock out of place.

You also need to prepare for a more invasive feel than the Apple AirPods. While easy to fit in place, the Jabra Elite 65t do fill your ears more than an average IEM earphone (that’s one with a silicone tip).

I’d happily use the Jabra Elite 65t at the gym, but this model isn’t specified by Jabra for use during exercise. They’re certified to IP55, meaning they’ll handle “low pressure water jets from any direction”.

Upgrade to the Jabra Active 65t and you get IP56, meaning they can withstand “high pressure” water jets. For most of us, the standard version is likely to be fine.

The Jabra Elite 65t’s battery life is excellent. Most true wireless earphones will last around three hours off a single charge. These last up to five hours. 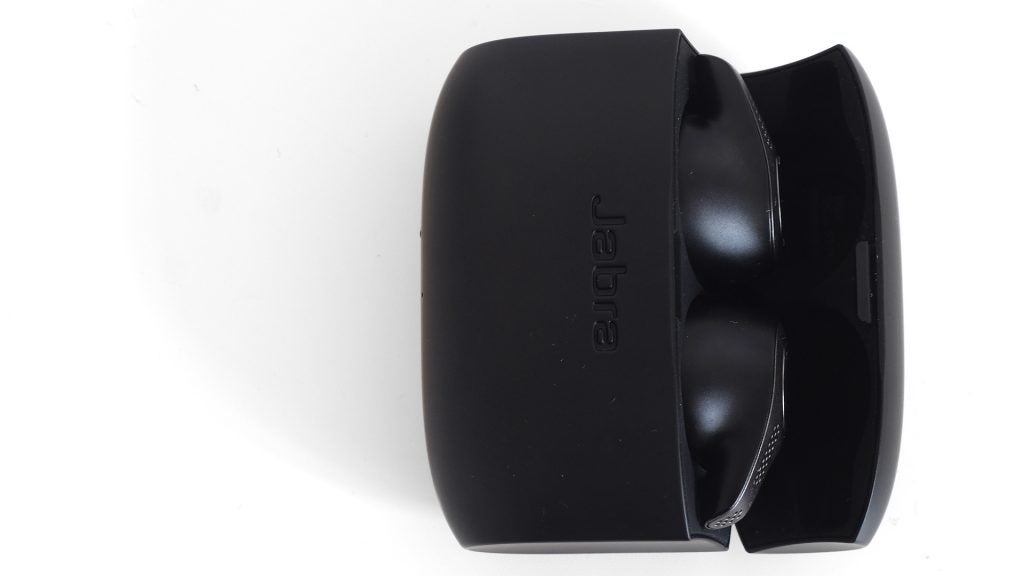 Using them out in the real world, stamina hasn’t quite lived up to these claims. However, this is probably the result of keeping them switched on in a coat pocket between listening stints. Clearly, the Jabra Elite 65t outlast much of the competition.

To recharge, the earpieces need to be placed in a neat little case; this offers enough juice for two extra charges. In total you’ll get up to 15 hours’ playback before the case itself needs to be charged. Note that Jabra has trimmed down the case a little since the Jabra Elite Sport – it’s now neat and pocket-friendly.

It’s charge speed that I appreciate most, however. I love wired headphones because I don’t need to remember to charge them, but the Jabra Elite 65t get you around 1.5 hours’ use from a 15-minute charge. That’s enough for a gym trip.

This is the kind of battery spec we need to see in all true wireless earphones.

Digital assistant support is another welcome extra. Long-press the button on the right earpiece and Siri, Google Assistant or Alexa will be engaged on your device — which one you get will obviously be determined by the phone or tablet used. 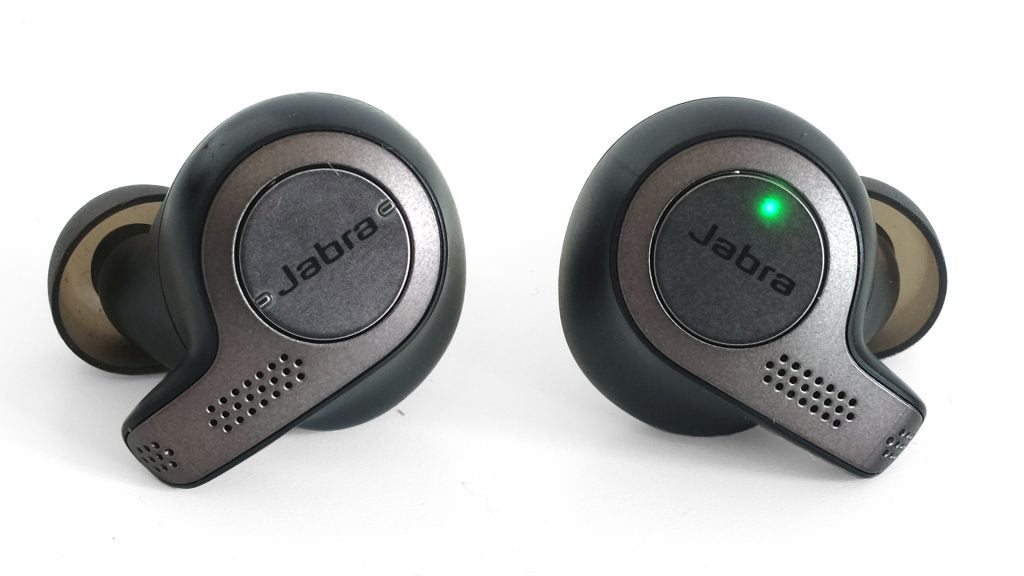 It’s neat – but, ultimately, a mapping of a feature common among recent three-button headphone remotes. I appreciate the redesign of the buttons more. In the Jabra Elite Sport, the on-earpiece buttons proved quite stiff; pushing them in too much could result in ear discomfort. The Jabra Elite 65t’s button action is lighter, less of a trial for your ear cartilage.

You’ll probably use the two little buttons on the left earpiece most. Quick presses alter volume; long ones skip tracks back and forwards.

The Jabra Elite 65t do everything I’d ask of a true wireless earphone, but their wireless performance is less than perfect. Walking around town, the left earpiece would occasionally phase in and out as it lost connection with the main right bud.

This has been a common problem amongst the first wave of true wireless earphones, but after seeing the improvements made to battery life, it’s a shame that inter-earphone connectivity still proves a distracting problem.

Don’t expect amazing recording/call quality from the integrated mic, either. While the 4x MEMs mic array is great for reducing wind noise, actual quality of voice recordings is just okay. 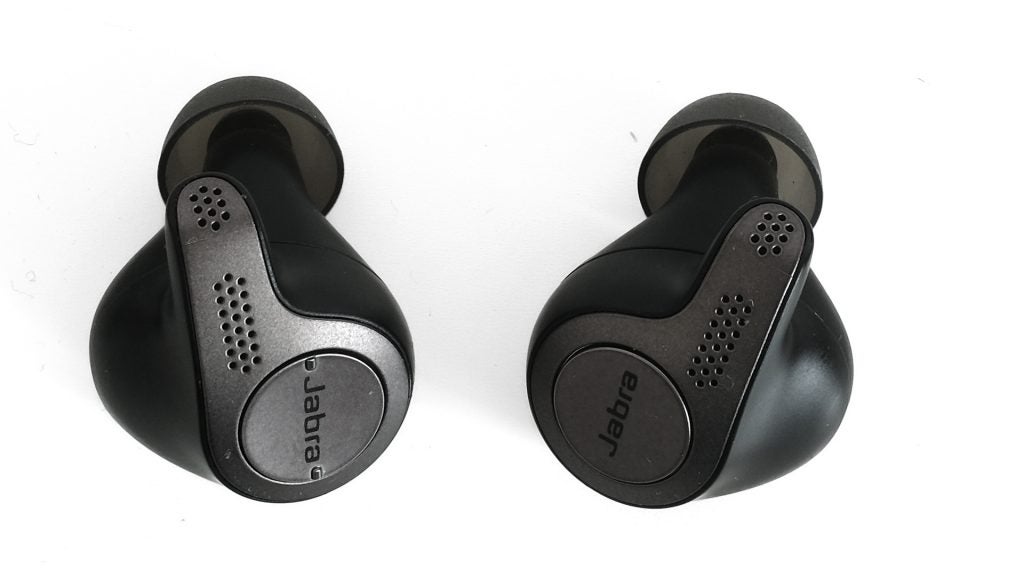 On first trying the Jabra Elite 65t, I was quite impressed by their sound. Many true wireless earphones display pretty uninspiring sound quality, as many manufacturers (many that we won’t have heard of) jump on a new tech trend without necessarily perfecting each element.

These aren’t earphones that sound compromised for the sake of their wireless features. They’re clean, clear and detailed, with better separation than the many sub-£100 true wireless earphones found online.

I could happily use the Jabra Elite 65t as my main earphones, if I wasn’t put off by their connection issues.

However, they aren’t quite as dynamic or involving as the best true wireless earphones at the price. I expected the Jabra Elite 65t to sound just like the Elite Sport, but they don’t. The older Elite Sport have more powerful bass, and much better low-bass response, which results in a more exciting delivery. 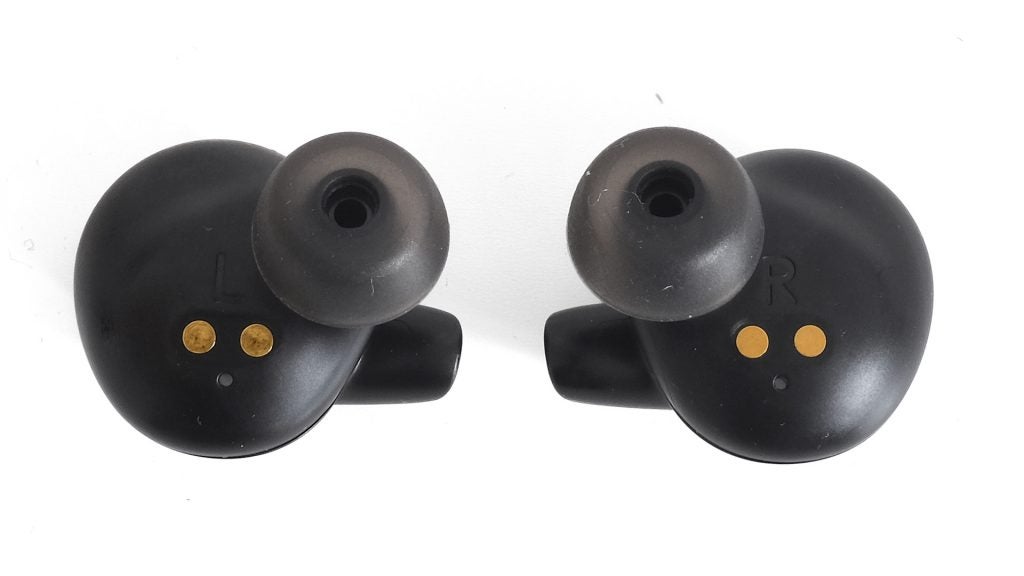 The Elite Sport mids are also fuller and richer-sounding. Their tonal response across the mids to the treble is more even, where the more stripped-back tone of the Elite 65t leaves an audible peak in the upper mids/treble.

One of the ways I analyse a headphone is to listen to a track with a prominent vocal and ask “where am I hearing the detail?” The Elite 65t don’t render texture in the lower and mid-range “zones” as well as the Elite Sport or Sony WF-1000X. The upper-mid peak also reduces the realism of vocals a little, and can turn slightly hard-sounding at high volumes.

Looking deeper into the specs and you’ll discover that the Jabra Elite 65t appear to use a different driver to the Elite Sport. These have 6mm drivers; the Sport use 6.8mm drivers. As well as providing richer sound, the older Elite Sport have a wider soundstage.

Most people will be completely satisfied with the Jabra Elite 65t sound, though. But now the older pair is available for roughly the same price online, it seems important to highlight these differences. 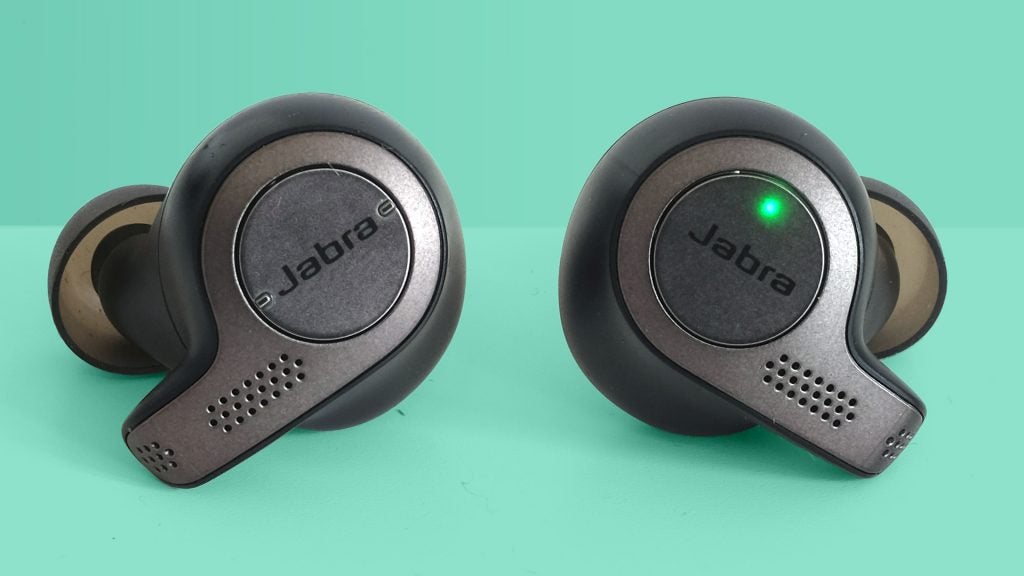 Why buy the Jabra Elite 65t?

The Jabra Elite 65t solve one of the most annoying issues of true wireless earphones: poor battery life. Five hours is still short in the wider world of wireless headphones, but it’s up to double that offered by some rivals.

These earphones are also more comfortable than the older Elite Sport, thanks to their smaller size and easier-to-press buttons.

However, they’re not quite the best sounding true wireless headphones around. The Jabra Elite Sport and Sony WF-1000X are more engaging and dynamic, which is an issue now that they can be picked up for a similar price.

Better battery life, better comfort – but not quite the best sound in this class.