A built-in car kit is probably the best option for using your mobile in your motor, but sadly, these are still not yet standard in most cars. Another option is a Bluetooth headset, but with their small buttons, they’re rather fiddly to use while driving. Probably your best bet then is to opt for a Bluetooth speakerphone like the Jabra Cruiser. The Cruiser is essentially an update of Jabra’s older speakerphone, the SP700, and like that model one of its key features is its onboard FM transmitter that allows you to send the audio from incoming callers or music streamed from your phone to your car stereo’s speakers. 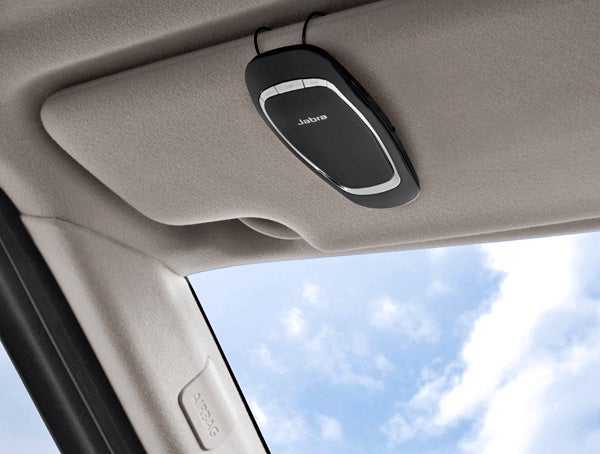 As the Cruiser is designed to clip on to your car’s sun visor there’s a springy metal clasp on the rear that holds it firmly in place so it doesn’t move around while you’re driving. The speakerphone is actually relatively small and at 17mm is pretty thin too, so it doesn’t draw too much attention to itself once it’s in place. Nevertheless, the glossy black finish and chrome trim do make it look rather more attractive than Jabra’s previous efforts like the SP200 or SP700. Because the Cruiser is powered by a rechargeable battery it doesn’t have to be just used in a car, you can also use it in an office or meeting room for impromptu conference calls and in this type of environment the metal clasp on the rear acts as a handy stand. 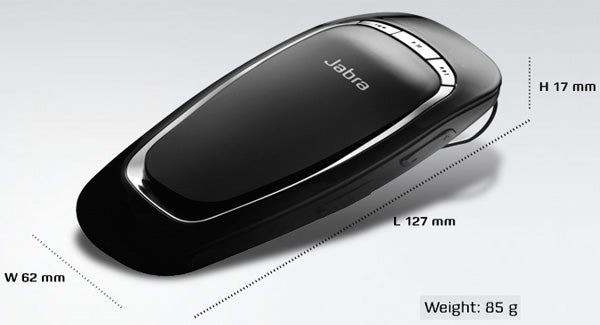 Pairing a phone with the Cruiser couldn’t be more straightforward as the device itself gives you spoken instructions in a synthesised voice on how to do this when you first turn it on. In fact, this synthesized voice is used for a number of different functions. For example, it notifies you when a Bluetooth connection has been established or when it loses the connection, and announces the phone numbers of incoming callers. Like most speakerphones, the device can be paired with two phones at the same time so if you share your car with your partner you don’t have to constantly keep pairing and re-pairing your phones with it.

Messing around with fiddly buttons while driving is a nightmare, so Jabra has ensured that all the main controls are as simple as possible to use. For example, the front edge of the device acts as the main call control button so you just need to tap it once with your finger to pick up or drop a call. The older SP700 model also used this button as the on/off switch (you had to hold it down for several seconds), but thankfully the Cruise has a dedicated power switch on the left hand side, which makes it faster to turn it off and on. 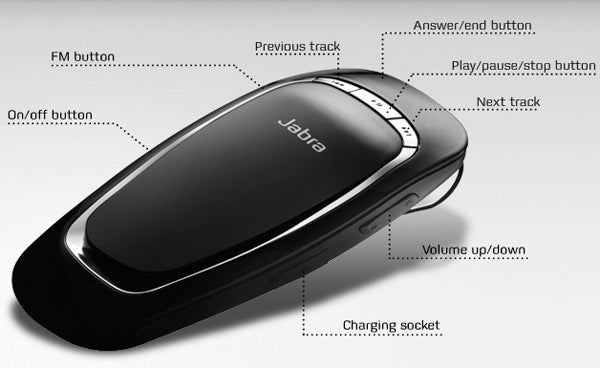 The left hand side is also home to the FM button. When you press this, the Cruiser announces the frequency to tune your car radio to in order to feed audio from incoming calls or music from your handset through your car speakers. This frequency can be adjusted by holding down the volume up button. The Cruise will then search for another free frequency and announce when it’s found one via the built-in speaker. This makes the FM transmitter simple to setup and use, and the results are good too. It’s a real boon using your car’s speakers to listen to callers rather than the built-in speaker, and streamed music is also impressive (even though A2DP streaming is, by its nature, far from perfect given the limited bandwidth available).

Unlike that older model, the Cruiser now also supports AVCP on Bluetooth for controlling the playback of music tracks. The font face of the device has a play/pause button along with two track skip buttons. As long as your phone supports the Bluetooth AVCP protocol (the iPhone doesn’t because its Bluetooth support is one-step up from useless) you should be able to use them to control music playback from your handset. It certainly worked without any problems with a Nokia XpressMusic 5730.

The right hand side of the Cruiser is where you’ll find the easy to use volume rocker switch along with the mini-USB port that’s used for charging the device. Jabra includes a car power adaptor in the box, but you can also charge the device from a PC or laptop via USB. It takes around two hours to fully charge the speakerphone and once it’s full of juice you’ll get around 14 hours of talk time or 13 days on standby, which is similar to the previous S700 model.


Jabra has also added a few status indicator lights to the front of the unit to provide quick visual feedback on the device’s status. There’s a battery indicator, call status light, Bluetooth activity LED and indicator to show when the FM transmitter is active.

The big question, of course, is how the Cruiser performs as an actual speakerphone. Unlike many cheaper models, the Cruiser has twin mics and onboard DSP processing to help it cut down on background noise. This makes a noticeable difference in use as it blocks out all but the loudest of background sound without making the audio come across as overly processed. Incoming callers also sound good through the speakerphone’s reasonably loud speaker, although naturally you get the best audio quality when you run it through your car stereo’s speakers via the FM transmitter. 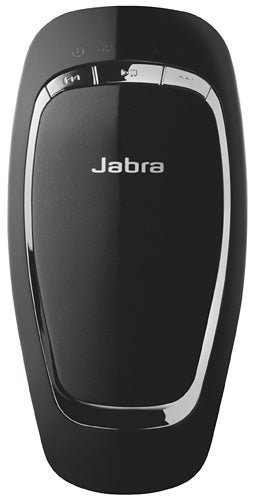 If your phone supports voice dialling you can use this feature with the Cruiser and it actually works pretty well as in our experience the noise-cancelling helped the phone understand voice dialling instructions that bit better. However, unlike the Parrot Minikit Slim, the Cruiser doesn’t call out the names of incoming callers. Instead, it just calls out the numbers, which isn’t quite as user-friendly.


Overall, we really like the Cruiser. The sound quality from the built-in speaker and microphone is very good and the ability to send callers and music tracks through your car stereo is a major bonus. It’s a bit of a shame it can’t call out the names of incoming callers, but in most other respects this is a top-class speakerphone.