The Cloud looms above us all, threatening to rain down a tech torrent onto our hard drives and memory sticks, frying their circuits into obsolescence. Thankfully, we’re not quite there yet but the iTwin marks a step in that direction. It’s a twin pack of USB sticks that lock into each other, and can transfer files between each other over the web – from thousands of miles apart.

Stuck together, the iTwin twins look like a double-ended USB flash memory stick. However, there’s no real storage available in either. Instead, this natty gadget creates a sort of wormhole through the internet, joining together the two computers that the halves of the iTwin are plugged into. 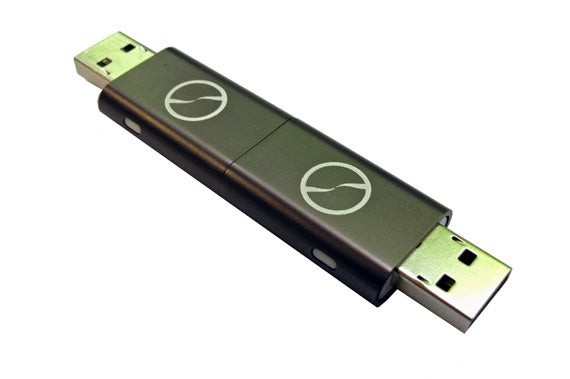 It doesn’t all happen by magic, mind. To start with, the two ends of the iTwin have to be plugged together, and into a computer. The driver software, included on the stick itself, will install and the two ends will be linked together as a pair. You then need to leave that USB stick plugged-in, and the host computer switched on, before plugging the other end into another internet-connected computer.

Do so and, voila, the software will install in a minute on the second computer and the estranged identical twins will start talking over the web. However, you aren’t given full and unrestricted access to the first computer’s hard drive.

Instead iTwin creates its own “virtual storage” drive that appears as a network drive in Windows’s My Computer area. Either computer can then fill this space with any kind of files and folders – it’s much like using a USB stick, except that there’s no actual storage here in the traditional sense. The data isn’t uploaded to some mystical cloud server either. Getting your head around how iTwin really works takes some thought. Adding a file to the stick’s storage is more like clearing it for sharing with its buddy rather than involving any direct file transfer. 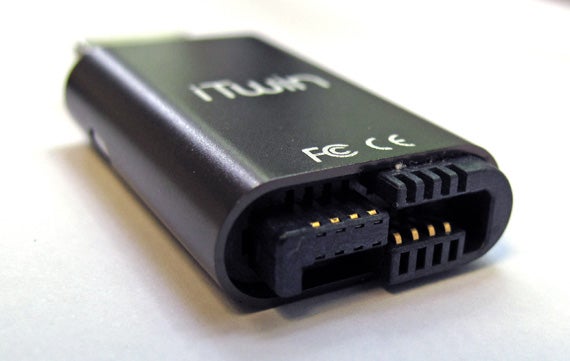 When online transfer of files is very simple with a high-speed broadband connection, iTwin relies on the dual selling points of security and that “it just works” factor, in justifying its £100 price tag. For the most part these two arguments are sound too. We did have a little trouble installing the software on one computer during testing, but this seemed to be due to an earlier mid-install abort and was soon sorted.

The iTwin’s metal-covered body is strong and very light – not too surprising considering there can’t be all that much to fit in, component-wise. The only durability concern is that the connection between the twins is exposed. However, it’s more likely to become a problem by being caked with dirt, dust or generic gunk rather than the victim of physical damage. Lights on the side of the iTwin tell you if there’s something awry (a red light, naturally), and if it’s currently working away – with a blue light.

The iTwin’s performance is reliant on the speed of your broadband connection more than anything else. In transferring a file from one to computer to another, the host has to upload as the second computer downloads. Effectively, the iTwin turns your computer (the one storing the file being transferred) into a server.

The connection is reliable and the communication between the two halves of the device is very quick. If the software has already been installed on a computer, it only takes a few seconds for the two to perform the necessary handshake. However, this arguably isn’t enough to justify a £100 outlay. Forgetting full cloud storage solutions like Asus’s Web Storage and HTC’s Sense storage, and standalone options such as Rackspace and Dropbox, many people’s needs can be met by simply using Gmail (using the classic emailing yourself an attachment method) or services like YouSendIt. 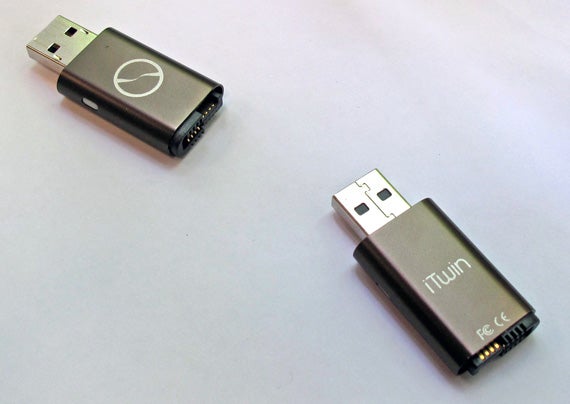 What the iTwin has over these is a different approach to security. The connection between your two computers is secured with 256-bit AES encryption, and as there’s no data stored anywhere apart from the hard drives of the sender and recipient, there’s no way for data to slip out accidentally. You can also use a password, so that plugging each end of the iTwin isn’t enough to get them talking.

There’s always the chance that you could lose one end of the iTwin, but should that happen you can deactivate the lost half using your remaining half. And if both go missing, you’ve only lost the hardware as the iTwin itself doesn’t store any data. A neat, much-welcome addition is that its makers let you buy a replacement half iTwin for half the price of the full package. No extra fee lurks aside from postage and packaging. 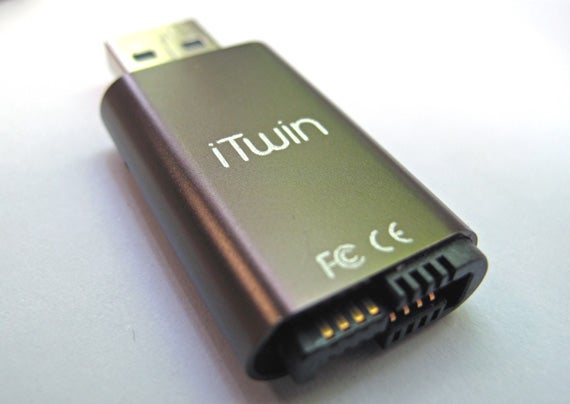 However, in spite of its simplicity of use, its sound integration with Windows and overall reliability, we think few will be able to justify the initial expenditure. There are no costs to incur through normal usage in the future, but when your computer has be left on throughout the day in order to make your on-the-go half of the iTwin useful, it’s not the easiest device to slip into your lifestyle unless you already have a reason to keep your computer on all day long. And if you do that already for no particular reason, think of your bigfoot-sized carbon footprint for once.

We’d find it easier to recommend if it shed £30 off its price tag, but unless a big-name alternative decides to one-up iTwin such a price cut probably won’t happen any time soon.

The iTwin does what it sets out to do well, connecting two PCs over the web securely, irrespective of their position in the real, living, breathing world. However, the fairly high price and functional limitations of the technology – primarily having to have your host computer on all the time – limit its appeal.

If security is a key concern, the iTwin has what you need. But if it’s not there are plenty of good, free Cloud storage options out there that will do the job for most personal use applications.