One of the most challenging issues for any iPod speaker dock is this: how do you get a big sound from something small enough to sit on the average sideboard or bookshelf? The likes of BOSE, Klipsch and JBL manage it through careful acoustic engineering, squeezing some kind of warmth and bass response out of a box that’s seemingly too small for any such thing. Other systems, like the Fatman iTube or the Altec Lansing Octiv Air, get around it by splitting the dock from the speaker, meaning you can place the dock somewhere convenient and have larger speakers wherever you want them.


Our jolly German chums at Teufel, however, have taken the third route, putting a standard-sized speaker dock together with an outboard subwoofer to make a speaker dock that – at its best – sounds a lot larger than it looks. Hide the sub away and choose your music carefully, and friends and family members simply won’t believe that something as small as the iTeufel can dish out such a hale and hearty noise. 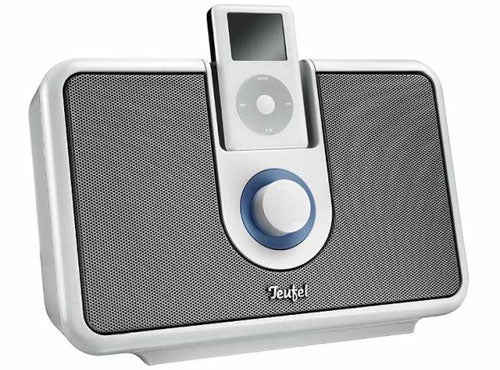 I know from reading Danny’s reviews of Teufel’s home cinema equipment that the company puts a great deal of effort into stylish design, but I’m not sure the iTeufel is one of the company’s most successful endeavours. The dock itself is crafted from high-gloss plastic with a metallic mesh over the drivers.


The distinctive Teufel logo looms a little too large, distracting attention from what should be the focal point: a swish metallic volume knob surrounded by a glowing volume indicator. And while it has been the fashion with recent docks to cradle your iPod securely within the body of the case, the iTeufel leaves it sticking out of the top by an inch or two. Nor is that iPod held in place by any fancy-pants mechanism, just a standard-issue iPod dock adaptor.

Three other factors tell me that Teufel hasn’t been paying all that much attention to the competition. Firstly, there’s no video output – I can live without it, but if you use your dock in the living room it can be a selling point. Secondly, the iTeufel seems even more vulnerable than most docks to interference, amplifying the noise from my 1G iPod touch to really irritating levels.


Finally, and most seriously, the iTeufel hasn’t been changed since its German launch to support the most recent generation of iPods. Anyone with a 2G Touch, a 4G Nano or a 120GB Classic should steer well clear, not least because the iTeufel’s dock could actually damage your player. Don’t even think about plugging an iPhone in! 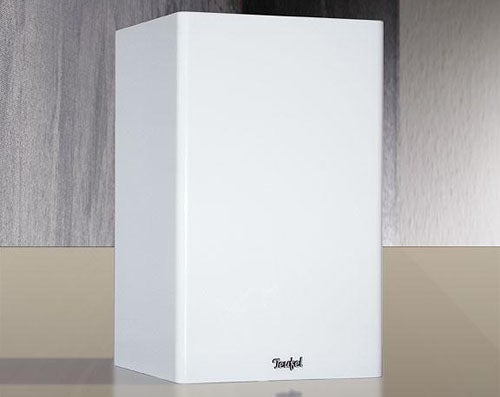 Should those affected feel gutted that they’ll have to do without? Well, yes and no. As I said right at the start, the combination of dock and sub is capable of producing a surprisingly big noise. There’s more open space and detail than you’d expect from an all-in-one dock of a similar size, and the bass response is bordering on excellent. Nor is this sledgehammer stuff. Even with the volume on the subwoofer turned right up, the bass sits in well with the rest of the sound, adding power to the articulate low notes without bashing you around the ears with a raucous thumping.


The sound is rated at 60W and the output is certainly powerful. Too powerful, in fact, for the average living room unless you’re having a party. Unlike many compact systems, the iTeufel is happier when run at mid to high-level volumes. Inside the dock unit itself you’ll find two 80mm low to mid-range speakers and a 25mm silk dome for treble, and towards the top of the audible range you’ll hear a sometimes breathtaking clarity and a really rich, bright tone. These are the kind of speakers that make high vocals or loud brass instruments sing.

There are plenty of tracks where this setup really works. Not many docks I’ve heard have put out a better rendition of Radiohead’s “How to Disappear Completely…”, while Ladyhawke’s “From Dusk ’til Dawn” is pumped out in true floor-filling style. As the iTeufel is a German system I felt sure that it would enjoy a spot of Wagner, and sure enough the funeral music from Gotterdammerung sounded borderline spectacular, the high brass notes blasting out with the kind of godlike strength that makes mortals tremble before thinking seriously about purchasing a new BMW. “The Bones of You”, from Elbow’s The Seldom Seen Kid was another treat, each instrument in the mix handled with the sort of poise and definition I might expect from a more conventional Hi-Fi system.


But the iTeufel has one serious weakness, and that’s a muffled, tired and less-than-crystalline mid-range. More intimate, acoustic tracks with softer vocals fall flat. Thick, heavyweight guitar riffs fail, time and time again, to make any impression. Existing owners of BMWs would not be impressed by the iTeufel’s performance of Ride of the Valkyries, as the hard-edged, high strings completely overpower the brass section carrying the famous melody. It should be stirring, but instead it just sounds manic. In short, the iTeufel is a great sounding speaker dock when the material plays to its strengths, but it’s simply not a brilliant all-rounder. And when it fails, it suddenly sounds like just another boxy iPod speaker dock. 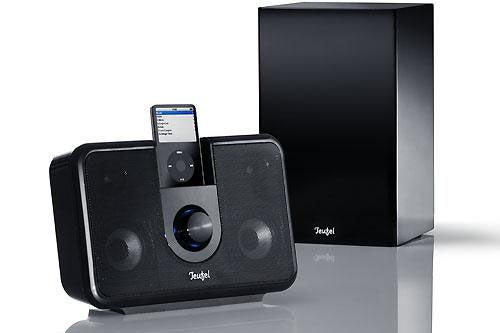 While I’m moaning I also ought to mention that the mesh on my test sample resonated in harmony to some particular notes (most notably, the root note in the hard-strummed chords that run throughout Bon Iver’s “Blindsided”). This might just be a fault of my sample, but if it isn’t it’s a bit of an annoyance.


So, again we have a very promising high-end speaker dock that falls apart on overall sound quality. Below £100 we could be, and are, a lot more forgiving, but at nearly £250 for what is – compared to its rivals – a distinctly no-frills system, the iTeufel doesn’t sound consistently good enough to make me recommend that you rush out and buy it. If Teufel can tweak the mid-range and fix the compatibility issues then there’s still a chance for this much-admired German audio specialist to make its mark on the iPod market, but it’s going to take something a little bit more refined than this.


Given the quality of Teufel’s recent home cinema products the iTeufel is slightly disappointing. The output can be excellent, but not consistently enough for a recommendation.