The more observant of you will have already noticed that the VMC1080 from British company Isol-8 doesn’t look much like a TV or projector. And there’s a good reason for this, namely that it isn’t a TV or projector!


What it might be, though, is your TV or projector’s new best friend. For according to Isol-8, the VMC1080 can single-handedly have your video display device delivering better colour, detailing, contrast, and motion handling – all while simultaneously protecting it from those frankly terrifying critters known as ‘mains-borne spikes’. Yikes.


If the VMC1080 can deliver on even some of its promises, it might just turn out to be the best £179 you’ve ever spent. Especially if you’ve got a particularly large TV or a projector, where any improvements to your picture quality will be that much more obvious.


At which point we’d probably get on and actually say what the VMC1080 is. Namely, a Video Mains Conditioner. 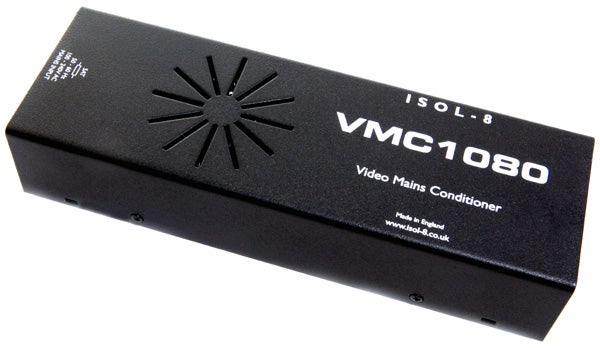 And yes, we can already feel the waves of cynicism washing over this review. For we’re only too aware that many normally mild-mannered and genteel AV folk suddenly explode into uncontrolled anger – red faces, sputtering, clenched fists, the works – at the merest suggestion that using expensive cables or electrical filters can actually make a significant difference to video performance.


Actually we have a little sympathy for this feeling ourselves – up to a point. For we really do question if some of the truly esoteric cabling out there, with prices of many hundreds of pounds for a few metres, can really outperform something much more affordable from the likes of IXOS or Supra. But at the same time, few people seem to doubt (again, up to a point) that superior cabling can improve the performance of high-spec audio gear, so why shouldn’t it be the case with video too?


After all, there are actually more elements to a video feed that could be improved by better cabling than there are elements in an audio feed (cue a legion of hi-fi lovers lining up to shoot that argument down!).


Also, let’s be fair, at £179 the VMC1080 isn’t exactly megabucks by the standards of the premium interconnect world. So let’s just take a deep breath and give it a chance, shall we?


We should start, obviously, by stating exactly what a mains conditioner does. Basically, it sits between the mains supply and the power inlet to your display device and ‘cleans’ the incoming power, so that the flow is more stable and less polluted by noise – including the noise that can be added to your mains by other electrical devices in your home. This should result, the argument goes, in better picture quality. Plus, of course, the VMC1080 can take the hit rather than your display if you’re unlucky enough to get hit by one of those sudden high voltage mains spikes we hear about.

The key to how successful a mains conditioner might be – if, of course, it makes any difference at all – inevitably comes down to the quality of its filtering systems. And here Isol-8 seems to have gone a bit further with the VMC1080 than we might have expected for its money. For it combines differential and series mode filtration, the latter of which is an unusual find on an affordable conditioner, and should help deliver – to put it all in more layman-like terms – really substantial levels of noise reduction.


Given that the Isol-8 has been designed to either fix to or sit near your TV or projector (cable ties and even wall mounting eyelets are provided with the unit), the VMC1080 obviously also needs to be well screened to prevent electronic interference seeping out of its body while its innards work on your mains. With that in mind, the VMC1080 is reassuringly solid. In fact, it’s a brick of a thing, weighing in at 1.3kg and looking like the biggest, and frankly most boring power pack you’ve ever seen.

The VMC1080 is rated to handle 5A currents, so don’t try and use it with any devices more power hungry than that. There are a couple of other installation limitations you need to be bear in mind too. First, it should be positioned with at least 20mm of clear space above its top edge. Second and more alarmingly, it only supports kettle lead cables.


If your TV uses either a two-pronged lead or a fixed cabled connection, as many LCD TVs actually do this year, then basically the VMC1080 isn’t for you. Instead you’d have to look at the VMC1080’s bigger brother, the entire system-handling, £369 Powerline 1080, with its 4 x 13 amp sockets.


So much for the background, um, noise. Let’s now get to the main event: finding out if the Isol-8 actually does what it says on its chunky, profoundly serious-looking tin. 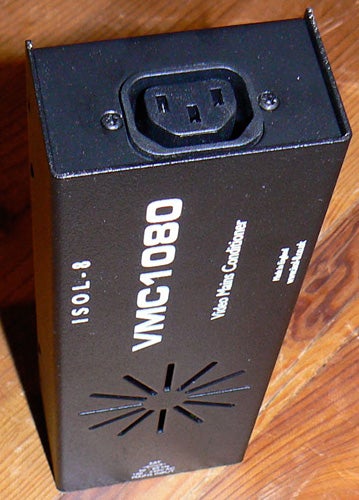 To get a handle on the scope of the VMC1080’s potential, we tried it with Sim2’s Mico 40 projector, Panasonic’s 65in P65VT20 plasma TV, and finally, to see if there’s a difference with a smaller screen, Humax’s 32in 32DST LCD TV.


If you’re wondering why we chose the rather aging and unimpressive Humax, it’s simply because at the time of writing, in a salutary reminder of possibly the VMC1080’s single biggest failing, it was the only smallish TV in our crowded storage room that still used a kettle lead connection.


Starting with the projector, we have to say the results we witnessed completely caught us by surprise. For slipping the VMC1080 into the Mico 40’s power feed really does deliver a performance boost that’s strong enough to be immediately apparent.


The single greatest beneficiary of the mains cleaning appears to be contrast. ”Call of Duty: Modern Warfare 2” on the Xbox 360, for instance, looks more solid and dynamic due to a clear extra divergence between the image’s darkest and brightest parts.


Possibly because of this, or maybe because the filtered mains feed reduces interference, the picture also looks slightly crisper and more detailed.

The extra contrast even helps colours look more richly saturated too, and perhaps most unexpectedly of all, motion looks slightly more convincing, be it camera pans or soldiers running through barrages of enemy fire.


Honestly, we hadn’t expected the differences to be this pronounced.


Shifting to a Blu-ray, the image boost from the VMC1080 is still there, if slightly more subtle. Here the greatest difference can be seen in the shadow detail obvious during dark scenes – a result again, we suspect, of the VMC1080 somehow allowing the projector to realise a little more of its native contrast.


Being able to noticeably boost the performance of even a £10k projector like the Mico 40 with a bit of kit costing just £170 really does seem like good value. 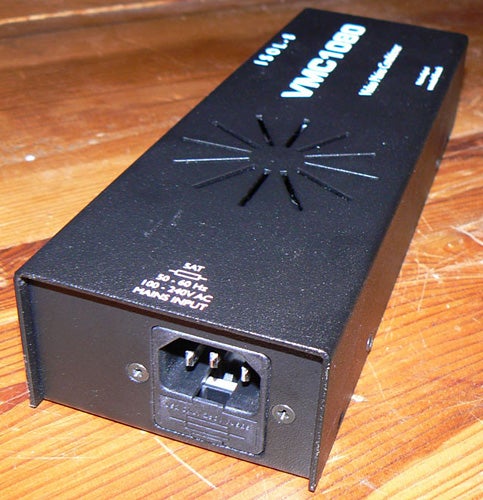 Turning to the 65in Panasonic TV (which we’ll be reviewing soon, we promise!), there’s still a definite nudge up in quality with the VMC1080 in play, but it’s not as pronounced as with the projector. There’s a small contrast expansion, and a touch more precision with detail, especially when the camera is moving.


Again, this is at its most pronounced with MW2 play, but Blu-rays look better too. Though here the main differences seem to be in colour saturation and, pleasingly, a reduction in video noise levels. The VMC1080 even improved 3D playback a little, making images look a touch cleaner and smoother – though the VMC1080 can’t get rid of the occasional moments of crosstalk that even Panasonic’s plasmas suffer with to some extent with 3D.


Finally, there’s the 32in Humax TV. Predictably the VMC1080 struggled the hardest to make its presence felt here. There’s a touch more colour richness and a touch less noise to be seen, but the screen’s basic lack of contrast seems beyond the VMC1080’s abilities to improve, and at this screen size we struggled to discern any tangible benefit in terms of extra detail or clarity.


The VMC1080 isn’t a miracle worker. It can’t make a rubbish screen average, an average screen good, or a good screen great. It’s also a real shame given the current shift towards two-pin or fixed power cables that it can only support kettle leads.


But it certainly can introduce incremental but surprisingly discernible picture quality improvements, with the size of the increment increasing in proportion to the size of picture your display device produces. This is in itself much more than we’d necessarily expected the VMC1080 to deliver, and makes it look pretty good value too when you consider how little £179 is in relation to the amount you might have splurged out on your big-screen TV or projector.