The current king of mobile storage is the USB memory key. Available in a huge variety of designs, shapes, sizes, colours and capacities, these versatile, extremely portable gadgets are pretty much the most prolific way we move data on physical media today. Of course, with their huge user base, a saturated market and ever narrowing margins due to declining memory prices, manufacturers are being put under ever more pressure to come up with ways of distinguishing their products from the competition.


Some employ unique designs, flashing lights, or odd colours. There are ones dressed up to resemble animals, ones that have extendable cords, and ones that are as flat as two credit-cards stacked together. Others come up with inventive ways of securing the cap (like OCZ’s ATV range), something I wish all manufacturers would do since it’s incredibly annoying to lose them. Of course, if you’re California-based IronKey, you just build what its creators claim is the “world’s most secure flash drive”. 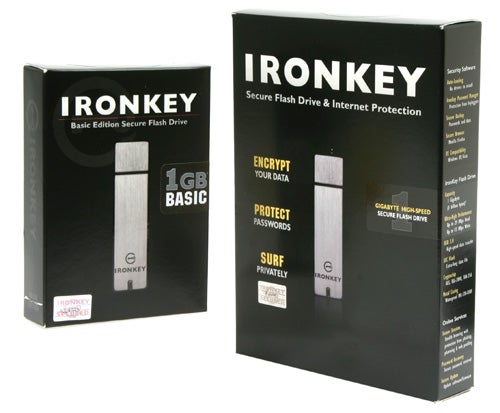 Is this claim justified? Well, that really depends on what you mean by secure. If you mean from the elements, then something like Corsair’s Survivor drives would probably serve you better (can’t beat aircraft-grade aluminium and water resistant to 200 metres!). Unlike the IronKey (and most other memory sticks for that matter), the Survivor also uses a screw-cap system that does not place any stress on the actual USB connector. 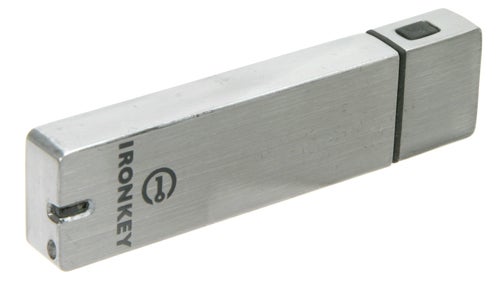 But as USB flash drives go, the IronKey – which is offered in a range of one to four gigabytes and uses dual channel SLC NAND flash memory for a long data life and a good turn of speed – is still pretty rugged. Built into a metal housing with a rubber interior and seal, it ought to be waterproof (to an extent), and hold up fairly well against wear and tear, bumps and drops. It certainly looks impressive, with its clean lines and brushed metal finish, and it’s more likely that your key-chain or lanyard will break than the stick’s securing port, which is a hole drilled in its solid surface.


Just a quick note on packaging. There’s no sign of nasty finger-tearing blister packaging here, just a large cardboard box filled with thick grey foam protecting the drive. It’s easy to open, and very likely to protect the IronKey from obscene amounts of potential damage during transport. There’s even a foam-insert for a non-existent key, which is a nice way of incorporating the company’s logo.

But getting back to security, the IronKey’s main claim to fame is not that it protects your data from natural elements, but rather from human ones. While many memory keys these days offer some form of software encryption, this tough nut does so through hardware. It contains a military-grade cryptography-chip that’ll automatically encode all your data (it can never be deactivated) using AES 128-bit encryption. Even better, if you enter the wrong password more than ten times, it self-destructs!


Of course, this is one of the first things I wanted to test, and having to wait until the end of the review for the IronKey to intone in a robotic voice ”you now have five… seconds… to evacuate the building” before spectacularly blowing up and taking several office PCs with it seemed like unfair punishment.


Fortunately, a little research allowed my fevered mind to cool, and I discovered that in this case, self-destruction would be of the distinctly un-dramatic variety. It simply means that both the flash and crypto-chip’s memory are overwritten in hardware, making it theoretically implausible (if not impossible) that your data can ever be recovered. Breaking the casing open to take out the memory chips intact is also made extremely difficult by IronKey using an epoxy compound that is likely to break them if forceful removal is attempted.

Another unique feature takes us back to the casing. One side of the IronKey has a distinctive metal coating that lets you engrave details – like your name, a return postcode/phone number or secure email, depending on the level of information you want to reveal – on it. The way to do this is simply by peeling back the protective coating (actually, this can be slightly tricky), and using a biro or other sharp object to ‘write’ in your details. It works really well, and means you’ll never have to worry about stickers falling off or ugly permanent marker marring your drive’s clean look. The only potential (though unlikey) worry is sharp objects like keys scratching the surface further and making the information illegible.


Like many of its competitors, IronKey lets you backup or store your passwords and other vital data securely online using Password Manager and Secure Backup. A less usual feature is that the flash drive also comes with an embedded version of Firefox. So what? you might say. Similar functionality is offered by Portable Apps for free. Well, yes, but there’s a little feature IronKey calls Tor Technology which makes it all worthwhile. Basically, it lets you surf the web in complete privacy and anonymity. All you do is click a small key icon to activate Secure Sessions, which will hide your identity, computer, and geographic location – it will even tunnel you through unsecured wireless networks. The only downside is that websites can load (sometimes significantly) slower.

If I had written this review a week earlier, I would have warned you that all its advanced features will only work on Windows XP or Vista, and so – as is unfortunately often the case – Mac or Linux users are left without military-grade self-destructing super memory drives. But that has changed since, and all IronKey products now support Linux distributions above Linux kernel 2.6.


However, since there are issues using Password Manager and the Secure Sessions Service with Firefox 3, it is recommended that you stick with the latest version of two (which you can update without adversely affecting the IronKey) until a solution has been found. 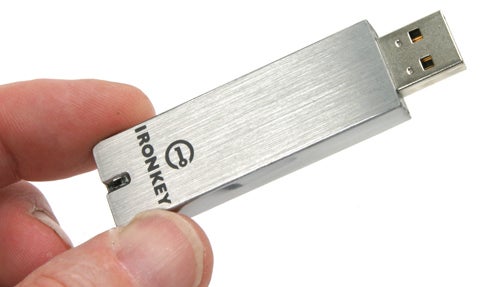 When you first plug the device in (and allow IronKey.exe to run under Vista), you are greeted with a custom window where you can name your drive and choose a password for it. The software is quite attractive, and is visually styled to match the brushed metal look of the stick itself. Having entered your password (and chosen to back it up online – or not), it takes about two minutes for IronKey to set up the various aspects of your key, including the encryption.


Then you can choose to activate the IronKey or leave it untill a later date. The activation process is quite lengthy and complicated, because of several layers of security that need to be enabled and personalised. Once that’s done, it will take another two minutes to update the firmware and applications, and then you’re good to go (this is by no means because the device itself is slow, as it copied a 715MB media file in one minute and five seconds).

Quite apart from knowing all your ‘sensitive’ data is as secure as it’s going to get, it’s really handy to be able to surf on almost any decent computer anywhere with your own secure browser, including a personalised history, bookmark index, download cache etc. Now when you go to the library you won’t have to use the outdated browser that keeps giving you error messages, and you won’t have to make sure you’ve left no traces of personal information on that hotel’s computer. This alone would make the IronKey worth its purchasing price for many people. Speaking of price, around £50 for the 1GB version is not cheap for its capacity, but if you need the IronKey’s features, it’s peanuts for what you’re getting. Now if only the IronKey gave me somewhere to put its cap…


If you want a relatively cheap and portable way to make your sensitive data as secure as possible and surf the web privately and securely from almost any computer, the rugged, waterproof and fast IronKey flash drive is currently your best option.

Many thanks to distributor Simms International for providing our review sample.