Exclusive to Nintendo 3DS
Ironfall: Invasion is a great example of something we normally see in mobile games: what you might call piano playing dog syndrome. The thing is, it’s so impressive that a dog can play piano, that some people lose track of the fact that our canine prodigy isn’t actually any good at it. While anyone with ears remains indifferent, you’ll still get some nutters claiming that it’s good enough to play the Albert Hall. Piano playing dog syndrome is responsible for a lot of the dumb reviews you see on the iTunes App store, where the most half-baked, dodgy FPS will be described as being a match for Call of Duty. It might also see some get carried away about Ironfall: Invasion. After all, here’s something nearly as miraculous as our musical mutt: a decent-looking third-person cover shooter that runs on the Nintendo 3DS.

It’s an impressive feat. It might look like a fuzzy low-res version of a 1998 PC shooter, but within those limitations it’s not half bad. It runs smoothly, has some nice reflective surfaces, and shows some impressive detailed character models and scenery from time to time. You can control it with analogue pad and stylus, circle pro accessory or – if you have the New 3DS – the new C-stick, which means it plays like a console shooter too. It runs at a smooth frame rate, and crams in most of the mechanics you’d expect, including locking to cover, blind-firing, a left-trigger sights view and mantling over barriers. 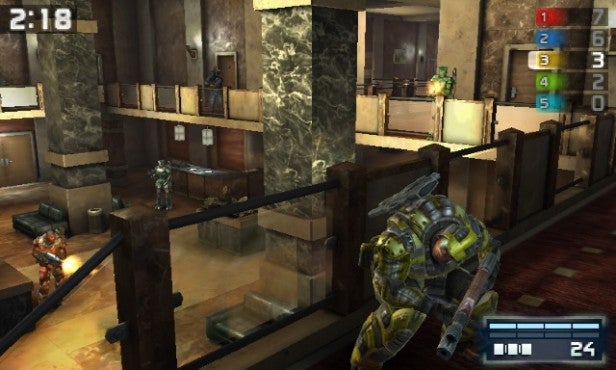 In short, it looks like VD-Dev – a small independent developer – has pulled off something magical on some pretty old and underpowered hardware. Sadly, once you start playing the thing, the dream goes horribly wrong.

For a start, there’s the controls. Try to play with the stylus handling the usual right-stick functions and it’s a horrendous experience, as your view moves at a glacial pace yet still seems hideously inaccurate. Switch to the C-stick on a new 3DS, and it’s still less than ideal, as there’s no way to balance responsive movement with accurate aim. Drawing a bead on an enemy gets easier with time, but it never feels second nature. 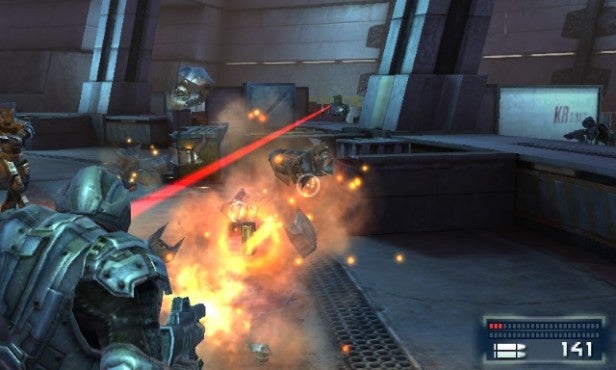 Then we get to the core gameplay. Ironfall: Invasion is full of weird robotic creatures, think Battlestar Galactica’s Cylons with heads like toasters, doing their best to do you in. They’re slow moving and not particularly smart, and tend to trudge around each level in a dull, predictable fashion. If they’re challenging at all to combat, it’s only because they’re packing some serious firepower and because most can take a few hits from your standard-issue assault rifle before going down. They’re next to no fun to battle.

To make things worse, the cover mechanics are inconsistent, making it hard to work out what counts as cover, and what you can or can’t mantle over – sometimes the most ridiculously insignificant barriers are just too much for you to deal with. And while VD-Dev clearly knows its way around the 3DS’s internals, it doesn’t seem to have a clue about level design or pacing. It’s not just the visuals that harken back to the early days of the modern FPS; there’s stuff here you haven’t seen since the world was full of small studios trying their best to knock out the next Duke Nukem.

As a single-player campaign, then, Ironfall: Invasion is mostly a dud. The one thing that makes it is its humour. We can’t actually say whether the humour is intentional or not, but the game, the characters and the storyline seem to have been conceived as an artful parody of action game clichés, or an attempt to visualise what your average mid-nineties Sega Megadrive developer might have made if making a Gears of War clone. The dialogue is either weird or just plain cheesy, the storyline makes no sense that we can fathom and the attempts at characterisation are laughable. Best of all are the enemies. Someone in their wisdom has called them the Dyxides, then christened individual units names like Dyxchields and Dyxspiders. How we chortled for a few seconds, before gritting our teeth and proceeding with the game. 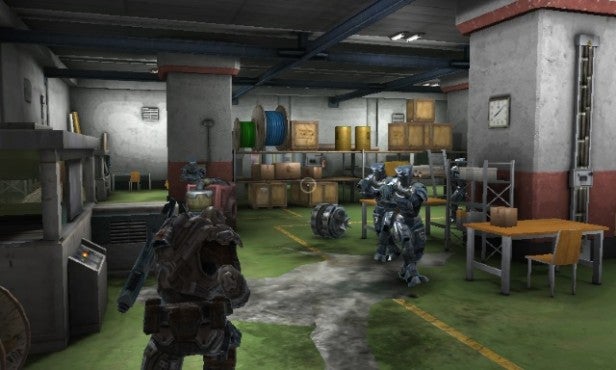 There’s also a multiplayer component, and if you want a fairly basic online shooter on the 3DS, then this one will just about do it. You’ll still be wrestling with the controls, of course, but other players offer a stronger threat than our unfortunately-named, toaster-headed chums. You can play deathmatch or team deathmatch with up to six players, and a straightforward survival mode on your own. It’s all rather reminiscent of how second-rate shooters did things back in 1997, but on this platform it hasn’t got much competition.

Arguably the best thing about Ironfall: Invasion is that you can sample it free, downloading the free demo from the Nintendo eShop, then coughing up £8.99 for the full single-player or multiplayer experience if you find you want more. We suspect you won’t, but who knows?

Verdict
Impressive as it is to see a fully-featured Gears of War clone on the humble 3DS, it’s a shame that this one is so dull and derivative, and so hamstrung by amateurish level design, tiresome enemies and poor controls. When the best thing about a game is that the enemy names sound slightly rude, you know it’s not worth your time. Try it if you must – the demo version’s free – but you’d have to be bonkers to buy it.