Blame Spider-Man 3, blame Fantastic Four: Rise of the Silver Surfer, blame Superman Returns, blame X-Men: The Official Game if you like, but I’m beginning to dread the arrival of the game of the movie of the comic-book on my desk. The simple fact is that most games based on super-heroes are pretty much rotten, and the ones based on movie adaptations are frequently the worst. Even when I love the movie, there’s something soulless, uninspired and totally lacking in ambition about the majority of the game offshoots, often because the developers seem to have felt that taking the scrolling beat-em-up and adding a scattering of super-powers is enough. The results are usually depressing. 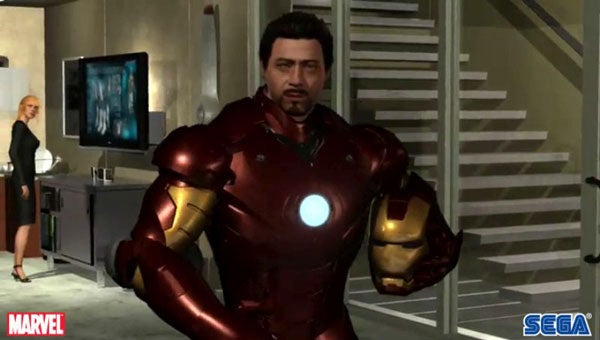 I had hoped Iron Man would be different, even if Riyad’s preview gave me some reason to doubt. Well, it is. It might not be entirely successful (to say the least) but at least Sega’s adaptation tries to escape the usual formula. Instead of a scrolling beat-em-up or a poorly thought out open-world adventure, we get a game that reminds me in turns of Battlefield, Ace Combat 6 and Hulk: Ultimate Destruction. In theory that sounds great, but don’t get too excited. While Iron Man’s shiny red and gold armour isn’t riddled with the usual malfunctions, it’s still beset with numerous flaws. 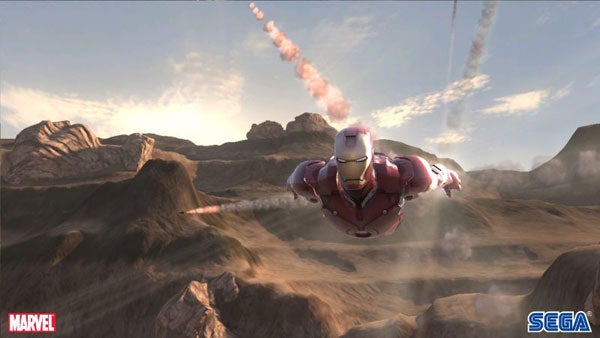 Some of these are apparent right from the start. After the first cut-scene we kick into arms tycoon Tony Stark’s escape from a middle-Eastern terrorist compound in his prototype metal suit. It’s a rotten level that rapidly exposes the worst aspects of the game: fiddly controls, a ropey and unintuitive targeting system, woeful enemy AI and repetitive death-blow animations. To make things worse, you’re tethered to the ground and surrounded by canyon walls for the duration. You can understand why some of the game’s various issues proved difficult to solve – with hovering, flying, close-combat, evasive manoeuvres and three different weapons systems to control, there was bound to be a bit of trouble getting it all mapped onto a joypad. All the same, Sega’s solutions have made the game very difficult to get to grips with. For the first two hours you’ll struggle with the basics of flying and hovering. Several hours after that, you’ll still find it hard to keep fast-moving targets in your sights. Those looking for a dumbed-down, casual game won’t like this one bit.

The animations thing, meanwhile, is just inexcusable. Press B when near an enemy trooper, tank, missile launcher or even helicopter and Iron Man grapples with it, enabling you – by hammering the B button – to wreck it in a single go. However, only one animation has been canned for each type of enemy. By the end of the game, you’re going to be pretty sick of that shot of Iron Man tearing the top off a tank. 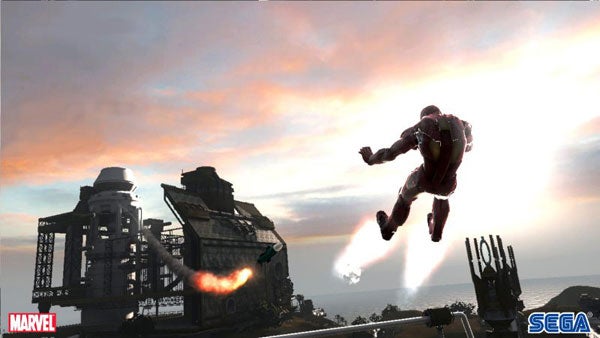 The second level isn’t much better. You’re out in the city trying out your suit and beating up on drones when the new, peace-loving Stark Industries is attacked by one of your old clients. Defeating troops, tanks and drones is a pretty tiresome affair and the helicopter gunship that passes as a boss is stupidly anticlimactic. By this point, I’d pretty much written Iron Man off.


However, by level three something clicks into place. Instead of a small map you get a large desert battlefield with several enemy installations guarding caches of Stark weapons. There are more defensive emplacements to destroy and tanks to battle, and the missions begin to take on a more dynamic feel. In these large spaces the game begins to find its feet: the scale of the destruction and the focus on flight seems to make sense, and there’s even a tactical element in terms of prioritising targets and working your way through the defences. The following levels, with assaults on enemy strongholds and a formidable flying fortress run along similar lines. Suddenly Iron Man doesn’t feel like a complete disaster, after all. 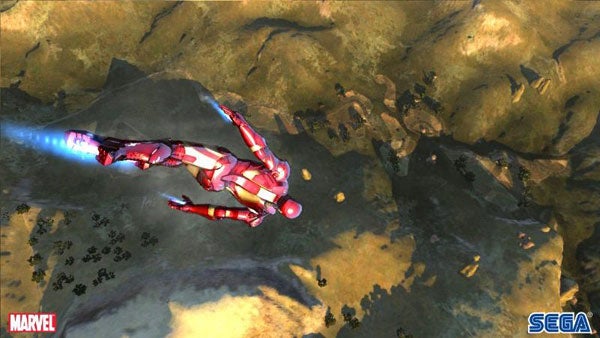 What’s more, the initially underwhelming graphics also show signs of improvement. In the desert and urban environments of the first two levels you’re struck by the lack of detail in everything else but the suit – which looks almost as fantastic as it does in the movie. Where’s the traffic in the city? Where have the population got to? In the larger battlefields there’s still not a whole lot in the way of scenic grandeur, but with so many tanks and helicopters to tear apart and plenty of destructive potential in your armour, it makes a fine blank canvas on which to paint great blossoms of fire and shattered metal. 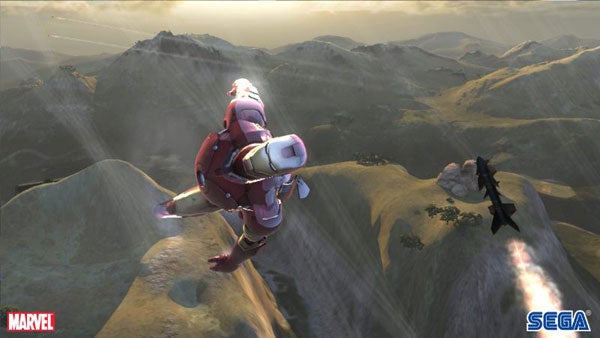 Flying at speed over hills, under bridges and through deep gorges can be exhilarating, and the more the missions make you work the map, travelling rapidly to stop missiles or catch a fleeing convoy, the more enjoyable the game gets. It’s a shame that the engine doesn’t acquit itself quite so well in the cut-scenes – Robert Downey Jnr is robotic, Gwyneth Paltrow has never looked so unattractive – but in-game it does a decent job.

But the sad fact is that Iron Man still fails to deliver a really solid game. First, it seems to have no sensible way of gauging how many enemy units to throw at you at any one time. In some missions this isn’t a problem – by picking off missile and gun emplacements and downing helicopters at your leisure, you can keep on top of the opposing forces and soften up your main objectives. In others, however, it’s disastrous, particularly when timed objectives are involved. Because you can’t waste valuable seconds taking out the SAM launchers, fighter jets or helicopter gunships as you go, you face a constant barrage of missiles that threaten to grind you down before you can destroy the next target. Being careful about your approach can help here, but that’s not always possible. The result is that, while you can usually complete the main objectives in a mission you’ll often fail the optional ‘hero’ objective because there’s no way you can stop all three missiles or destroy the sky fortress before it crashes into a city. You’ll be too busy sucking up the constant barrage from your foes. 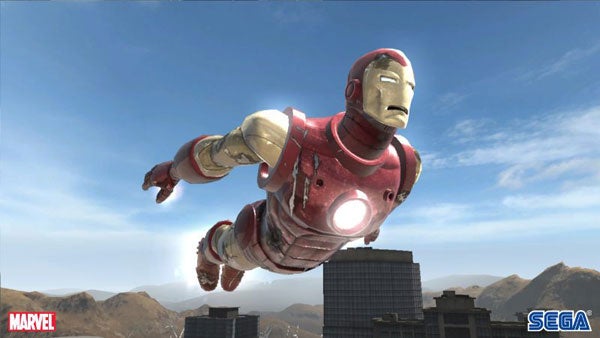 Worse, Iron Man has a tendency to throw in suped-up boss encounters at the very end of a level. You work your way through your objectives, playing things safe and smart, only to run into some git who can blast you out of commission with only a couple of shots. Our hero can be downed three times before going out for the count, but as the suit ‘reboots’ where you went down, this can still leave you right in the danger area. In any game this would be annoying, but in a game with no mid-mission checkpoints it’s infuriating. Do your really want to tackle the same ten minutes of gameplay five times over just because you can’t defeat the boss at the end? No? Well stick to Easy mode on this one, then, or you’ll find yourself climbing up the walls.


If you’re really stuck there is one way to get an advantage. Between each mission you can buy upgrades for your suit, boosting your energy levels, defensive and offensive systems and manoeuvrability using dollars earned in combat. You’ll earn some dollars with each victory, but probably not enough to make a huge difference. The secret becomes, therefore, repeating missions so that you can grind for a while and level up your suit. Was this ever an acceptable way to counter an excessive difficulty level? Not really. Is it OK in this day and age? No. No. Nope.


The more the game goes on, the more repetitive the basic tank-busting/chopper-grappling gameplay gets, the more irritating the boss battles and optional objectives become, and the less inclined you are to overlook the twitchy controls and tired death-blow animations. In fact, it becomes more and more apparent that, beyond the basic concept, the development team didn’t really have any great ideas about how to take things much further. This even becomes apparent in the provision of additional game modes. There’s no online multiplayer, even though the gameplay clearly lends itself to it, and nothing else bar a series of ‘one man army’ challenges where you can acquire famous Iron Man suits from comic-book history by defeating a set number of enemies on battlefields drawn from the story campaign. Basically, you get more of the stuff you’ve already lost interest in, leaving you wondering whether the development team had similar feelings as the release date began to loom near. 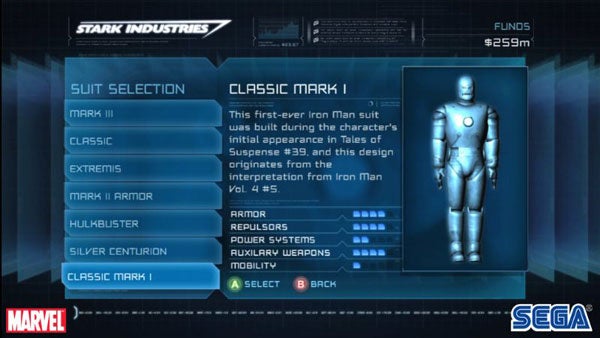 In short, we have another game of the movie of the comic-book that falls short. It might not do so for the usual reasons – join-the-dots concepts, brain-dead gameplay and technical incompetence – but it does so all the same. Iron Man is both too complex for the casual audience that laps up movie adaptations and too lacking in polish and depth for the more hardcore gamer who might enjoy the open battlefield style of gameplay. As a result, it’s hard to imagine anyone who would buy it and go away feeling pleased. Don’t get stuck with this lump of old iron – keep your wallet in your pocket until something more engaging comes along.


Technically competent and the action has its moments. Sadly, poor controls and some duff design decisions keep another super-hero from getting off the ground.