iRobot Roomba 880 – How does it cope with corners and obstacles?

Back in the day, the original Roomba navigated in a completely random pattern and simply bounced off obstacles in a different direction. At first you would think the Roomba 880 is doing exactly the same, but watch it for a while and things have clearly moved on. While the initial cleaning pattern still looks random, definite patterns appear in the motion and if you pick an area of floor sooner or later the Roomba passes over it.

It does, however, collide with most obstacles at first – walls, corners, chair legs and larger daily debris on the floor, such as a stack of books for example. It approached with some speed and slows as the sprung bumper pushes towards the body, damping the impact a little if not entirely. From an adjacent room the continued thump, thump, thump of it hitting the turned wooden legs of the sofa and arm chairs was enough to get us looking for potential damage.

Thankfully, it appears that this is more noise of the bumper than the actual impact as no damage was obvious, even after a couple of weeks of testing. Moreover, the Roomba 880 soon learns where many of the bigger obstacles are, stopping an inch or so from them and navigating around them on subsequent passes.

Even if it does continue to meet with edges and obstacles, it seems to slow a little before impact. In fact, edges are one of the Roomba’s strong points as it tracks walls well, always going anticlockwise around your room to ensure its single side brush is against the wall. Driven right into a corner the brush can’t quite get to the very apex, but it does offer a good corner cleaning effort for the breed.

Both of the Virtual Wall gadgets worked very effectively and unlike the traditional magnetic tape used by some alternatives, it can be left in place between cleans without looking like an eye-sore or becoming a trip hazard.

The Roomba 880 also handles the transition between hard floors and the rug with ease, simply bumping up onto it with each pass. The bumper design would limit the height it will climb to about 20mm, but if your rug was much deeper than that the pile would not be suitable for this cleaner anyway.

While the counter-rotating brushes do pick up well and neatly avoiding tangling in most situations, we would not recommend use on deep pile carpets as the grabbing and pulling action could lead to damage over time.

Straight out of its dock, the Roomba 800 heads off in a seemingly random direction until it bumps into the first obstacle. The noise is fairly loud although it is more of a mechanical noise from the brushes that a traditional vacuum cleaner roars. Bumping up onto the test rug with ease it effectively cleaned the short pile of powder, albeit leaving a faint trail. Thankfully this trail disappeared over time as the machine went back and criss-crossed the area again.

This would have been an absolutely top result for the iRobot, had it not missed a small strip to the bottom left of the carpet. It went across this area once but not again in the opposite direction, leaving an obvious mark. Interestingly, we set the Roomba again the next day and it took a completely different route in which it did clean this area, proving that if used regularly it will cover the entire room, just not 100% in the first outing.

While all of our test robots struggle to completely clear the fine powder on hard floors, the Roomba 880 made a good job of getting up the worst of the actual dust. However, significant powder ‘stain’ remained in all cases in which you can see the tracks made as the Roomba ran over it. Models with brushes seem to cope with this type of stain/debris better that the Roomba’s dual rubber rollers.

Conversely, large debris such as small grit and pebbles (brought into the house in shoe treads) was easily collected along with dog’s hairs and the surprise yogurt pot lid. If a big heap of debris was discovered, such as the test powder, the Roomba made several passes.

Runs around the room perimeter proved good for edge cleaning on the hard floor. The 880’s side brush rotates markedly slower than the competitors and effectively pushes debris into the path of the cleaner rather than jettisoning it out to the side.

When if finds a corner it shuffles in as best it can and does a fairly good job of cleaning the area save a small triangle right in the corner. The machine also ran a very long time between charges – over two hours. Given the nature of the set-up and scheduled cleaning we would rather see more powerful suction and shorter run times. 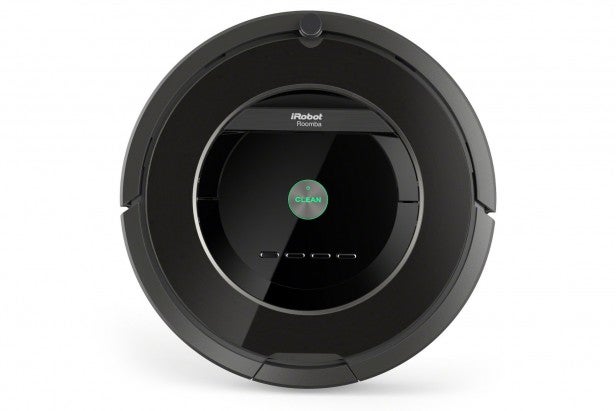 Should I buy the iRobot Roomba 880?

Like most robot vacs, the Roomba 880 is not without its flaws. Its suction is not great despite the high efficiency vacuum, the rubber rollers don’t pick up fine powder dust and the random navigation with bump-steering looks rather clunky compared to more sophisticated laser-sensor tracking models.

That said, the company’s experience in the area shines through with good design, great accessories and good cleaning on both hard floors and carpets. We’d recommend looking at the Miele RX1 as well if you’re determined to buy a robot vacuum cleaner, but this is one of the better ones around.

An above average robot vacuum cleaner, but it’s by no means perfect.