Robot vacuum cleaners have been around for quite a while now and a number of companies have given them a go. However, just as Hoover has come to be an everyday word for a regular vacuum cleaner, there’s one company that has managed to become synonymous with robot vacuum cleaners and that company is iRobot. Or more specifically that product is the Roomba.

Now in its third generation, the Roomba is available in four models, the 581, 563, 555 and 520, which are differentiated by former’s ability to be scheduled and that the latter comes with no Virtual Walls. The Virtual Wall lighthouses emit an infra red beam and are used to electromagnetically cordon off the area you’d like the Roomba to work within. All three Roombas can apparently clean up to four rooms on a single charge and will return to their docking stations when finished or low on battery. We’re looking at the 520 model today.


Compared to the Samsung Navibot SR8855 the Roomba 520 seems much more petite. At 340 x 340 x 90mm it’s actually only 15mm shorter and 10mm narrower, but it certainly looks considerably smaller. It’s also more sensibly decorated with just a matt creamy white finish to most of the body and a matt silver top. This means it should hide most scratches and grime better than the shiny plastic of the Navibot. It also has a rather neat extra, that being a handle that’s incorporated into the top. 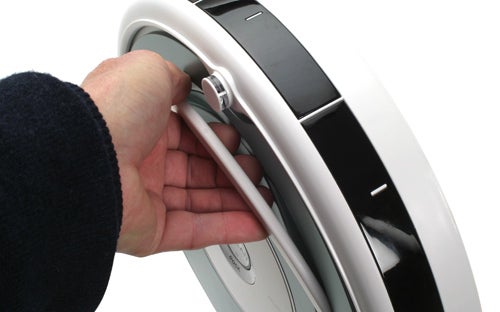 Overall build quality also seems decent with two strong, deeply sprung rubber wheels propelling the Roomba along, a sturdy looking cleaning mechanism and generally tough plastics used throughout. That said, aside from its shiny plastic, the Samsung Navibot did seem to be a step up with a hefty rubber section running round the bot’s edge, more substantial rotor brushes (not to mention the Samsung also has two of these), and a more sophisticated main brush. Also the Roomba’s docking station feels distinctly flimsy – not ideal for something that’s going to spend its time sat on a floor.


The fact the Roomba only has one brush is a clue to the major difference between it and the Samsung Navibot, and indeed many of these other robot vacuum cleaners. You see, the Roomba doesn’t map out its course round a room but merely obeys a few simple rules that by hook or by crook means it should cover the whole area of a floor. Where the rotor comes in is that one of the Roomba’s rules is wall following. Using its front and side mounted sensors the Roomba will track along any walls or obstacles that it encounters to ensure its rotor can get right into the corner and prize out all the dirt. 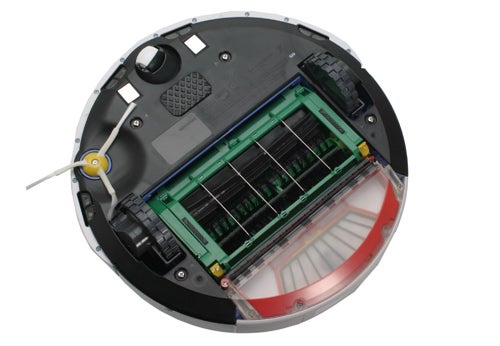 The other rules are spiralling, room crossing and dirt detection. The first of these, as it suggests, makes the Roomba move in an ever expanding spiral until it hits something. This is its main technique for covering large areas. Room crossing then makes the Roomba criss cross the room to ensure it covers the whole room. Finally, dirt detection will cause the Roomba to stop whatever else it was doing and spiral round an area it thinks is dirty (e.g. Paris Hilton – ed).

Looking then at how the Roomba performs, its lower height and slimmer width meant it could get in and under things that the Samsung Navibot couldn’t. Thanks to its edge tracking feature it also has a more persistent attitude towards obstacles; whereas the Samsung would simple turn round as soon as it bumped into an obstacle, the Roomba has a good old go at getting itself in and around the object. This was particularly effective for chair and table legs, though at one point it did manage to get itself under the legs of a wheeled office chair and failed miserably to get itself back out again.

The edge cleaning also means the Roomba does a much more thorough job than the Samsung, which consistently left a strip of dirt several inches wide around the edge of room. However, this was only true for if you left the Roomba to its own devices in a fairly clutter free single room. More complicated layouts completely flummoxed the simple navigation rules leaving the Roomba completely lost.


To test it we let the Roomba loose in a flat, which consists of an open plan living room (well stocked with dining table, sofa, arm chair, tv, etc) and kitchen, a dogleg hall way, a couple of bedrooms, and a couple of bathrooms. Starting in the living room, it covered about half the living room before heading off down the hallway where it preceded to trundle up and down the same area at least half a dozen times before letting out a rather cute whimpering beep to indicate it had run out of battery (it obviously hadn’t been full).


Returning it to its dock to charge then setting it off in a different direction, it did the other half of the living room but then got stuck in a loop going from arm chair to sofa to clothes drying rack (where it would go round in circles for a few minutes as it tried to get out from under the legs) then back again. Quite simply, if you have a remotely complicated house setup then the Roomba will simply not be able to clean the whole lot.

What makes this worse is the docking station requires the Roomba to have line of site – it just uses infra red – to guide it home. So if you set the Roomba going and it gets a bit stuck you’re almost guaranteed to still have a dirty house and a dead Roomba cluttering your hallway. In contrast, the Samsung Navibot flawlessly cleaned the entire flat (edges not withstanding) and found its way back to its dock to charge completely unsupervised.


The final death knell for the Roomba 520 is that like the Samsung it doesn’t actually do all that great a job of picking up dirt. Sure, it picks up loose stuff from hard floors and short carpets but if you want a proper clean you’re still going to need a decent vacuum cleaner. So, despite being only £250, we can think of very few people we’d recommend the Roomba to bar those with the most sparse and simply laid out flats. 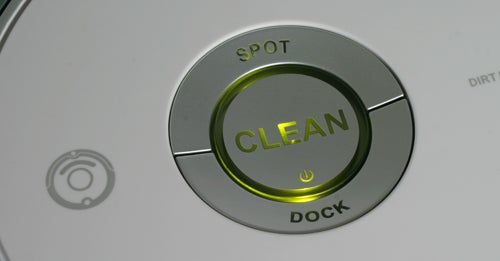 One small plus point is iRobot actively encourages people to play around with and program their Roomba’s and there’s a thriving community of people doing just that. So if you fancy turning your Roomba into something more useful then the option’s there.


Despite being the poster child of the robot vacuum cleaning scene, the iRobot Roomba, or at least the i520 version we’ve looked at here, simply isn’t up to the job of cleaning most people’s homes. It may be cheaper than the competition, but it also pales in comparison. If you’ve only got £250 to spend on a vacuum cleaner, just get a manual one!