There’s an interesting story behind the U10. Apparently, the head honcho at iRiver got together the whole design and engineering team back at base in Korea and told them to that they needed to change their thinking. He told them to go back to the drawing board and come up with something new – to make a complete U-turn with their thinking. U-Turn – U10, geddit.


It was a sensible idea. iRiver’s range of largely me-too MP3 players were dull but worthy but there was no chance that these types of products were ever going to make any inroads on Apple’s market share. Having said that, last year’s N10, was one of the most stylish players ever, so there were previous signs that iRiver could come up with special products.. 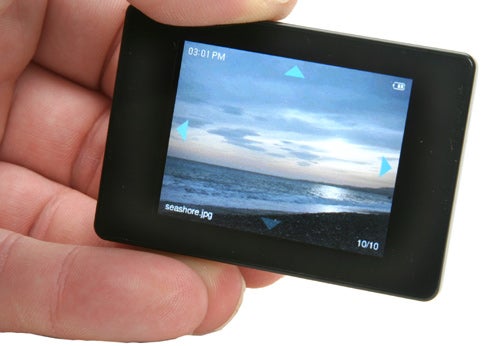 And if there’s one thing the U10 is, it’s certainly different. The player is an oblong shaped device and measures 69 x 47 x 16 mm. It’s thicker than an iPod nano but shorter. Compared to the 42g nano, it is bulky though and at 70g, noticeably heavier.


The first time you plug in the player it will charge, taking one hour to fill up to 50 per cent, and 2.5 hours to charge fully. Playback for audio only is rated at a chunky 20 hours. 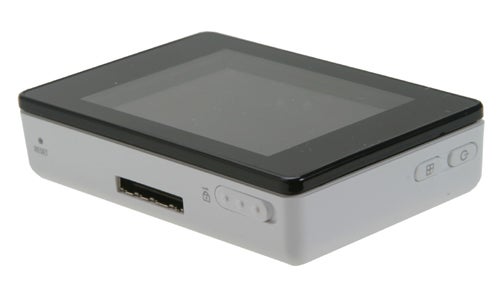 The intrigued aspect of it is that the device has a 2.2in, 320 x 240 screen that can display 260,000 colours – and that’s it. Rather than being festooned with myriad small buttons to small to press, all the navigation buttons are part of the screen. You press at the top of the screen for left, at the right to move right and guess where to move up and down. It’s a similar concept to the buttons integrated into the iPod’s click-wheel. One issue though is that the size of the screen is actually deceptive as the edges are devoted to the buttons and frame the 320 x 240 resolution screen. The only thing is that with the constant pressing on the screen, you almost need to carry a cleaning cloth with the player at all times otherwise the screen gets covered in finger prints.

There are some buttons – the power switch on the right and beneath that a button that toggles the screen between landscape and portrait mode and two small buttons for volume up and down. Underneath there’s a hold button, and a small reset switch, which I didn’t have need for during my time with the player. To get advanced options you press and hold on the right button and you do the same to get back to the currently playing track when you’re in a different menu. For a flashed based player it does take a tad too long to turn on, and the animations make navigation a bit on the sluggish side, though there is a setting to speed this up. 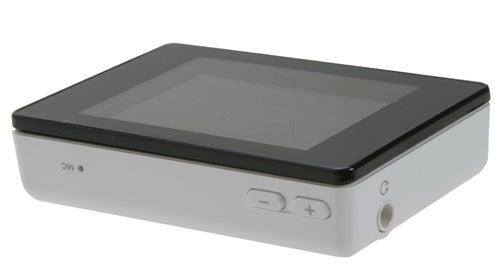 The player is undeniably awash with features. On the audio side first and foremost it will play MP3, WMA, ASF and the ultra efficient OGG. Only the Apple flavoured AAC is conspicuous by its absence, though that’s hardly surprising. It can also record to MP3, either from the built-in microphone or from the built-in FM radio, a feature only just released by Apple and even then, only as an external accessory. It can also play back video, though admittedly only at 15 frames per second.


However, for all its good work in features, design and navigation, iRiver falls down for the same reason that every other PC focussed manufacturer does – getting content onto the device itself. The U10 uses no less than three different methods. 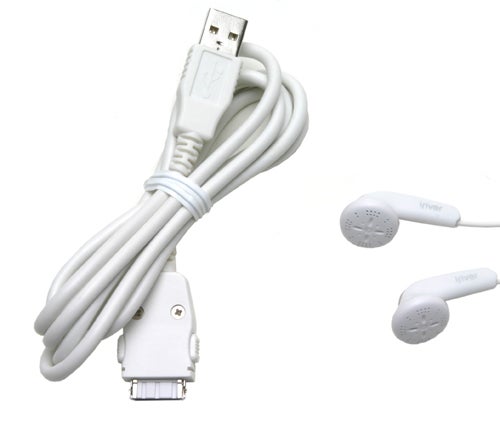 Firstly, music is transferred over using Windows Media Player. To be fair, this works quite well. WMP might not be as good as iTunes, but once you get to know its quirks you’ll be transferring your tracks in no time. However, if you want to transfer pictures you have to use the supplied application called Picture Plus. This is because pictures need to be converted to a proprietary format rather than just copied over. The software does enable you to place pictures in their own folders and when you copy your pictures over the EXIF information contained in the file is displayed too.

Video’s on the other hand are copied over using Windows Explorer. For some inexplicable reason the video folder is not a sub-folder of the Media folder, but is in the Data folder. Surely, video is media? The iRiver can only play back video in a very specific avi format and rather short-sightedly, no utility is supplied to convert video. There is however, a third party app called iriverter, available here, that will do the job. It doesn’t yet have any profiles for the U10 but if does work. Choose a profile for one of the other devices and set the resolution to 320 x 240, the fps to 15, the video bit-rate to 384Kbps or less and the audio to 128Kbps or less. Having done this, a 693MB movies was converted to 320MB, so you can fit a couple of movies on the 1GB player and have room for music and pictures. However the screen is so small, so watching shorter things like the Simpsons might be more suitable. 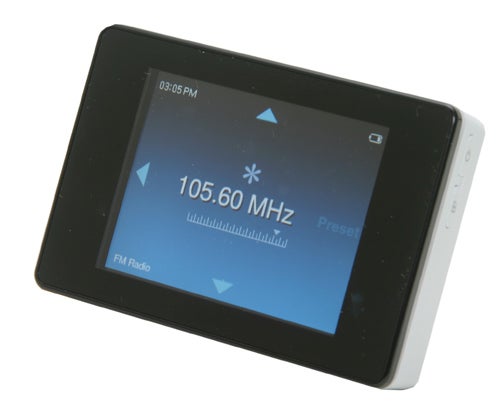 FM radio quality was as good as can be expected and navigating stations was easy. Press up and down to scroll through the frequencies manually or hold down to switch between presets. Recording was easy but there was no way of playing back the recording on the device itself – it could only be accessed once connected to a PC.


There are six flash games on the device and while there not exactly PSP quality games, they are mildly diverting fodder, such as a Space Invaders clone, Sodoku, and one where you have to keep a fat man from falling off a log. (That’s not a metaphor, that’s literal). They are though, better than the ones on the iPod.


Sound quality wise I was as impressed as ever by iRiver and the U10 sounded loud, clear and accurate. The screen was also good, with bright, vibrant colours for photos and text is clear. However, this is only if you look straight on. Angle it either up or down or to the side and the colours immediately become washed out. It could also do with a touch more contrast and dark scenes in videos are hard to make out. 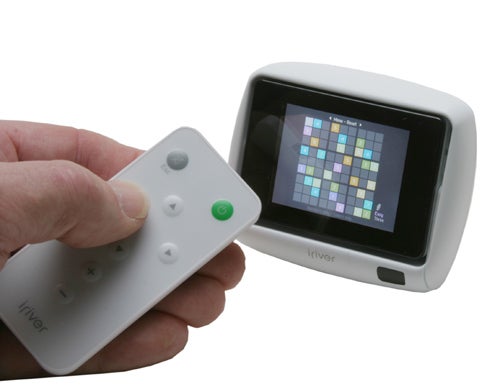 In addition to the player itself, iRiver has an optional cradle that costs £40. With the U10 housed inside it looks very much like a miniature television from the 50s. The cradle has a remote control and if you plug some speakers into the line out, you can listen and control your music from a distance. There’s even a line-in on the cradle and the U10 will then encode direct to MP3. a cool feature is snooze button on top of the cradle so you can use it as alarm clock and wake up to a track or the radio.

There’s no doubt that the U10 is a player brimming with features. I can’t think of anything this size that can do so much. However, you have to pay for the privilege. The 1GB player is £140, the same as a 2GB iPod nano and £20 more will buy you an 8GB Creative Zen MicroPhoto, though that has a small screen and can’t play video. Feature wise, the iRiver wins with FM radio and video playback, but with the latter, the 2GB version would be more useful and that will set you back £190 when it’s released. While the U10 itself scores highly for usability, as ever, the non-Apple product loses out as a complete user experience. iRiver needs to sit down and create an iTunes rival to consolidate the three different applications and Windows Explorer that are currently required to get content onto the player. 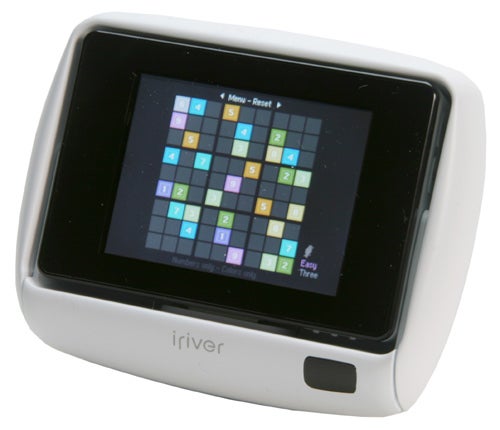 This issue means that while the U10 might be eye catching, you’ll need to be on the techie side to actually make the most of this player. Buy this for your non-techie Dad for his birthday and you’d do well to include the receipt. For the more technically confident and patient though, this is a great alternative to the nano. It looks good, it sounds great and is the more capable device. And ever since, ‘Thinking Different’ meant thinking the same as everyone else, it even has greater gadget appeal.


The U10 has an innovative interface that works well and is feature laden, with music, pictures, video, text, radio and games in one tiny package. The downsides are the relatively high price for the capacity and the clumsy method of getting content onto the device. Get past those, and the U10 is a winner that just might take a few sales from the iPod nano.