While eBook readers are very much the in thing right now, it’s still a segment of gadgetry reserved mainly for well-heeled early adopters. Sony has been preparing the ground for some time, the PRS-600 Reader Touch Edition being its third effort, and Amazon continues its attempt to “do an Apple” with its Kindle and accompanying proprietary online store, but ask regular folk whether they’d pay upward of £200 for something to read books on and they’d probably laugh in your face. That’s fine, eBooks aren’t for everyone, but for those that are interested the choice of readers continues to grow: the iRiver Story being the latest. 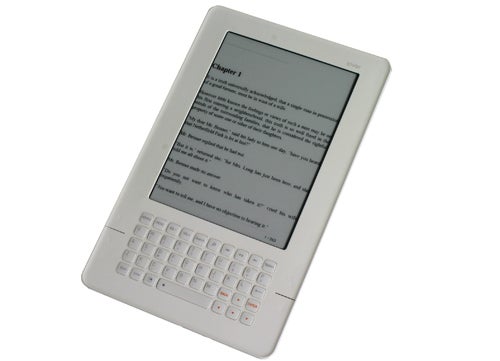 Cracking open the smart, if slightly over engineered, gift box packaging reveals a device not dissimilar in appearance to the Kindle. Clad entirely in smooth, matt white plastic, there’s a QWERTY keyboard beneath a six-inch, 800 x 600 e-Ink display. Flanking both are two sets of forward and back buttons, the presence of which make it possible to use the Story in both portrait and landscape modes.


A glance at the bottom edge reveals a headphone jack, power/lock switch and (behind a flap) a mini-USB port and an SD card reader. We particularly like the latter addition, not least in light of the presence of 2GB of integrated storage as well. At the back of the Story, meanwhile, is a thin slit inside which sits an integrated speaker for listening to audio books and potentially recorded memos created using the integrated microphone.


Recording memos is one of a number of almost useful extra features, such as a calendar and a written memo application. We’re not against such additions per se, but since there’s no way to synchronise these with any other service (Outlook, Google etc) or device, it’s hard to see anyone using them seriously.

Music playback, however, is a very worthwhile feature. While the Story itself is a little too large to replace a portable media player/MP3 Player and its music player a little too basic, lacking a library system and meta tag support, it’s perfect for listening to audio books. And, since there’s an integrated speaker, you can listen to books aloud before you go to bed or anywhere private. It’s just a shame there’s no bookmark feature for audio files, or the ability to queue a single chapter lest you fall asleep and leave the player running through the night!


Another small concern is the build quality. It might look similar to the Kindle, but the Story isn’t similarly well-made. Flexing the plastic shell a little reveals it’s exactly that, a plastic shell. It creaks disconcertingly and generally feels a little hollow and flimsy. If you treat it well you’re unlikely to have any problems, but it’s a far cry from the metal Sony readers and iRiver doesn’t include a carry case in the box, instead selling it separately.

After the frustrations of Amazon’s proprietary format on the Kindle (must we go through this every time a new segment emerges?), it’s good to see a device that falls into line with others in the market. Most importantly this means support for ePub files, the most common eBook format, as well as formats like PDF, DOC, TXT and even (unusually) PPT files from PowerPoint and XLS files from Excel. 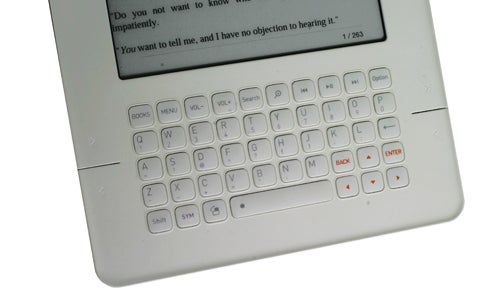 This wide file support is great, but the usual caveats apply in their production. Like most eBook readers, the Story struggles to display PDF files in a readable, practical way unless they’re formatted specifically for the resolution of the display. PPT and XLS files, meanwhile, can’t be zoomed into and TXT files are justified with words wrapping across lines. All of which means, while useful for occasional use, you’ll want to stick to ePub files where possible and convert compatible files into this format. iRiver has also added a comic book/graphic novel reader, supporting JPEG and BMP files contained within ZIP files – a niche feature, no doubt, but some are bound to approve.


When using the ePub format, reading books is a very good experience. Text is sharp and readable and though refresh rates aren’t instant, they’re no worse than on any other eBook reader – no one has eliminated this problem as yet. One slight problem, however, is that very strong elements on the page (e.g. bold text, dark shaded images and menus) can sometimes linger even after they’re no longer present on the page. It’s not a serious problem and doesn’t really distract from the overall experience, but it’s noticeable nonetheless. 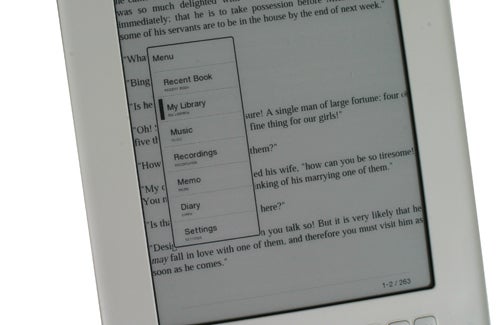 Of greater concern are some of the navigational shortcomings. Basics are covered perfectly well: all of the page turning buttons are responsive and fall neatly under your thumb. A helpfully highlighted ‘options’ button, meanwhile, pops up a menu in the right corner to allow you to bookmark a page or ‘move to page’.


It’s the latter element where the problems begin. Despite having a QWERTY keyboard with numbers available as alternate actions, you can’t enter a specific page number! Instead you must use the arrow buttons to scroll through them, which strikes us as alarmingly inefficient. Another annoyance is the said options menu doesn’t rotate when you’re in landscape mode, a fact that’s true of the zoom dialog box as well.


There are all sorts of similar small niggles. Titles in the ‘Books’ menu are simply listed, rather than being sorted by author or title. Fine if you’ve only got a small selection of books, but hardly ideal as your collection grows. If you do want to view your books in this fashion you must organise them yourself in the folder structure and then navigate to them via the ‘My Folders’ menu. iRiver does at least make use of the of the keyboard here, allowing you to search your collection to find the book you want, but it’s one of the few times when said keyboard comes in useful.

One area the Story is particularly strong, however, is battery life. iRiver quotes battery life of around 9,000 page views, 20 hours of music playback and five hours of audio recording. Unsurprisingly we didn’t make much of a dent in these claims, even after two weeks of daily use our unit is still showing a full set of bars, but assuming these claims are correct the Story is among the longest lasting readers on the market.

Ultimately, then, the Story’s generous feature set and excellent battery life aren’t enough to eclipse its somewhat flimsy interface, which hints at a product that’s still in the experimental phase. All the basics are here and most of them executed well enough, but the Story lacks the finer details to bring them together. Moreover, iRiver appears to have taken a lot of inspiration from Amazon’s Kindle without truly appreciating why it’s a good piece of hardware.


The keyboard is the perfect illustration of this point. The Kindle has one so you can search for, purchase and download books and newspapers using the online service. On the Story it’s only useful for the Diary and Memo applications, neither of which are themselves that useful, or searching your library for books – a feature that would be less essential were said books organised properly. 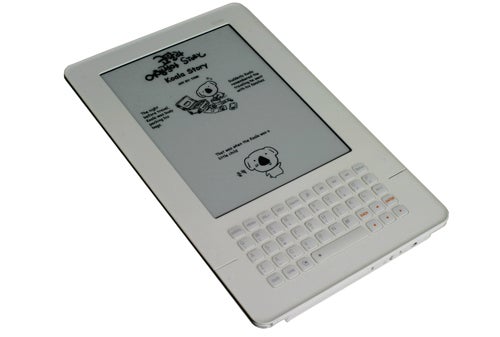 None of these issues prevent the iRiver Story from being a solid, usable eBook reader that benefits from generous integrated storage. However, even with its superior integrated memory considered, it’s an inferior effort when compared to the likes of the Sony PRS-505. It may have a meagre 256MB on-board memory, but this can be expanded using memory cards and it is significantly better looking, more durable and, at £169.99, cheaper. Alternatively there’s the PRS-600, Sony’s new touchscreen eBook reader. It’s a little more expensive, retailing for around £240 at the moment, but whichever way you choose to go you’ll be getting a better product.


As first attempts go, the iRiver Story is merit-worthy, but it’s got that unmistakable air of a work in progress. If iRiver’s record in the MP3 player market is anything to go by it’ll get it right sooner or later, but until then Sony’s range of devices remain the benchmark to follow.