Hats off to iRiver, while other personal media player manufacturers seem content to merely follow wherever Apple leads, the Korean company can barely go a month without trying out a new form factor or a new style of GUI. The Spinn is a case in point; pitched somewhere between the iPod nano and the iPod touch, it looks like an elegant, stripped back take on the PMP but turns out to have a slick and innovative interface and some interesting features of its own.

As with iRiver’s previous high points – the Clix 2 and the Lplayer – the Spinn manages its steamlined design by employing a touchscreen interface, the only obvious physical controls being a power button and a volume control on the left-hand side and a lock slider and ‘back’ button on the top. It’s a well-built and very pocketable unit, around 11mm thick and weighing in at just under 70g, and it looks a little like a brushed steel door hinge, though the majority of the body is actually plastic. Frankly, it’s understated but gorgeous. The Spinn’s clever secret – and the rationale behind the name – lies in the rounded edge to the right of the 3.3in Active Matrix OLED screen. The top part is what iRiver calls the Spinn System Analog Wheel. It’s this, rather than the touchscreen, that you’ll spend most of your time using when you want to get to grips with the Spinn. 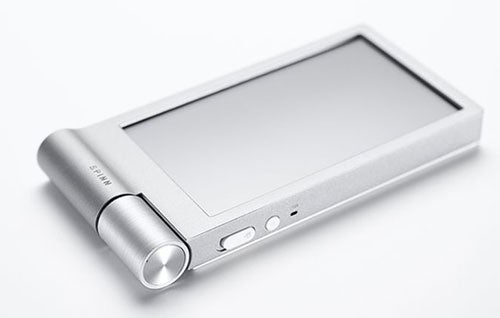 Together with a slick, horizontally scrolling interface, you rotate the wheel with thumb and fingers to twitch back and forth between the player’s different functions or skip backwards and forwards through tracks on an album, clicking it downwards to select. It’s also the wheel you’ll reach for when you need to scroll up and down through menus of option settings or the usual album and artist lists (a variant of the iPod’s CoverFlow interface would have made even more sense here, but the list style works perfectly well). If you want to select a particular option without scrolling through, you can also press it on the touchscreen, and there are option menus and onscreen controls that you can access that way if you prefer. The GUI matches the design of the player by combining text with nice, clean fonts and rather sparse-looking, vector-based icons in a cool, modern style. It’s a good looking, logical and usable interface, and a vibration feature adds a nice layer of tactile feedback when you select an option or reach the end of a particular list or menu. 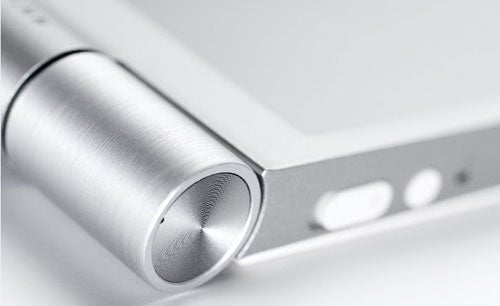 Admittedly, while the wheel proves a responsive and intuitive control the touchscreen is less so; the panel could do with being just a bit more sensitive, and iRiver could still be a little more imaginative with ways of using touch to flick through albums, videos or photos. However, the only serious issue here is that the Spinn can’t really be used one-handed. You can just about hold the player vertically and work with the wheel and back button in this way, but it’s a bit of a hit and miss affair. Personally, I don’t think this is a huge problem, but it’s one area where the non-touch iPods and some of Creative and SanDisk’s players still have an edge.

Still, the Spinn has plenty of other things going for it, not least the screen. It’s not quite as bright as the screen on the iPod touch, but it’s certainly bright enough. With a 480 x 272 resolution packed into the 3.2in panel, clarity is good, and the display is just big enough to make the Spinn a functional photo viewer and video player without compromising its pocket-friendliness. The only problem is that it’s also quite reflective. If used in strong ambient lighting, you might struggle to follow what’s happening in the frame, particularly if the colours are muted or the sequence dark. On the plus side, playback quality is really very good for such a small device. Provided your video files are converted properly, you’ll get smooth motion, solid detail and punchy sound. I’m still not sure I’d want to watch a whole movie, but I could certainly handle a decent episode of my favourite American shows. 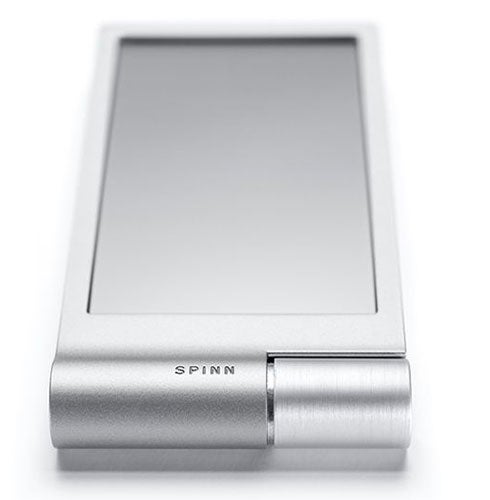 The Spinn isn’t short of functions, either. Sadly, it looks like European buyers will have to do without the digital TV and radio features that Far-Eastern Spinn owners can enjoy, but we do get FM radio, voice recording, a text viewer, a decent photo viewer and –like the Clix before – the option to play Flash Lite 2.1 based games. Unfortunately, I wasn’t able to try these out during testing, but a selection is available from an affiliated website (www.smashingcontent.com). 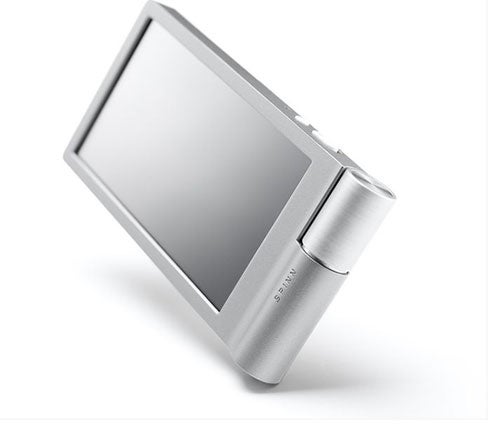 Chiefly, though, people will still be using the Spinn as a music player, and here it excels. As with the Clix 2 and the Lplayer, sound quality is excellent with a bright top end, plenty of mid-range body and a strong line in thumping bass. Play the ubiquitous Timbaland remix of OneRepublic’s Apologize and the precision of the mix is wonderfully evident, each layer of vocals and instrumentation perfectly audible and perfectly in place. This is a track that sounds good on my own iPod touch, but takes on a new life with the extra volume and power of the Spinn. The same stands with God is an Astronaut’s slow-building post-rock instrumental, Fragile. The churning guitar, dark bass and heavy drums swell and blend just as the band intended, and there’s not a hint of murkiness in the sound. Even The Smiths’ This Charming Man – a track that can sound over-bright or even tinny on a lesser MP3 player – sounds nice and meaty. Even more impressively, you get a decent tone through the supplied earbuds, though the Spinn will also do justice to more expensive phones, including the Denon AHC-551s I’ve been using for reference. If you want to move up from earphones to proper headphones, the Spinn also has the power to make that work.

What’s more, the sound is very readily customisable, with a fully configurable EQ setting and a selection of SRS WOW processing options that allow you to widen the soundstage or further define the already very crisp sound. As always, these options are best used with caution – go too far and the tone takes on a slightly unpleasant, over-processed quality – but if you can’t get a sound you like from the Spinn then you’re probably doing something wrong. 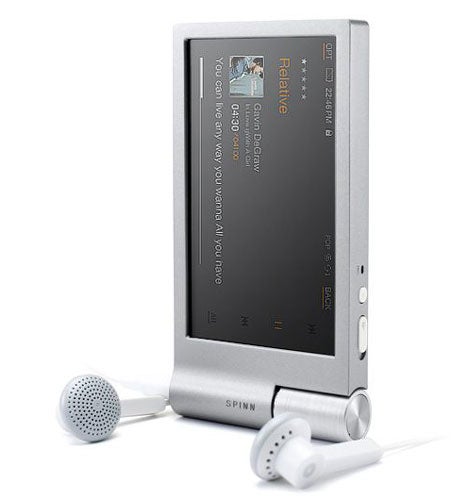 The good news isn’t over yet. Format support is another strength, with the Spinn supporting MP3, WMA, OGG Vorbis and the lossless APE and FLAC formats on the audio side, with MPEG4 AVI and WMV on the video side. It’s also supposed to work wirelessly with Bluetooth 2.0 headphones out of the box. Unfortunately, a lack of any such item on the premises prevented me from checking this out. Just one final sore point: a non-standard USB connector is all well and good, but it’s more convenient just to stick with the usual mini-USB, if only because you don’t have to hunt around for the right cable every time you want to connect the player up to your PC. 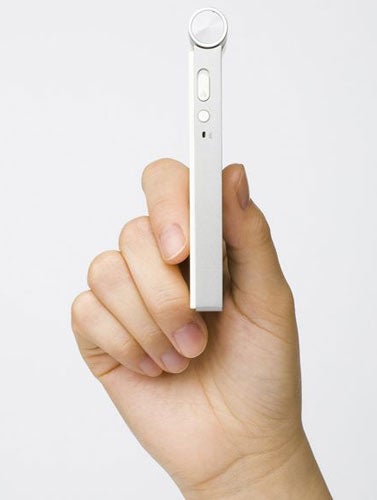 All in all, the Spinn is a strong package; a PMP that can stand proudly with iRiver’s excellent Clix 2 and Lplayer devices. The only thing standing between it and a whopping, two thumbs up recommendation is the existence of those players and the price. Advanced MP3 Players, which will be selling the Spinn in the UK, was unable to give me a final price, but expects the 8GB model to sell for around £149 and the 4GB model for between £109 and £119. The Spinn has a bigger, better screen than the Lplayer, but if you’re more interested in audio rather than video, the Lplayer offers equivalent sound quality and a good, if not so innovative interface at a much lower price. If you want a more versatile but still compact player, however, the Spinn is well worth putting on your shortlist. While the usability isn’t quite perfect, it’s another great player from iRiver.

The Spinn is an excellent an innovative PMP, though it might struggle to find a niche between other compact players and high-end, touchscreen devices like the iPod touch. If you fancy a more versatile widescreen take on the Lplayer and Clix 2, it’s well worth a look.