The Amazon Kindle dominates the ereader market, but it’s not without rivals. The iRiver Cover Story EB05W is an E-ink model backed by high street bookseller Waterstones, and it undercuts the Kindle on price, currently selling for a penny under a hundred pounds – but is it ready to go up against the Sony Reader big boys and the Kindle?


The iRiver Cover Story’s design is quirky – typical of the Korean manufacturer. Its body is white and curvy, with just the multi-function page-turning control to act as a physical controller on its front. It’s not the only navigational tool on offer here though because this ereader is equipped with a touchscreen layer as part of its 6in e-ink screen. It’s a resistive model but there’s a neat pull-out stylus on the reader’s side to help out with touchscreen responsiveness.


It’s the magnetic cover that comes to characterise the design of the Cover Story though – rather than the use of a touchscreen. This cover clings to the back of the reader when in use, but can also be placed on the front, protecting the screen, or alternatively removed altogether. There’s a section cut out of this cover plate, designed to give the speaker room to breathe when on the reader’s back, and to allow for the page-turn rocker when on the front.


The cover is a neat design feature that separates the Cover Story from its rivals, but it does bring a niggle or two with it. When stashed on the device’s back this cover, it tends to move a little in your grasp. This is the fault of the magnetism used to keep it roughly in place rather than a build quality issue, but it does detract from the otherwise very solid feel. 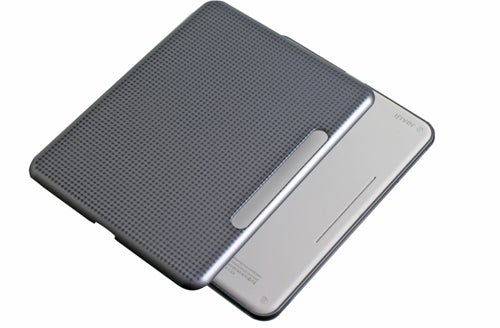 If the cover is aligned so that its opening is over the speaker, your hand naturally rests over this gap too, and it doesn’t feel as comfortable as the smooth surface provided by rotating the cover. The iRiver Cover Story EB05W has several of these flawed features – things designed to enhance the overall experience that end up threatening to trip up the whole enterprise.


We’ll hand it to iRiver on the page navigation though – the rocker is extremely comfortable to use, and will work for lefties as well as right-handed users as there’s an auto-rotate function built-in. At 230g, the Cover Story is light enough to be used comfortably one-handed too, which is what this rocker excels at, letting you flip back and forward between pages without any significant movement of your hand.

The iRiver Cover Story comes with 2GB (1461MB is user-accessible) of internal memory, and while this should easily be enough for most – it’ll house thousands of ebooks (sans pictures) – there’s also a full-size SD card slot on the device’s bottom. It’s hidden underneath a pull-out flap that also hides the miniUSB slot. The bottom end of the EB05W also sports the 3.5mm headphone jack, microphone and power button. Volume controls sit on the left side and a menu button is on top.

If an ereader is used for its primary function, reading books, then even the clunkiest of front-end interfaces needn’t be a deal-breaker. All the ereaders we’ve tested let you resume reading easily, so you only need to skip back to the main menu between novels. The same is true here, but iRiver re-designed its interface for this second-gen ereader. 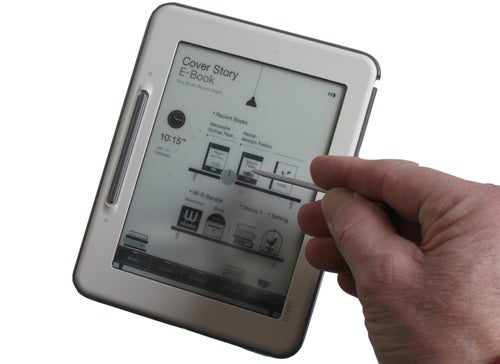 The iRiver Cover Story offers two main menu looks to choose from, and they’re both designed to be operated using the touchscreen. They’re single screens that offer shortcuts to all the ereader’s main functions, including your books library, comics, the Waterstones bookstore, E-mail, your media library and the settings menu. It would all seem rather slick if navigation wasn’t held back so much by the slow processor.


Your initial impression may be that the sluggish feel of the Cover Story is caused by the resistive touchscreen, but it’s actually surprisingly sensitive. There’s a slight wait before a press is sensed, and another before the interface gears clunk into place to take you where you want to go, but only a very light press is required.


The touchscreen layer has an unfortunate side-effect – it’s much more reflective than the E-Ink screen itself, so reflections appear on the screen almost as clearly as on an LCD. This is a significant drawback when use in direct sunlight is one of the key bonuses of an E-Ink device. The touch layer also seems to rob text of some its clarity. Contrast is reasonable – slightly below that of the third-generation Kindle or Sony’s latest Reader devices – but you can tell you’re viewing the screen through an additional layer of plastic, especially if a light source is causing some reflection issues. 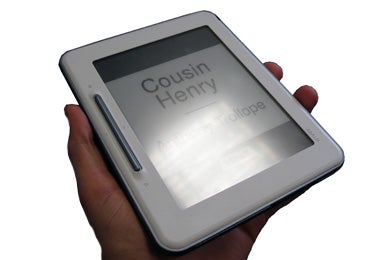 The 6in screen uses an 800×600 pixel display, the same specs seen all of today’s top-end ereaders, but isn’t as sharp as the latest Sony Reader models, especially the higher pixel density pocket-sized PRS-350. Dithering is available to smooth-out text a little, improving performance over early devices like the Sony Reader PRS-505, but not by a great deal. Text is still extremely easy-to-read though, our main sticking point being the disappointingly reflective screen.


When mid-read, the rocker also doubles as the main navigational tool – over and above simply changing pages. The two ends of the controller work as home and back buttons, letting you skip back to the main menu easily. The touchscreen also comes into play. Holding a finger down on a word brings up the dictionary entry for the word at the bottom of the screen, a single tap in the middle of the screen summons the menu and a tap towards each side of the screen flicks over a page. Within the menu, you can change font size, make notes using the touchscreen, take a snapshot, set a bookmark or browse manually through the dictionary – the Oxford Advanced Learner’s Dictionary in this case. It’s an impressive set of features, but one that’s tarnished by the Cover Story’s sluggish performance. It’s thoroughly outshone by the toucshcreen Sony PRS-350, which offers similar features but is snappier and also offers additional translation dictionaries. The smaller PRS-350 is more expensive though.

The Wi-Fi edition of the iRiver Cover Story offers two main features over its non-connected sibling – Waterstones Bookstore access and e-mail. This bookstore offers tens of thousands of books, rather than the hundreds of thousands available from Kindle, but the ereader also supports ePub, PDF and txt files. ePub support gives you access to the Project Gutenberg library of public domain works, and plenty of other ebook resources that the Kindle would struggle with. 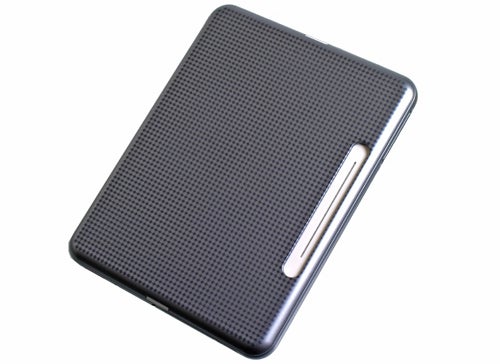 Unless you’re going to fashion your own ebook library outside of the device itself though, the Kindle is a much simpler, better-integrated proposition. The Waterstones ebook store also uses DRM that requires you to “activate” the Cover Story by linking it with an existing Adobe DRM account. The book store also lacks the many freebie books you’ll find in the Kindle store, making it an all-round less welcoming place to browse around.


The e-mail feature is similarly limited. We had no problems logging into a Gmail account, and you can add multiple accounts to the ereader, but you won’t be able to view attachments and there’s no support for threaded conversations. As a last minute extra feature, it’s a nice addition but not one that should figure into your buying decision – most phones are much better at picking up emails than the Cover Story.

The magnetised cover, friendly-looking design, touchscreen and built-in dictionary help to differentiate the iRiver Cover Story from its many rivals. But where the current Amazon and Sony devices have been perfected over several years and several iterations, the Cover Story could do with a month or two back in the design studio. The reflective screen and unpowered CPU trip up what is otherwise a cute-looking, fully features product. 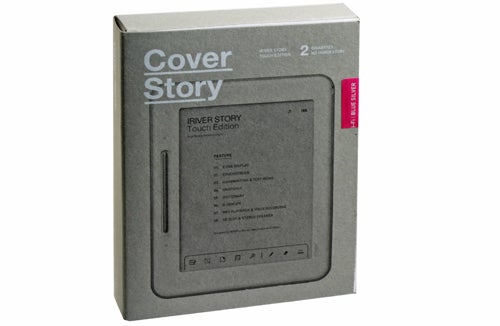 For a hundred pounds, you get a lot, but the Kindle is much more pleasurable to use – and if you’re after a less closed-off device, the more-expensive Sony PRS-600 has a better screen and interface. If you must keep under the hundred pound mark though, the iRiver Cover Story offers a much better experience than the various LCD-screened quasi-ereaders littering the market.


The iRiver Cover Story EB05W packs in loads of features, with Wi-Fi, expandable memory, a magnetised cover and a touchscreen, but performance issues stop it from challenging the top eReaders. It’s very keenly priced, available at Â£99.99, but screen reflection issues and slow navigation dilute some of the best bits of an eReader. Still, we’d pick this over an LCD-screen model any day.