In a hundred years time, if there was one object that might represent the Western world of the early 21st century the iPod would be a strong contender. Once merely a music player it’s become the ‘must-have’ fashion accessory of the moment. And even with its increased ubiquity as sales continue to rise there’s no backlash yet it sight.


So far at TrustedReviews we’ve looked at a third-gen model, the iPod shuffle and the iPod photo. Now due to some recent improvements we’ve taken the time to gaze upon the lovely smooth curves of an iPod mini. 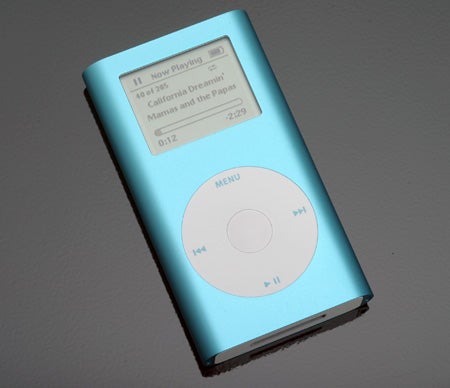 Introducing the mini was certainly a very smart move by Apple and the player could be seen as the most important of the entire iPod family. By moving from a 1.8inch hard drive to a 1in drive, Apple was able to shrink down the already svelte iPod to an irresistibly cute, pocketable size package. By doing this it opened up the iPod to a whole range of listeners, such as girls and accountants, to whom having a tiny, cool looking MP3 player was far more important than being able to carry round their entire music collection.


The original mini introduced the click wheel which integrated the four navigation buttons of the third gen model, later adopted by the 4th-gen iPod and the iPod photo. While the original sported a 4Gb hard disk, the mini’s competitors such as Creative’s Zen Micro and the iRiver H10 responded by putting 5GB hard disks. Now Apple has hit back by leapfrogging them with a 6GB drive, only for Creative to respond again with 6GB Zen Micro. 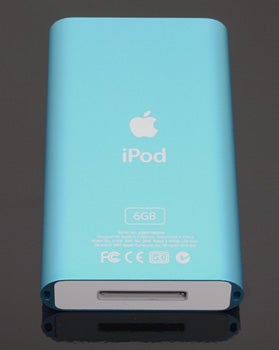 However, big news is how effectively Apple has dealt with the mini’s biggest failing – the rather feeble battery life. Thanks to making use of a new more efficient chipset from PortalPlayer, the mini now boasts a very impressive claimed battery-life of 18 hours – a lot better than the eight hours of the original. This figure is based upon playback of 128Kpbs AAC files, which is a lot more realistic than the 48Kpbs figure used by Sony. Higher bit-rates will lower battery life due to increased CPU usage, but the figure is still very impressive. (Update – under our testing we obtained over 22 hours of continuous playback).


The other change is that Apple retired the ‘bling’ Gold coloured mini, while changing the shade of the remaining colours. Our review sample is a rather lovely blue colour but you can also get silver, green and pink. 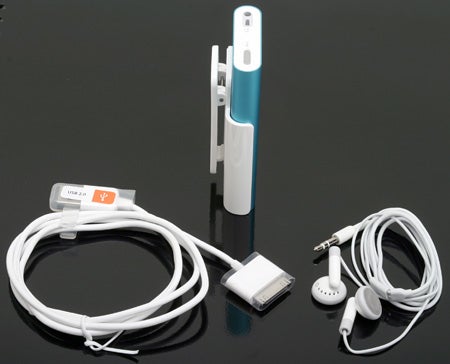 The packaging for the mini is as lovely as ever from Apple. The box lid slides off to reveal the mini wrapped in plastic. The box underneath is split in two halves – one for the install discs and one for the headphones, USB cable, and a belt clip holder. As with all the new iPods there’s no Firewire cable, no dock connector no remote, – but all are available as optional extras. There’s no AC adaptor either, so you can only charge when connected to the PC.

What was unexpected when listening to the iPod mini was that it sounded fantastic. After comparison with my third-gen iPod, there was definitely a superior level of clarity on the iPod mini, as if it were capable of better frequency response. Indeed by comparison iPod sounded relatively muffled. 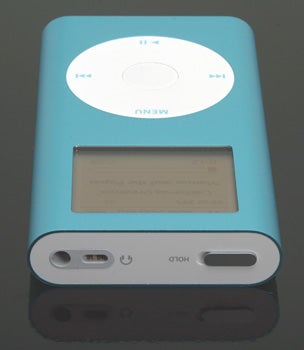 What it all boils down to is that the iPod mini is a lovely player. One day of course, a 20GB iPod will be this size, but for now six gigs is your limit. At this capacity it no longer loses out to the Zen and H10, but while Creative and iRiver have both worked hard on improving the look and usability of their players, the mini is still miles ahead. With its rounded sides and neat click wheel interface, it really does look the part of the cool fashion accessory. It feels just right in the hand and the click wheel interface still hasn’t been bettered. It also sounds better than previous hard disk based iPods. Furthermore, now that the battery life has been so significantly improved it’s very hard not to love the second-gen mini. 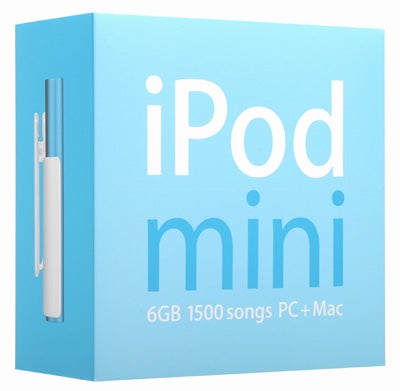 There are missing features that might give pause for thought, such as a built-in radio, recording function and microphone. But if it’s just a player you want these issues fall by the way-side. For me the only reason I wouldn’t want one is that I do want to carry my entire music collection around with me. Or at least more of it than I could fit on a 6GB drive.


The good news is that Apple is still offering a 4GB version, with all the benefits of extended battery life, at an affordable £139. So if your main aim in owning a mini is to look trendy, the cheaper 4GB version could be the way to go.


With the new iPod mini, Apple has increased its capacity by a third, battery-life by two-and-a-half times and improved sound quality. It’s a pretty impressive triple whammy and as long as its capacity is large enough for you, the iPod mini would be our recommended digital audio player.