The iPhone SE runs Apple’s latest iOS 9 operating system. Anyone familiar with an iPhone or iPad will get to grips with it in seconds, and it won’t take much longer for first-timers.

Some might say it’s too restrictive, that you can’t customise an iPhone anywhere near as much as an Android or even Windows phone. There are no widgets for your homepages, nor a manual mode for the camera – it’s all kept simple and light. 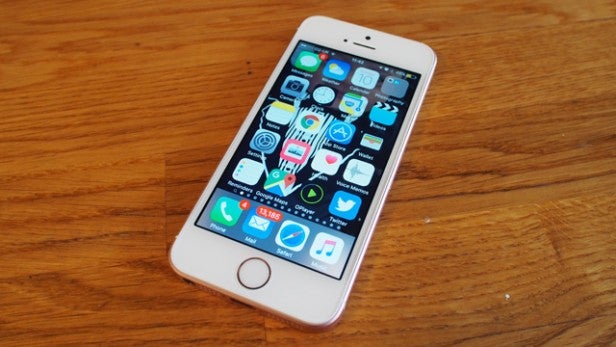 I don’t find it much of a problem. The older and busier I get, the more I appreciate the fact that I don’t have to tinker too much to get a slick experience or great results. iOS 9.3 works, and it works well right out of the box.

It also comes with a few cool new features. One of the highlights is Night Shift. Turn this on and the iPhone SE’s display changes colour tone, removing a lot of the blue light and becoming much warmer. There’s a good reason for this. The blue light that electronic screens emit trick the body into thinking it’s still daylight and makes getting a good night’s sleep harder. Night Shift helps to stop that. 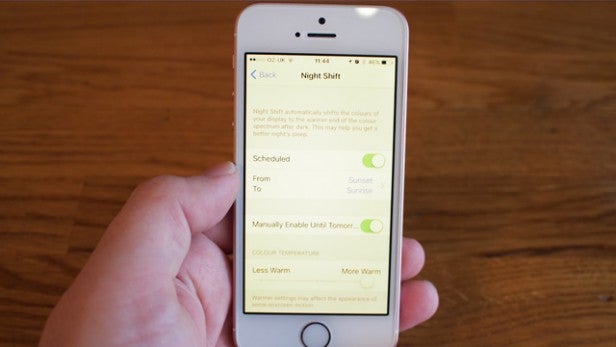 The Apple App Store is also still the one to beat. It’s packed full of high-quality apps and games that make the most out of the iPhone SE.

The iPhone SE also comes with an NFC chip you can use with Apple Pay. That means you can hand over your money simply by holding your phone to a tap-and-pay terminal and using the Touch ID fingerprint sensor that’s built into the home button. But it only works if your bank and country participates in the program, so best to check before you get too excited about that feature.

A dual-core A9 processor and 2GB of RAM might not sound like much when compared to top-flight Android phones, but the iPhone SE is one of the most powerful handsets you can get right now.

It blitzes our like-for-like benchmark tests with results that are almost identical to those from the iPhone 6S, but because the screen resolution is so much lower it actually tests better on some hardcore gaming tests.

There’s an incredible amount of processing muscle in the iPhone SE’s diminutive frame and it doesn’t get too hot or bothered by all that horsepower either. Touch ID also unlocks your phone more quickly than it does on the iPhone 5S thanks to the new processor. 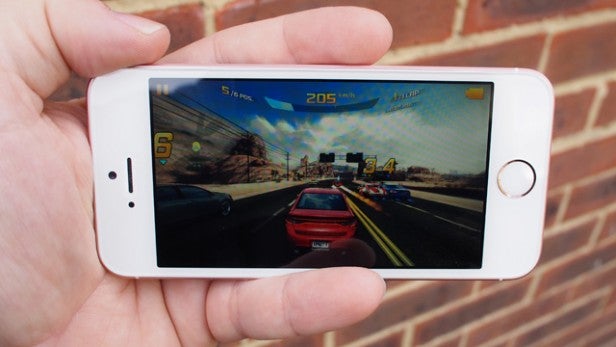 The A9 processor offers more than an incredibly fast and smooth experience; it also helps the iPhone SE keep going for longer. Efficiency improvements mean the A9 uses less of the iPhone SE’s battery and the M9 co-processor helps reduce power drain when the SE is immobile or out of signal.

It’s clever stuff and means the SE lasts a good long while for such a small phone.

Performance may be identical to that of the 6S, but there is one feature lacking on the iPhone SE – 3D Touch, which lets you access additional features by pressing harder on the 6S’s screen. Ironically it’s a bit like a right mouse click, which is something Apple computers don’t have. It’s a useful feature, but not one that I particularly miss when it’s not there.

More problematic is Apple’s continued insistence that 16GB of storage is enough for an entry-level phone these days. It isn’t, particularly when you can’t add extra storage via a microSD card. Thankfully the iPhone SE also comes in a 64GB configuration, which is the one I’d recommend, even though it is a lot more expensive.